Have you ever had Avid Media Composer hang upon startup? If not then someday you probably will. Depending on what may be causing the issue a little investigative work might solve the problem. I’ve been using version 8.5 for awhile now (even kicking the tires on it when it came out) but an update to version 8.5.1 caused the dreaded beach-ball upon launch. The launch screen would just sit there and the beach-ball would spin and spin and spin. The clue came when looking at the bottom of the launch screen as Media Composer loads its many components it needs to run. It would hang on Initialize AVX2 Host. AVX is Avid’s plug-in architecture and some internet searching revealed that it might be an incompatible plug-in. Why a plug-in would be working on version 8.5 and not on 8.5.1 is beyond me but we want to just fix it. Turns out it’s probably OS related. 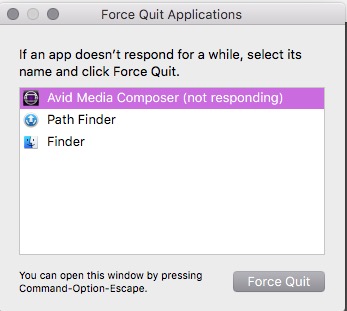 This is not what you want to see when you go to launch your NLE. Turns out it’s not Avid’s fault.

They key is to find and remove the AVX plug-ins and then add them back, one by one, while Media Composer isn’t running until you find the one that is causing the hang up. It’s entirely possible that Media Composer would eventually pass the Initalize AVX2 Host stage and load but after 10 minutes I gave up. Here’s how I fixed it and found the problem. 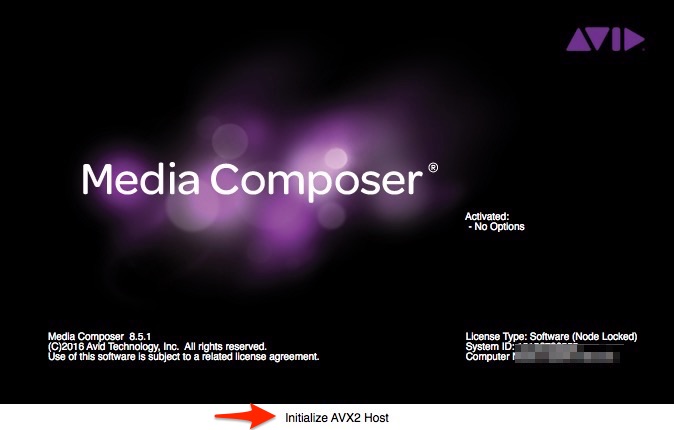 The first step was to locate the AVX2_Plug-ins folder. On the Mac it is located here: /Library/Application Support/Avid/AVX2_Plug-ins/.

I then moved all those plug-ins to a folder on my desktop called “removed AVX.”

First I added back the Avid created plug-ins as my guess was they would run. And they did, Media Composer booted quickly. 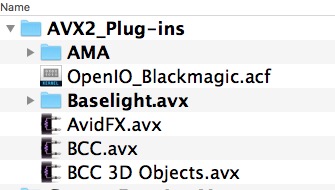 I then added back a few of the more current plug-ins like Boris Continuum Complete, Baselight and the Blackmagic drivers. Everything booted and worked fine.

After that I added, one at a time, the NewBlue plug-in (since New Blue Titler is bundled with MC I would have expected it to work) and Tiffen Dfx. 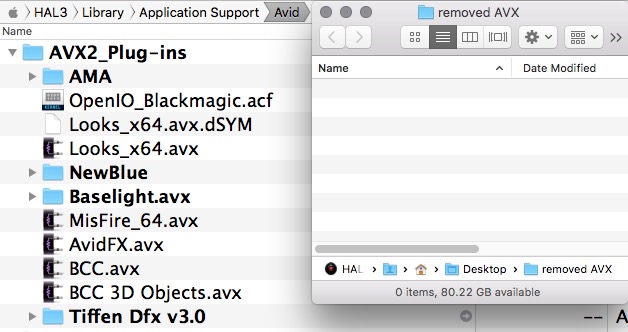 After that it was only Magic Bullet stuff left so I put them in next.

And no go … Media Composer would beach-ball upon launch.

I then re-removed the Magic Bullet Looks avx plug-ins and restarted Media Composer.

Everything worked after that so the problem was Magic Bullet Looks.

It’s worth keeping tabs on third party plug-ins and what versions of the software and the OS they support. Come to find out that Magic Bullet Looks doesn’t support Media Composer 8.5 on Mac OS 10.11. Like a good developer Red Giant is testing their tools with all kinds of versions of hosts and OSes to ensure compatibility. An update will most likely fix the issue at some point.

This isn’t to pick on Red Giant but rather show a way to possibly find a solution. This technique of isolating problem plug-ins can go a long way when troubleshooting things besides plugins on launch. Recently I had an Adobe Premiere Pro timeline that would crash on export. I thought I’d try to figure that out via rendering and the render would fail as well. So I tried to render the timeline in different parts until I found a section that would fail on render. I kept rendering smaller and smaller sections until I found a single shot that would not render. It appeared to be a corrupted media file. I replaced that shot and it exported fine.

That’s a good troubleshooting technique to know. Isolate half a problem, continue to isolate halves and pieces until you narrow the problems down to a single element.