Yes, we’ve all heard it before: video editing is a complex task, no matter how much different companies try to make it easy. Simon Says says it has a solution to make it simple: Simon Says Assemble. 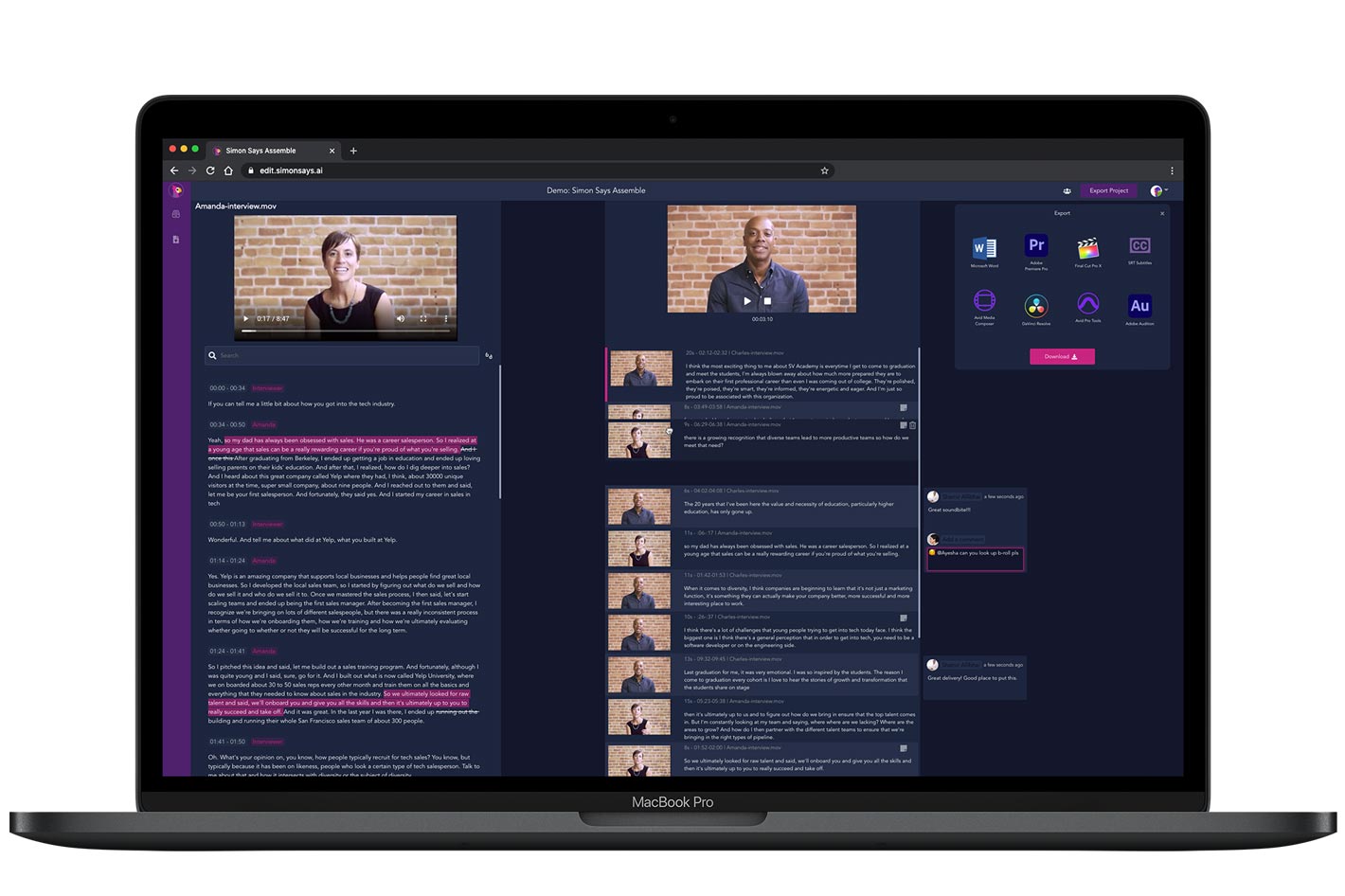 According to the information made available by the company, Assemble enables production teams and clients to quickly and easily lock story from the web. Import and transcribe interview footage and dailies; highlight the key soundbites in the transcript; then easily drag and drop the soundbite text into the desired sequence to create the spine of the story. Share, annotate, and sign off in one flow.

With story locked, the editor can export to their preferred NLE – Adobe Premiere Pro, Avid Media Composer, Apple Final Cut Pro, and DaVinci Resolve – where the XML auto-magically re-creates the assembled timeline and seamlessly relinks the media at the correct in and out points. Eliminated is the tedium of scrubbing through audio to find a soundbite, flipping between highlights on a transcript, implementing edit notes, and the back-and-forth of endless exports trying to get signoff. With Simon Says Assemble, the editor is liberated to do what she does best: focus on shot selections, pacing, music, and all the creative elements that bring a story to life. 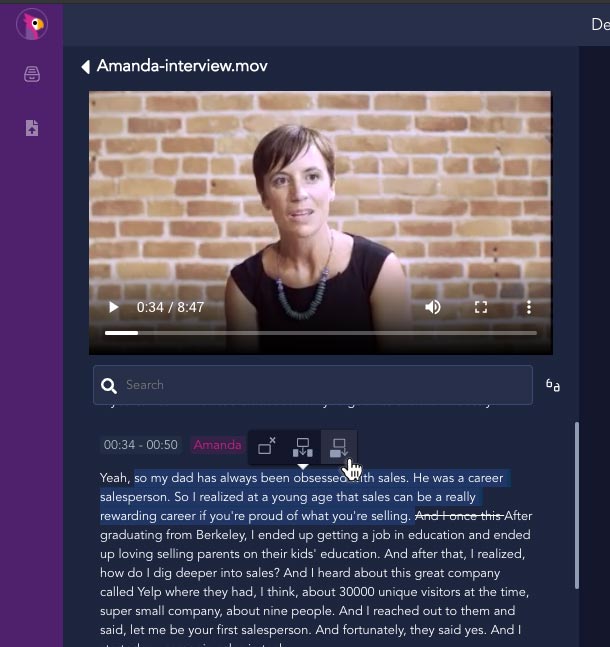 Push forward the boundaries of storytelling

“Teams can now edit, discuss, and sign-off on rough cuts from the web as simply as editing text,” comments Shamir Allibhai, founder and CEO of Simon Says. “Transcription was the stepping stone to Simon Says Assemble, which empowers everyone involved in a project to find and order the meaningful parts of the video to create an impactful narrative. Assemble brings down technical and cost barriers and frees the story from the silos of an NLE.”

Shamir adds: “I deeply believe in video tech that increases simplicity and efficiency and that when you enable that, you bring in more creators, with their own unique voices, who will push forward the boundaries of storytelling and even the craft itself. Simon Says is grateful to be a part of the workflows of tens of thousands of the most indomitable creative teams on the planet.” 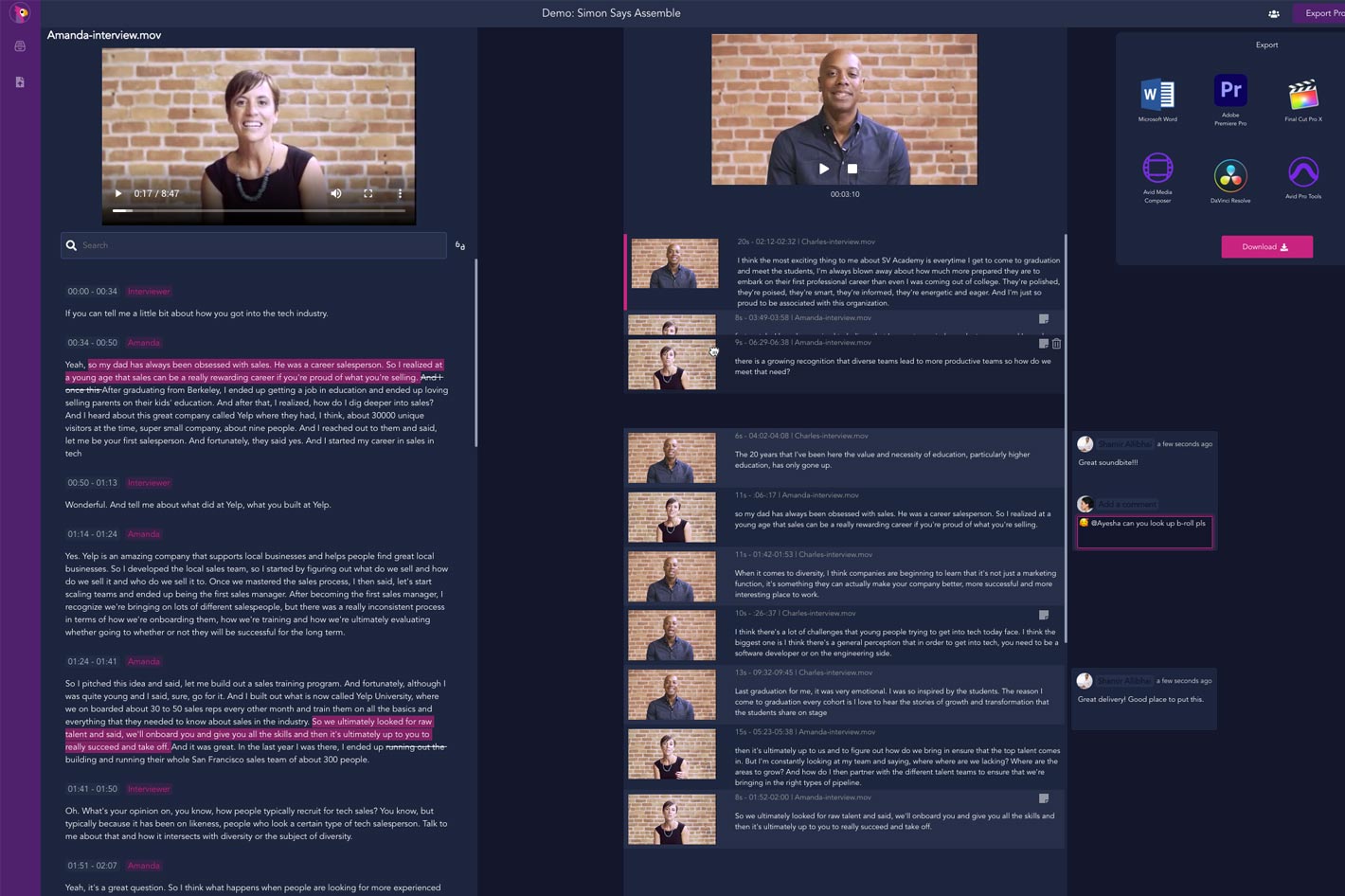 The tool for the modern-day video creative

Want a real-world example? Damien LeVeck, owner/producer of Skubalon, Inc. and production partner with major networks including CBS, ABC and NBC, is currently using Simon Says for a documentary chronicling the history of skateboarding, starring the biggest names in the sport. He comments, “Transcription is an invaluable part of any unscripted or documentary workflow. And, as budgets contract, the need for affordable solutions becomes greater. Simon Says is the perfect AI transcription service, not only because of the quality of transcription and low cost, but also because it offers the widest array of integrations with editing applications.”

He adds, “The recent addition of Simon Says Assemble further streamlines our workflow, allowing our team to send stringouts and radio cuts to editors faster, which enables quicker turnaround on tight deadlines. It’s further proof that Simon Says gets better and better by the day.”

The company believes that Simon Says Assemble is the tool for the modern-day video creative. It’s a solution designed to empower today’s visual storyteller, from the one-man-band to production companies, from corporate teams to agencies working with demanding clients, and everyone in between. Simon Says Assemble is ideal for the following scenarios:

See Simon Says Assemble in action or test it out firsthand. To get started, go to simonsays.ai and sign up, transcribe your media (free credit to new users), go into Video Assemble mode, and start cutting! Existing Simon Says users have immediate access to Assemble via their dashboard, giving them even more power. 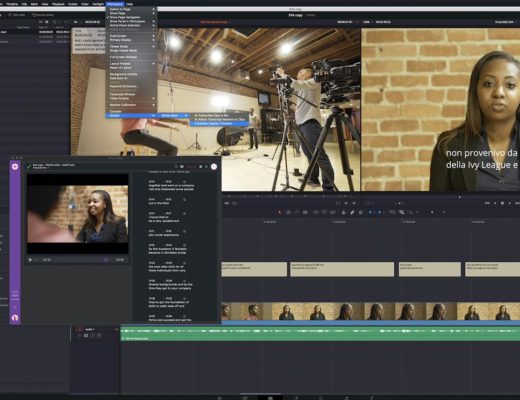 With Simon Says you can transcribe, translate and edit clips and captions with in sync frame-accurate video and text... 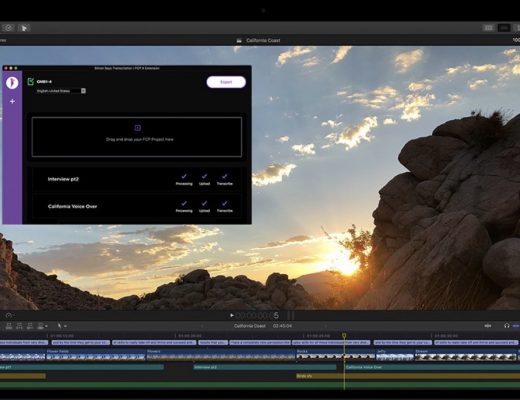 The recent release of Final Cut Pro X added workflow extensions as covered here on ProVideo Coalition. One of the...