Here’s a vintage —yet still available— palindromic Shure microphone that in many modern situations beats the newer SM57 thanks to its switchable impedance. 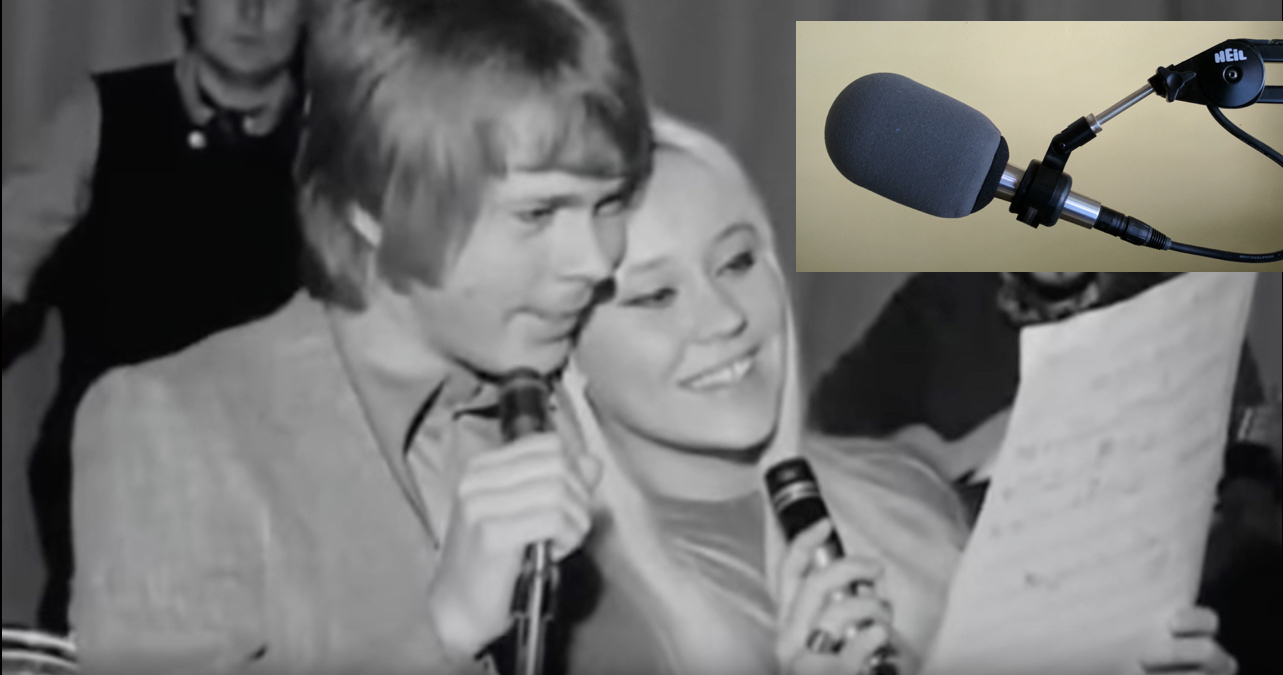 Six years before Shure released the ubiquitous SM57 dynamic microphone in 1965, the company began to sell its palindromic predecessor, the model 545. Although the 545 is much less prominent, it is still available today. Above you’ll see a rare monochrome image of Agnetha Fältskog of the Swedish palindromic ABBA group holding the 545 palindromic microphone. In this article, I’ll explain why one of the 545’s unique features makes it more practical today more than ever in certain situations, compared to the slightly more costly SM57 or SM58, and sometimes even to the much more costly SM7B. I’ll include test recordings and clarify the concept of impedance, especially with dynamic mics.

Here is the Wikipedia definition of electrical impedance, and I agree with it.

Electrical impedance is the measure of the opposition that a circuit presents to a current when a voltage is applied. In quantitative terms, it is the complex ratio of the voltage to the current in an alternating current (AC) circuit. Impedance extends the concept of resistance to AC circuits, and possesses both magnitude and phase, unlike resistance, which has only magnitude. When a circuit is driven with direct current (DC), there is no distinction between impedance and resistance; the latter can be thought of as impedance with zero phase angle.

Components in audio, video and RF (radio frequency) systems have a rated impedance. Back in the analog days of video, standard impedance was 75Ω (ohms). If we needed to loop (chain) a signal, we would leave all devices to high impedance except the last one, where would we “terminate” it in 75Ω. Todays SDI is also 75Ω. All television RF systems I have ever dealt with have had a 75Ω impedance with round, unbalanced cabling or a 300Ω with flat balanced cabling, while the CB (citizens band) radio I’ve dealt with had 52Ω. Audio is much more variable, as covered in the rest of this article.

What output impedance ratings do most dynamic balanced microphones have?

Here are some examples of dynamic balanced microphones I have covered over the past few years here in ProVideo Coalition magazine, together with their published output impedance:

All listed above are considered “low impedance”. On the other hand, the current version of the Shure palindromic 545 (which is the main focus of this article) has switchable impedance. It is factory set to 150Ω (250Ω actual), and is jumper-switchable to high impedance. You’ll find details about that ahead in this article.

The above list excludes the digital-only mics I have covered, and those dynamic balanced ones where the manufacturer doesn’t publish the impedance.

What output impedance inputs were common in mixers and recorders back when many classic dynamic mics were designed?

Back when the classic dynamic microphones were being designed, many preamp inputs in mixers and recorders had 600Ω input impedance.

What impedance inputs are common in mixers and recorders nowadays?

Nowadays, the inputs are very often very high impedance. For example, the MixPre-D mixer from Sound Devices has a 2kΩ (2000Ω) impedance on the XLR inputs when they are set for a microphone source. The XLR inputs on the Behringer/Midas X Air 12 have a 5kΩ (5000Ω) for balanced microphones or 10kΩ (10,000Ω) if used with unbalanced ones. The mic inputs on the MixPre-D mixer are transformer balanced, while the ones on the X AIR 12 I believe are electronically balanced. More about that ahead in this article. The point of this section is to underline that many balanced microphone inputs nowadays are very high impedance, although a few high-end ones have come out with variable input impedance.

What happens when you have a high ratio impedance mismatch with a dynamic microphone?

First of all, the impedance were never intended to match the preamp exactly. However, vintage dynamic microphones in the low impedance range listed above were intended to be within the range, i.e. a dynamic mic between 150Ω and 600Ω with a 600Ω input would be well within range. However, they really weren’t expected to be used with an input impedance that would be 4x and 6x higher the expected approximately 600Ω. This certainly doesn’t mean that they won’t work. They work fine, but their tone will vary, as explained further ahead. But before continuing with the impedance matching issues, I’ll introduce you to Matt Rygelski, who will demonstrate how the enormous A81WS windscreen from Shure sonically transforms a US$99 SM57 to sound and behave like a US$399 SM7B, but without being so demanding on the preamp.

In the above video, Matt Rygelski demonstrates that the SM57 combined with the enormous A81WS windscreen from Shure sonically transforms the SM57 and makes it sound virtually the same as the much more costly SM7B, at a fraction of the cost, and without demanding a preamplifier that costs much more than the SM7B itself. Matt Rygelski explains that part of the sonic transformation is due to the sound waves being affected by the A81WS’s unique material, and that the other detail is —like the cage in the SM7B—, the extremely thick material in the A81WS forces the person speaking to maintain an ideal minimum distance. Both the SM57 and the SM7B are low impedance dynamic microphones… and most preamps nowadays have very high impedance inputs. As explained earlier, that means that the dynamic mics don’t sound exactly as they were intended when the were first designed. We could certainly add what we survivors from the analog video age called a terminator (terminating resistor), as suggested by Paul Stamler in his article Shure SM57 Impedance Modification in RecordingMag. However, that’s a lot of extra work, hassle and expense. since you have to buy a resistor, soldering iron and be skillful at that art (or find a friend who is) to take apart an XLR plug and modify it. Wouldn’t it be nice if Shure only offered a microphone virtually identical to the SM57, with the capability of switching the desired impedance on-the-fly by simply moving a jumper…? Well I have good news for you: Even though it pre-existed the SM57 by five years, that microphone does indeed exist; it’s still available for sale today, and it’s even palindromic!

Five key differences between the SM57 and the 545

The SM57 and the 545 have many more similarities than differences. Here are five areas where they differ:

On multiple online stores where I have researched, the 545 is filled with rave reviews from purchasers. Both with the SM57 and the 545, there is much speculation about the quality after Shure moved its manufacturing from the US to México and China. Some people say the Shure microphones manufactured out of the US don’t sound as good as the older ones made in the US. Others contradict that statement, and say they still sound the same. Many people have written that the 545 sounds the same as the SM57, and some have even written that the 545 sounds better than the SM57. Although those people didn’t realize why, perhaps the 545 sounded better because it had a better impedance match. Hmmm…

My tests with the palindromic 545 and the enormous A81WS windscreen

Above is the Shure 545 with the enormous A81WS windscreen, mounted in the A55M ShockStopper Mic Clip (aka shockmount) on Heil’s PL–2T overhead boom.

The above tests were recorded using the Shure palindromic 545 microphone, 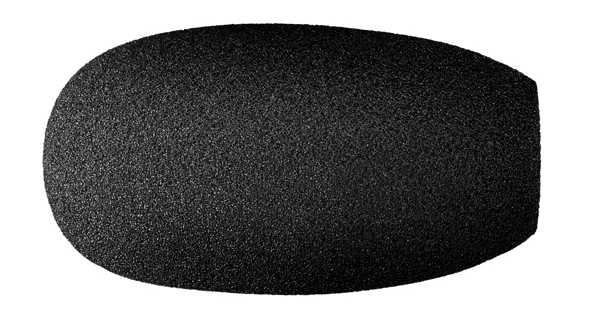 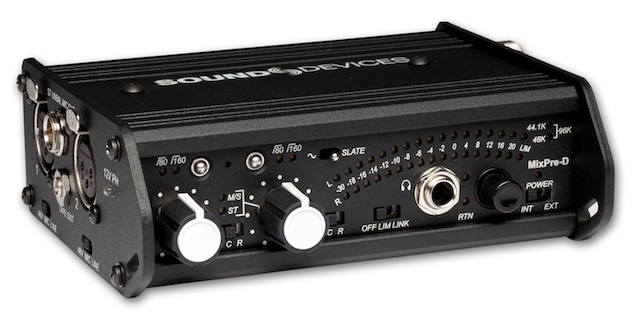 The 545 was connected to the preamp of the MixPre-D from Sound Devices (shown above, first reviewed here), with low cut filter active.

Situations when setting the mic to high impedance at the source isn’t the best solution, even that’s what would best work with your preamp

In any of those cases, it’s better to leave the microphone at low impedance, and use a transformer/adaptor at the preamp input, which effectively adds a transformer balanced input and also solves the impedance issue in a single swoop, like resuscitating two birds with a single defibrillator.

Above you’ll see the Shure A85F, a transformer that allows you to match the low impedance microphone source —even after a long distance or when you have lot’s of EMF or EFI— to an input that is very high impedance and especially if it doesn’t use a transformer, but employs electronic balancing.

Conclusions and your opinion

If you already have a different dynamic microphone that you love, there is no reason to buy a new one. As indicated in the article, there are other ways to accomplish the impedance matching if desired. However, if you don’t really like the dynamic microphone you have, or don’t yet have one at all, and you liked the sound and the look of it, you may consider the palindromic 545 from Shure, especially combined with the enormous A81WS windscreen and mounted in Shure’s A55M ShockStopper Mic Clip, aka shockmount. Please comment below as to how it sounded to you, and whether it sounded better to you with part 1 (set to low impedance) or part 2 (set to high impedance).