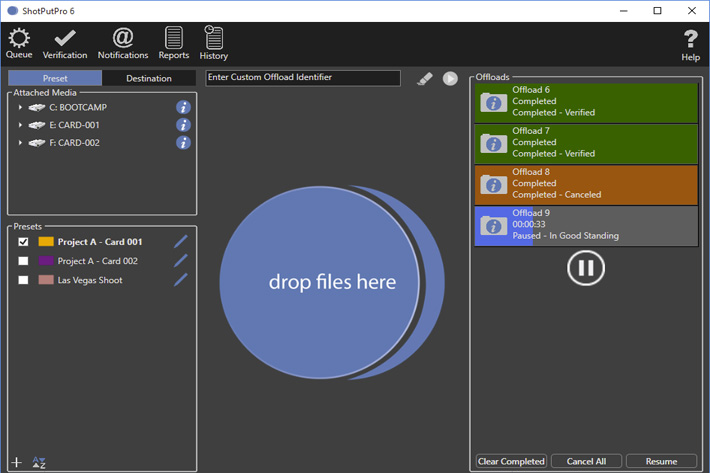 The counterpart to the Mac version released last August, ShotPut Pro 6 for Windows offers a completely new user interface, significantly faster media offloading, and many other new or improved features.

Imagine Products, creator of software utilities for backing up, viewing, sharing, transcoding, and archiving video assets, announced recently the launch of ShotPut Pro 6 for Windows.The new version features a completely new user interface, offers significantly faster media offloading, and many other new or improved features that give users much more control over their offloads, not only compared to ShotPut Pro 5, claims the company, “but to any other offloading application on the market.”

“Since ShotPut Pro 6 for Mac became available, it has been incredibly well-received by the media-management community. It is truly the most feature-rich application we’ve ever created and the most robust offloading application out there. Now Windows users will have the same new user interface and the same powerful new features and functionality as their Mac-using colleagues,” said Michelle Maddox, marketing director at Imagine Products. “We collaborated closely with our customers to be sure we retained all the superior features in previous versions of ShotPut Pro, while modifying it to include things they most wanted to see in an offloading program. The result is powerful yet affordable software that makes users’ jobs easier, even in the most challenging situations.”

Designed for digital imaging technicians (DITs), data wranglers, postproduction professionals, and anyone else needing to offload media files quickly and securely with checksums, ShotPut Pro 6 boasts dramatically increased offload speeds over its predecessor. The software now offers desktop notifications in addition to email and text notifications, the ability to pause and resume offloads even when hard drives have been detached for multiple hours, and the capability to cancel all or some offloads.

New reporting features include the addition of detailed PDF reports with four thumbnails from more than 20 different camera formats, robust naming conventions, and the ability to create and nest multiple folders within that naming structure — features that work with any digital files to copy them securely whether they are small or large. In addition, Imagine Products has improved the process of offloading multiple files to multiple locations and bundling offloads from different locations to one destination. With the offload sequence feature, ShotPut Pro 6 offers cascading offloading with a choice between having all offloads working at once or working one at a time.

One major change that is likely to please ShotPut Pro 5 users is the new version’s completely redesigned look and feel, including a much more intuitive interface. Presets are now color-coded and can be exported and shared with other ShotPut Pro users to ensure consistent naming conventions. An at-a-glance progress window indicates when files are offloading, verifying (checksum), and ready to go, and the checksum function now includes xxHash. Users can easily see if an error has occurred or if offloads have been paused or cancelled. Given the extent of the overhaul, the new interface is more than just a facelift to ShotPut Pro 5; it’s more like a whole new product that was built upon the success of its predecessor.

In a boon for organizations with multiple seats of software, ShotPut Pro 6 uses Imagine Products’ new account-based activation system, which has already proven successful in other Imagine Products applications. Individual serial numbers are no longer needed, and users can see which computers are actively using the software and manage them remotely.