Many times a day an editor wants to duplicate a cut to a new version and keep working on the duplicate. Many.

How often have you been working in Adobe Premiere Pro and you duplicated a sequence into a new version only to forget to load that new copy into the timeline? So you continue editing on your old version only to discover the mistake many cuts later?

If you’ve never done that then you’re a better editor than most of us. I did it often enough that I began using a system where the Copy 03 sequence that PPro creates is the backup and I continue working on the currently loaded sequence.

That little snafu can be a thing of the past with this cool little extension created by Australian editor and colorist Julien Chichignoud.

That little DUPLICATE SEQUENCE +1 button above adds one of Adobe Premiere Pro’s most needed “little features” in that with a single click it will duplicate your sequence into a new version, load that new version into the timeline panel and tuck the old version away into it’s own archive bin. This is possible via Adobe’s Extension architecture that allows third parties to create tools to extend Premiere’s functionality. Though limited in what it can do (there’s no keyboard shortcut for these buttons so you have to click) this extension architecture allows for some nice upgrades above what Adobe had built into PPro. It can be something internal and simple like this duplication tool, something that interacts with an online service like Frame.io or something as complex as Digital Anarchy’s Transcriptive (see my review here).

These are the instructions straight from Julien’s GitHub webpage where the extension is available.

Yep, the operation of Sequence Duplicate +1 is quite simple. 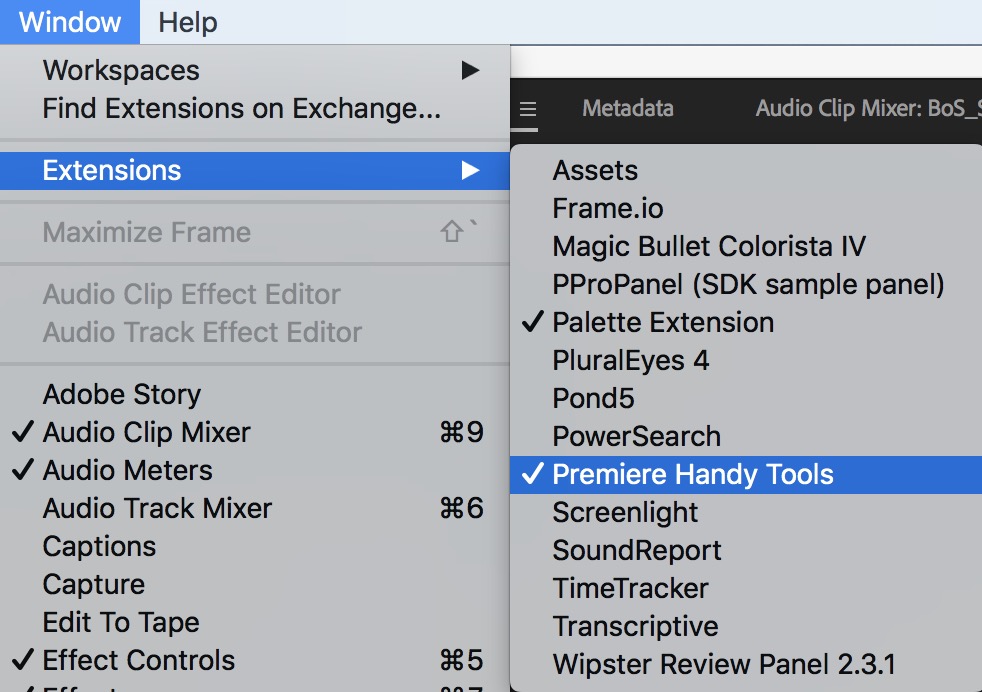 This opens into its own panel. That panel has a few buttons you can click. I’ve been keeping mine tucked under the audio meters. 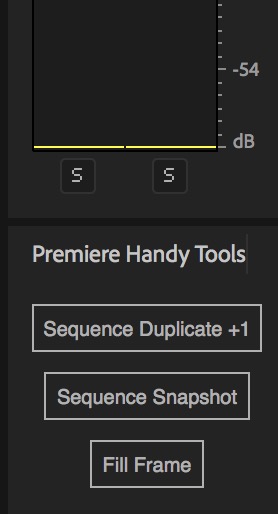 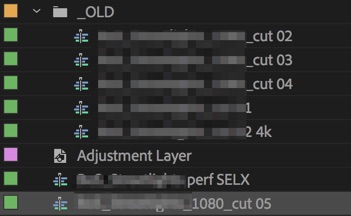 When clicked, Premiere will duplicate the sequence with a new version number, move the old sequence into a folder called _OLD and, most importantly, load that NEW SEQUENCE into a tab in the Timeline panel.

The panel also includes a few other handy features as well.

Sequence Snapshot  is another great little button that will create a duplicate of your current edit and before saving a dated version of that into a _SNAPSHOTS folder you can enter some info about that cut that will appear in the Description metadata column.

We talked about this on Twitter the other day and Julien showed that feature.

Not yet on GitHub but I added another similar script to take a "snapshot" along with a comment. All in a simple panel pic.twitter.com/WryuMytN5E

That version is the one on GitHub now. Julien has updated the extension a bit since that Twitter screen grab above.

Fill Frame is an upgrade to the Set to Frame Size will scale to remove letter or pillar boxing which is what you want to do anyway.

Every now and then the _OLD and _SNAPSHOTS feature seems to get confused especially if you’ve moved sequences around in the bin or something so it might make a duplicate of those folders. You might have to manually clean it up. But it’s free so take the bad with the good.

Installing is the tricky part

As mentioned these extensions are located on GitHub and installing them can be the tricky part. You have to manually add the extension deep into a system folder in your OS. You’ll probably also have to Enable loading of unsigned panels before you can use it and that requires a Terminal command on the Mac and a registry change on Windows. Those instructions can be found here and Julien links to all of this in his GitHub page as well.

Since this installation isn’t a straight forward installer and you have to jump through a few system hoops I think this disclaimer is in order: install this Adobe Premiere Pro Extension at your own risk. Backup your critical production machine before performing any system tweaks.

I’ve installed it successfully on two different machines of my own and have been happily duplicating away!

Thanks to Julien for coming up with this little hack. Admittedly he’s not a programmer and came up with these on his own, as a hobby. I love it when an editor builds their own tools to make their life easier and shares it with the rest of us. If you’re on Facebook give a look to the Adobe Pro Video User Group – Australia where Julien posts most of his stuff. And if you do conforms from Adobe Premiere Pro to Resolve Julien has a little script that might help with that too!

This all came about after a Twitter conversation about some missing Adobe Premiere Pro features.

I’ll one up that…. CMD/CTRL D when you’re in the timeline or program panel and getting that sequence duplicated, version # incremented and that new version automatically loaded into the timeline!! Ala Avid. https://t.co/1rOv5VAAvz

And what does an extension like this look like as far as the computer-code goes? Looks like greek to me but it’s cool to see I suppose! Bart does know his stuff.

The script is done, but I need to wrap it with an extension panel and I’m leaving for holidays tomorrow. So… not sure when and where. pic.twitter.com/hZwDmc64Vf

Covid-19 and the year 2020 have turned the professional production and post world on their heads. Among other things,...

After all these years of using Adobe Premiere Pro I still can’t remember what exact color Cerulean is when I go...