Sanyo shows its willingness to stretch the limits of format recordability. 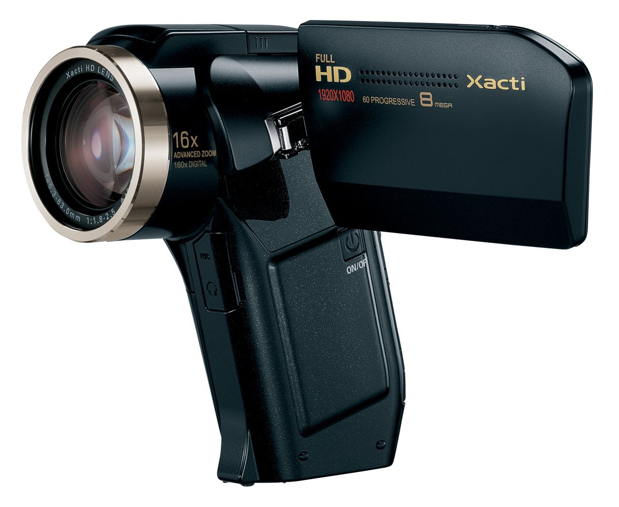 At the dawn of affordable professional HD video camcorders, JVC first offered recording only to 720p, Sony first offered only 1080i recording, and Panasonic offered recording to either of the above (even though its original sensors had a native resolution of 960×540, so any HD recording was interpolated). Nowadays, many of the latest offerings from the pro divisions of JVC, Panasonic, and Sony embrace the option of recording 720p, 1080i, or 1080p in a single camera. However, because the maximum framerate available with 1080p in these affordable professional HD video camcorders has been limited to 29.97p, those producers who favor progressive production have faced a tradeoff: either favor spatial resolution (1920×1080 at a maximum of 29.97p, for ultra sharpness and less smoothness) or favor temporal resolution (1280×720 at a maximum of 59.94p, for ultra smoothness and less HD sharpness). Many of our readers have already read that debate in my When 25p beats 24p article. For many, the idea of actually recording 1920×1080 and ±60 progressive frames per second has required a camera like Sony’s F23 camera, whose official price is US$150,000 without a lens or other accessories, and has been amply covered by Art Adams and Adam Wilt here in ProVideo Coalition magazine. (The RED ONE camera also offers 59.94p at 3K windowed mode for US$17,500 plus lens and accessories, although many RED ONE shooters prefer to shoot 4K to retain a familiar focal length, where they don’t get 59.94p.) Now Sanyo has changed that with a few of its consumer HD camcorders, of which the most interesting is the US$599.95 VPC-HD2000A.

The 540p mode which Apple and Sanyo homophonically call iFrame has been covered both by me and by Matt Jeppsen. As of publishing time, we still have found no evidence to indicate that this format actually uses i-frame encoding. It is interesting to note that apparently even in Europe, Sanyo is offering the same framerates listed above: no 25p or 50p in the VPC-HD2000A even in the European model, but these speeds are fortunately available in the Sony F23 camera. Obviously, the VPC-HD2000A and F23 don’t compete, but they do have the so-far rare 1080p59.94 recording mode in common. It is also interesting to note that Sanyo loves high framerates, but doesn’t love low framerates, since there is no option for 23.976p either.

Like other Sanyo HD camcorders I’ve seen, the VPC-HD2000A records H.264 video using the universal MP4 suffix, rather than a proprietary QuickTime wrapper or a complex AVCHD file structure. This offers certain advantages, since it frees Sanyo from playback limitations and allows 1080p59.94 recording (which is not part of the published AVCHD spec), but prevents an instant and direct clone to a video Blu-ray disk. (It is of course possible to clone the footage to a data Blu-ray disk.)

Sanyo’s 1080p59.94 recording is legitimate, while JVC consumer’s currently is not

You may be asking the above question. Here are some answers:

See the video page to see 720p footage shot with the VPC-HD2000A from your computer. If you are reading this on your iPhone, tap here to see an iPhone optimized version of the same video.

Many readers will recall that Jorge González of Acquest Multimedia in Miami had purchased, tested, and then returned a Kodak Zi8. You will recall that Jorge’s main HD camera is currently a Panasonic AG-HPX500, which you may know is a 2/3″ model which lists for US$14,000 without lens. Jorge had purchased the Kodak Zi8 mainly for his wife, but returned it because of poor stabilization and poor minimum distance with its fixed-focus lens. After returning the Zi8 to Kodak, Jorge read my article called Apple & Sanyo embrace new homophonic video format: iFrame. After reading that article, Jorge became intrigued by the Sanyo VPC-HD2000A, but not because of the homophonic iFrame mode, but because of the 1080p59.94 mode. However, since Jorge knew that the above video was for the web, he shot it it 720p29.97, edited the footage using the new ProRes422LT códec, and gave me the master in that códec. I then determined the TOQ (Threshold of quality) using DVKitchen’s SampleLab and then encoded H.264 and embedded into a Flash player for the web. In this case, the TOQ for this footage turned out to be 3600kilobits per second, due to the extremely fine detail in the trees. Since some of you will also want to see the camera’s performance in 1080p59.94, here’s a link to download raw footage in that format. According to the QuickTime Player’s Inspector, these clips were encoded by the camera a little over 24 megabits per second.

In my opinion (and Jorge’s), the Sanyo VPC-HD2000A produces impressive HD images if you shoot in any of the progressive HD modes. It is one of the best consumer HD cameras under US$1,000 that we have seen to date. Jorge decided to keep this one for his wife, and his whole family is happy. He just ordered a wide-angle adapter for it.

The Sanyo VPC-HD2000A is not a professional HD camera. The stabilization is not good. Its physical appearance will not impress your clients. It does not have a removable lens, and it won’t help you reduce depth of field. It does not have balanced audio, nor does it have any 23.976p, 25p, or 50p mode. The Sanyo VPC-HD2000A unfortunately uses the lame FAT32 formatting, instead of superior HFS+ formatting. Especially since Sanyo freed itself from the AVCHD restraints (which allow the VPC-HD2000A to record 1080p59.94), Sanyo should take the next step and use HFS+ to allow for long clips to reside in a single file.

If you need a consumer camera for under US$1,000, the Sanyo VPC-HD2000A is an excellent option, and Sanyo should hire William Shatner to be in their TV, radio, and podcast spots and read the title of this article (especially since I wrote it without any split infinitive). However, for professional use for under US$150,000, we may have to wait until at least 2011 to see a camera with 1080p59.94. In the meantime, I love 720p50 and 720p59.94, especially when they are oversampled from a sensor that has higher spatial resolution! Fortunately, there are many cameras available today with that combination 🙂

Get a full index of Allan T©pper’s articles and upcoming seminars at AllanTepper.com. Listen to his podcast TecnoTur, together with Tanya Castañeda, Rub©n Abruña, and Liliana Marín, free via iTunes or at