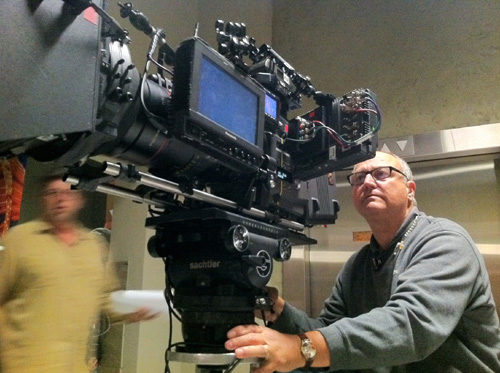 “I’ve been a Sachtler user for over 25 years,” says Caso. “Sachtler is well constructed and provides the best support for our F35 cameras, especially with the additional weight due to the 12-1 zoom, extra power sources and batteries, and the two on-board monitors. One of the added bonuses with a Sachtler is the handy payload shift/boost button switch that allows you to counterbalance both heavy and light camera packageswith the same head.”

The Defenders is not your staid, courtroom bound legal series. The two lead characters are bigger than life. And, their world is like no other. Las Vegas is definitely another character in this drama. “Adventure and glitz are a big part of what we shoot,” says Caso. “Recently, we had a situation where we were shooting on a rooftop and the camera had to literally face straight downward. With a Sachtler – no problem. It could handle the weight of the camera without undue stress.”

The CBS series, The Defenders, starring James Belushi and Jerry O’Connell is shot in Los Angeles, and airs on CBS Wednesdays.