RØDECaster Pro is the ideal tool for a particular type of production: LIVE 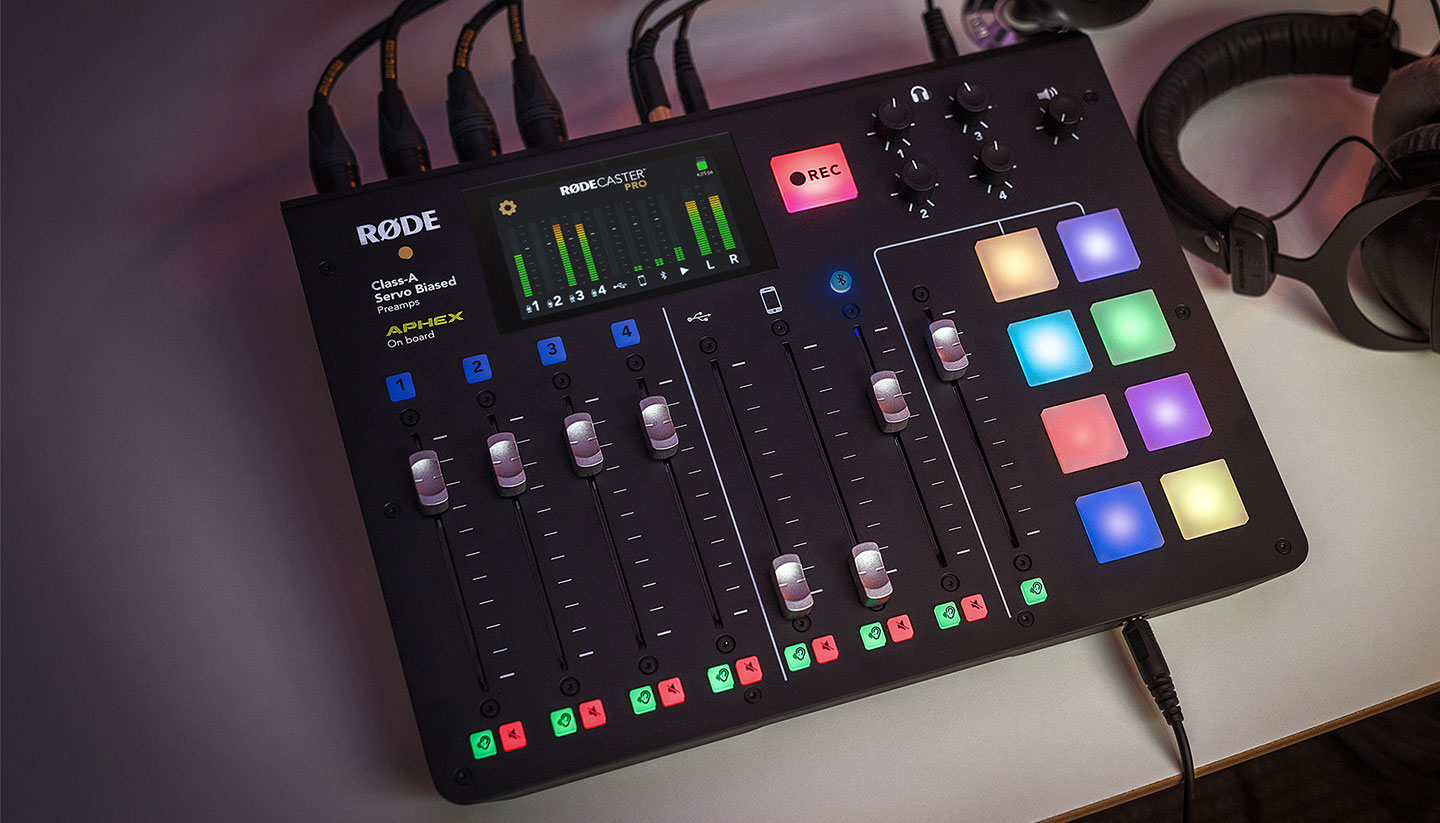 The ideal tools for LIVE production and broadcast are often different from those used for the opposite production process, which is heavily focused on a time-consuming MULTITRACK post-production workflow. There are many audio production mixers for both types of production, although there are fewer options on the market that are truly optimized for LIVE broadcast/production. When I use the term LIVE in this article, I am referring to both true live (where most of the broadcast actually takes place as words are spoken, and we can take truly live, spontaneous phone calls from listeners/viewers) and simulated live, sometimes called live-to-drive or previously live-to-tape, where classic radio shows like Car Talk had simulated live phone calls, which were actually callbacks recorded during the week and edited. Possible applications for RØDECaster Pro go way beyond just audio podcasting (which by definition is pre-recorded and RSS-subscribed). The RØDECaster Pro also fits perfectly for live radio (be it live Internet radio or conventional AM/FM/satellite radio) and even for live TV (be it live Internet TV or conventional UHF/VHF/cable/satellite). This article will clarify all the reasons why the RØDECaster Pro is ideal for LIVE production —together with pre-produced segments, and why many other audio mixers made for MULTITRACK production are not ideal for live production, especially when the show host is also the audio mixer operator. This article will also compare the RØDECaster Pro with some older LIVE audio mixers that many critics apparently never knew about.

Multitrack offers us the maximum control to isolate each sound source, so we can crossgate, equalize, normalize and compress each one individually. The classic case of blocking out someone’s sneeze which interrupted someone else’s epic soundbite is absolutely valid, but costly in post-production time.

LIVE is reality, with all of its adrenaline, spontaneity and imperfections. LIVE allows us to take live phone calls (screened or unscreened). When somebody sneezes or coughs, it’s reality (unless that person has a mute button). When it’s TRULY LIVE, you can say the date and time without ruining the illusion of LIVE for an on-demand performance later. But even if we choose to make the once LIVE event available as on-demand, it can still be potentially evergreen or timeless in a different way, with or without its imperfections. We just need to mark it as prerecorded.

Multitrack mixers that have been “inappropriately” compared with the RØDECaster Pro

Some critics of the RØDECaster Pro have pointed at the Zoom LiveTrak L12 (shown above), partially because it has a matching price US$599 price (Amazon — B&H) and its multitrack capabilities. The LiveTrak L12’s own name indicates that it can be used for live as well as multitrack recording.

But if you ask me:

”Allan, would you recommend the LiveTrak L12 for a live broadcast?”

My response would be:

Yes, but only if you have a dedicated operator for the mixer/recorder. Not if the host is also the operator.

The reason I would say that is because the LiveTrak L12 is so complete, it is really too overwhelming for an operator to be the simultaneous host. If you tried to do both at the same time, you’ll become incomplete as a host/interviewer and incomplete as an operator. As Ray Ortega points out at 11:47 of his excellent review of the LiveTrak L12, the routing section can be confusing. Later, at 12:38, Ray points out that because of the memorized feature, the same fader can be displaying a different level than its current physical setting. I am not knocking the LiveTrak L12. I’m just stating that with so much deep control, the LiveTrak L12 should really be used with a dedicated operator, not by a live host trying to do both.

Even though I have not discussed this with anyone from RØDE, it is clear to me that the purpose of the US$599 RØDECaster Pro was not to be a “me-too” of the LiveTrak L12, but to be a device so foolproof that it’s simple enough to be used even by a simultaneous host/operator. 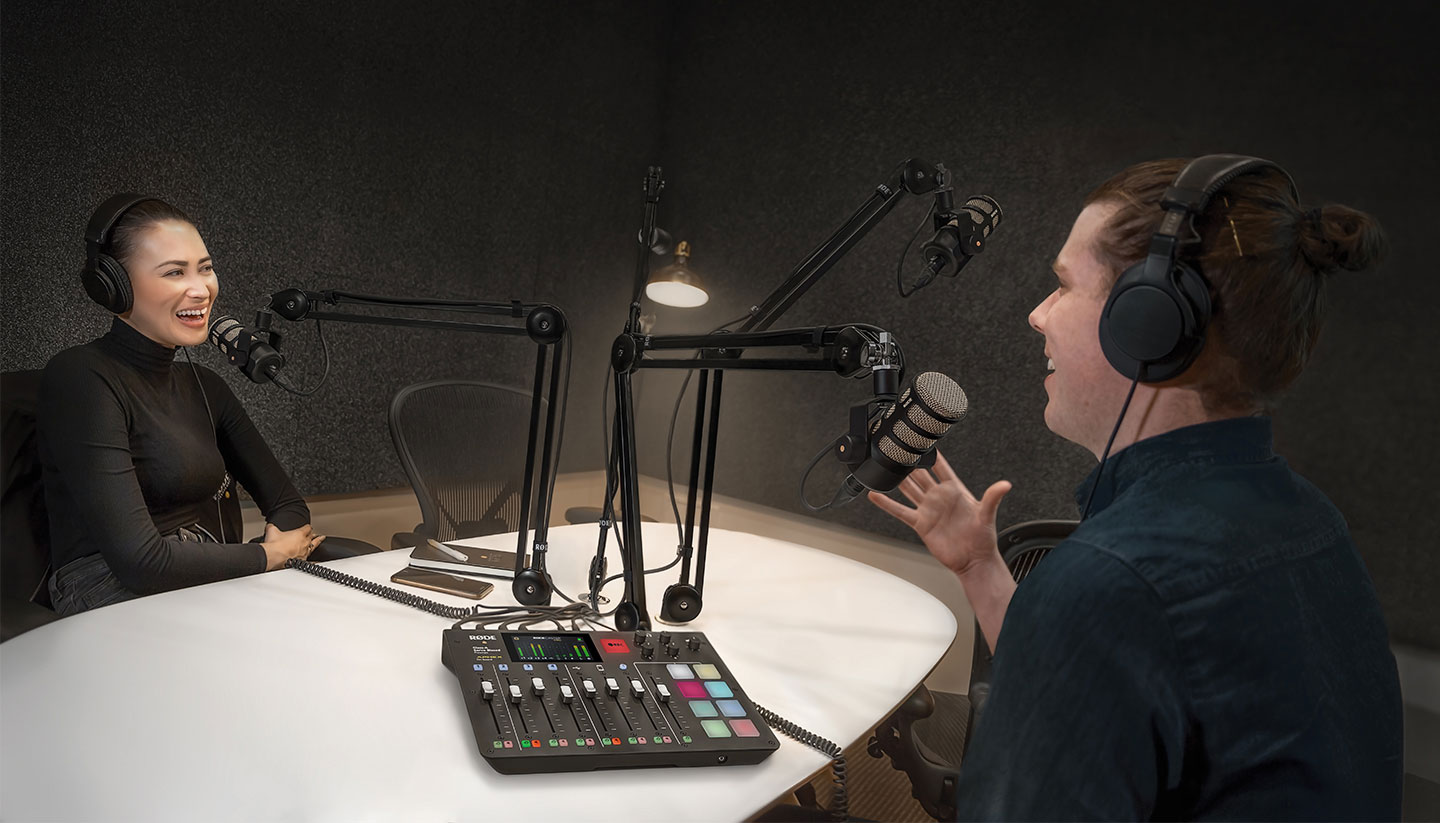 In fact, that’s exactly how RØDE shows it being in its promotional photos, like the one shown above, where the guy on right is both the host and the operator. 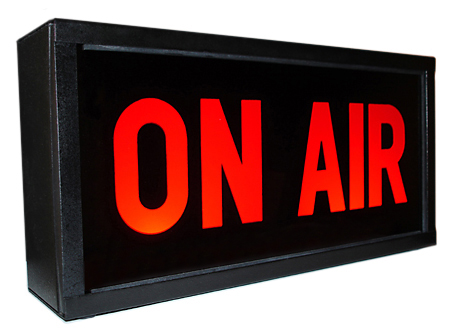 Above, a typical ON-AIR light connected to the relay port on a LIVE broadcast mixer 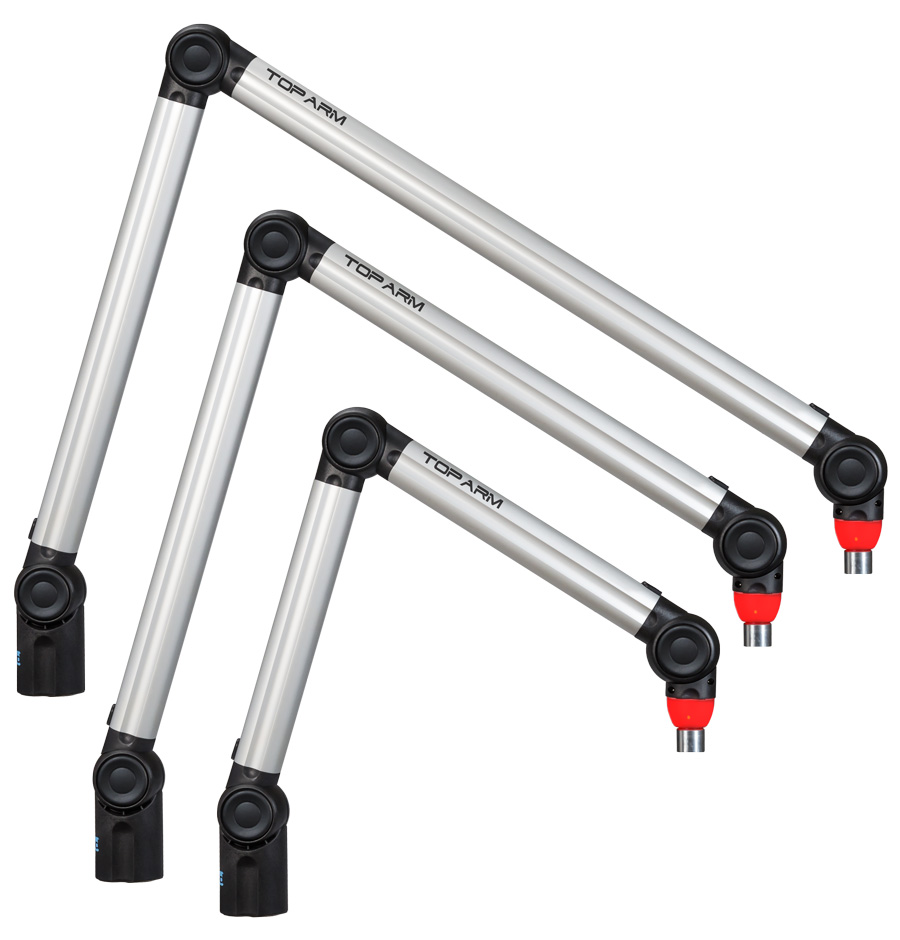 Even though you may have ever even thought about or missed the last three features indicated above, they are so desirable for certain producers in the LIVE world, that Broadcast Tools designed and sells its Mixer Buddy II (shown below) 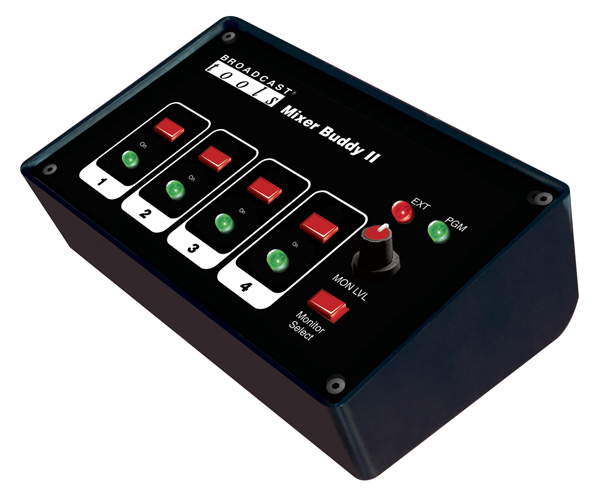 which adds these missing features to any non-broadcast mixer with insert points. Oh, and the Mixer Buddy II also adds mix-minus for phone calls, alleviating that task from the mixer, whether it had the capability natively or not.

The closest LIVE broadcast mixer on the market 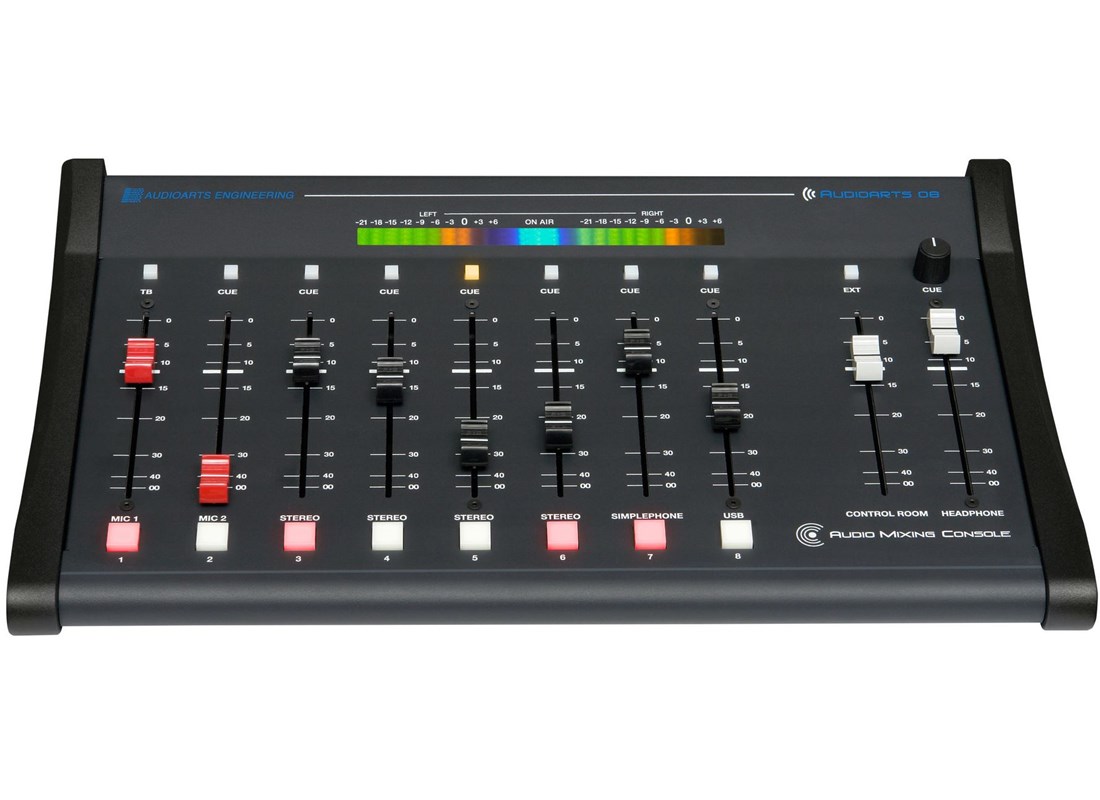 The way I see it from the outside, the RØDECaster Pro was designed to be the most powerful LIVE production tool possible, without overwhelming the operator so much as to be ineffective as to also carry out an interview while operating. The RØDECaster Pro is foolproof so the mix-minus just works with no setup at all; so that the equalization/compression of each mic source is in the menu (since it is never desirable to change them during a live show) and as a result, minimizes the active buttons and sliders required during a LIVE production. I believe that the approach was: For a solo host/operator, less is more.

I am not surprised the designers decided not to include mulitrack on the RØDECaster Pro, at least in the first firmware revision. If they had included it (or decided to add it via a future firmware update), I am sure that their tech support calls would multiply exponentially, since so many people not familiar with multitrack would flood them with requests. And then there would be a flood of people who prefer pre-process or post-process recording of the individual channels, and if they made that software selectable, their support requests would multiply exponentially all over again.

I will reserve some of my other comments about the design for my upcoming RØDECaster Pro full review.

I have been assured that I will receive my RØDECaster Pro review unit soon, and the reason for the delay in its arrival was that the first batch of RØDECaster Pro sold out. I am publishing this to share my reactions about the initial criticisms the RODECaster Pro due to its “lack of multitrack”. I believe the RØDECaster Pro was designed that way intentionally, for many good business and operational reasons, as indicated in this article. If you can afford to hire a trusted, dedicated audio operator, feel free to choose a Zoom LiveTrak L12 (Amazon — B&H), especially if multitrack is essential for you. But if you would rather produce more LIVE content per week and spend less —or zero— time in post-production, and/or want to be your own host/operator, I favor the US$599 RØDECaster Pro (B&H) at the same price. I still plan to use multitrack for my pre-recorded segments, but plan to shift into LIVE for everything else. Fortunately, there are plenty of ways to do multitrack production without any mixer at all. I’ve been doing that for many years, without any mixer. I’ve done it with mulitrack interfaces and mulitrack recorders.