Use ringflash for reflections and fill light. 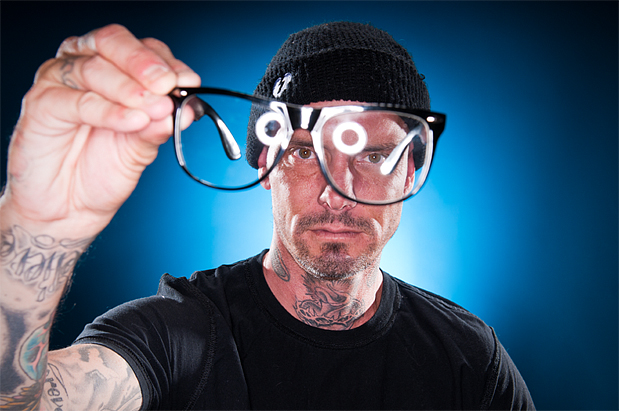 Our set up for this image included 5 Elinchrom rangers using 4 Freelite A heads and 1 Elinchrom ring flash on camera. We started with a ring flash on camera set as the main light on the model’s face.  We added 20 degree grids on accent lights coming in from the side and behind the model.  These lights provided the highlights on the shoulders and neck.  Next we used a boom to put a square Elinchrom Rotalux box over the model to add accent and detail to his hat.  This box was gridded so the light wouldn’t spill onto the background.  The last light was a 40 degree gridded head placed behind the model aiming at the backdrop.

As with many photo shoots, it wasn’t the planned images that we liked the best, it was the spontaneous ones that really worked. Chris (model) brought some glasses as a prop, and we shot some images with him wearing the glasses.  But then he held them out in front of his face, making the ring flash reflections much more prominent and interesting. With this idea rolling, we worked on moving the glasses just right so his eyes weren’t blocked in the background.  A great thing about working with experienced models is they often bring their own ideas to the shoot, and Chris had a good idea here.