It’s all about the internal gyro

Canon, Sony, and even Nikon have internally stabilized sensors or digital stabilization that allows the user to see the stabilization in action. My work camera has a digital stabilizer I often use because I’m not the smoothest operator. In my review, I wanted to see how dependent I have become on internal stabilization and whether or not the Blackmagic built-in gyro mixed with DaVinci Resolve well or better than originally expected.

To set the scene, I swung by my local hobby store and grabbed a couple of balsa wood planes for my Daughter to fly. These are the kind of toy planes with a propeller and rubber band. She loves these planes. I wanted the video to have a chaotic feeling; she is five years old and running around. I shot everything hand-held with a 144-degree shutter. I shot both 24 frames per second and 48fps. 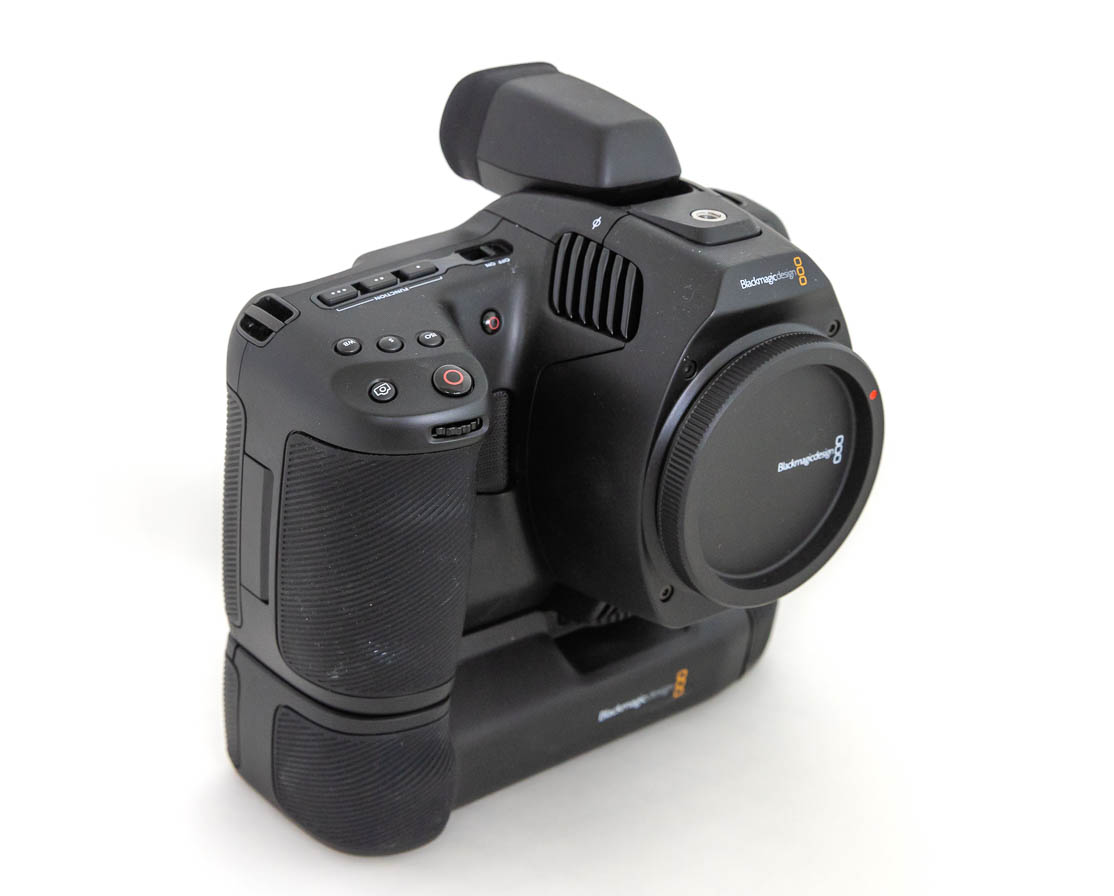 Armed with toy planes and the new Blackmagic Pocket Cinema Camera 6K G2, we embarked on our shoot. You know the saying, “never work with children and animals”? I guess I like to challenge myself. My Daughter did a great job. She’s gotten used to our little video shoots and loves to see the result. I’m telling you all, video your children often, and they will get used to it.

Back to the part of the review you’re here to read. Most of the time, I hand-held the Blackmagic Pocket Cinema Camera 6K G2 at waist height and ran after my five-year-old Daughter. In other words, not the best way to shoot and capture smooth and stable footage.

When my Daughter ran, I ran with her because I was curious to see if the built-in gyro and DaVinci Resolve could smooth the footage in any acceptable fashion. I also shot the standard shots we all face when shooting our projects. These could be as simple as a slow pan or holding a camera on a subject. 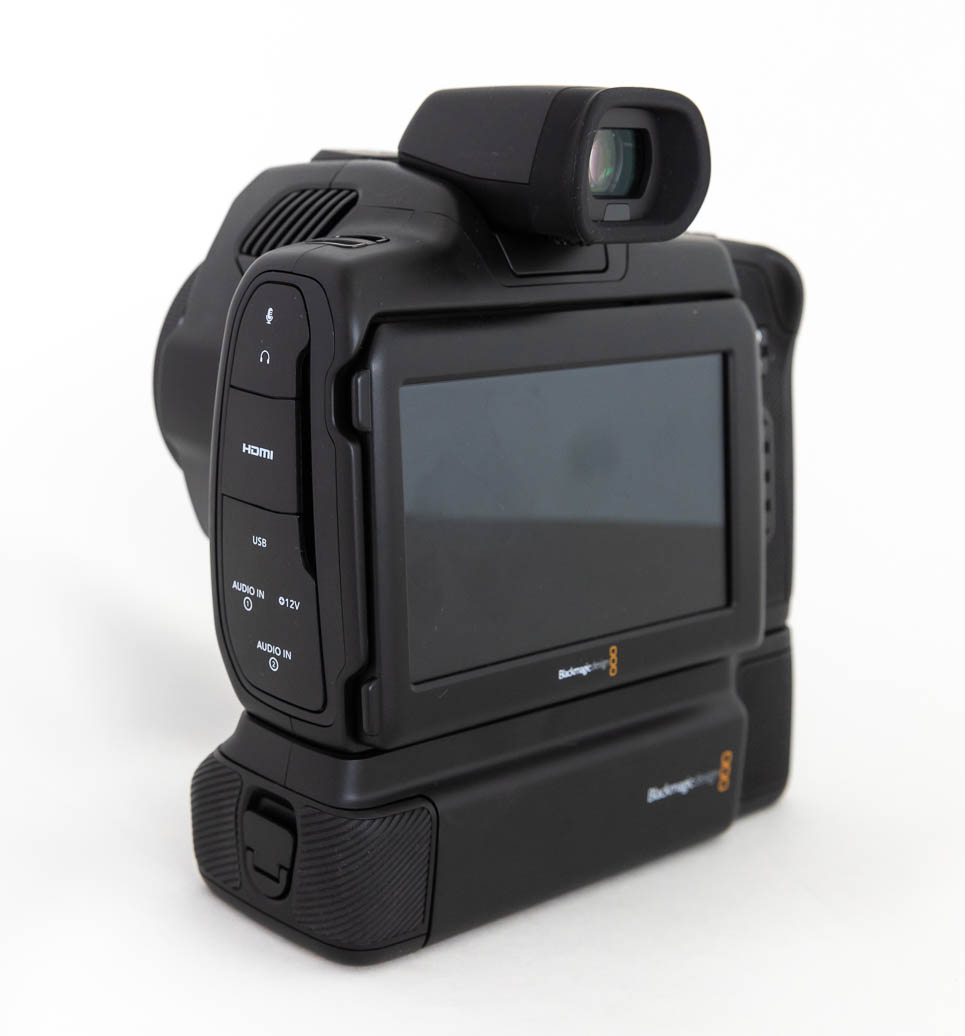 Time to offload and head inside to my DaVinci Resolve. I have access to a pretty beefy MacPro, and I was not worried about processor power to stabilize my footage. In DaVinci Resolve, I quickly learned one should not try to stabilize an entire shot if you have aggressive camera movements but to work with the edited footage.

Stabilizing the footage in DaVinci Resolve gives you a few options: Perspective, Similarity, Translation, and Camera Gyro. We want Camera Gyro. Once selected, you click the stabilize button, and DaVince Resolve does the work for you. You may move the “strength” setting, which is the only parameter when using the Camera Gyro stabilization function.

In most NLEs, the stabilization function works well on some shots but not all. In DaVinci Resolve, the Camera Gyro function seemed to work well on all of my shots. An image of me running alongside my Daughter had a tremendous amount of motion that would be outside the ability of most NLE stabilizers but I think DaVinci and the camera’s gyro handled it well.

The problem with using a camera’s internal gyro to stabilize footage in DaVinci Resolve means you cannot see how much cropping will happen as you shoot. It all happens in Post in DaVinci Resolve. Is this a deal-breaker? I don’t think so, but you must be mindful of the potential crop factor when stabilizing footage.

In DaVinci Resolve, I noticed a stabilizing bug, you could say. If you stabilize the footage after it is edited, the camera gyro stabilization causes a bit of unwanted bounce at the head of a shot. The fix is to pull the video out to give a bit more headroom and stabilize the footage. After that, I sliced off the extra headroom and returned to the original edit. That seemed to fix the unwanted stabilizer bounce.

I think what Blackmagic has done with the internal Camera gyro is pretty impressive. You do not have to use 100 percent of the stabilization and all the crop that comes with it if it gives you options in post that were not there before for Blackmagic cameras.

Made from lightweight carbon fiber polycarbonate composite, the camera features a multifunction handgrip with all controls for recording, ISO, WB, and shutter angle right where they should be, at your fingertips. Featuring a larger 6144 x 3456 Super 35 sensor and EF lens mount, the Blackmagic Pocket Cinema Camera 6K G2 is incredibly flexible and works in just about any shooting situation. 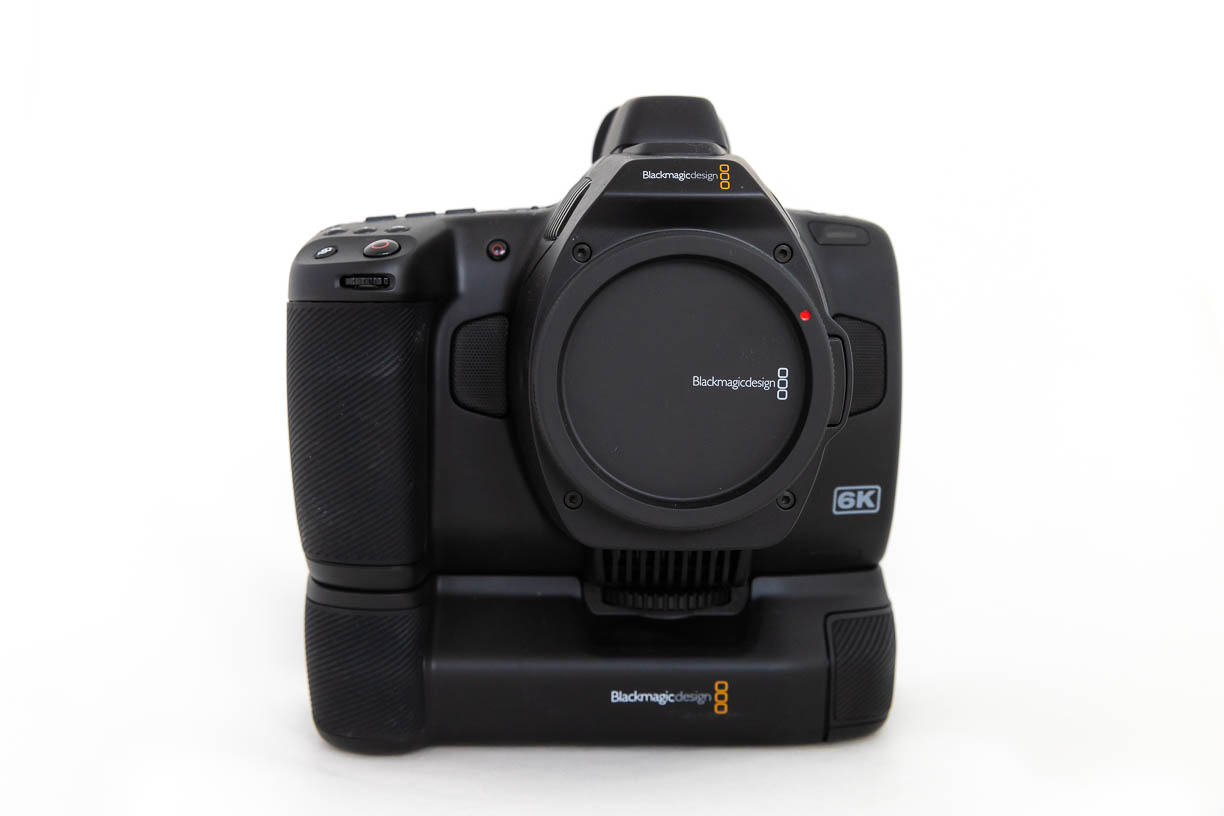 With the advanced Blackmagic OS, you get an intuitive and user-friendly camera operating system based on the latest technology. In my mind, the Blackmagic OS is one of the best-operating systems for UI and camera interaction. The interface uses simple taps and swipes to adjust settings, making quick and easy setting changes.

While 13 stops of dynamic range are admirable, what really shines is the camera’s dual native ISO of 400 and 3200. All models let can shoot up to 60 fps or 120 fps windowed.

Blackmagic Pocket Cinema Camera features a large, brightish 5-inch touchscreen that makes it easy for you to frame shots and accurately focus. It also makes it easy for my big nose to change settings on the camera when I use the eyepiece. A bit frustrating, but maybe only something to worry about if you have a big honker.

On-screen overlays show status and record parameters, histogram, focus peaking indicators, levels, frame guides, and more. The Pocket Cinema Camera 6K G2 LCD monitor is a more advanced display that can be tilted up and down so it’s easy to monitor a shot from any position. I wish this monitor also flipped out for side viewing, but we can’t have everything. 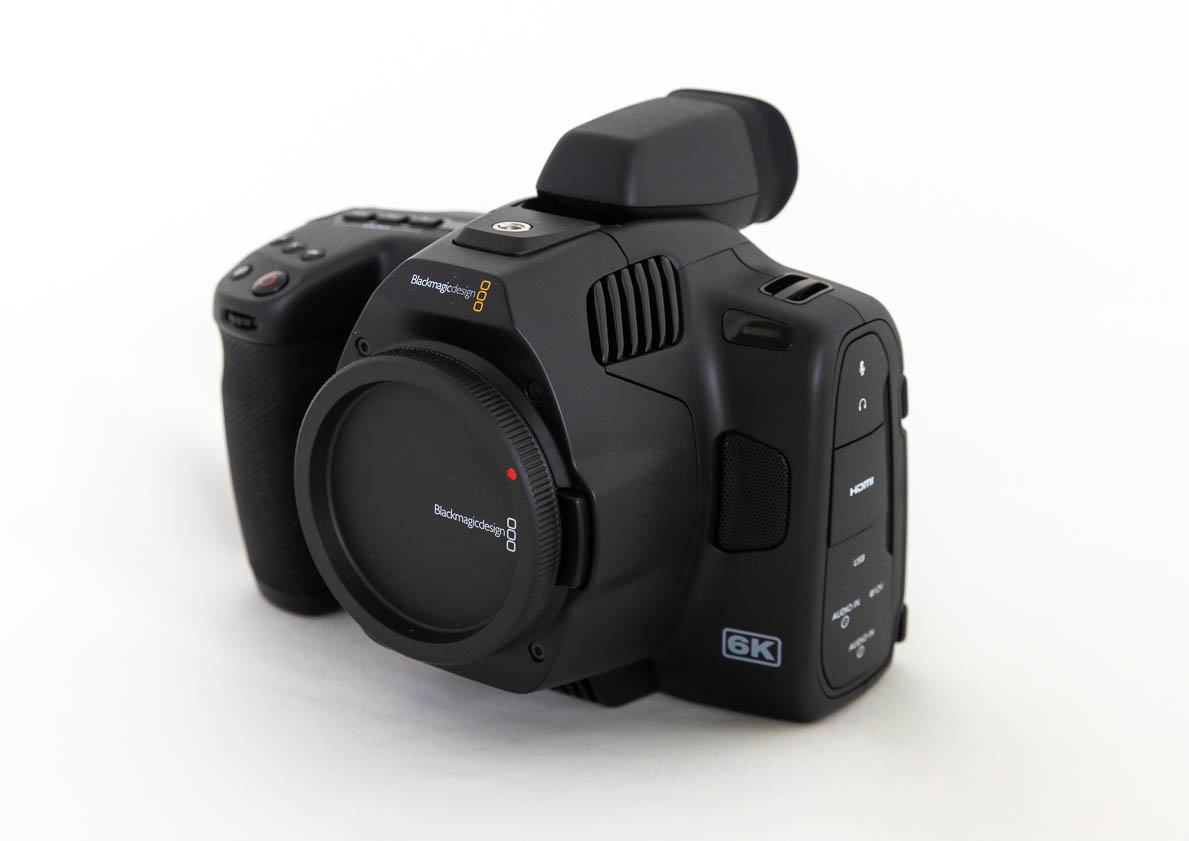 The Pocket Cinema Camera 6K g2 has the same generation 5 color science as the URSA Mini Pro 12K, which delivers accurate skin tones and color in every shot. The color science also handles some of the complex Blackmagic RAW image processing, so the sensor’s color and dynamic range data is preserved via metadata, which you can use in post-production.

The Pocket Cinema Camera 6K models support an optional viewfinder to use outdoors and hand-held shooting. With that viewfinder, you get an integrated high-quality 1280 x 960 color OLED display with a built-in proximity sensor, four element glass diopter for incredible accuracy with a wide -4 to +4 focus adjustment. I could even use the viewfinder without my glasses or contact lenses, and I am very near-sighted. 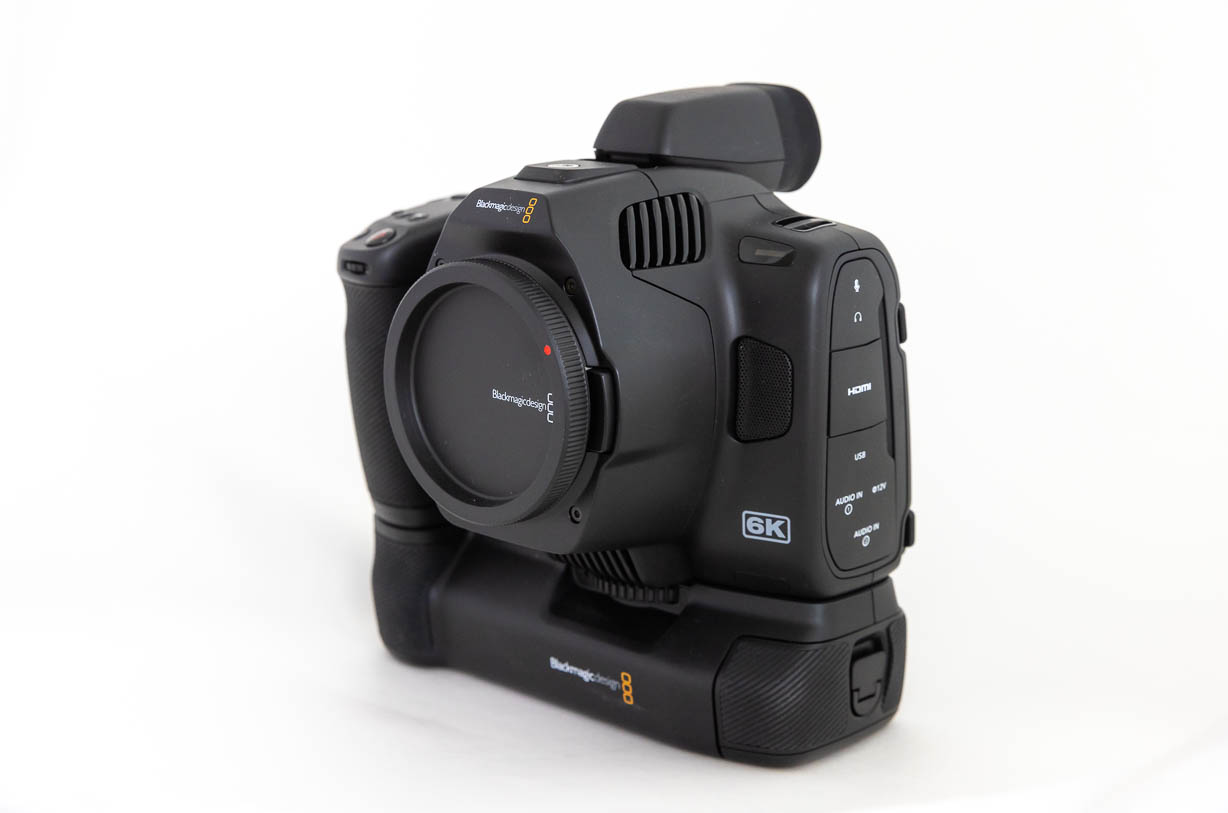 The Blackmagic Pocket Cinema Camera 6K models both now use larger NP-F570 batteries for longer shooting times without needing to change or charge batteries. A locking DC power connector is used so you won’t have to worry about losing power during a shoot. Plus, the included AC plug pack can power the camera and charge the battery simultaneously. Even the USB-C expansion port can trickle charge the battery, so you can use portable battery packs, mobile phone chargers or laptops. The optional battery grip lets you add extra batteries to dramatically extend the power of the camera so customers can keep shooting all day.

All Pocket Cinema Camera models include a full version of DaVinci Resolve Studio. A quick reminder, if you buy DaVinci Resolve it costs you $299 and getting it free with the camera is still a helluva deal. DaVinci Resolve features the new cut page with intelligent editing tools and innovative new features designed to help you quickly find the footage customers want, edit it together and output it fast. In addition to the new cut page, you also get DaVinci’s legendary professional editing, advanced color correction, audio post and visual effects tools, all in a single software application.

As a camera update, the Blackmagic Pocket Cinema Camera 6K G2 is a moderately decent bump-up in quality. It is with the unlocking of the internal gyro to stabilize your footage in DaVinci Resolve that the camera packs a punch.