A Super35mm Sized-Sensor is the backbone to a very flexible camera system.

In the past, if you wanted two Blackmagic Design cameras to match, you would need two of the exact same camera, which, admittedly, is not the least expensive option for budget-minded productions. I have always thought Blackmagic needed to make their camera’s images more consistent between camera models.

Why is it important to have two cameras with similar or the same sensor? Every color matched a Canon to a Sony. It can be done, and with DaVinci Resolve or Film Convert, you can match a camera pretty well. It is not that hard to do, but as someone who has tried to get Sony skin tones to match Canon’s, it isn’t the easiest of tasks.

Let’s get back to the Blackmagic Design URSA Broadcast G2, which is, essentially, a bigger Pocket Cinema Camera 6K. The not-so-secret behind the Broadcast G2 is that the broadcast camera is a beefed-up URSA Mini Pro version of the Blackmagic Pocket Cinema Camera 6K. Same sensor. Same crop. Different bodies with different features. Same great image.

Don’t believe me? Then you need to spool up the ol’ internet and take a look for yourself. 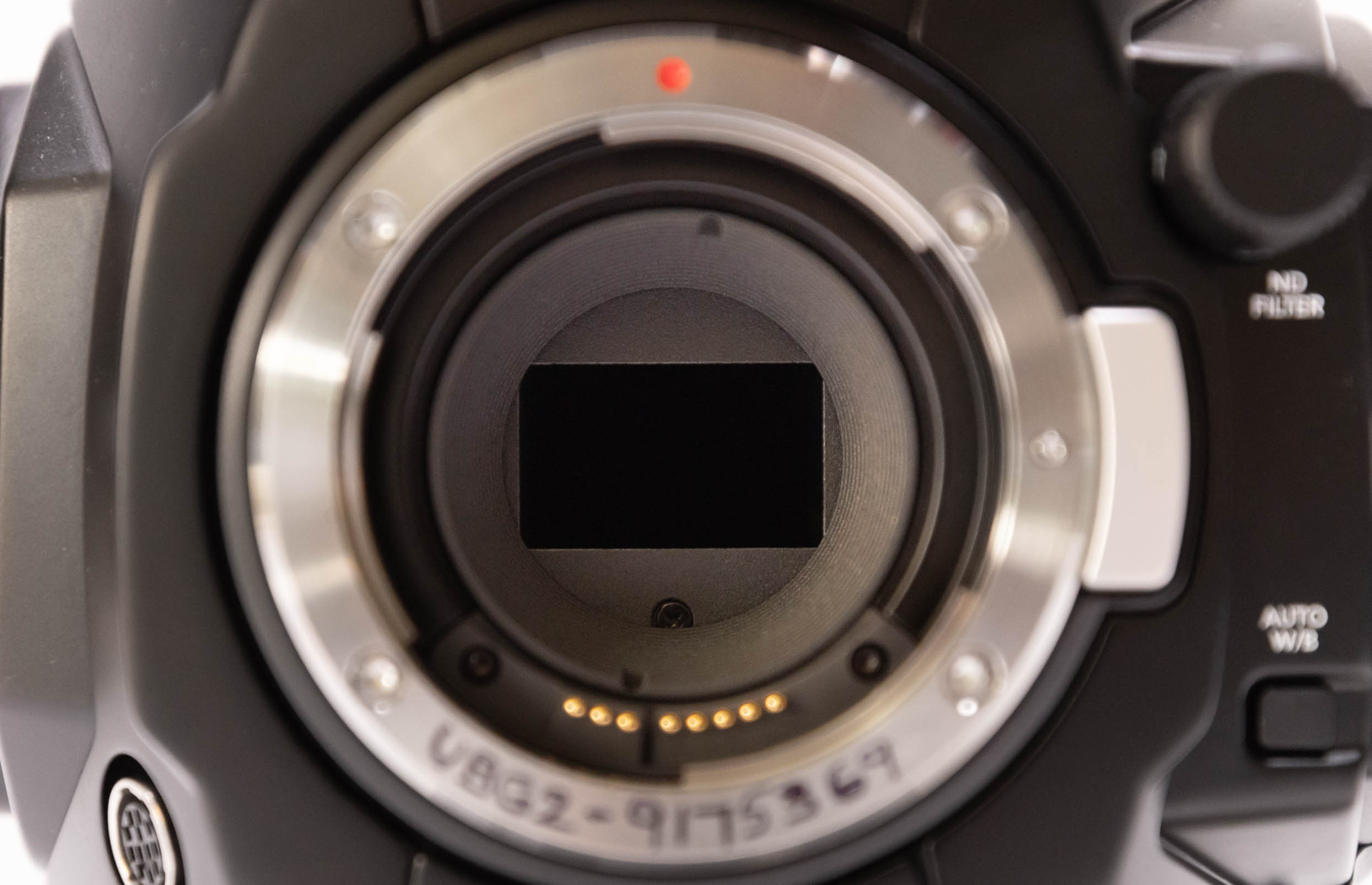 Are you not convinced yet? Like any good journalist, I went to the source and immediately asked Blackmagic Design if the two cameras utilized the same sensor and had mostly the same features. The answer… yes. Absolutely.

About the only feature difference between the URSA Broadcast G2 and Pocket Cinema Camera 6K Pro is that the Pocket camera uses “ISO” as a setting and the URSA Broadcast uses GAIN. Why? Mostly because the broadcast world is a “Gain” world instead of an “ISO” world. I prefer ISO.

To be absolutely honest, I have always found a URSA Mini Pro, or URSA Broadcast with Blackmagic’s great EVF, to be the easiest to use over a Pocket Cinema Camera 6K. The size and weight of the camera package are similar to a news-style camera and, when attached to an EasyRig, floats in your hands very well. It is very easy to make great images with this combo. 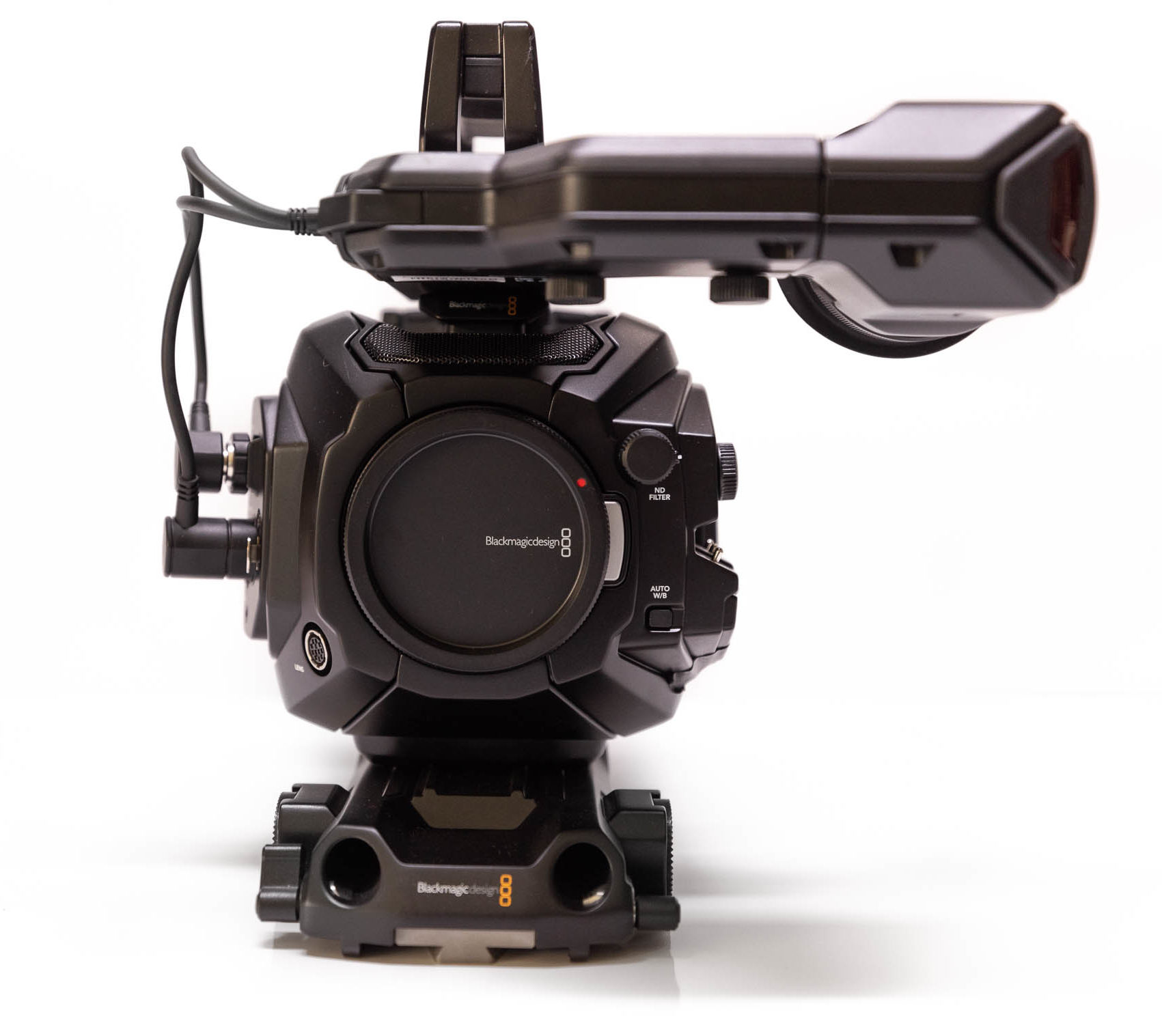 Obviously, this is not the only difference between the two cameras. The URSA Broadcast G2 comes with a whole broadcast feature set necessary for multi-camera broadcasting of a live show. The Broadcast G2 comes with an SDI Input, SDI Output, SDI Monitor Output, SDI Rates of 1.5G, 3G, 6G, and 12G. As well as 2 x XLR inputs switchable between mic, line, and AES digital audio. The G2 also comes with Reference Inputs for Tri-Sync, Black Burst, and Timecode. The G2 also supports headsets for talkback, 12-pin Hirose Broadcast Lens Connection, and in-camera correction of color fringing when using compatible broadcast lenses. All of these necessary features during multi-camera broadcast productions.

What I find interesting with the URSA Broadcast G2 is not found in the Broadcast features but within the body itself. When I started to review the Blackmagic URSA Broadcast G2, I thought it would be a bit of a Pocket Cinema Camera 6K on steroids with more options. My thinking comes from a history of Blackmagic camera bodies delivering more features and higher frame rates in larger camera bodies due to the more space internally for more processing and cooling power necessary to provide more features. This thinking does not seem to be the case with the URSA Broadcast G2. When you look at the Broadcast G2 tech specs versus the Pocket 6K tech specs, you see very similar information.

In action, the cameras share the same features and frame rates. I do not see this as a disappointment, not at all. I think the URSA Broadcast G2 is a flexible camera that can allow owners to bounce from many different projects without grabbing a different camera or a specialty broadcast camera when the next project requires it. I think Blackmagic feels the same way, and that is why they include a Canon EF mount with the URSA Broadcast G2 to go with the B4 lens mount. 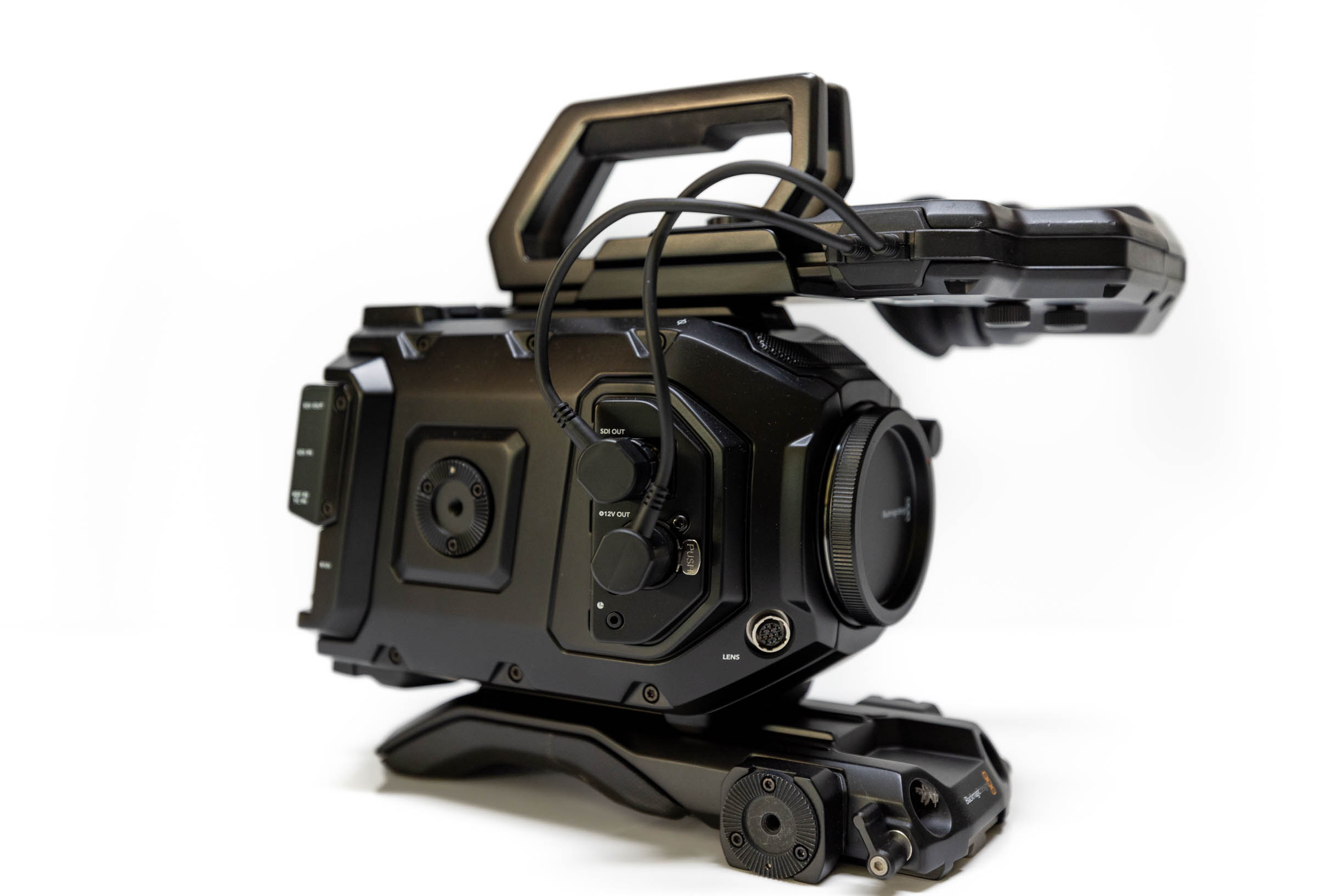 In many ways, the URSA Broadcast G2 is the camera many shooters wanted when the URSA Mini Pro 12K was released. At the time, I heard from a couple of friends that all they wanted was a 6K camera in a URSA Mini Pro camera body. Most were delivering 4K material and loved the idea of over-sampling 6K source files for 4K delivery. To them, the 12K was too much resolution without the dual native ISO settings that users grew to love in the Pocket 6K. But, the Pocket Cinema Camera 6K was not the kind of camera clients love to see when they’re paying you to shoot for them. Trust me; they want to see the “big” camera, as one client told me a while back. Now, we have the URSA Broadcast G2, and the new challenge for Blackmagic Design will be to get potential customers past the “Broadcast” name.

How is the URSA Broadcast G2? It is great. The G2 has all the attractive features found in all URSA Mini Pro body styles by Blackmagic Design. The great dual-native ISO, or Gain, in the case of the Broadcast naming of 0dB and 18dB Gain, or 400/3200 ISO, is a wonderful feature allowing shooters to capture lowlight images in some of the most challenging situations. External buttons for quick access to features to the great Menu User Interface are top-notch and should be an industry ideal for other camera manufacturers. 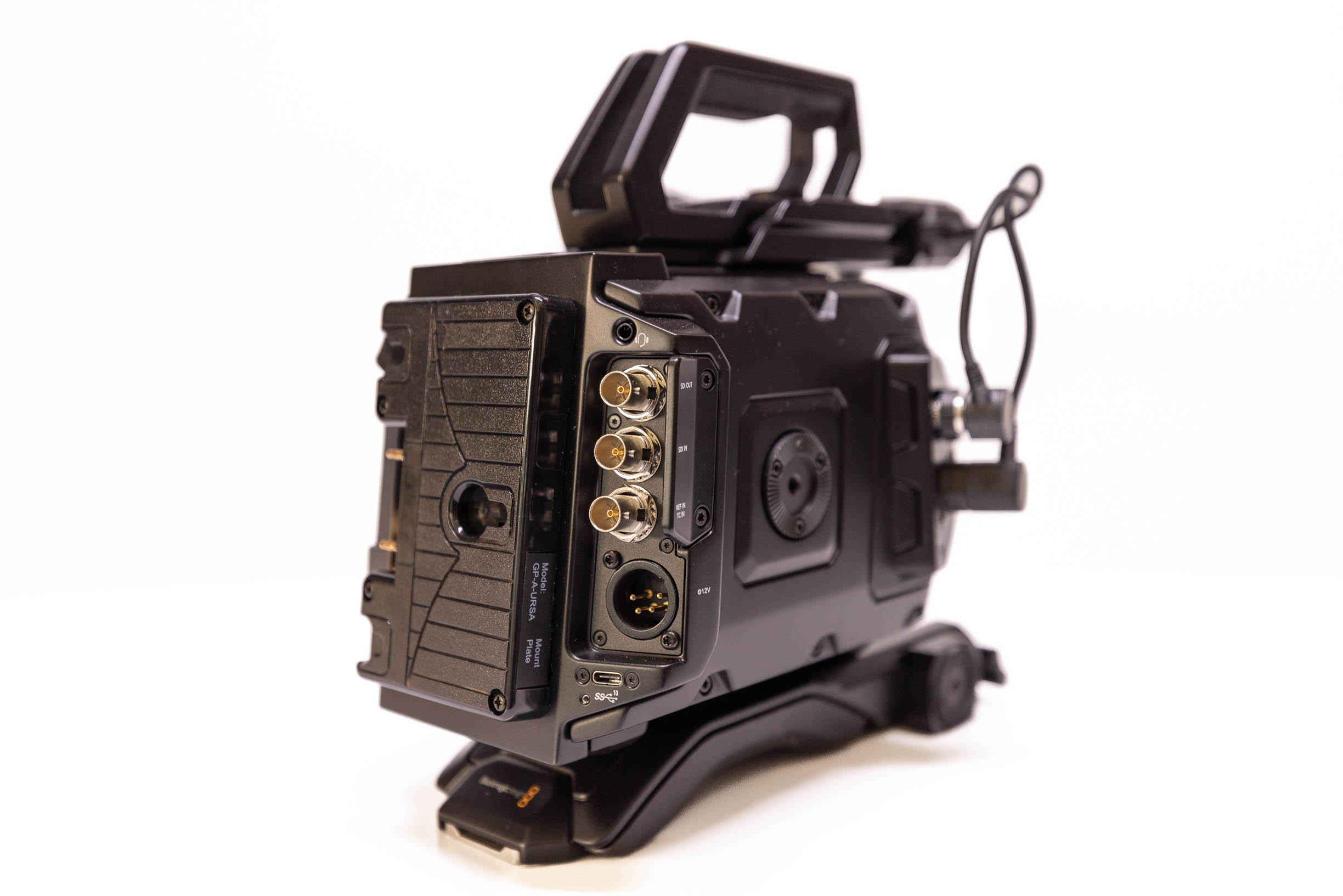 No surprise, but the image and highlight roll-off and color are nearly the same as the Blackmagic pocket cinema camera 6K Pro, which is all very pleasant and rich. It is easy to make pretty pictures with the URSA Broadcast G2. You really cannot go wrong with the S35 mm-sized sensor and color to go with it. A question pops into my head at this moment, when might we see a full-frame sensor from Blackmagic Design. Full-frame is not an easy engineering task, but neither is 12K.

What is great about the long life of Blackmagic’s URSA Mini camera body style is you have all the same accessories that go with all the URSA Mini cameras. The EVF and the shoulder pad have not changed in years, and the ones you bought to go with your first URSA Mini will work on this new 6K version. Yet, it has me wondering. The URSA Mini body style has been with us for a while now. Is it time for Blackmagic to move on with a new camera and styling? Maybe, I don’t begin to know what Blackmagic has up its sleeve. I do hope they find a way to put that 12K sensor into other cameras because it is absolutely gorgeous. 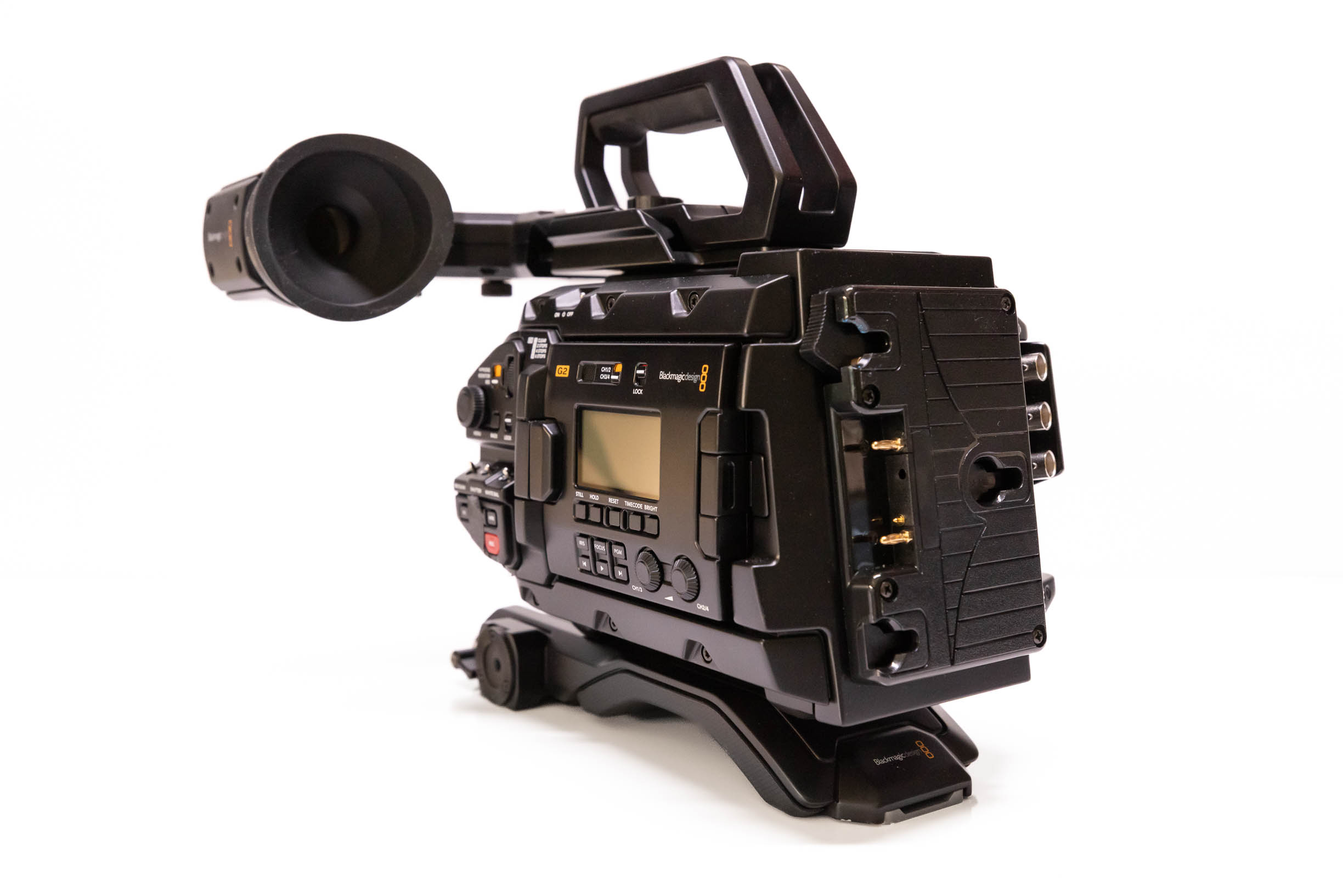 What I did find slightly annoying was the Broadcast setting for the camera shutter is in factions only and not my preferred 180-degree shutter. I prefer a 180-degree shutter because I don’t have to physically change my shutter when switching between 23.976 fps and high frame rate shooting.

Why haven’t Blackmagic Design done this before? Just put the same sensor into two wholly different body designs and sizes. From my perspective, as a documentary shooter who shoots a ton of interviews, it just makes life easier if the two cameras you’re using are as close as they can be in the image between the two.

The URSA Broadcast G2 with an included Canon EF Mount and B4 Mount is a fairly good camera mainly because it is so inexpensive and feature-rich. You get the benefits of the already successful sensor from the Blackmagic Pocket Cinema Camera 6K with the tools to use the URSA Broadcast G2 in many different shooting situations. Essentially, great color with camera flexibility.