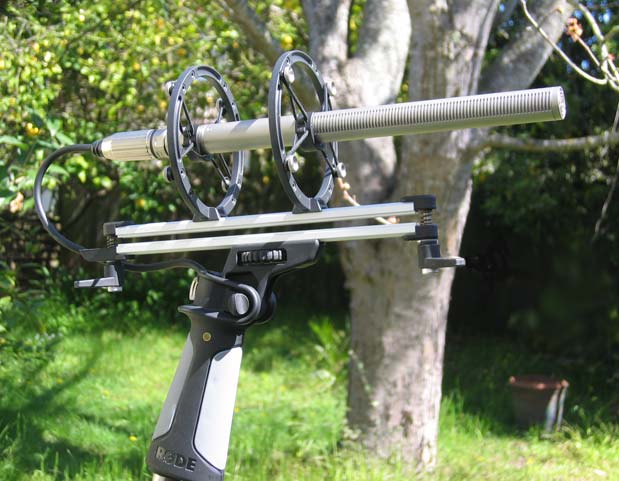 Those who don’t want to spend more than $500 can audition mics such as the Sennheiser K6/ME66, Audio-Technica AT897, or the impressive-for-the-price Rode NTG-1 and NTG-2. These mics (particularly the two from Rode), perform well when used correctly, but don’t offer the sonic excellence of $1000-plus microphones. Sound mixers chose no-compromise mics such as the venerable $1100 Sennheiser MKH416 and $1600 MKH60, the $1350 Sanken CS-3e, and the $2000 Schoeps CMIT 5U. These mixers know that a good microphone will still be useful long after the latest digital camera has been tossed on the dust heap of history.

That’s all well and good – but where does this leave a microphone with a $699 street price like the Rode NTG-3? That price point could be considered a no-man’s land. However, based on my experiences working with an NTG-3 for a month, it should be considered a sweet spot. The NTG-3 is an impressive mic, given its moderate price. Heck, regardless of price, it’s an impressive mic. 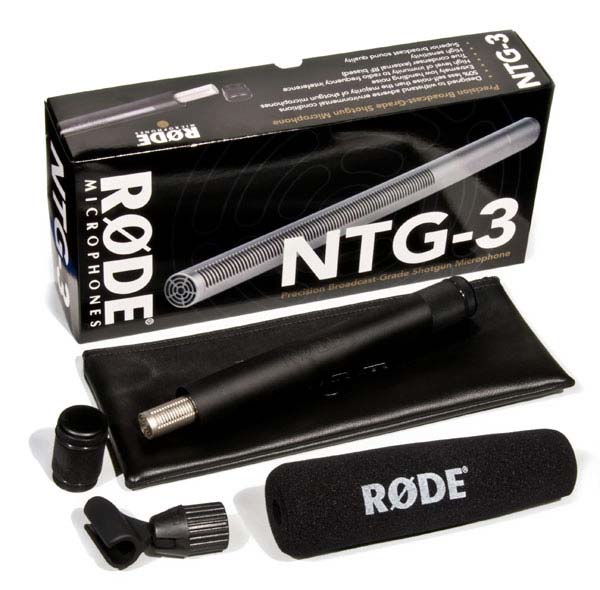 The NTG-3 uses a line gradient supercardioid (i.e., directional) RF condenser capsule packaged in a well-shielded housing. The NTG-3 has the excellent sensitivity common to good condenser mics. Rode rates the mic’s sensitivity at -30dB ±2dB re 1V/Pa @ 1kHz, yet says the mic can handle sound pressure levels up to a jackhammer-loud 130dB. The mic requires 48V phantom power, is 10 inches long with a 19mm diameter, and weighs less than six ounces. You can find complete specs here. These are type of specs you don’t usually (if ever) find in a sub-$500 shotgun microphone, but expect to find in an over-$1000 mic.

However, just as the proof of the pudding is in the eating, a microphone is measured by how it performs in the real world. And that’s how I evaluated the NTG-3. A shotgun microphone has two jobs. Capture sound you want, and reject sound you don’t want. The Rode NTG-3 does both jobs very well.

I compared the NTG-3 to several mics, but particularly to the most equivalent mic in my kit, a Sennheiser 416. After some qualitative tests around the studio to get a sense of how the NTG-3 handled and responded, I took it out on some real jobs. The mic has a slightly wider pick-up pattern than the 416 with a gentler transition to off-axis rejection. This design choice makes two-shots and moving characters easier to cover, but also means that in noisy locations you may pick up some unexpected and unwanted sound.

The NTG-3 has a rolled off low-frequency response that when miking up close in a quiet studio makes the NTG-3 sound a bit brighter than my 416. By “bright” I don’t mean “harsh.” The NTG-3 doesn’t have the harsh and thin response found in many lower-cost mics. Besides, out in the field, I usually use my mixer to roll off the low-end of my 416. Further, at standard field operating distances and conditions (i.e., with the mic inside some sort of wind protection), the difference was not very noticeable. The NTG-3 captured a fresh and full sound that I found pleasing.

The main types of unwanted sound that shotgun mics must reject are off-axis sound, handling noise, and radio-frequency interference. While the intentionally wider pickup pattern of the NTG-3 means the mic will pick up more ambience than a 416, it does a great job ignoring truly off-axis sound. Once I got the hang of its pick up pattern and shoulders (the transition area from on-axis to off-axis), I was comfortable using the mic in crowds. Rode rates the mic’s self noise at a very low 13 dB-A, and my experiences back up that rating. It’s a quiet microphone. Since Rode rolls off the low-end response of their mic, it captures little boom handling noise.

Most significantly and impressively, the NTG-3 rejects radio-frequency interference coming from the growing menace of mobile phones. In the documentary world, we often can’t tell the people we’re following to turn off their mobile devices. Those devices pump out interference picked up by some otherwise fine microphones. But the NTG-3 ignored every mobile device it encountered, including the notoriously noisy (or perhaps just ubiquitous) iPhone. This might not be a big issue when working on controlled sets or stages, but it’s a huge benefit for documentary, news, and corporate work.

Additionally, humid, rainy locations didn’t provoke any sizzle in the NTG-3. And while I didn’t check to see if the NTG-3 equals the 416’s ability to pound nails, the mic does appear designed to handle the rigors of daily use and abuse. A nice extra: Rode includes a foam-lined aluminum cylinder that provides water-resistant, strong, and secure storage for the mic. Overall, the NTG-3 mic is an instrument I can bring and use almost anywhere. 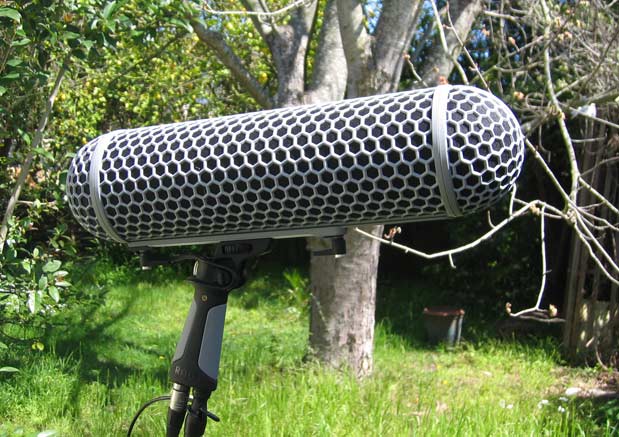 The Rode Blimp windscreen system costs about half the price of competing systems, but weights a bit more.

When recording exteriors, I housed the NTG-3 in Rode’s Blimp shock mount and windshield. The Blimp has a construction and appearance similar to the industry standard Rycote modular windshield kit: A four-point shock mount, pistol grip, rigid housing, and furry “dead cat” wind cover (which the Aussies at Rode call a Dead Wombat). But Rode’s system costs only $299, about half the price of a similar Rycote set up. The well-built Rode system performs very well, adjusting to accommodate a wide-range of shotgun microphones, and isolating those mics from handling and wind noise without significantly attenuating frequency response. However, I found two drawbacks with the system.

The tail cable that runs from a mic and through the Blimp’s handle is a few inches shorter than I’d like; that limited my ability to position the handle toward the middle of the windshield. Buying or building a slightly longer tail cable will easily rectify that problem, so that’s not a big deal. Resolving the other issue requires Rode’s intervention. The complete Blimp system weighs a bit more than the Rycote windscreen systems I usually use. It’s only a matter of several ounces (with the exact difference depending on the configuration of the windshields), but when those extra ounces are at the end of a 10 to 16-foot boom pole and I need to hold that pole steady during long takes, the weight takes its toll. On one documentary shoot where I had to hold a pole for very long difficult shots, the extra Blimp weight motivated me to stop using the Rode Blimp. I’d like to see Rode offer a lighter-weight Blimp system, perhaps with a simpler (and lighter) boom mount in addition to a pistol grip. But for people working with shorter poles or holding those poles for shorter takes, the monetary savings may outweigh the, uh, weight penalty. The Blimp is a well-made system that could benefit from a little dieting. 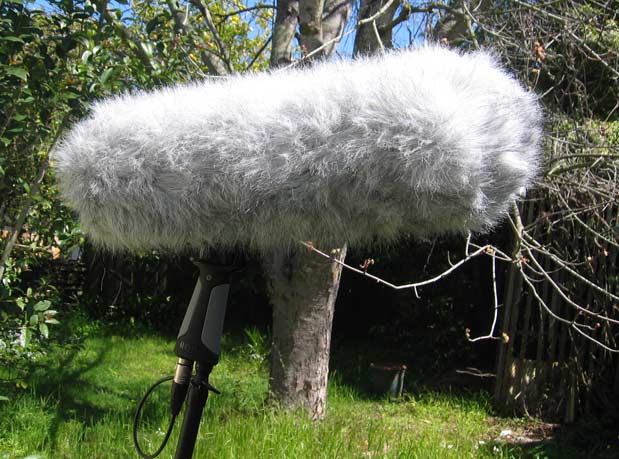 The NTG-3 is a well-designed and well-built audio instrument. The smooth response, generous pick-up pattern, and outstanding interference rejection make the mic a pleasure to work with. While some may find the $699 price beyond what they want to spend, the NTG-3 is more than worth it. Even at a higher price, it would be a very good value that should serve its owners well for many years. And what digital camera can you say that about?