$80 turns your PMW-EX1’s LCD into a big, beautiful viewfinder. 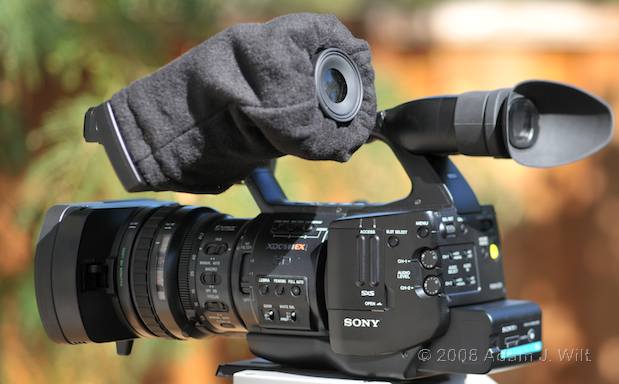 Lots of people have said, “if only there were a viewfinder lens I could mount on the PMW-EX1's LCD, I'd be happy.” Palm Desert shooter Mike Stevens not only said it, he did it: his Hood-Pro hood is a strap-on LCD hood, and the Sock-loupe is, well, a sock with a +7 diopter loupe sewn into the toe. Pull the sock over the hood, and hey presto! You've turned the LCD into an eye-level EVF, arguably better than the one on the EX3. The floppy sock squishes up against your face, whether or not you wear glasses, providing a good seal against extraneous light, while the two-element lens provides a close-up, detailed view of the LCD.

Indeed, the magnification afforded by the Sock-loupe exceeds that of the EX3's EVF: compared to my ancient DCR-VX1000's EVF, which gave me an image a bit taller and narrower than the EX3's, the Sock-Loupe's image is about 20% taller than the VX1000's, and maybe 60% wider.

Put another way, the Sock-loupe gives a view of the LCD comparable to looking at a 40″ monitor from four feet away. It's more like watching a movie than staring into a viewfinder; the LCD is so large you can see the individual pixels, and checking focus within the limits of the LCD's accuracy is a snap. 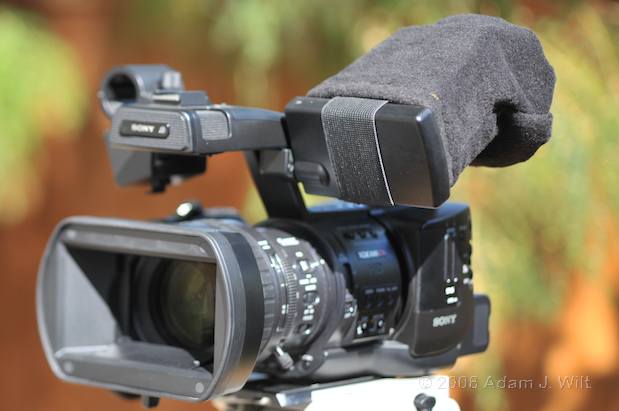 An elastic strap holds the Hood-Pro to the LCD.

I wear glasses with large lenses, and I wondered whether the lack of a full-coverage eyecup on the Sock-loupe would be a problem. I found that the squishy sock material conforms to my face, sealing well enough to exclude almost all extraneous light. Even in bright sun, I had no trouble seeing the LCD. The floppiness of the sock means that the lens tends to sag when you aren't pressing it against the hood with your face, so (it is claimed) you diminish the risk of sun-burned LCD screens (I did not put this to the test, having only one EX1 to work with and no interest in paying for a screen replacement should this feature not work as advertised!).

The hood itself is a black trapezoidal box with a velcroed elastic strap to hold it on the LCD. Its edges have a rubbery coating, so it won't slip around on the screen's frame. The hood can be used by itself to keep stray light off the LCD. 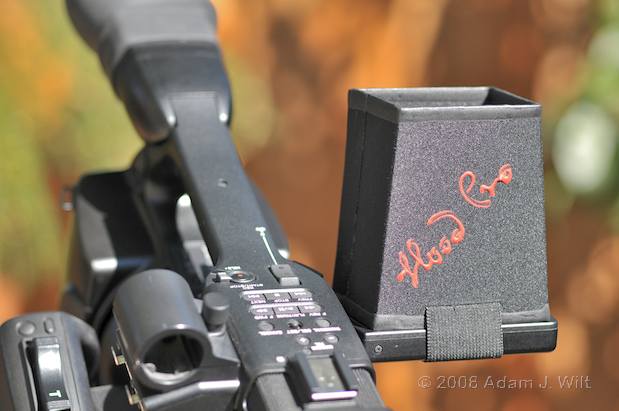 The Hood-Pro can be used by itself to block extraneous light. 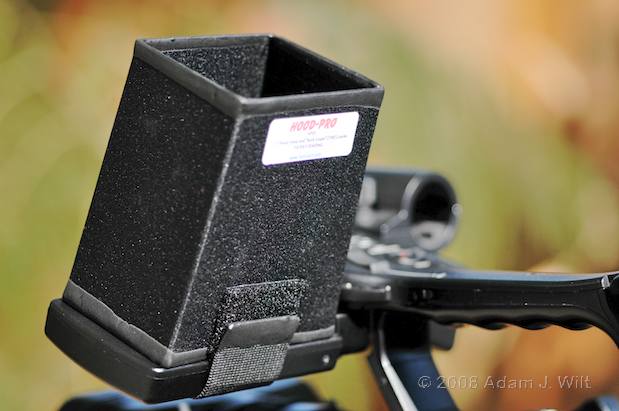 The elastic strap attaches with velcro for quick fastening.

The sock is a soft, fuzzy cloth tube, with an elastic opening to fit snugly around the hood and LCD. A two-element loupe is sewn into the “toe” of the tube; it's enclosed in a 4.5cm diameter soft rubber eyepiece with a 2cm lens opening. The lenses can be popped out of the eyepiece for cleaning, and the 100% polyester sock can be hand- or machine-washed once the lenses are removed (just be sure to put them back in the same way: concave sides facing each other).

The lens quality is superb: there's no noticeable distortion or chromatic aberration, even when the lens is tilted or skewed. Even with my glasses on, I had no problem seeing the entire LCD screen, and it was crisp and contrasty from edge to edge.

With my glasses off, I could only focus about halfway down the hood; there's no diopter adjustment on the Sock-loupe. The pictorial instructions provided with the Sock-loupe indicate that it can be pulled farther away from the LCD for focusing; this might help a far-sighted shooter. For near-sighted folks like me, Mike Stevens suggests removing one of the two lens elements (making it a +3.5 diopter loupe); doing so worked fine for my left eye, but my right eye still needed a bit of help.

In short, if you have normal vision you're fine; if you wear strong glasses, operate while wearing them. The sock material conforms to the face and to eyeglasses with equal ease, so it's not a problem to wear glasses while shooting. 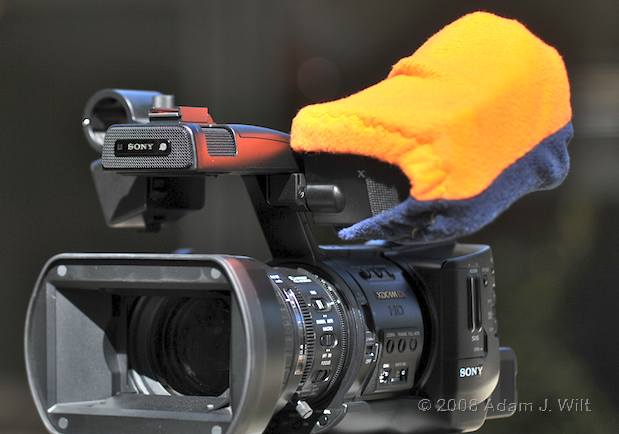 Black isn't the only color available. Pulling the Sock-loupe over the LCD blocks every bit of stray light.

There were only a couple of operational problems I had to watch out for:

Consider than both these problems arise only because the Sock-loupe does its job so well. (Consider also that I have to find something to complain about, or it isn't a proper review!)

Mike Stevens shoots “almost exclusively in the Mojave and Sonora Deserts where blazing suns make LCD use impossible”; he has been working on the Hood-Pro / Sock-loupe combo for five months, and has boxes of prototypes. That level of development shows: the sock material stretches laterally but not along its length; the total weight is 100 grams, to avoid stressing the LCD hinge; the seemingly-flimsy hood is actually robust enough to force flat and cram into a pocket; the rubber edge keeps the hood from sliding around on the LCD's frame. At first glance the Hood-Pro / Sock-loupe is a trivially simple device, but all the small details show that a lot of thought and refinement has gone into it.

This is the LCD accessory EX1 shooters have been waiting for. Not only does it give you an EX3-like EVF, it lets you handhold the EX1 more like an EX3: with a BP-U60 extended battery, it'll rest against your shoulder when your eye is at the Sock-loupe, while the rear-mounted finder sits against the side of your head like the EX3's cheek pad. 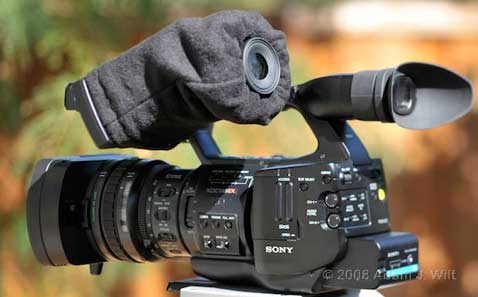