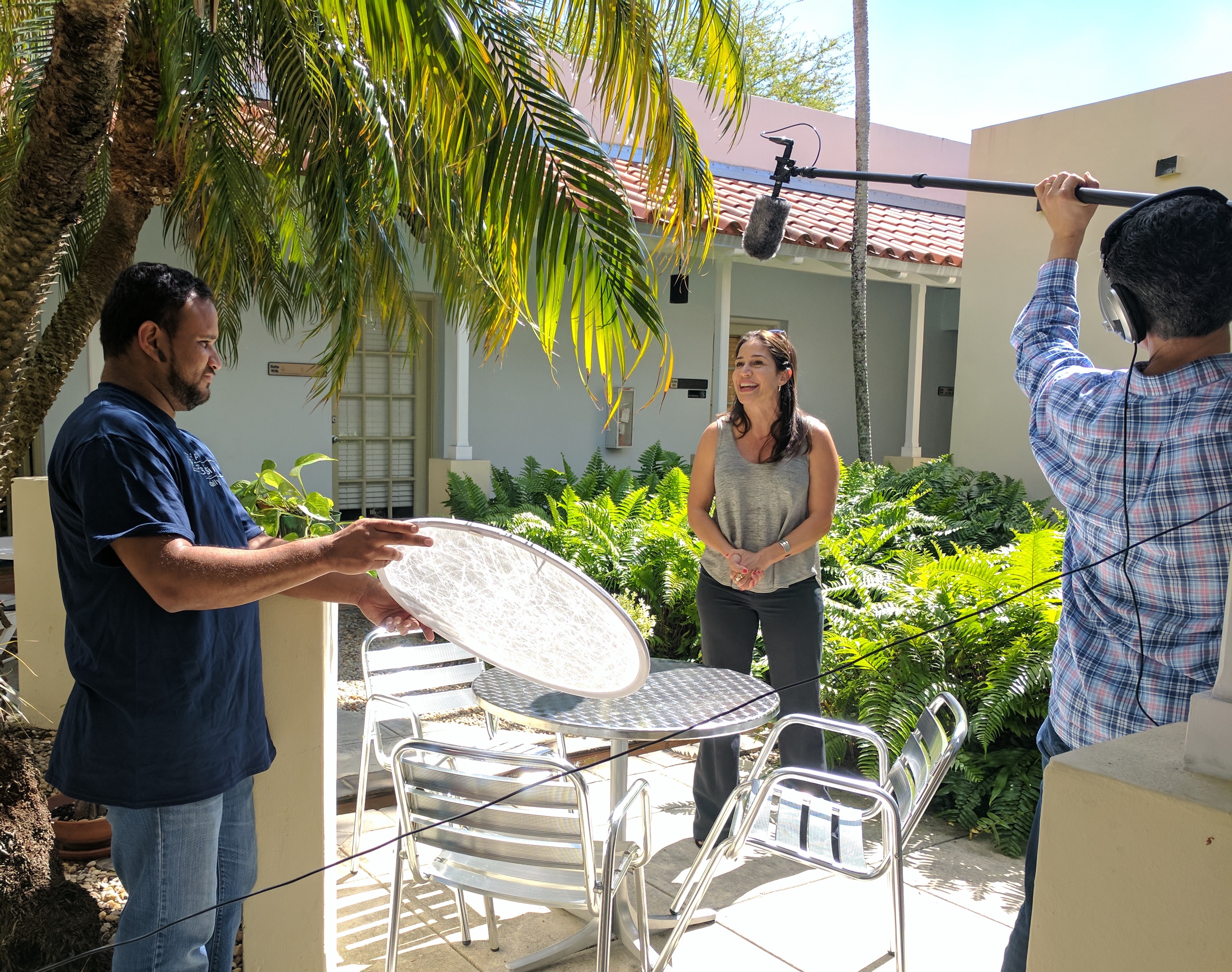 After the popular review of the Senal ENG-18RL dynamic interview microphone in 2016 (link ahead), now I’ll be covering the MC24-EL shotgun microphone from the same manufacturer. I’ll also cover several Auray accessories, including the CFP-58B carbon fiber telescoping boom pole with internal cable & bottom XLR base, the WSS-2014 wind protector with open cell foam matrix technology and simulated rabbit fur covering, the DUSM-1 shockmount, and the pistol grip, for those times when you are too close to the action to use a boom. This review includes both a field audio video recording and an indoor voiceover recording, with plenty of technical details of each production.

At this link, you’ll be able to see and hear my review of the Senal ENG-18RL dynamic omnidirectional handheld interview microphone from March 2016.

While dynamic omnidirectional handheld interview microphones certainly have their place (as indicated in the above section), shotguns do too, with their higher level output, wider frequency response and more more narrow pickup pattern, which combine to make them more useful at a longer distance. However, some people misinterpret that “longer distance” to mean a football distance away. That is not the case. Even with a shotgun, the closer the better, and that’s why a boom pole and a capable boom operator is used to hold the microphone just out of frame as shot with the camera, and properly pointed to the sound source. For best results the boom operator should wear isolating double muff headphones to confirm audibly that everything is perfect.

Ahead in this article, we’ll be covering the Senal MC24-EL shotgun microphone and the Auray CFP-58B boom pole, but first a few words about wind noise and how to overcome it.

Wind, and how to overcome it

Directional microphones are much more sensitive to wind than omnidirectional ones. That’s why while windscreens are required only in extreme cases with omnidirectional handheld ENG (Electronic News Gathering) microphones (except perhaps in the case of branded windscreens instead of mic flags, as I covered in Branded windscreen vs mic flag: let’s compare). As a result, wind protection is used almost always with shotguns outdoors, and sometimes even indoors. 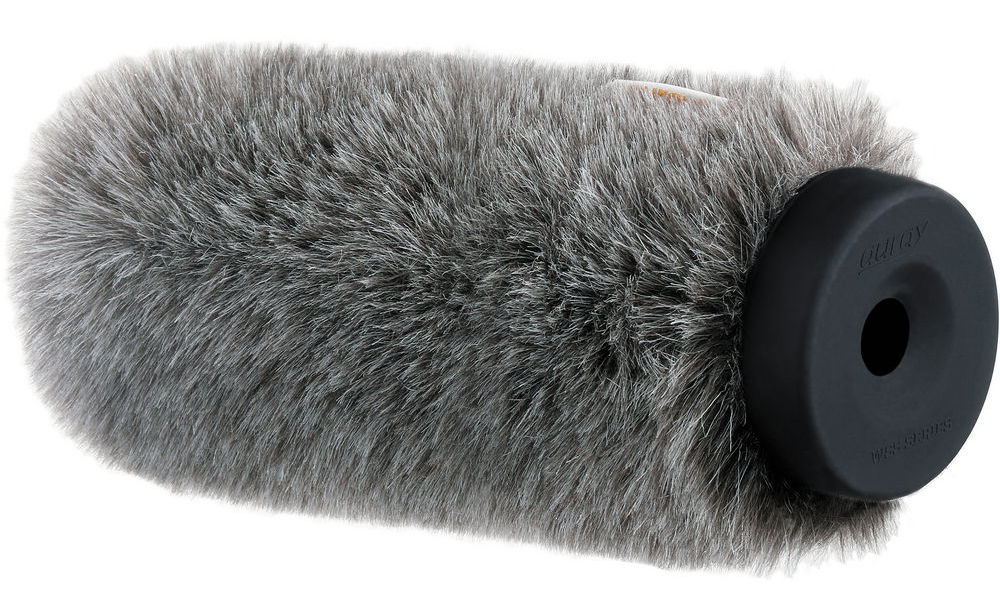 In the outdoor video that we created for this article, we used the WSS-2014 wind protector with open cell foam matrix technology and simulated rabbit fur covering, shown above, and below to show the internal construction. 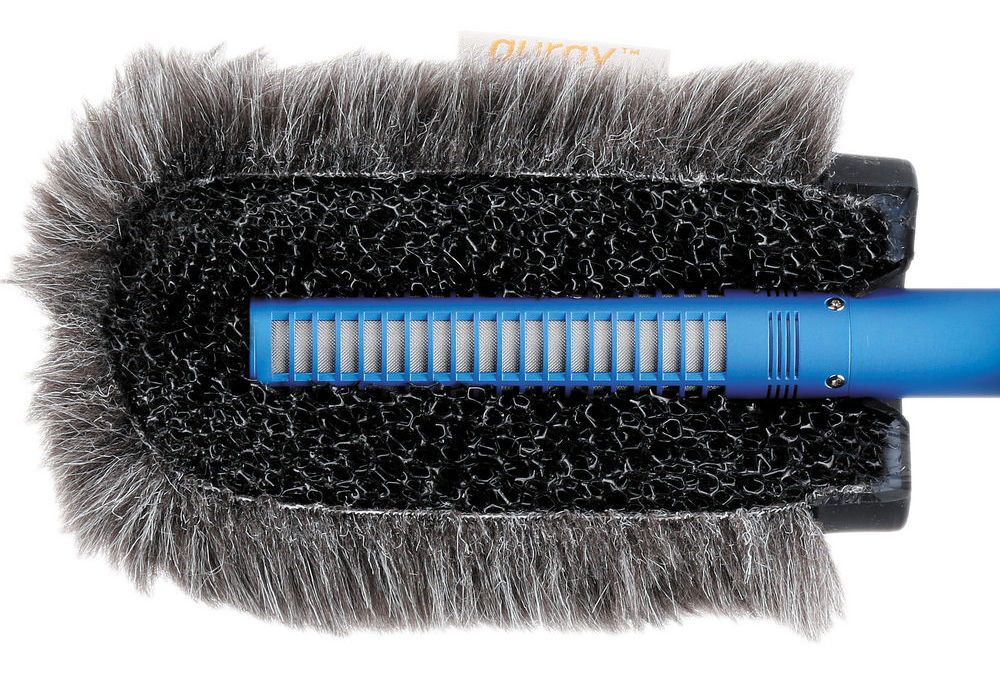 This type of wind protection is much stronger than a standard windscreen that typically comes with a shotgun microphone. According to the manufacturer, the WSS-2014 is most effective in light breeze to strong breeze conditions (4-25 mph or 6-40 kph) and users can generally expect a 24dB to 40dB reduction in wind noise with negligible dampening of high frequencies. 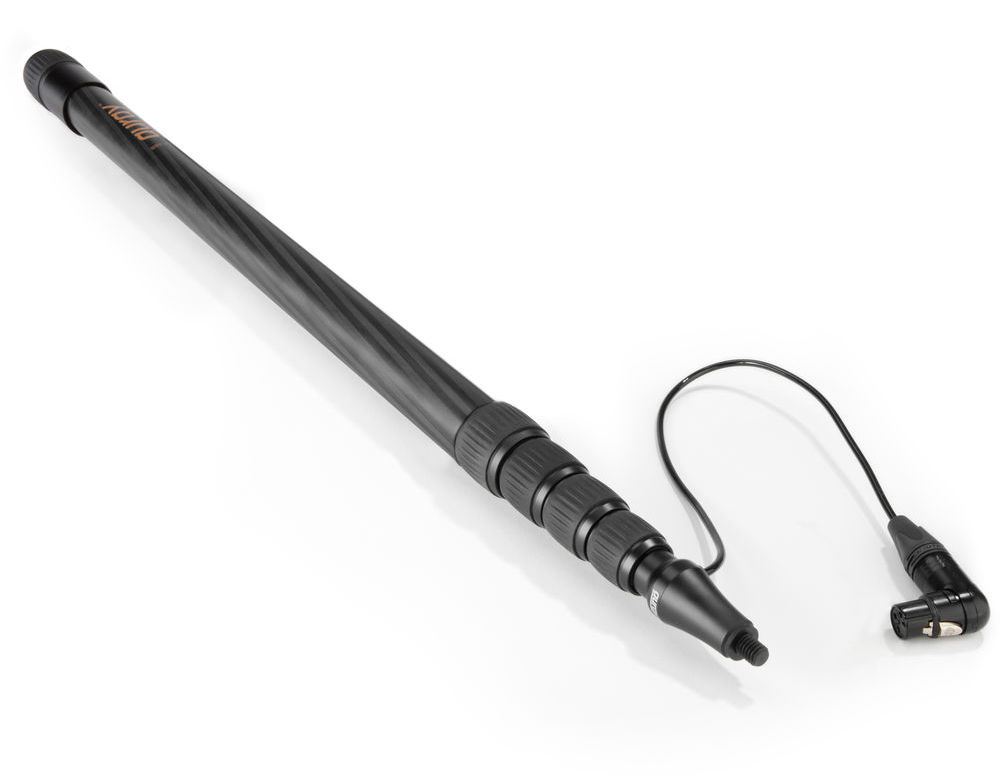 The 8 foot (2.4 meters) CFP-58B carbon fiber telescoping boom pole with internal balanced cable & bottom XLR base from Auray is lightweight yet durable. It features an anti-tangle integrated cable with triple strain relief system and anti-twist tube design. As explained earlier, it lets you place a microphone close to the subject while remaining at a distance or out of frame. I found it quite solid, and it has a three year warranty. 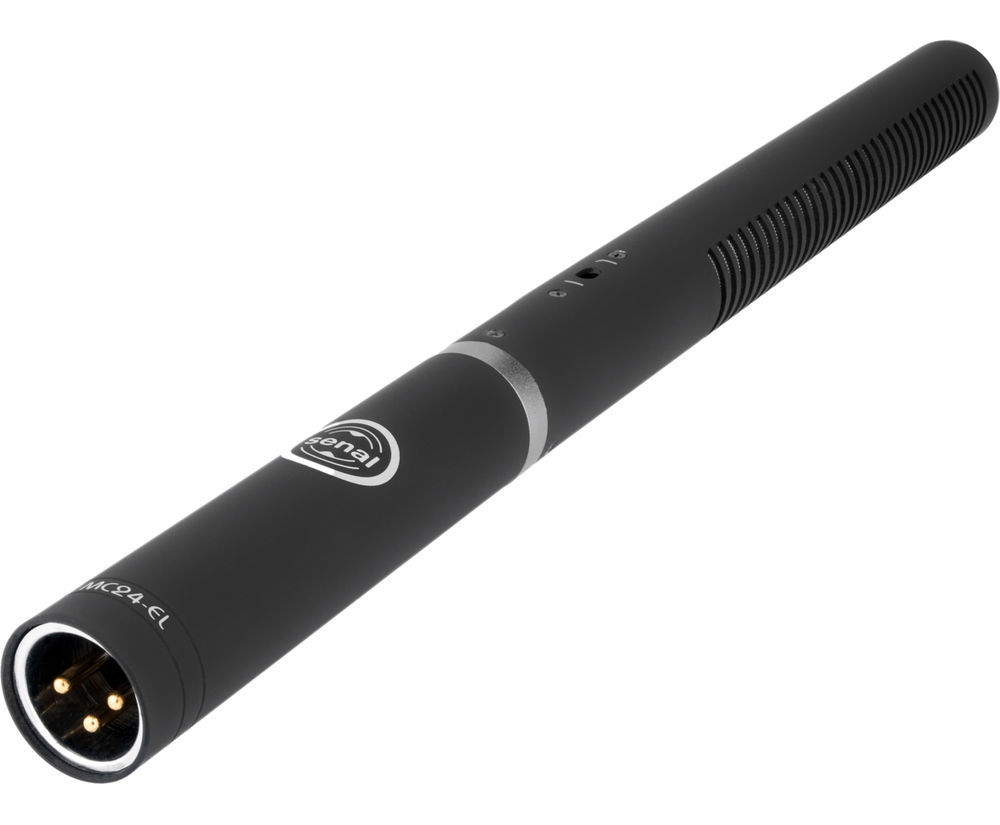 The Senal MC24-EL condenser shotgun microphone can be used either with phantom power or a single AA internal battery and is made out of brass. I found it to have great build quality, and ahead you’ll get to hear it, both outdoors with the WSS-2014 wind protector and indoors by itself with a voiceover. The MC24-EL has a published frequency response of 40 Hz to 20 kHz. It also has a a selectable high-pass filter (a.k.a. low cut filter) at 180 Hz to minimize unwanted noise and rumble.

The MC24-EL comes with a two-year limited warranty, leatherette pouch, a foam windscreen, a mic clip, and a 5/8 to 3/8″ adapter. I didn’t use the included windscreen, since I used the WSS-2014 wind protector (covered earlier in this article). 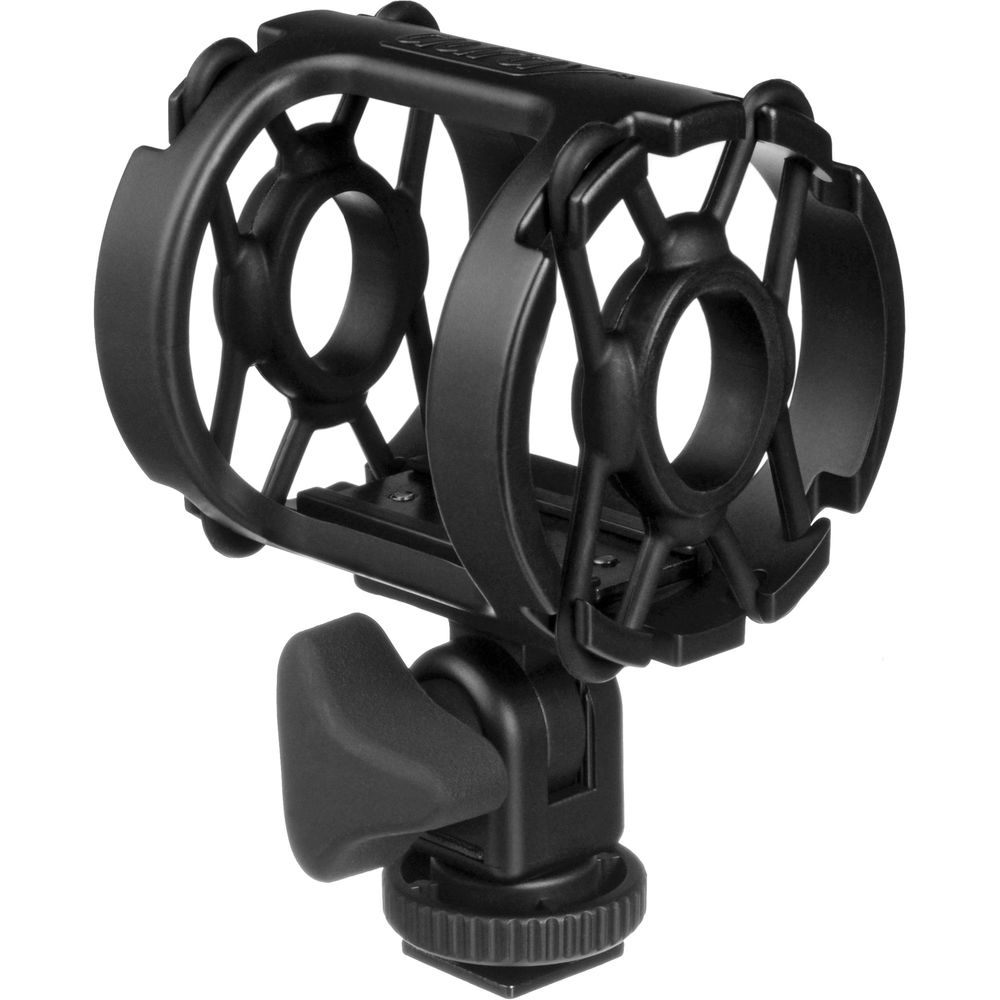 Instead of the included mic clip, I used the Auray DUSM-1 universal shockmount (shown above), which features a four-point suspension to accommodate shotgun and other cylindrical microphones measuring 19-25mm (0.74-0.98 inch) in diameter. The DUSM-1 is easily angled with its rubberized adjustment knob. The DUSM-1 has a built-in shoe for camera mounting, and a 3/8″-16 thread connection at the base to mount the shockmount to boom poles like the CFP-58B (covered earlier in this article) and… 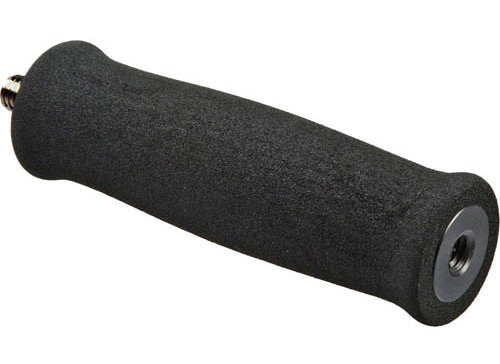 hand-grips like the Auray Universal Microphone Pistol Grip (shown above). 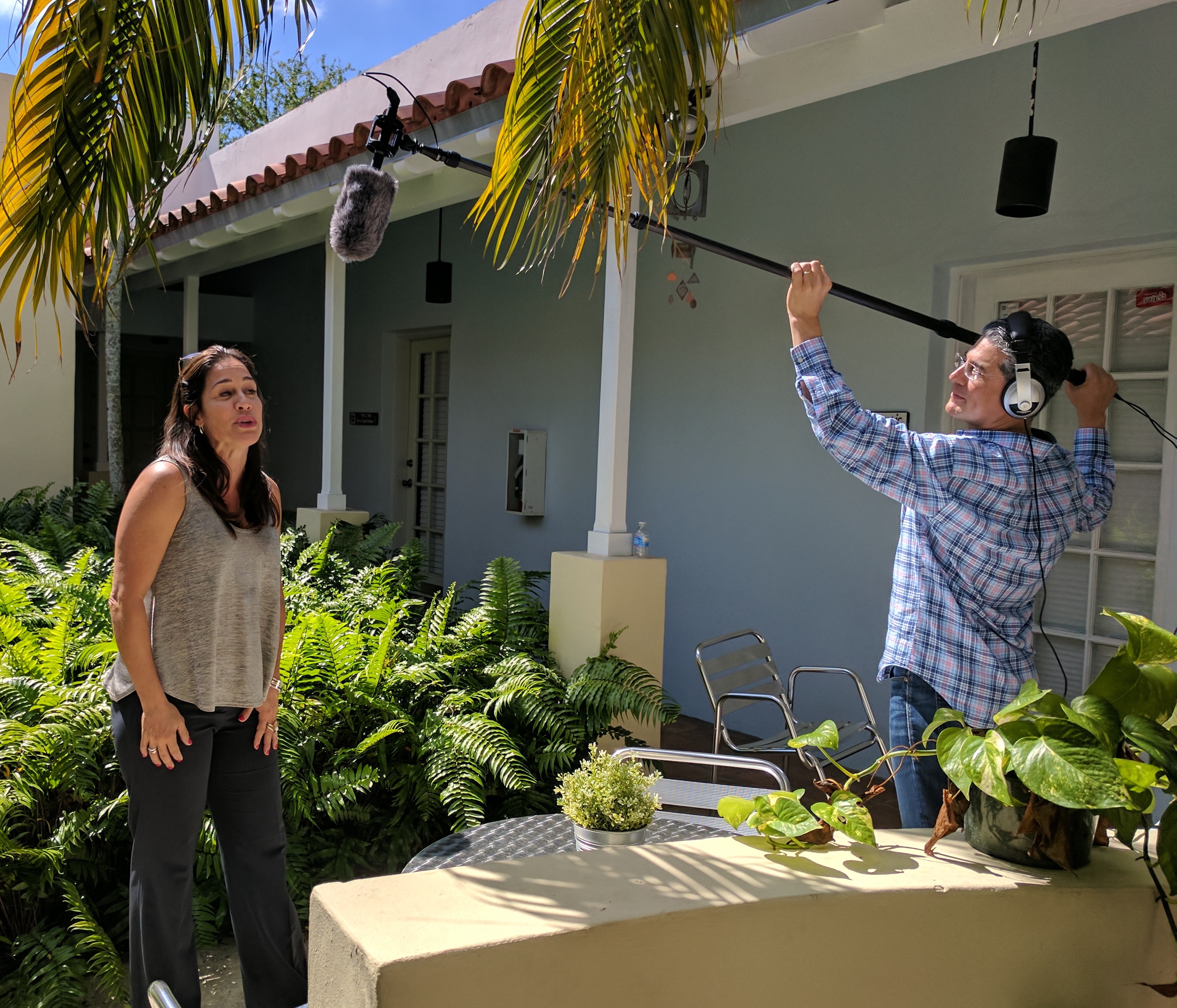 This photo —and the main image of this article— were both shot by Allan Tépper using the native camera app in his Google Pixel XL smartphone, and later cropped with the Apple Preview program, which is called Vista Previa when Mac OS is displayed in Castilian.

The outdoor shoot was made possible thanks to Emmy-award winning actor and voiceover talent Memo Sauceda (who had several roles as indicated below), CC Limardo, studio owner and VO specialist at Elitemusic Studios (who is the on camera talent in the video) and audio/video editor Rafael Pereira (who held the reflector to improve the image). Memo Sauceda had multiple roles in the production, since he brought his iPhone 7 Plus (which was mounted on a tripod the entire time) and also acted as boom operator. The un(wo)manned iPhone 7 Plus ran the FiLMiC Pro app to record 1080p video at ±30 frames per second (as I have explained in prior articles, iPhone recordings use variable framerates, and as a result, even FiLMiC Pro recordings have only a target framerate, which can be corrected in post to match standard framerates like 29.97p, as I did later) and at 48 kHz audio sampling. The video was shot at 50 Megabits per second for maximum available quality offered by FiLMiC Pro for 1080p, and the audio was recorded using ALAC (Apple Lossless Audio Codec), both by FiLMiC Pro in a combined MOV file. 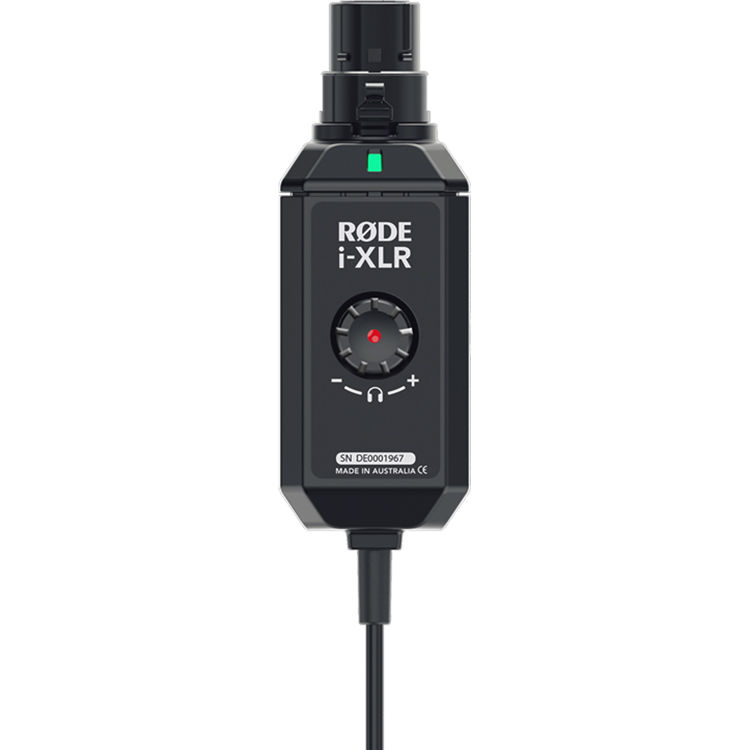 The Senal MC24-EL condenser shotgun microphone was connected via XLR through the boom pole cable to the RØDE i-XLR preamp and A-to-D converter (shown above, fully reviewed here), which delivered a 48 kHz sampled digital signal to the iPhone 7 Plus via the Lightning port, and simultaneously provided a monitoring 3.5mm output for Memo Sauceda to listen via a double-muffed isolating headset. Even though the i-XLR doesn’t officially offer phantom power, the Senal MC24-EL is one of those exceptions to the rule, and the mic was powered and worked perfectly without any battery inside, thanks to the i-XLR’s unofficial power for certain mics. (That was not the case when Memo and I tried to test his Sennheiser MKH-416 shotgun mic to the i-XLR: It provided no signal.)

In post production, I received the raw, unedited 1080p MOV file (with embedded audio) from Memo Sauceda via a popular file transfer service, and this time I decided to use ScreenFlow to edit. I chose to create a 720p project so I could blow up the video without loss for that final resolution, in essence, cropping it. One motivation to use ScreenFlow rather than any other editing program was that I was anxious to test Larry Becker’s excellent method to create advanced animated lower thirds with ScreenFlow, as you’ll see here:

The following voiceovers were recorded sequentially at 48 kHZ (see my article All audio production & distribution should go 48 kHz.). Each microphone was connected to a Behringer X Air XR12 12-input digital mixer (covered here, here, and here), which supplied 48-volt phantom power and recorded uncompressed WAV files to a USB memory drive. All of the voiceovers are by Memo Sauceda.

Senal SCM-660 US$199.99 large-diaphragm multi-pattern condenser (to be reviewed soon)

IK Multimedia iRig Mic XLR US$99.99 (to be reviewed soon)

Thanks to Memo Sauceda for your words and performance.

I am impressed with the build quality of all of the items reviewed in this article. I am also impressed with the audio quality and price performance of the MC24-EL shotgun microphone. If you are considering purchasing a shotgun of any brand, this model should certainly be on your short list of candidates, as should be the Auray CFP-58B boom pole.