An all-in-one camera for broadcasting and streaming 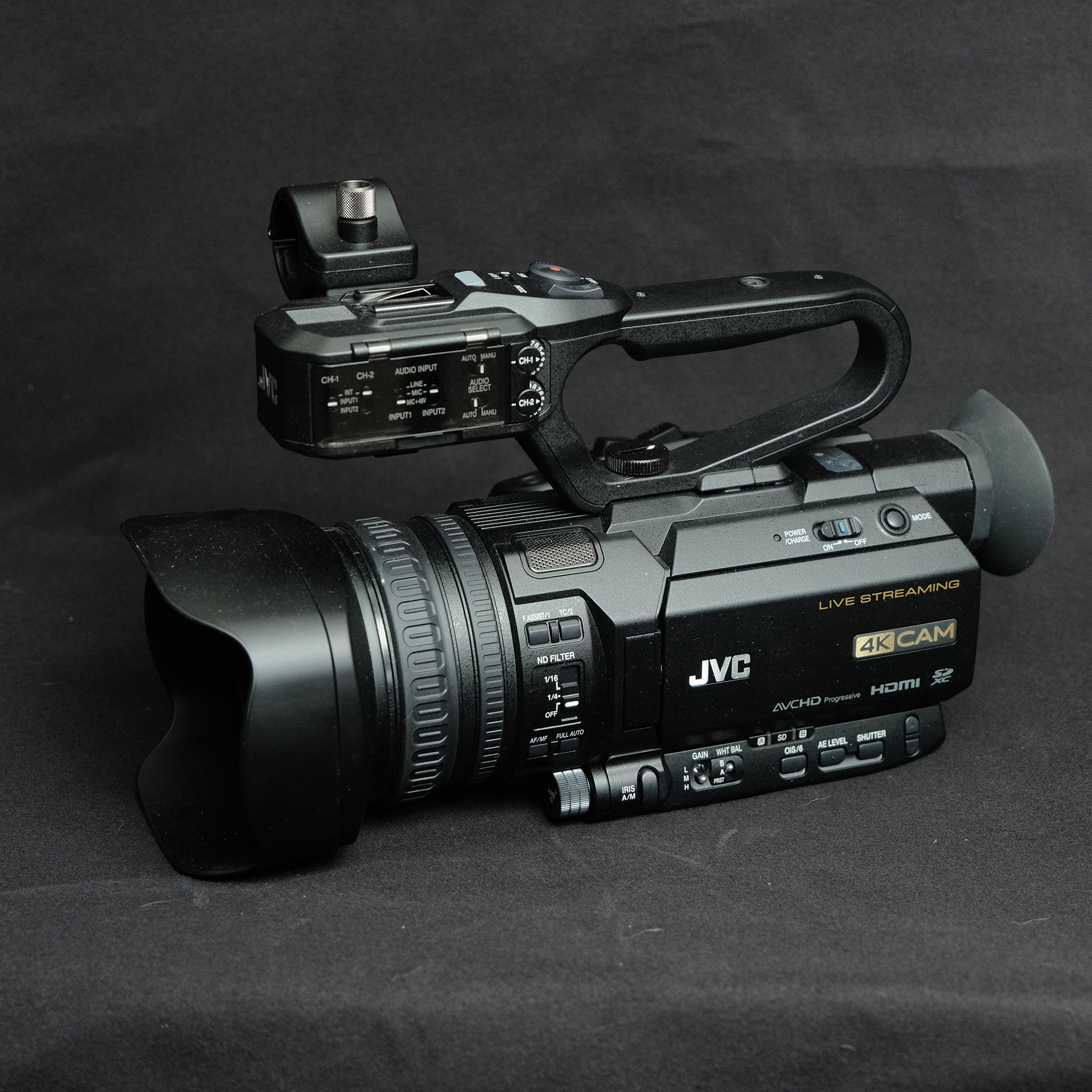 Today, almost everything is recorded. If people are there, it will be filmed. For events, sports, news, or streaming, camcorders are an all-in-one solution that makes total sense. I rarely work in those fields but JVC reached out and asked if I wanted to check out their camcorder, the GY-HM250U and -up for anything- I said of course.

From the Press Release:

The JVC GY-HM250 4KCAM works as any other camera when connecting to Facebook, and while streaming to Facebook Live, users can record high quality video to dual SD memory cards. It records in a variety of file formats and frame rates, including 4:2:2 recording for 4K/30p and 4K/24p. Other features include dual XLR audio inputs, integrated handle with hot shoe and dedicated shotgun mic mount, viewfinder and LCD displays, and 4K/60p HDMI output.

Joe D’Amico, vice president, JVC Professional Video. “The GY-HM250 camcorder family was designed with built-in streaming, built-in graphics, and XLR audio connections – so one camcorder can create a complete production for sports, worship, and news coverage. No other camera on the market makes it this easy to connect with Facebook Live and deliver professional audio and video results.”

Truly, a camcorder is about getting the shot first and foremost: news, sports, streaming, anything where control of the image is more in the “is it exposed and in focus?” category and less about falloff and bokeh. One time I spent a day shooting a medical instruction video with a company that does it exclusively, and they were using an older camcorder; it had to be clear and it had to be in focus. It’s education not stylistic. That being said, as a cinematographer I did give the image a proper once-over.

First thing I did, though, was check out the camera itself and the usual camcorder features stood out: the integrated 12x lens, Gain and White Balance toggles, the green slider-button for power, everything was there. Aside from that (and the integrated lens is an essential “aside”), it has features you’d expect in a production camera: ND filters, XLR jacks, proxy generation, an 4K 4:2:2 150Mbps image, a Histogram, assignable buttons, Focus Assist, Zebra, even 3G SDI-out! My C100mkII doesn’t even have SDI-out. It isn’t too common on the lower-end of the price range but makes sense as this camera is designed for broadcast. 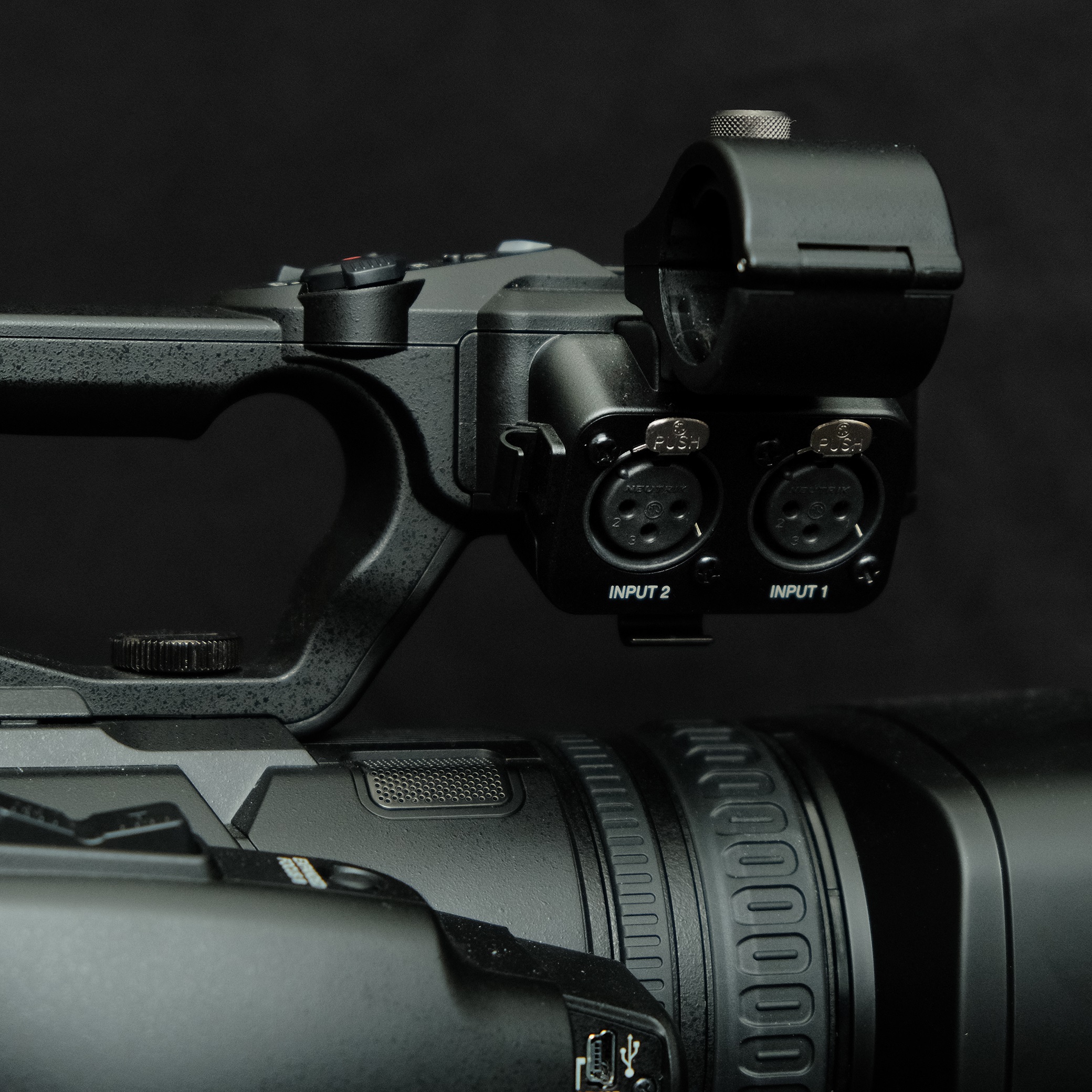 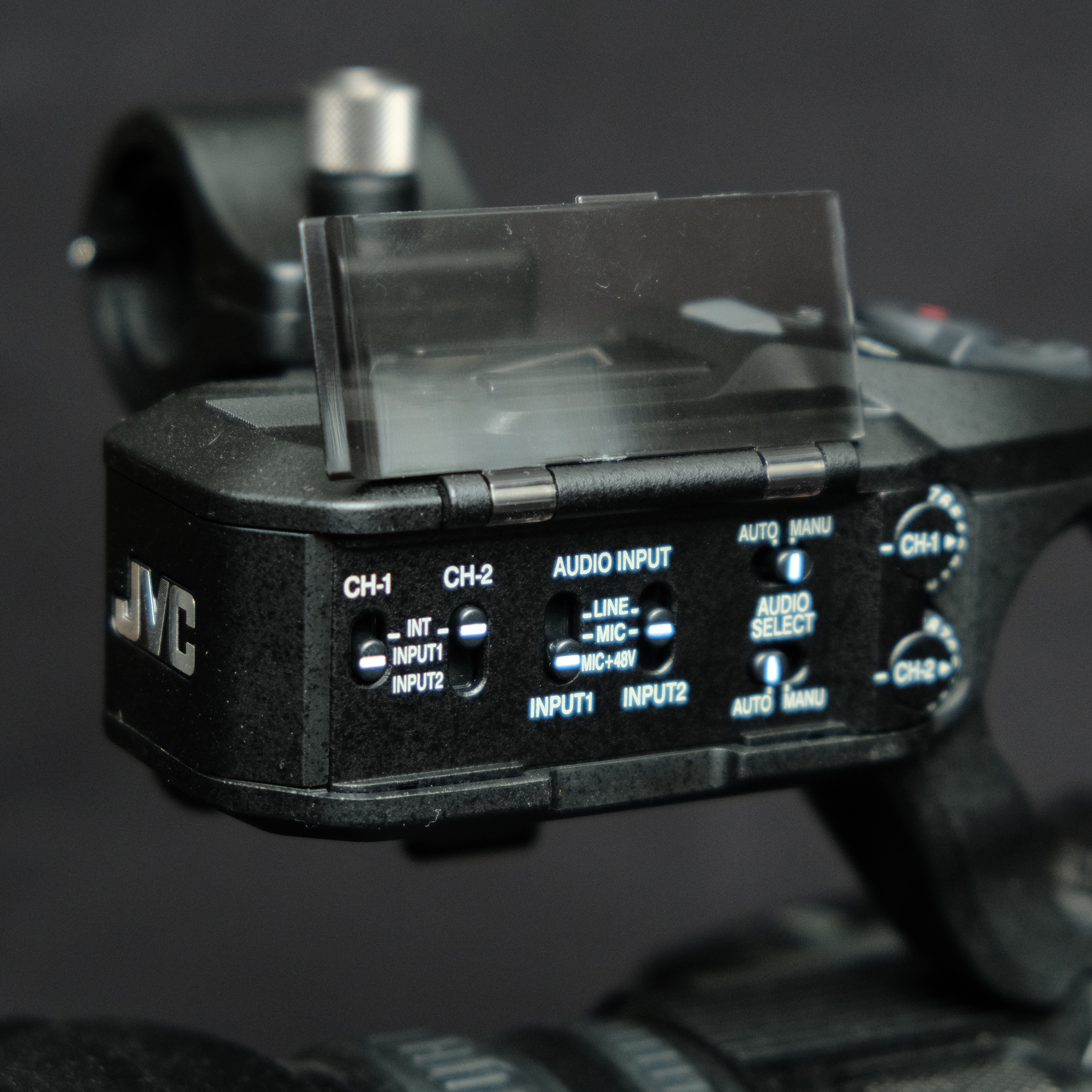 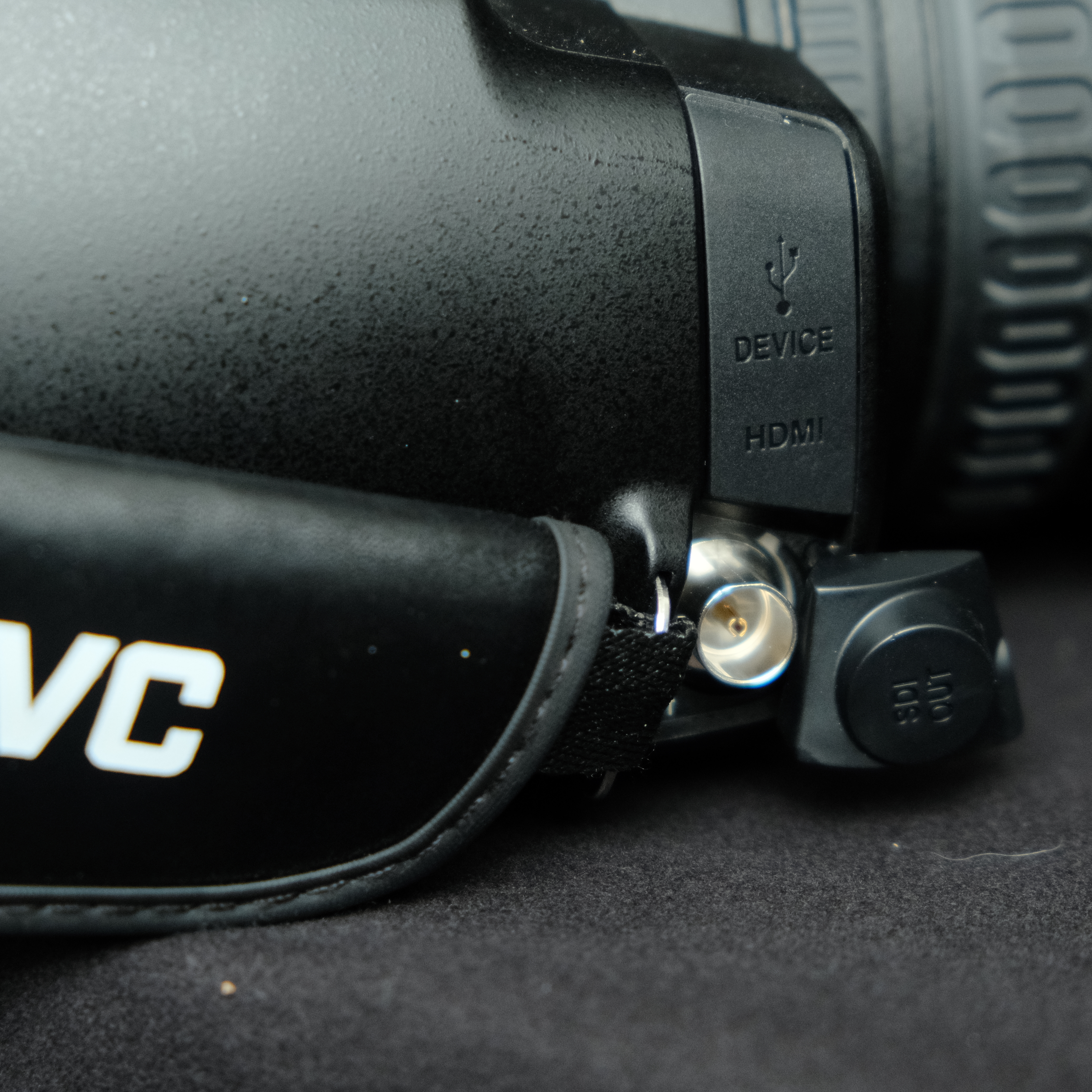 Now, it is a ½” sensor. 1/2.3” exactly. By comparison, the iPhone 11 Pro has a 1/2.55″ sensor. If you’re used to Super 35 that’s a big jump, but with sensors, bigger does not necessarily mean better if the quality of the sensor is high enough. A smaller sensor also means that you’re likely to get your subject in focus without much dilly-dallying. For most broadcast uses that’s a good thing. Your image ends up a little grainier, but in this case it only really seems to be the case in underexposed areas.

As far as the image itself is concerned, it actually surprised me. It doesn’t have the most dynamic range in the world (maybe 8 stops? educated guess?) but when your image is exposed it’s great. Backlit subjects even handle pretty well, but I’d say be sure you don’t blow out. You can recover more from the dark areas than the bright ones. Even in a cinematic lighting situation the image can be gently graded for a nice look, but overall you’d be best served by giving yourself as much light as possible and leaning on the NDs or aperture if need be (although there is a “LoLux Mode” if you need it) and leaving your Gain on zero if possible. 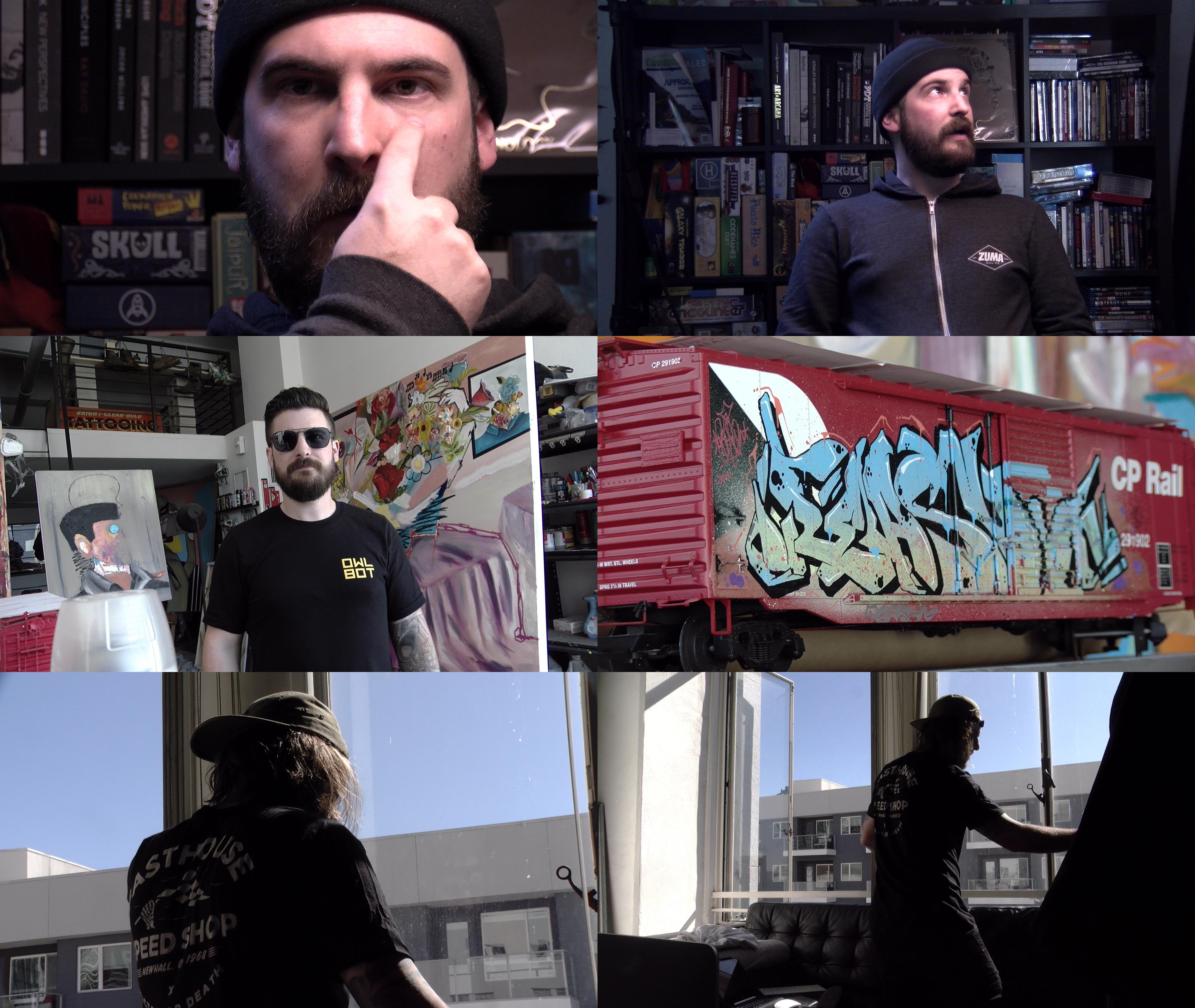 In the menus you’ve got standard image controls like Gamma (Standard or Cinema), WDR, Color Matrix (Natural, Cinema Subdued, Cinema Vivid, and Standard), as well as knee/black/toe/WB bias etc. so even if you are going full-auto, you can dial-in your image a bit. You’ll have to separate your backgrounds with light and production design instead of depth of field, but other than that the picture is pretty nice. The menus themselves are a little cumbersome, making it difficult to do things like switch between shooting formats easily, but once you’re set everything you need to shoot is on the camera so you won’t be hung up in the middle of a shot trying to change your f stop or what have you. A camera like this tends to be set on one setting and left alone, so this may not be too big of an issue. 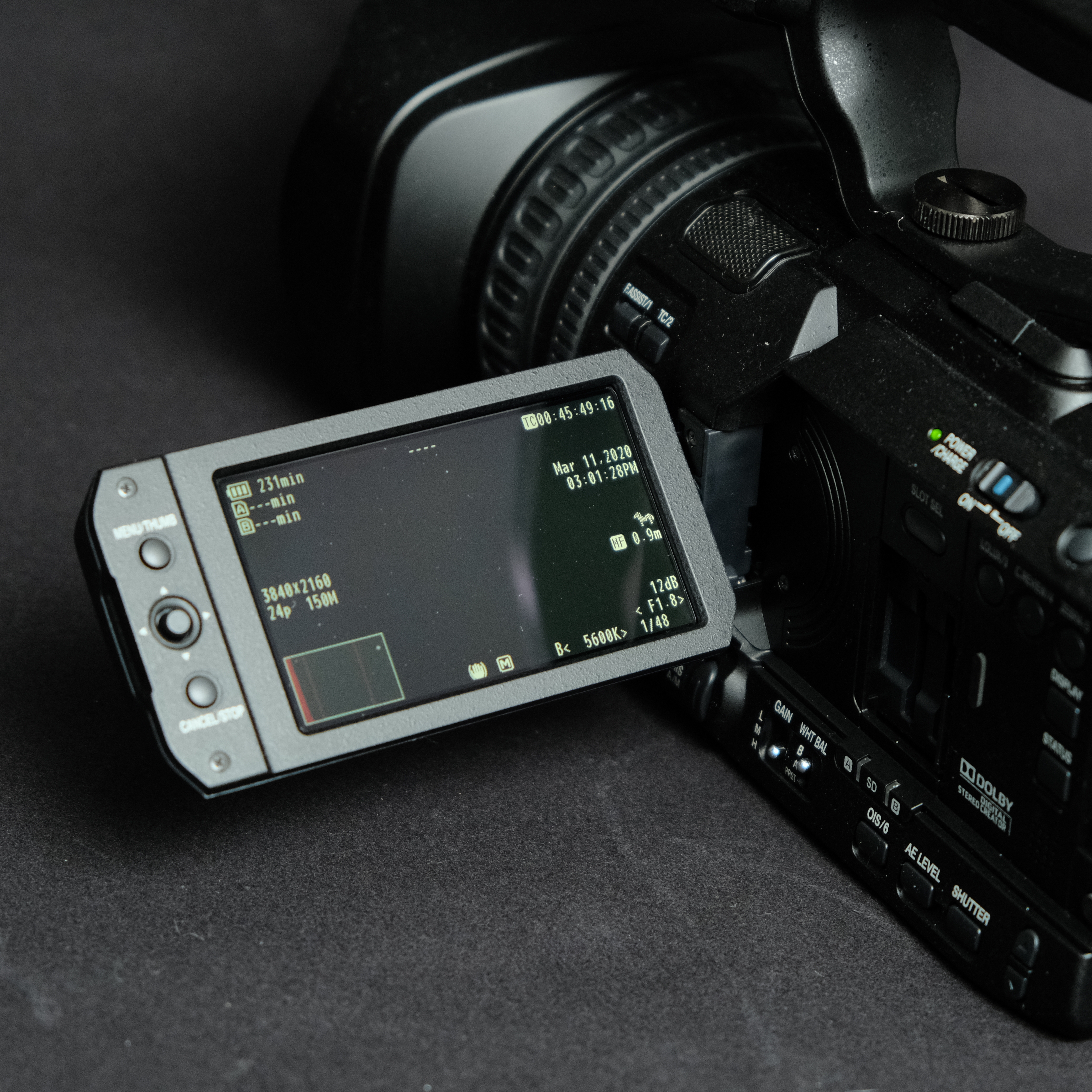 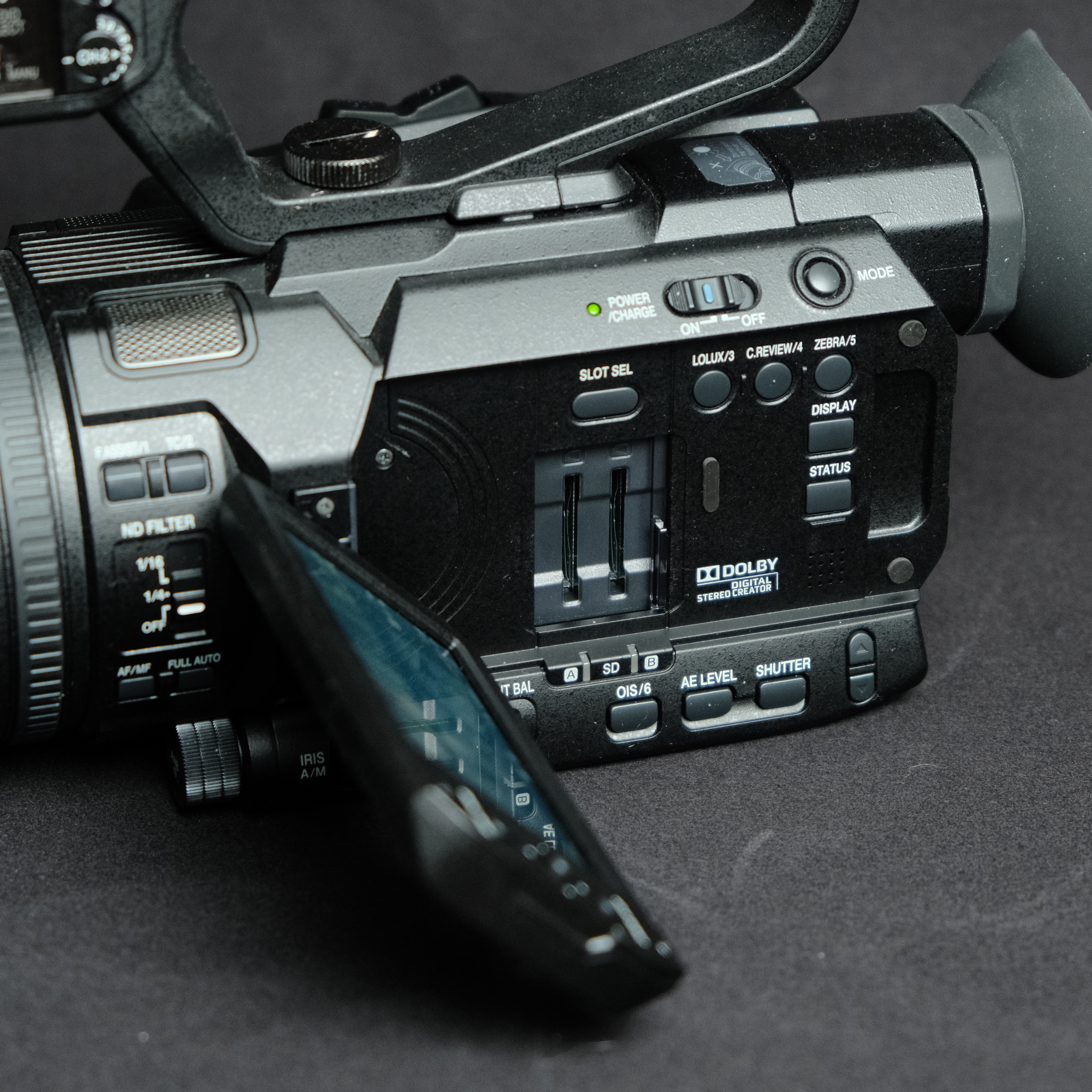 A small detour: for Sports/News/Church this doesn’t matter, but for anyone looking at this camera from a filmmaking perspective this might help visualize the key lens differences. If you’re used to S35, this camera has the equivalent of an 18-205mm f/1.2-3.5 lens. Exposure-wise that’s pretty solid, but that means your depth of field (or more specifically, your perception of it) will be more like an f4.5-13. You’re still letting in “f1.2 amount” of light, but you’ll have the bokeh of f4.5. Roughly. At the end of the zoom, where f3.5 lives, you’re more in the f13 area but again, only in regards to the blurriness of your background not your exposure. Your actual depth of field is still “f1.2 ammount”. That being said, you’re also at a 205mm equivalent at full-telephoto, so there’s going to be some decent compression if you need it. Again, camcorders are almost built to avoid blurry parts of the image.

But, of course, some things stood out that were frustrating. The screen is a trouble spot for me, for instance. It’s not very sturdy, and I don’t feel like I can trust the display itself to be accurate. The image looks way better on my computer than the screen (thankfully). An external monitor may or may not be necessary depending on how you’re using the camera. While it shows what f-stop and shutter speed you’re at, there’s no display for focal length and there’s just a zoom bar, but that’s more of a filmmaker concern. I also wasn’t thrilled about the power situation. The camera takes longer than you’d expect to boot up, and while the included IDX battery powers the camera for a few hours, you have to charge it in the camera. You use the same cable to power the camera from the wall, and I suppose that’s most likely how this camera will be used (plugged in) so, c’est la vie.

Something that stands out on the positive side is the ability to live stream via a USB dongle (I was sent Hawking HD65U to test it with). I don’t have a Facebook, which seems to be the main “angle” JVC has taken here as there’s a “FB Log-in” toggle in the streaming menu, but I was able to stream to YouTube after having to do a lot more research than I’d hope to. Nothing is in the manual about how to actually go about streaming and even as a self-described tech expert I had trouble figuring it out, so just in case you’re wondering:

It’s tedious, but once you’ve done it it is saved so that’s nice. It’s really just all the joystick typing that’s less than ideal. The stream was nice and clear, though, and the audio came in just fine. If you were using a 4G connection this could be a great thing for Newscasters, as nowadays I’ve seen them using iPad setups of all things. For a Streamer/YouTuber type this could be a great option too, depending on how much on-screen display stuff you require and how easily you can integrate that in to your workflow. The camera works with OBS so, assuming that’s your streaming software of choice, you should be in good hands.

You can do overlays like lower thirds and scoreboards in-camera but to be perfectly honest with you true believers, it was more complicated than I was willing to deal with and the information was difficult to find (you need to realize you need -and then find- the “SDP Gen app” to start). If it was crucial to your work to run your graphics in-camera, god speed. They do say you can update the scoreboard live from your iPad or what have you, so that’s cool. There’s also “Scorebot” which somehow connects to the camera via traditional scoreboard software in stadiums (again, out of my purview), but in general I feel like you’d be better served using more traditional OSD methods.

The GY-HM250U from JVC seems like a great option for in-house productions, news gathering, live events, and stuff like that where ease of use, speed, and portability are big factors. This thing can be chucked in a backpack to take on the road or rigged up to use in a theater, making it really versatile for all kinds of shoots. Heck, even It’s Always Sunny shoots on camcorders. I will say, one thing I didn’t expect was the “fun” factor. I let my friend Chase give it a whirl on a different camera test and he was shooting everything in sight and laughing the entire time. There’s something to be said for a camera that is borderline “set it and forget it.” It makes the creating more accessible to be sure, but also makes it so people can just get the work done and focus on what they’re doing instead of worrying about the gear. Cinema cameras are designed for ultimate control, whereas cameras like this are designed to get the image on tape (or on card, in this case). Having everything you need built in to one camera does have its advantages!