Learn about this fascinating vintage USB-C microphone, and listen to its sound. 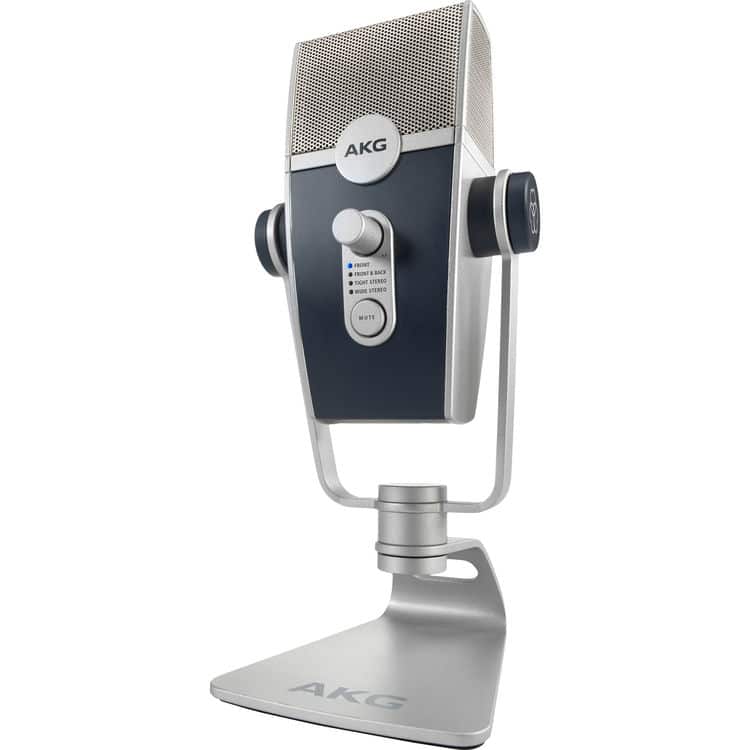 The AKG Lyra microphone has a striking, vintage-looking yet state-of-the-art look. Unlike many inexpensive replicas of the Elvis type (rounded) mics, which look nice in photos but cheap when seen in real life, the AKG Lyra appears to be just as authentic and solid as they appear in promotional photographs. Because of the unusual terminology AKG uses to describe the Lyra’s multiple patterns, it is not always obvious what they mean. However, AKG’s visual diagrams are indeed accurate, so I’ll provide my translation from AKG Lyra terms to standard industry terms. Read ahead to learn how this mic interfaces via USB-C, how compatible it is with different mobile devices, how it sounds with different pickup patterns and situations, and how its inboard latency-free monitoring works.

AKG officially offers the Lyra (US$149 , Amazon — B&H) to be compatible with Android 9+, iOS 10+ macOS 10.7+ and Windows 8+. I suspect that it will also work fine with Chromebooks too, as I have used several other USB microphones and interfaces with Chromebooks with no problems.

As you’ll conclude, the AKG Lyra offers a smoother connection with conventional computers with any type of USB connection, but for tablets and phones, it is much simpler and smoother if the tablet or phone has a native USB-C connection.

Following are AKG’s officially labeled Lyra patterns (in bold), and their translation into industry-standard terms:

Despite the confusing Front & Back designation, AKG does illustrate it accurately in its diagrams, as shown below. I wish it included true figure-8 in addition to omnidirectional, but it doesn’t. 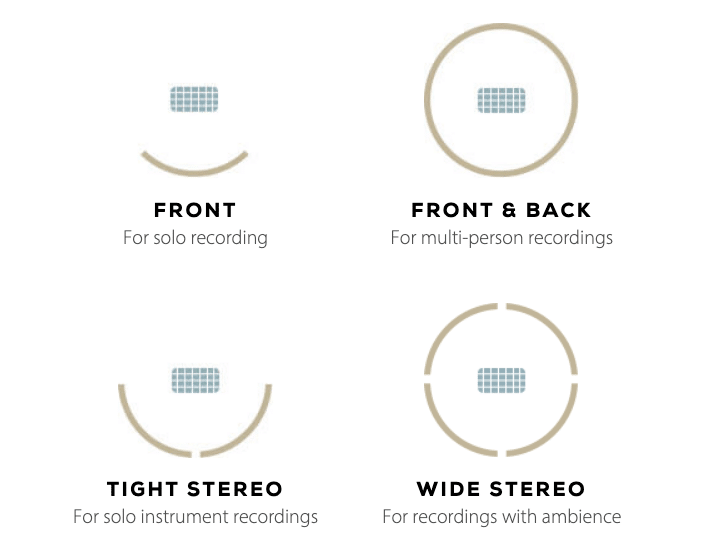 I believe the AKG Lyra is the first digital microphone I have ever tested so far which includes the very modern USB-C port. (The second USB-C mic I’ll review next will be the RØDE VideoMic NTG shotgun, which I just received from Australia. That’s a very different microphone.) However, the only supplied cable that comes with the Lyra goes from USB-C to USB-A, as I clarified in a prior section of this article.

I am happy with the variety of sampling rates and resolutions, although I only tested using our standard 48 kHz/24-bit (see Enter the 48 kHz alliance). That being said, AKG states that Lyra can go up to 192 kHz/ 24-bit. (192 is exactly 48×4.) I could only justify recording such a high a sampling frequency if you plan to use slow motion as you edit your audio recordings (or audio/video recordings). In addition to our standard 48 kHz and the whopping 192 khz, the AKG Lyra also offers 44.1 kHz (which I would never use for the reasons stated in Enter the 48 kHz Alliance), 88.2 kHz (which I would never use either, since it isn’t a multiple of 48, but of the dreaded 44.1 kHz) and 96 kHz (which is fine for up to 2x slow motion for a 48 kHz project).

As I have covered in prior articles, to set your audio sampling on Android or iOS, simply select it in any of the recording apps that offer such an audio sampling selection (i.e. Auphonic, FiLMiC Pro, FV-5 Cinema) or use an app that uses 48 kHz exclusively, like the RØDE Reporter app. (Stay away from the native camera app or GarageBand, which only support 44.1 kHz, which is kryptonite for video production.) 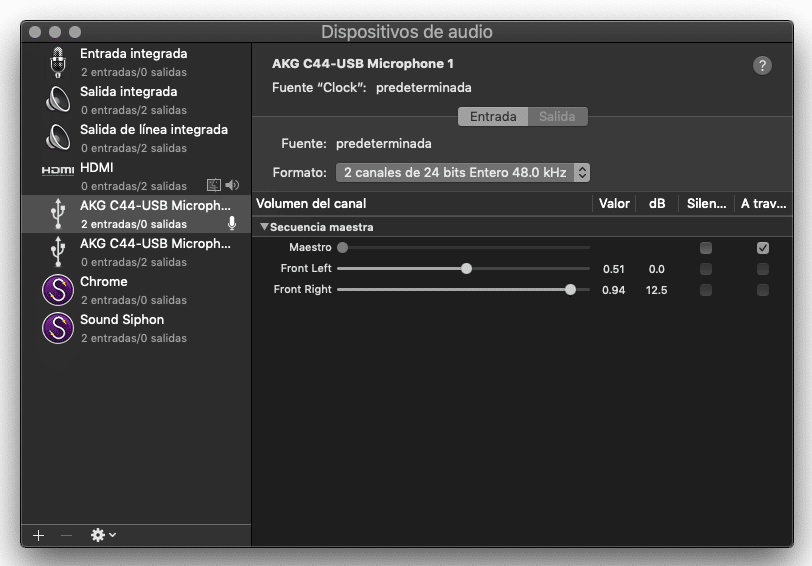 The 3.5 mm jack for monitoring is designed to be used with either TRS stereo headphones or even with TRRS headphones with a microphone included. The AKG Lyra is fortunately designed to ignore the microphone on a TRRS headset, if present, while outputting the latency-free audio.

I call it bullet-proof since it solves the issue discussed in my 2015 article TS/TRS/TRRS/TRRRS: Combating the misconnection epidemic (illustrated above).

The same 3.5 mm jack also works just as well for playback monitoring, as long as your app and system are set to send audio playback to the AKG Lyra.

AKG says that the Lyra has a built-in shockmount. In my testing, I discovered that shockmount to be ineffective, so be careful about banging the microphone or table. Note that if preferred, you may remove the included base and instead mount the AKG Lyra onto a standard mic stand or boom.

AKG also flaunts the Lyra’s “proprietary Internal Element Overload Prevention”, which in the industry is usually called a hardware limiter. However, it doesn’t seem to function at all when I intentionally set the level too high as a test. It just clipped.

Finally, AKG address the “built-in sound diffuser” which “automatically reduces noise and improves signal levels for optimal performance”. I am not sure whether AKG is referring to the self-noise or acoustic noise.

Like many other studio microphones, the AKG Lyra advertises internal plosive/pop protection. Like nearly all the many studio microphones I have tested, the AKG Lyra fails to protect against pops and breathing when one is at the sweet-spot in terms of distance for best quality, even when addressing the Lyra at as a 45-degree angle… with normal speech. I checked with AKG, but currently, the company offers no windscreen that will fit the Lyra. (I do not go to the extreme of intentionally blowing into the microphone, which is something I have seen at least one AKG Lyra reviewer do.) 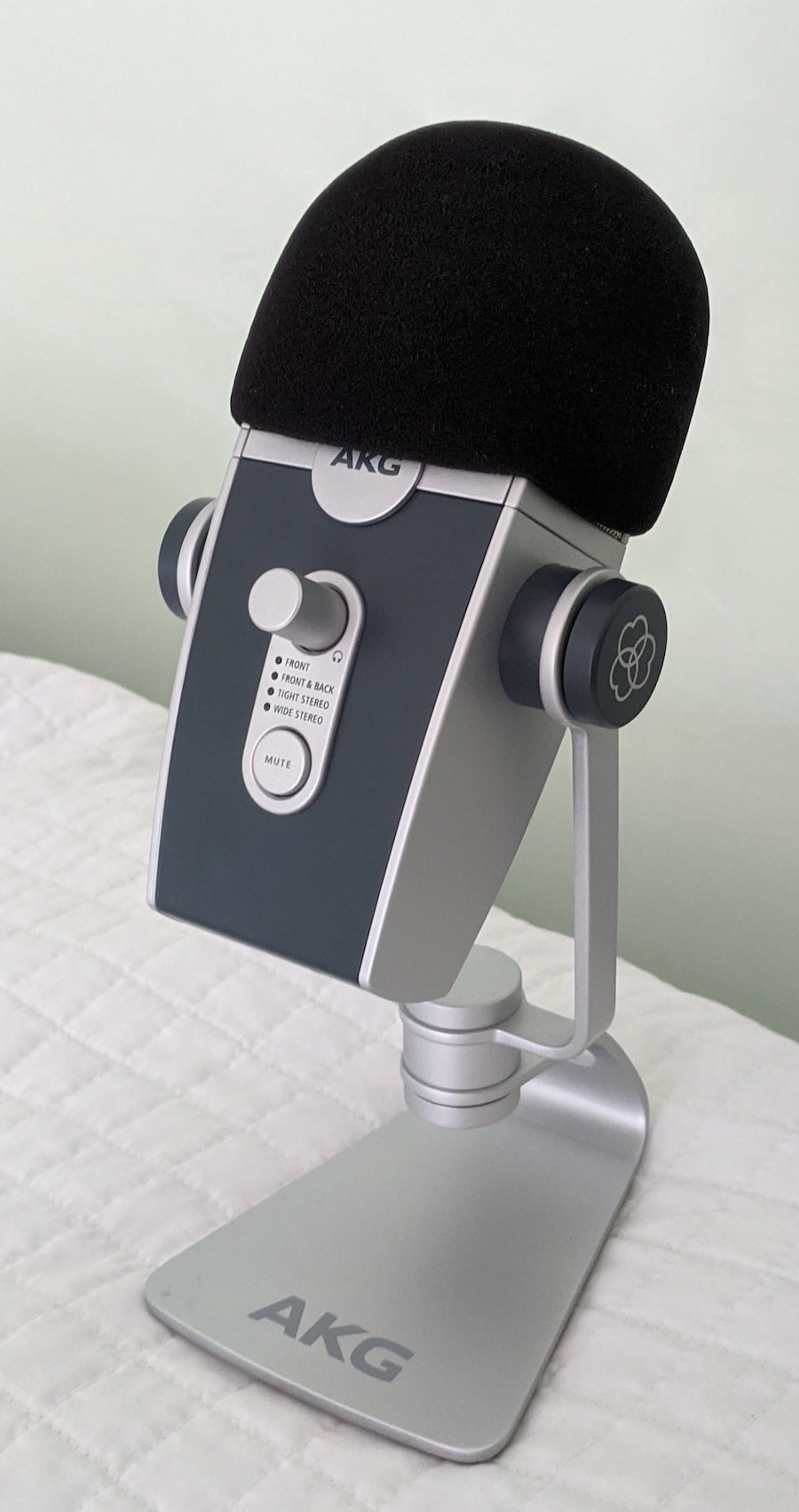 Fortunately, after some searching , I found a windscreen that fits the AKG Lyra perfectly. It’s the “Professional Foam Windscreen for Blue Yeti” from Vocalbeat. It currently costs ≈US$13 (Amazon link) and is available in three possible colors.

I can only presume that AKG had some of the following in mind when it says that the Lyra has 4K compatible Ultra-HD Audio.

As covered above, the AKG Lyra has all of this covered, although as I stated earlier, for spoken word, I would only justify recording at higher than 48 kHz if you plan to use slow-motion audio in post-production.

How the AKG Lyra presents itself to the system

Like most USB microphones I have tested previously (but not all), the AKG Lyra always presents itself to the system as dual channel (“stereo”) even when in one of its mono modes.

However, in order to save drive space and bandwidth when uploading a file, certain apps allow us to record in mono 48 kHz when recording from a “fake stereo” source. For example, in the Auphonic app for Android or iOS, just set Mono in the settings. In Hindenburg Journalist Pro (my favorite audio editing program for storytellers on standard computers, covered in many articles) is another audio program which gives us this option. 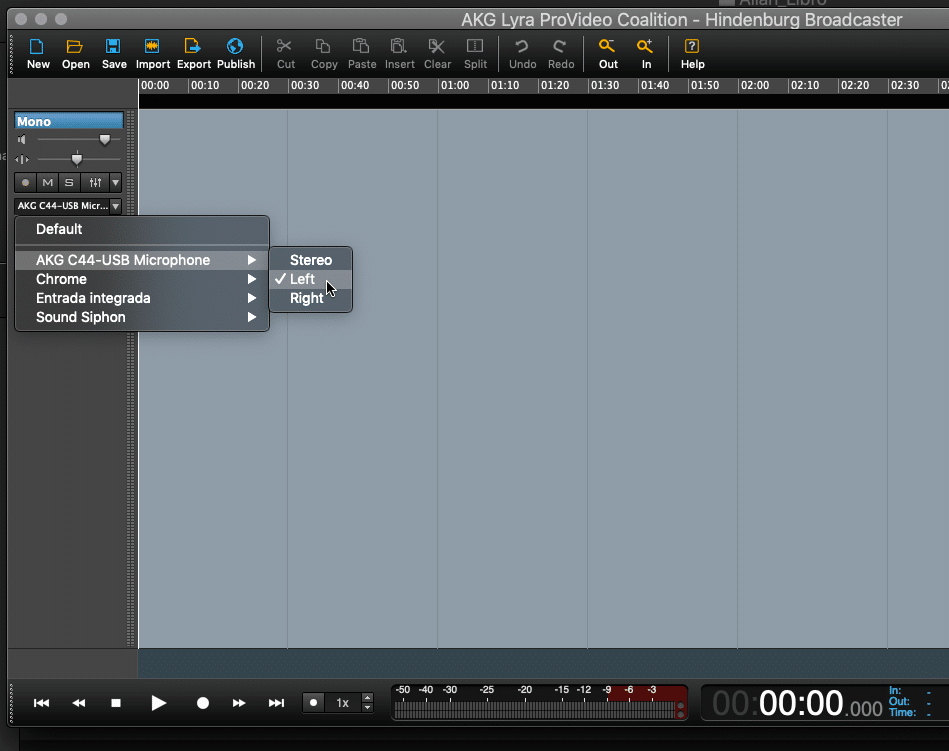 Above you’ll see how to do that in Hindenburg Journalist Pro (with your menus in English). Just choose either the “fake” Left or Right of the AKG Lyra when selecting the source. That way the recording will be half the size on your drive. In case you are wondering, Hindenburg Journalist Pro automatically treats recordings made this way as centered if exported or published in stereo. Below you’ll see it as it would appear if your menus are in Castilian (castellano), as mine usually are: 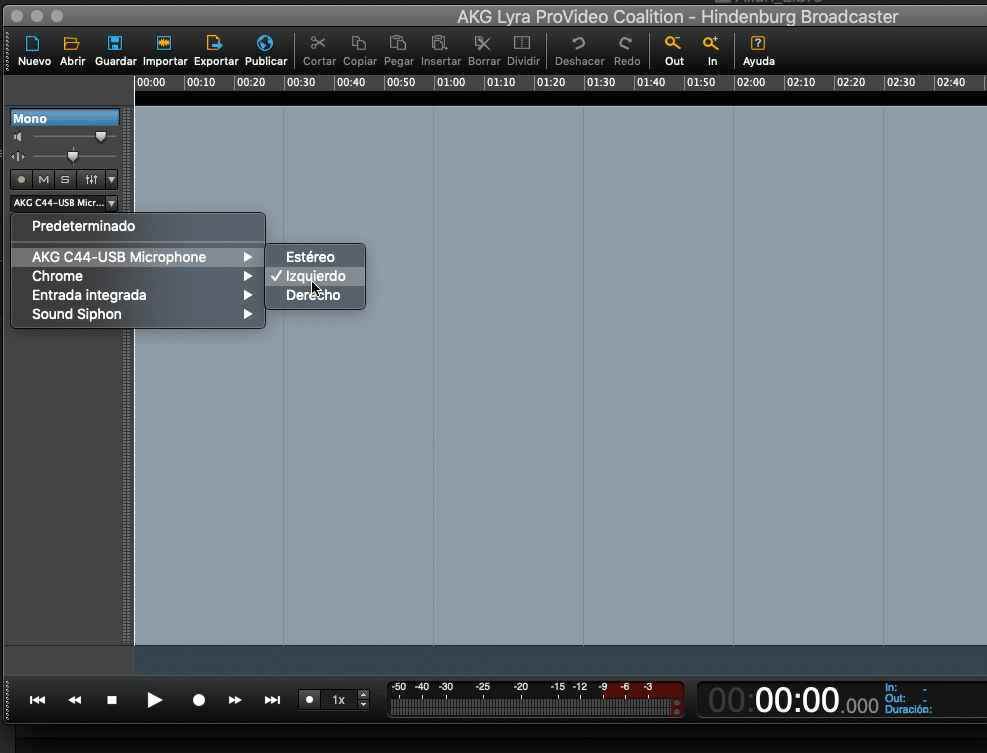 The Castilian word for Left is Izquierdo and the word for Right is Derecho.

There are two potentiometers on the AKG Lyra: in front is the headphone volume. 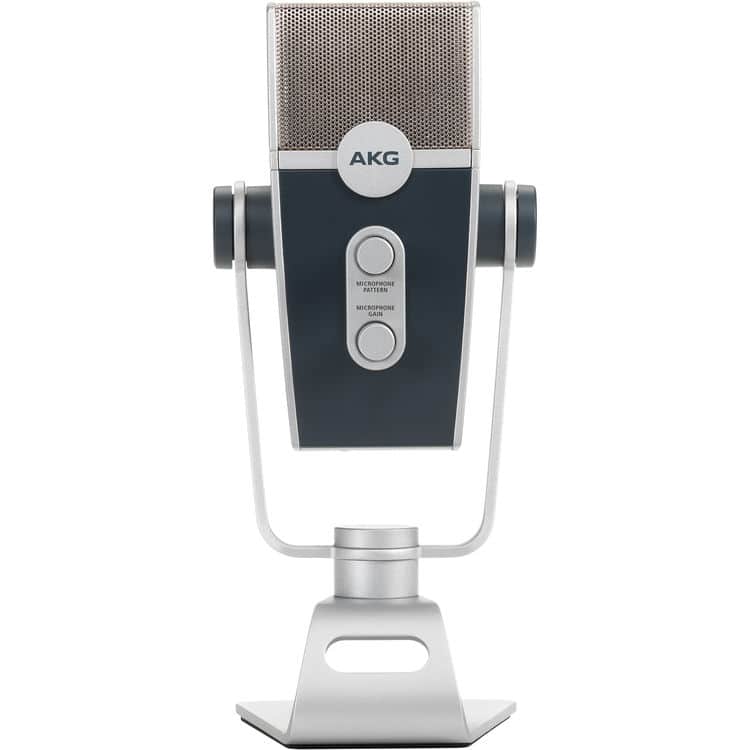 In the rear is the mic preamp gain. Both potentiometers (often nicknamed “pots”) are actually remote controls for their respective inboard amplifier, and both can spin infinitely even when the reach their respective minimum or maximum limit. Thanks to that, we have more detailed control than only 360 degrees would allow. However, the unusual part is that the pots often forget their current settings whenever a mode change is done from the connected device. Bandrew Scott of Podcastage noticed the same thing and mentioned it in his excellent review. Bandrew’s review also covers potential music applications and even includes two types of guitars, while mine concentrates on vocal use only and goes into more detail about integration with different devices.

Bandrew’s observation made specific reference to when changing sampling frequencies. I noticed it when I went between record, stop and then created a new recording in Auphonic on Android (without leaving the app). As a result, it is sometimes necessary to readjust both pots after that happens.

All below recordings are uncompressed 48 kHz WAV. Use Ethernet, wifi or unmetered data. All were recorded in a carpeted hotel room except for the last set.

Above, cardioid, single voice, flat (other than normalization).

Above, tight stereo, aka standard stereo, with mild noise reduction.

Above, two voices (thanks to Memo Sauceda), omnidirectional (“Front and Back”) in an untreated living room, flat.

Above, two voices, omnidirectional (“Front and Back”) in an untreated living room, with CrumplePop EchoRemover (reviewed here).

Above, omnidirectional (“Front and Back”) in an untreated living room, with CrumplePop EchoRemover (reviewed here) and mild noise reduction from Hindenburg Journalist Pro.

Connectivity for mobile devices with Lightning and pre-USB-C

This is due to the AKG Lyra’s 75 mA current consumption, as explained earlier.

Sound quality in “Front & Back” (omnidirectional)

Sound quality in “Wide stereo”, aka front and rear stereo.

(due to their forgetfulness.)