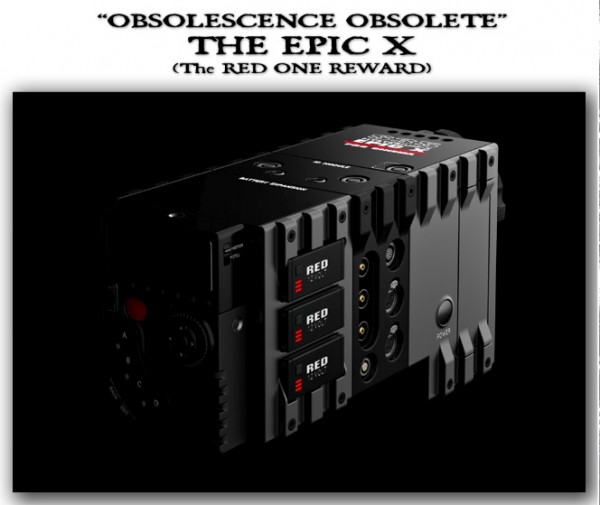 Updated with exclusive charts and analysis Wednesday 1pm PST)
Red always talks about all specs, timetables, prices, etc. are subject to drastic change. So, they’ve already changed (read: “increased”) the specs for the planned Scarlet and Epic cameras, and given a big wet kiss to existing Red One owners. Read on for the details after the jump.

Until I get the energy to more thoroughly summarize, all the info is here.

A lot. We were a bit frustrated with certain system limitations with respect to digital signal processing and REDCODE data rates inside the ‘brains’ so we took steps to more completely control our development process from start to finish, including all aspects of the electronics design and sensor fabrication. Additionally, our RED engineering team came up with a radical new approach to overcoming some of the previous system limitations. Given all these factors, we were able to re-write the system specs, to the benefit of our customers. We felt no compulsion to keep these advances a secret. So here we are.

To me, the most interesting tidbit is how Jim Jannard (founder of Red, for those who’ve been living under piles of DV tapes the last 3 years) wants to take care of the existing customer base -they are offering a special config that basically replicates the functionality of the current Red One’s infrastructure – outputs, batteries, recording – for no additional cost over the Epic S35 Pro camera “brain” module at $28K So if I’m understanding this correctly, a roughly $10K price bump to go from 4K @ 30p max to 125 fps. Insert Keanu “Woah.” It’ll also do 100fps at 5K, 3K up to 160fps, and 2K up to a whopping 250 fps – WAY beyond what standard film cameras can do in terms of frame rates. I think the theory behind this was to offer Red One users a buy-in to the new game* as painlessly as possible given the price point of the new gear – let us (yeah I own a Red One, so this is personally salient) switch from Red One to Epic infrastructure with the same kind of capabilities we had before – CF modules, professional outputs, and battery capabilities (I’m hoping Epic brains will have a SATA interface for my Red Drives). This is called the Epic X S35 Pro Cinema camera, list price $28K. So if you’ve got a $17,500 credit for your Red One, that looks like $10,500 to get this if I’m reading this correctly.

*(so when does the Red One stop being for sale? Presumably after they are catching/caught up with Epic production….there might be a moment of awkwardness, though…or loaner returned Red Ones until they catch up on Epic sales? Pure conjecture on my part.)

OK, that’s for existing Red One users. Of more general interest is the bump in specs – maximum frame rates are up seemingly across the board. We now have pricing on the fixed lens model – $3000 for Brain and lens, $3750 “Complete Kit” – what is in the extra $750? The Redmote? What is required to make this thing go? CF module? Small LCD? Not sure.

I’m working on an upgraded chart to understand what is new different, will append ASAP.

But in short, more good news from Red.

In my dreams they were going to propose what Stu Maschwitz had suggested – a 3K S35 coverage sensor based camera for under $10K that would do up to, say, 72fps. But not to be.

My other conjecture I was hoping to write about but didn’t get the chance – (Warning – total uninformed speculation follows)* I’m wondering if Redcode 250/500 might be the maximum quality possible – for stills. In the same way that there are formats on Red One that can’t be recorded to certain formats (such as Redcode36 4K 16:9 to CF cards at 24p), there might be other limitations of silicon, buses, write speeds, etc, so that you’d have a sliding scale. MAYBE (and again, duly noted, pure conjecture, read-with-fire-tongs-and-safety-goggles) lowest frame rates (stills) are at a very high data rate (little compression), and the higher you go on frame rates, you have to drop down in quality to fit into the processing/power/heat/bus/write speed/other juju limitations of their systems. It can only process/crunch so many pixels/second at a given quality and deliver it to media – so stills/ultra low frame rates could be super high quality. Higher frame rates lesser quality (but still quite good based on what we’ve seen) up to sensor limitations, at which point you start cropping (aka windowing in Red jargon) which reduces lens coverage/field of view but allows the sensor to be clocked up for higher frame rates (more max bitrate limitations in there somewhere as well presumptively). Anyway, my guess. And Scarlet wouldn’t let you push that high is because, as Jim alluded, heat/power become issues – you have to pay for higher frame rates in hardware, and hence higher cost.

OK, back to that chart, will update ASAP. Had so many thoughts on all this of late have a zillion half finished drafts floating around to be finished….

OK, slept on it, went over all the deets, here’s that chart I was talking about:

(if you see any mistakes or know of further info, please let me know!)

Here’s a summary of what’s changed since the November 13th announcements:

-price set at $3000 for the brain and lens, $3750 “Complete Kit” – what makes a complete kit is not defined – Redmote? Small LCD? CF module? Unknown, I’m guessing here.
-shipping date pushed back from spring/summer to fall 2009 (no great surprise, even Jim says they are known for being “fashionably late”)
-rest of the specs are the same, except for more details released – see their link or my handy chart that has all known hard stats in one place
-unknown whether this model will support 2K mode at all – it doesn’t say

-pushed back from Spring/Summer to Summer/Fall 2009 – 3 month push in 2 weeks – don’t keep up that pace Jim! 😉
-no other changes to published specs I could find, just more details

-shipping date changed from Summer/Fall to Summer 2009 – OK, that’s sooner, so that’s better. This is probably their simplest model they’ll make, so first out the door makes sense.
-datarate bumps up 38 MB/sec from Redcode 42 to Redcode 80. NICE.

-is a new model specifically for Red One updating owners
-ONLY for Red One updating owners – new purchasers can’t get
-different from the regular Epix S35 Pro Cinema in the following ways:
–includes CF, battery, and IO modules for FREE
–“unique black and dark titanium case”
–does Redcode 250 not 225 – YES, verified with Ted, this is different and better than the “regular” model – this is Teh Luv from Jim for early adopters
–full $17,500 purchase price of the base Red One gets applied towards this if you wish to upgrade (more on upgrade paths below)
–so IF I AM UNDERSTANDING THIS CORRECTLY – since regular Epic S35 is $28K (and pardon, my prior chart was wrong due to a typo and said $25K), and the CF/IO/battery are free, that sounds a lot like $10,500 upgrade to get a body+parts that replicates the ports & whatnot you had on the Red One body. VERY nice going Jim, we owners sincerely appreciate your deep commitment to walking us forward and not hosing early adopters. Oh, and you get 5K, way higher data rates, bump from 30 to 125 fps at 4K. WOW. WOW WOW WOW. Perhaps one of the most “duh” upgrades in camera history…wasn’t the HD-SDI output module for early F900s nearly that much? All Hail.

-none that I can identify, just more details released

-I’m curious why some are called Cinema and some called DSMC and some are called Pro. Probably all branding to be sorted out, but I wonder if the Cinema lacks some DSMC features or vice versa? Probably not, but unknown.
-names have been changed slightly, more branding work I presume.
-for some reason, ramping isn’t listed for Scarlet S35 & FF35 – dunno if accurate or not, I’ve asked, awaiting response

All of those three has the same general core sensor capabilities – if you look across the product line, they can all do the about the same max frame rates at a given size (unless in a Scarlet, then limited by heat/processing limitations in that smaller body.

Not to bitch, since all this is great, but I still wish they’d make what Stu Maschwitz wanted – a 3K, S35 sized, up to 72fps in a shootable body for under $10K – I think the market would really eat that up. Of course, you get that for $7K in the S35 Scarlet at 5K – but I think for most deliverables, most folks would rather have more dynamic range and/or light sensitivity than more resolution. 5K will make an AWESOMELY sharp 1080p/2K – which is what most deliverables will be – but if Monstro can get 13 stops out of 6 micron pixels (and yes, costlier/more sophisticated sensor), what kind of performance could you get out of …my math fails me, but WAY bigger pixels? 5K is great for stills, but overkill for HD deliverables…I’d think even with Bayer patterns inefficiencies, 3K would be sufficient for a nice 1080p or digital 2K cinema (2048×1080) deliverable. Thoughts? Or would the high costs of low yields on large chips drive the price up too much?

OK, in any case, expect to see a LOT more slo-mo in lower end content in the future….

OK, here’s the deal for Red One owners who want to update:

Jim discusses the update options for Red One ownershere:

So… I own a RED ONE. What are my options?

1. Keep your RED ONE and shoot great images. Get continual free firmware upgrades.

3. Trade your RED ONE in, and receive $17,500 credit, towards the purchase of an EPIC-X S35 Private Reserve package, which is only available to RED ONE customers.

7. Keep your RED ONE and purchase a Scarlet System (one time only) with a 12% discount.

“Use one time only”. Any selection of #3-#7 causes your RED ONE to be marked “Executed” and will no longer qualify for an additional consideration, including discounts, trade-ins or special packages.

Everything changes and improves in this industry. “Obsolescence Obsolete” means giving our customers a path (or paths) to upgrade to new technology so they don’t have to buy a new camera every time a new sensor, feature or capability is introduced. We remain ever committed to this concept.

Score. I’m thinking I’ll do the Epic X S35 or maybe the FF35 Monstro, mostly for the increased lattitude. Hopefully there might be a Luv Package offered on that one too. Almost certainly not just the sensor upgrade, even though that would let me keep all my current accessories.

Speaking of which, hmm….what will get to stay? With a new form factor, I’m betting a lot of accessories will be pointless. Such as:
-my Element Technica HD-SDI breakout – the new IO module has full size connectors on board which is excellent, but this piece is now pointless
-my Red Rails system – no way the bottom bracket is going to be the same
-probably my Element Technica Arri baseplate won’t work either
-handles, universal mounts, that stuff should all be good.
-this makes me pause and think about dates on buying the Element Technica shock/iso mounts for my Red Drives…nah, I’ll need’em anyway
….so forth and so on.