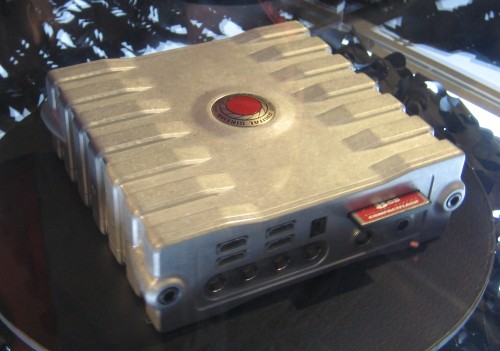 On the show floor, I’ll try to clean this up later, but here’s the scoopage:

Favorite quote from Ted Schilowitz, Leader of the Revolution for Red:

Read on below for all the nifty details:

-has two separate but related functions – can play back Redcode RAW footage (presumably at 2K/3K/4K footage, non-4K sizes not absoutely verified) from camera original footage. OR can play back pre-compressed footage in some RGB codec they haven’t given us details on yet.
-small device, like a smaller DVD player
-can take your 4K material and play it back at 4K, 2K, 1080p, 720p, or SD resolutions.
-4K works with quad link HD-SDI or quad link HDMI for 4K projectors/displays
-2K can be over dual link HD-SDI
-1080p or 720p HD over single or dual link HD-SDI or HDMI
-ports on the back: CF slot, power, FW800, quad HD-SDI, quad HDMI. Intended for being able to feed 4K displays (no news on Red 4K displays or projectors this NAB, drat). I asked about 4 simultaneous HDMI outputs, he said “Interesting idea.”
-works with NORMAL DVD burnable media – as in “buy it AT Fry’s” DVDs according to Ted Schilowitz, Leader of the Revolution for Red.
-this allows for burning 2+ hrs of 4K footage, with 5.1 audio, to a standard DVD-9. They will be using an RGB codec, so you’ll be able to master your show with whatever tools you use, then run it through their unannounced compression software to a file format that goes on a standard DVD-9 burnable, red laser, normal DVD
-is a good distribution methodology for the Red community
-could be a good dailies solution – play back from CF or Red Drive (update – or ANY FireWire drive with Redcode RAW or Red Ray compressed footage)
-audio – 5.1 channels at a minimum
-play back your 2K, 3K, 4K footage from Scarlet or Red One through this (what about Epic footage?)
-play back 2 hours + of 4K w/5.1 audio on a DVD-9 disc
-does NOT play back Redcode from DVD for 2 hours of media – you transcode with a conversion app which is yet to be discussed….nor are conversion times discussed as yet. Maybe some kind of long GOP version of Redcode RAW to bring data rates down to what a DVD-R can play back? You’d have to do something to bring the datarate down. 2 hours on 9GB would be 1.25 MB/sec…4K Redcode RAW can be that much per FRAME. So compressing 20x more than Redcode RAW 4K to fit.

No controls as shown on this device – so obviously an early prototype concept, the form factor will definitely change.

The device does NOT transcode an inserted CF card to the Red Disc format – you do that elsewhere. It WILL, however, play back that CF card from your Red camera. OR a Red Drive, or Redcode footage on a FireWire drive

What of Epic’s 5K footage? Hmm…wait and see. Maybe. But 4K is the stated spec.

Ted Schilowitz, leader of the Revolution for Red: “We consider 1080p Blu-ray to be a stopgap solution. The future is way beyond 1080p.”

There WILL be an RGB codec it can play back, thus you WILL be able to grade, title, etc. master a show and output to Red Ray – isn’t just for Redcode RAW & converted Redcode RAW & RGB.

CAN connect a Red Drive or an FW800 drive via the FW800 port, so if you encode media at a higher bitrate than a DVD can encode, you’re covered, just put it on a FireWire drive

You will be able to master content at 4K, then replicate “normal” DVD media with this formatted media on it – this is HUGE for distributing high def content with low authoring costs – skip the whole Blu-ray thing entirely, yet still have higher resolution footage on the disc. But note – you’ll be able to use ANY DVD replication/stamping house to crank these out at normal DVD production rates.

This will have use on set, for dailies, for distribution to clients, etc. I mentioned I’d LOVE to see an RS-422 deck control port on this to use it as a virtual deck, but that’d be a pricey addition that only a small percentage of users would use…but it’d still be damn handy for production.

But very very interesting gadget, and especially at this price point.

Clear from this and Scarlet, looking at the size of the units, that they have or will miniaturize a Redcode encoding/decoding chipset, and be able to manufacture it at pretty low cost to fit into $3K cameras and $1K playback devices.