Where does the current RED hubbub leave the RED ONE? 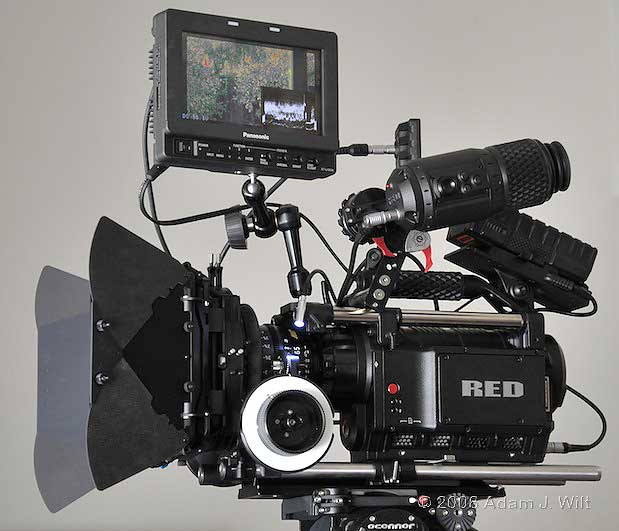 An R1 yesterday. It doesn’t look too worried.

With last Thursday’s epic announcement (pun intended) from RED, the other shoe has fallen.

Four years ago at DV Expo 2004, a couple of folks working on what was then simply called the “Oakley Special Project” took me aside to discuss a top-secret operation, launched in a remote mountain stronghold in southern California. Eccentric millionaire playboy Jim Jannard (it seems like most modern superheroes have that as a lifestyle description), a camera fancier with something like 1,500 cameras in his personal collection, had decided to build the One Camera to Rule Them All… only it wasn’t one camera.

What was described to me was [a bunch of stuff I’m probably still not supposed to talk about], but one thing stood out in the design: it was entirely modular. A central imaging block was just that: the central imager, not too different from the “box cameras” that Sony, Panasonic, and the like sell for remote ops and industrial uses. What was different was the full range of add-on bits ‘n’ bobs. Want an ENG camera? Slap on an ENG-style finder, your choice of recorder, a shoulder pad, an ENG zoom, and go cover news. Want to shoot Hollywood style? Add rods, cine lenses, matte boxes, a follow-focus, a filmstyle viewfinder or an LCD on an arm.

This was very cool, not least because a bunch of us on DV-L had been trading ideas for truly modular cameras. At the time, dockables were widely available (I had, for a while, a DXC-327 camera that could be mated with a BetaSP deck, a Hi8 deck, or a DVCAM deck), but they were still oriented towards the ENG workflow. We crazy visionaries wanted even more protean designs, where the entire design—how you gripped it; how you looked through it; how you controlled it; what lenses, recording media, and accessories you stuck on it—was as flexible and configurable as modern electronic and mechanical engineering allowed.

So when RED ONE came out, I was puzzled. A lot of the original vision was there, and a lot wasn’t; of the missing stuff, the most glaring omission was the modularity. The RED ONE is a big lump, and it’s a cine camera, plain and simple.

With Thursday’s re-unveiling of the re-imagined Scarlet and Epic, RED has gone beyond that original vision: even the sensor cores (which RED calls “brains”) are just another swappable bit. You can build up a system with any of a variety of sensor sizes and capabilities, combined with a selection of grips, lens mounts, power systems, and recording media. You can even morph an Epic or Scarlet into a reasonable simulacrum of a DSLR (“simulacrum”, because they lack a reflex viewing option).

Is it a perfect vision? No, not by a long shot: the elegant computer renderings don’t show any configurations that appeal to my ENG/docco/run’n’gun sensibilities (third parties may come to the rescue there), and while there’s evidence of some reduction in size and weight, there’s no indication that human factors have any stronger representation in the new Epic/Scarlet designs than they do in the R1. I also agree with Stu Maschwitz that a 3K S35 sensor (yielding an honest 2.4K horizontal resolution, enough for 2K or HD with room to push in and reframe), with correspondingly larger photosites and their improved sensitivity and latitude, would be really sweet; in the announced lineup, one would have to get one of the FF35 “Monstro” brains (and window into it to use 2/3″ or 35mm cine glass) to get the speed and dynamic range.

But still: as RED says, “Specifications … are subject to drastic changes. Count on it”. We’ll see.

So where does that leave RED ONE?

Clearly, it’s been the development testbed, the version 1.0 on which the silly mistakes were made, and the lessons were learned (?) to do it right the next time ’round. And it rolled out the gate with only a tiny fraction of its promised features.

Yet RED has made impressive strides in improving the R1, both in firmware updates and in hardware mods. The first 100 cameras were replaced outright with improved versions. Build 17 firmware is current (18 is in beta-test) and each build brings us closer to the promised feature set or at least a reasonable subset thereof; many folks figure that build 16 marked the point where the R1 could be taken seriously as a production camera. Current cameras will be updated (free of charge) with new audio boards that deliver pro-quality audio without needing oddball level-matching cables; lens data connectors; and new CF modules to handle the new high-speed CF cards—and at the same time, a whole laundry list of accessories will be upgraded/replaced by RED to bring ’em up to spec. There will even be an improved sensor in the future, which R1 owners may upgrade to for a fee.

The R1 hasn’t been abandoned, and it will go forward as a workable cine camera. It won’t be as compact or configurable as an Epic/Scarlet system, perhaps, and it won’t be as light (the R1 in the picture tips the scales at a cool 40 pounds), but these aren’t big issues for cine-style work (at least on sticks; handheld and Steadicam are different stories. Yet a built-up R1 isn’t much different from a built-up 35mm cine camera, F35, or D21 in this regard; that 40 pound kit is built around an R1 body weighing a mere 10 pounds).

But that’s all in the future. R1s are here now (well, they’re here now if you put in a reservation a year ago, grin), and they’re capable of making pretty decent images. If you’ve been reading Art’s stuff you’ve seen some of ’em.

Right now, a RED ONE in the hand is worth two Epics/Scarlets rendered in a remote mountain stronghold.

What if, when the Epic finally comes out (and matures to the point the R1 is at now, at least), it turns out to be worth the upgrade? RED says that R1s may be traded in at full purchase price for an Epic. You simply swap in your existing R1, with which you’ve been making pictures all this time, for an Epic.

That’s either ultimate upgradability, or ultimate modularity, you decide which.