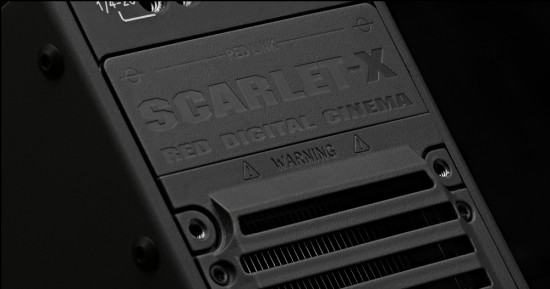 Jim Jannard of Red (finally) revealed their next camera – 3K for $3K is long gone – now it is 5K stills & 4K motion for a sub-$10K “brain.” It is everything you wanted in an Epic…but less.

Pretty much as expected, Scarlet is Epic’s little sister. That kicks ass.

Ships with the Brain, SSD, and an aluminum Canon EOS lens mount is $9750 until December 31st, then $9700 gets you the brain only thereafter.

Scarlet max datarate of 55 MB/sec (440mbits) – max res/framerate combos break down like this:

(keep in mind the lower resolutions are cropped/windowed, so you use less of the sensor, less of the glass, makes your effective focal length longer. And 1K Bayer pattern is god for a clean/sharp standard def, but NOT HD)

It DOES have HDRx, but you can’t use it for 24p unless you drop to 3K resolution or less (at half the max framerate of that resolution)

No discounts for Red One owners (you got a deal on the Epic) – this is a change from the discount Red had previously discussed. If you skipped the Epic, and waited to get a Scarlet, you are SOL – Red pulled the rug out from under you.

Same dynamic range as Epic, so a tad better than a Red One Mysterium-X.

Same software to decode as for Epic (Redcine-X Pro)

Side handles, EVF and Redmote will be backordered for months.

Alright, those are the facts. So basically we have a clocked down Epic. Same weight, presumably same size, same accessories as Epic. And pretty damned decent specs. In resolution, it exceeds the original Red One – which can only record 4.5K widescreen at best (at less than 16:9 image height too). But the Red One can shoot 2K 2:1 at 120fps….which Scarlet-X can’t. Since I’m selling my Red One and set of lenses (anybody want? Email me at mdclist at me dawt com if interested!), this feature comparison is germane to me.

In any case, I’d say this pretty much blows the Canon EOS C300 out of the water. You can use Canon lenses on either Red Scarlet-X or Canon EOS C300, but only the Red offers auto focus and programmable focus pulls. That said…lets count up what it takes to match a Canon EOS C300 in a shootable configuration:

camera body
side handle
battery
lens mount
onboard media slot
-EVF (not as good, but hey, they have one)
-USB 3.0 CF card reader (Lexar’s, $40)
-battery charger
-AC power adaptor
-one 8GB card (records a bit over 20 minutes of 1080p24 at best quality)

So all in all, you can technically start shooting, with means to recharge and download, for $75 more than the base camera (before lens, of course! But that is the same for either camera, so I’m removing that common denominator, as it were).

…so the difference isn’t nearly the 2X as first hinted at. As usual, Red’s pricing is entirely a la carte – so for professionals, it is nice that you can accessorize exactly how you want. For those coming from the DSLR world, it smacks of Porsche pricing – “Oh, you want WHEELS with that car? Them’s extra!”

So your under $10,000 camera is really about $14,000 now….and goes up to $16,795 starting January 1st. Red accessories also cost more than their Canon counterparts it would appear as well.

update Saturday – actually, the Canon has a less capable EVF as well as LCD – so for feature parity you’d still need to add in $3200 for the (really nice) Red EVF. But they’ve been backordered for months, so don’t know when you’d get one…

But specifications wise, the Red Scarlet-X SMOKES the Canon – better codec, HDRx/dynamic range, higher frame rates (although windowed/cropped), higher resolution (this 4K sensor is actually 4K, and you can record it), 5K stills instead of 2K, at least 12 bit recording not 8, on and on and on.

However, this is a Red product – meaning not all features will work out of the gate (they HOPE to have on camera playback before the first units ship), it’ll take months to get the bugs squashed, and parts will be backordered for annoyingly long unknown amounts of time (Red states parts will be in “reasonable” quantities by February….not holding my breath for that one, since they have never met a shipping deadline or matched a “ship by” date that I can recall). In contrast, Canon will likely ship in pretty decent volume from the get-go, and it’ll be feature complete with a few bugs to squash that might pop up – just compare the history of Red and Canon ship dates, problems, and time-to-fix and you’ll get the idea.

All in all, this camera looks to be an amazing deal for the customers…once it ships, in volume, with all the parts, and all features enabled. The good news is it shares a core architecture with Epic, which has been shipping in limited circumstances since early spring of this year, so they’ve had all that time to be working on various issues. Scarlet may have some bugs Epic doesn’t, but it isn’t terribly likely since they share so much. The Epic costs so much more because they are going for top end performance. Scarlet-X costs less because they didn’t need to hit those top end performance numbers, so the parts are cheaper to do less.

At this price, rigging up a shootable config will be sub $20K with EOS lenses. Amazing time to be an indie shooter!

As always, putting together a truly professional kit for this kind of work entails more than the average HDSLR shooter has thought of.

“Hooray! I can afford the camera!”

…quickly leads into discussions of can you afford:

-the rest of the accessories to actually make it shootable
-yet more batteries, media, and chargers to support shooting all day
-the download station to handle that media offloading needs if you can’t afford enough media (and trust me, if you’re buying this camera, you can’t)
-more gear to make it practical to shoot on sticks
-yet more gear to make it viably hand holdable
-lenses! Oh yeah! At least Canon glass is relatively cheap (but has issues, more next on that) PL glass dwarfs it. I’ve spent $30+K on Red’s decent not awesome lenses myself (which I’m selling for $22K – anybody want? Email me at mdclist at mac dot com)
-then there’s serious sticks and fluid head ($8-$30K), matte box, follow focus, filters, etc etc etc….THEN you’d have something you could go shoot a serious commercial with. The fact that the camera body is lighter and cheaper is great – you can save some on your body, sticks, and head, and with Canon lenses, the glass. But the rest of the accessories are still painfully, professionally expensive.

But this is yet another step in the democratization of filmmaking – the price keeps dropping, the tech specs keep advancing. That you can shoot 4K (which makes an EXCELLENT 1080p downconvert) with HDRx. Red One launched at $17,500, grew up to be Epic at $28,000, and now this one at about 1/3 the price of the Epic.

Once Red gets it sorted out and working properly and consistently shipping (early/spring 2012?), it’ll be fierce competition for the Canon EOS C300 and Sony F3 cameras – the specs can’t be touched by anyone, anywhere near the price point.

If, as Red says, this is just Epic with less horsepower, which in turn is a smaller Red One MX with more horsepower, this bodes well indeed.

Scarlet-X is a mixed bag in comparison to a Red One MX – it is smaller, lighter, higher resolution, more options, HDRx, DSMC, but doesn’t match the frame rate & high speed resolution options of the Red One MX. If I needed light and fast or HDRx, Epic/Scarlet would win. If I HAD to have 120fps+ at 2K+, Red One MX or Epic would be the way to go.

I’ve been trying to find a friend’s article on the difference between stills (EOS style) and cinema (PL) glass, and when I find it I’ll link to it. On the one hand, autofocusing and programmable focus pulls sound great, and that helps, because There Are Issues when shooting with DSLR glass.

Some of the issues:
-at least Canon glass focuses in the same direction as PL glass- Nikon’s “wraps” the opposite direction to focus closer (or further)
-but the gearing – still lenses are geared to run through a lot of range in a short throw of rotation – a few degrees of rotation moves the focus point in/out far quickly – cinema glass has a longer wrap/throw, so you can fine focus
-cine lenses are designed to have fine control, tight with no slack – crucial when NOT relying on autofocus to “snap to” in an instant – it doesn’t look good to hunt for focus in the middle of footage, and cine glass, but not most stills glass, has NO slack when hunting for focus
-cine lenses have infinitely fine tune-able exposure – most stills glass clicks from stop to stop
-cine glass focus & zoom movement happens internally – the lens doesn’t get longer/shorter as you zoom/focus
-consistent location of focus/iris grip/gearing – so can use a follow focus
-gearing, period! To accommodate follow focus or FIZ (focus/iris/zoom) motors
-focus breathing – tolerable in stills glass, A Real Problem And Issue for cinematography

OK, enough on that. So Canon glass – cheap and plentiful and you may already have – yay! But not the quick fix for Making Masterful Movies (without some workarounds and compromises).

Scarlet-X – looks really good, if they deliver on these specs the best camera performance for the money on the market – nobody close.