How a Mac OS kernel panic almost stopped us at NAB – and how it was fixed. 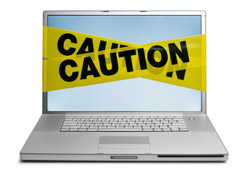 (Note: Names have been concealed to protect the helpful from becoming inundated with support calls.)

This past Saturday, while setting up for our first presentation at Post|Production World at NAB, we were having trouble getting our MacBook Pro to recognize the projector. We put it asleep and woke it back up again, and got a kernel panic: that nasty darkened screen with the “must reboot” message. From that point on, no Adobe CS3 application would run on our computer – including the installer/uninstaller, which meant we couldn’t replace the apps we needed in order to do our demos. Oddly enough, Apple’s Safari wouldn’t run either. Repairing permissions, safe reboots, and creating new users didn’t help. Fortunately, we were able to copy our files off to another computer (with special thanks to Jeff Foster of Lynda.com for the timely loan of a very large memory dongle) so that the show could go on. But if you’ve had a similar catastrophic crash involving a Mac and Adobe CS3 applications, you might want to read on to see how at least this particular problem was resolved.

When we got back home, we initiated an Adobe Acrobat Connect – aka “Breeze” – session, and let several Adobe employees take turns at remotely controlling our computer (some from home, after hours), trying to find the problem. The worst fear was that track 0 on our hard drive – where the Adobe installers place some vital information – was damaged, which might have required a complete reformatting as well as loss of legal installs. Instead, what was found was that a set of OS X components were missing or damaged, crippling both the Adobe CS3 apps (which use the internet to check for updates and the such) as well as some Apple apps (such as the aforementioned Safari, as well as Software Update and apparently some Apple installers).

In the end, we had to replace two folders in System > Library > Frameworks: WebKit.framework and JavaScriptCore.framework. Both were missing components, and the file JavaScriptCore had a “modified” date that matched the date and time of the fatal crash. As the system was still using what was left of these two core components, we couldn’t overwrite them with fresh copies from another computer while the laptop was running. The solution was to go into System Preferences > Startup Disk and reboot the laptop in Target Disk Mode. We then connected it to another Mac with a FireWire cable and was able to copy the required files across without system intervention.

All Adobe CS3 apps – as well as Apple Safari – now run fine on the laptop, with no reformatting or reinstallation required. However, it still won’t run Software Update. We’re taking this as a sign to finally break down and buy OS 10.5 (on disc) and install it, which should do a wholesale replacement of many system components.

There has been a lot of well-deserved grumbling about Adobe’s CS3 installer and registration system, and it would be easy to see this as another case study of its shortcomings. In reality, the main problem was the OS crash (and the balky projectors at NAB, which caused more than one presenter nightmares), although the Adobe individuals involved told me that the exercise did reveal some useful information about their reg system as well.

What also came out of this was a better understanding of just how aware Adobe is of the issues with the CS3 installer, and the fire inside the company to improve it in the next go-round. Although it is easy to demonize a large faceless corporation, you eventually learn that it consists of a bunch of individual human beings, many of which are actually trying to do the right thing (legal department occasionally excepted – the Photoshop Express Terms of Use miscue being a case in point). For example, after I thanked a manager who worked from home to help clear up my problems, I got a reply saying “All of us here are really in it because we want to make our users happy.” It would be easy to dismiss that as just a slogan if I hadn’t experienced it first hand. Our lives as users would be easier if all employees had that attitude.