We’ve previously covered how content creators can get started with streaming, and it’s amazing to see how the technology allows creators to deliver their content. Whether you’re looking to stream a high school football game or broadcast simultaneously from time zones across the world, streaming is a powerful way to pull in and engage an audience.

Being able to create that audience engagement during events like NAB and IBC is incredibly powerful, and that’s something Michael Gailing knows well. As the director of marketing at Teradek, he’s produced their live coverage at NAB for the last several years, and these broadcasts have showcased an incredible array of talent and information to a live audience from around the world.

We talked to him about how he’s able to attract and pull in an audience for these events, what streaming means as their point of distribution and what they have in store for their upcoming coverage at IBC.

How long have you been providing live coverage of your NAB and IBC presence?

We’ve been broadcasting live from the NAB show floor since 2011, but we didn’t turn it into a polished production until the following year when we partnered with Livestream. We started broadcasting from IBC in 2013.

What advantages do you experience with live-streaming as your point of distribution?

Our NAB and IBC broadcasts allow everybody that is unable to attend these conventions to stay informed on all of the latest product announcements and happenings. All of our broadcasted content is immediately uploaded on Vimeo for on demand viewing so even if you couldn’t catch the live show, you can still access all of our interviews, panel discussions, and other segments.

Do you think audiences are actively looking for this type of content?

Of course! Most industry media outlets provide comprehensive NAB and IBC coverage, but its typically written content with only a handful of photos. Our live shows offer engaging, unscripted conversations with company representatives and industry influencers, which provides our viewers with a real raw sense of what is happening at the show. Most of those invited onto our stage also bring their latest products so we get a lot of great footage of the gear being shown off and discussed at length. 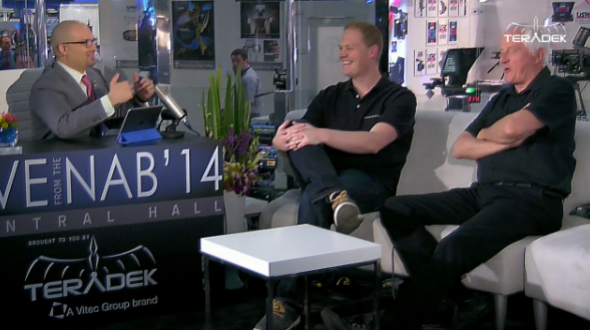 What sort of feedback have you gotten from viewers about your NAB 2014 coverage?

The feedback has been overwhelmingly positive. You know, everyone has an opinion about what we should cover, how we should cover it, and so on. But despite the constructive feedback, I think most people appreciate the content we provide for the broader industry. Its very important for us to remain neutral and to keep this show as a community service so we strive to stay out of the spotlight and cover only what we think our viewers will find most pertinent.

A recent case study showcased how you were able to use LiveAd to increase your viewership during NAB 2014. As the event went on, how did you see your audience grow and become more engaged?

We have a core audience that religiously watches our live shows every year, but for NAB 2014 we wanted to open up the content to an audience much broader than our original targeted groups. The goal was to see what content resonated with people outside of our immediate industry and secondly how effective it was at informing those very people about products they may not have known existed.

Once LiveAd went live, our viewership went through the roof to the tune of roughly 600% over our earlier numbers. And these weren’t just viewers who stopped by for 20 seconds and then bounced. We had a peak concurrent viewership of 7,528 that was sustained for long periods of time throughout the duration of our LiveAd experiment. We were amazed at the numbers and extremely excited about how well our online audience took to much of the content we were broadcasting.

You pulled in well over half a million total views during NAB 2014. Was this due to the content, the fact that you were live-streaming, a focus on increasing your visibility, or a combination of all those items?

I think it was a combination of all of those things. Live streaming allows anybody with an Internet connection to check out what we are doing so the accessibility of our content certainly played a big part. Broadening our target audience also helped bring in much larger numbers than before, but of course that was our goal from the get go with LiveAd.

And lastly, I think our content played a big factor in this as well. NAB and IBC are traditionally professional broadcast shows, but fairly recently companies like GoPro, DJI, and other more consumer-oriented organizations have jumped into the fold. We make an effort to highlight content that focuses on the products and people that the average online viewer may better identify with such as quadcopters, cameras, and popular online tech podcasts like GeekBeat.tv. Interesting content draws viewership so I think our approach at NAB and IBC certainly lends itself to generating a large online audience. 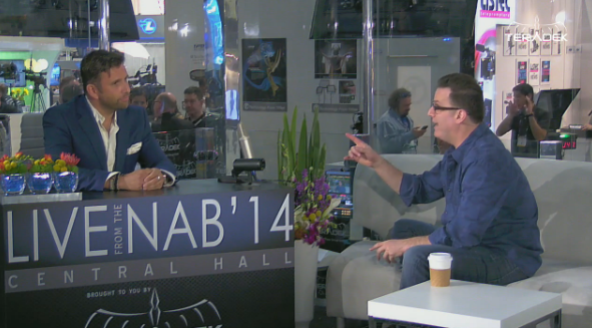 Which segment resonated the most with your audience?

Our most popular segments were the three CRITICS shows hosted by Philip Bloom and Steve Weiss, two film/video veterans that come together as dueling co-hosts to candidly critique web based video content. Both of them are well known in pro video and cinema circles, but they have this great energy between them that gives us really engaging and fun material. Not only do they have great commentary, but the clips they roll prior to their critiques are always intriguing and well chosen.

We also saw a lot of interest in some of our NewsShooter panels like the “To 4K, or not to 4K” segment, which brought together Philip Bloom, Vincent Laforet and Garrett Brown (inventor of the Steadicam) for a discussion on the transition to 4K cameras and content. Other panels like the one on drones and stabilizer systems like the FreeFly MoVI also proved to be very popular.

We invite many different partners to join our live show so that we can offer a variety of unique perspectives on the hot topics of the day. Some of our partners include : Ustream, planet5D, Church Production Magazine, Broadcast Beat, Atomos, and FreeFly Systems.

Audiences interact with content in a different way when it’s being live-streamed, but how important is that difference for people on both sides of the content?

We do our best to provide an experience that is universally engaging for our online audience, but that’s easier said than done. The primary goal with this content is to inform and I think the way we structure our interviews and panels definitely accomplishes that. What we’re working on now is how to make this a more social experience, rather than a one-sided, “Here is your content, enjoy.” We interact with our viewers over Twitter, on Facebook, and via Ustream’s Social Stream throughout our broadcast. And after each our of live segments is recorded and uploaded to our Vimeo channel, we continue to interact with those that comment on the footage. However, I think we can create a larger discussion here and so one of our goals in the future is to create a forum where we can get our viewership to discuss the content amongst themselves instead of with just us.

At the end of the day, we aim to please and we take very seriously the comments and critiques passed along to us at the end of each show. After all, if the viewer isn’t happy, they aren’t watching and that means we’re not doing a good job. There is always room to improve, but I think we’re doing a pretty good job so far.

What advice would you give to anyone who is trying to figure out if live-streaming is the right way for them to approach distribution?

I think there is a misconception that the quality of an online broadcast need not be of the highest caliber since its not on TV. This couldn’t be farther from the truth. Viewers want engaging, good looking content that doesn’t drone on or speak over their heads. It’s just as easy to close your browser window as it is to change the channel on TV. If you’re looking to get into live streaming, these are the primary questions I would ask:

Different types of content require different questions to ask, but one thing is always true: live streaming is a fantastic way to reach a massive audience that you might otherwise never reach in person or via other methods like TV and radio.

Anything you can share about what you have in store for IBC 2014?

All I can say is that you can expect another exciting show covering the latest and greatest that IBC has to offer. Philip Bloom’s and Steve Weiss’ CRITICS is coming back for another round of 3 segments so don’t miss it!