Stuff we learned during testing and Art’s spec spot shoot 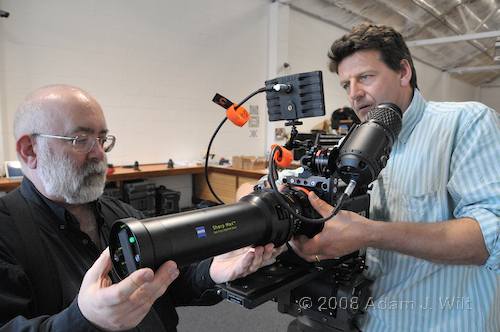 The more we work with RED ONEs, the more we learn about what they do and how to work with them, thus the following grab-bag of observations and experiences.

When we arrived at Chater Camera for our testing a couple of weeks ago, John Chater was busily tweaking the flange focal depth on one of his RED ONEs. John has a Zeiss SharpMax ™ Back Focus Alignment Device, basically a self-centering tube containing optics that present the image of a Siemens Star focusing target at infinity distance. John had found that the flange focal depth was wrong on this camera; whether it shipped that way from the factory or whether a renter had “tweaked” it was unclear (probably the latter).

During my tests, I found that the 12x Optimo focused on the chart at a very different distance (as reported by the witness marks on the focusing scale) depending on whether I was zoomed in all the way to 290mm, or out to my shooting setting of 40mm or 24mm: it was accurate at full tele, but as we zoomed wider, the visual focal point and the lens scale disagreed more and more. More tweaking followed…

As I mentioned above and in my test report, neither the RED LCD nor the 720p monitoring output showed fine enough detail to focus critically, even with image magnification engaged. Shooting with RED monitoring is like shooting with most under-$10,000 HD camcorders, using coarse LCDs and EVFs that only hint at what you’re actually shooting. Unfortunately, the 35mm-sized Mysterium sensor offers much shallower depth of field than a 1/3″ or 1/2″ handycam, so critical focus is much more, um, critical.

In our tests and on Art’s spec spot, our subjects were stationary, or far enough away that minor distance changes weren’t an issue. There was plenty of time to rack focus back and forth, using both the LCD and the 720p output displayed on a 17″ monitor, and most of the time that worked fine.

But I’d hate to have to focus the RED by eye on a dynamic, moving target. There just isn’t enough detail in the low-res outputs to be sure of focus.

Focusing by tape measure and the lens witness marks is how the Hollywood folks usually do it, and that seems to be the rule for RED ONE, too. Just be sure that you’ve set the flange focal depth properly before you try this, or you may be disappointed, especially with wider lenses or wider zoom settings.

Robert Harrison reported using the Accuscene viewfinder’s false-color “exposure meter” setting as a focusing aid: the posterized false-color image made it much easier for him to snap things into focus. Since RED acquired Accuscene, that false-color mode is now part of RED’s monitoring; I’ll try using it as a focusing aid the next time I have a chance to work with the camera. Try it for yourself, too, and see if you find it helpful.

Some folks also say that the RED EVF is a much better focusing finder than the LCD. I’ll be keen to test it out at some point.

Finally, we can always hope that a future build of RED ONE firmware will include a higher degree of magnification in its image-enlargements mode, for when critical focusing is required.

The menus continue to trip us up: they only display a few options at a time (and only one at a time on the rear panel), so navigation requires a lot more memorization than on cameras that show more menu options at any one time.

Fortunately I internalized the sequence to get to shutter speeds as a result of doing my tests; that came in quite handy when we needed to tweak speeds during Art’s shoot. But just about every other menu operation we needed to do required a halt in production while we poked through the three different top-level menu trees, trying to suss out where something was.

Obviously any owner/operator will have the menu system committed to memory after a time. But for the rental user, menu navigation is painful. Manuel Wenger in Munich has made up a PDF of the menu system that we found quite helpful, although it only covers build 13 of the firmware (build 15 is current as I write this).

(An aside: I went onto reduser.net to look up the URL for the menu PDF’s, but got sidetracked by this thread which illustrates, as well as anything I can say, why so many of us find an unmoderated-for-quality/maturity/civility forum a poor resource for camera support. I did, however, eventually find Manuel’s site—using Google.)

Scuttlebutt has it that the menu system will change for the better in build 16.

Rather than just drag ‘n’ drop clip folders from RED media to FireWire drives, I tried using R3DManager, which allows multiple-destination copies and data verification using checksums. It’s worth checking out if you’re a Mac-based RED Wranger; it automates data movement and provides an audit trail for RED clips much like ShotPut EXpress [Flash required] does for EX1 clips or P2Log [Flash required] does for P2 clips.

On Art’s shoot, while we broke for dinner, I dumped the first magazine using R3DManager. It worked as advertised. There’s a bit of delay while checksums are calculated; then the clips are transferred. Then there’s another delay while the checksums are calculated on the copied clips and compared to the source checksums. At the end of the process, I was told that the copies appeared to be fine, and I could send the RED DRIVE back to the camera for formating and re-use. I opened the clips in REDCINE, and visually verified that I could scrub through all of them, and they indeed appeared to be OK.

However, we only had the one RED DRIVE; every time we wanted to “unload the mag” the camera department came to a halt. That was fine during dinner, but a bit of an imposition during shooting hours. Much as I wanted to use R3DManager, I couldn’t afford to keep people waiting; between the checksumming and the slow transfer rate (limited by the FW400 backup drives we were using), this process was too slow. I wound up dragging ‘n’ dropping clips from the RED mag to a local store (my MacBook Pro’s internal drive, to avoid FireWire slowdowns); loading the clips in REDCINE to verify them, and then releasing the mag back to production. I then manually backed up the clips from my internal drive to a FireWire drive; handed the drive to Tim so he could replicate them on his MacBook Pro, and started another backup. Eventually we wound up with at least four copies of all the clips: two FW400 drives, a G-RAID FW800 drive, Tim’s laptop, and (for some of the clips) my laptop. No clips were lost or corrupted as far as I know.

Obviously this process wasn’t optimal, but it worked: we had a reasonably small amount of data to back up, and time was of the essence getting the single RED DRIVE back to the camera dept.

On a more “serious” production—such as one with two RED DRIVEs, grin— R3DManager would have cut down the number of manual steps considerably; on a long and arduous shoot that level of automation reduces operator workload and eliminates several opportunities for stupid mistakes.

And if I’d had a faster storage pathway, such as an eSATA RAID, or an ExpressCard34 FireWire card feeding a FW800 drive , FireWire400 wouldn’t have bottlenecked the transfer rates, and transfers would have been much swifter. The RED DRIVE (as well as most of the speedy CF card readers) uses FW800 as its fastest offload connection, so you want to make sure your backup strategy doesn’t slow things down any more than necessary: hanging FW400 drives off the bus slows the entire built-in FireWire bus to FW400 speeds.

<rant>
OK, this is a trivial thing, but look at these screenshots from the process of reformatting RED media on the camera:

Three misspellings of “magazine” out of six instances? One can only hope the person writing the UI messages isn’t the same person responsible for writing the actual data-storage code!

Seriously, this isn’t the end of the world, but it does bring to mind the concerns several people expressed to me at NAB, when Scarlet and Epic were announced: “gee, they haven’t finished their first science project yet; should they be starting new ones?” And it certainly won’t put a nervous director or producer’s mind at ease should he or she see this; it has to make you wonder what sort of code reviews or other quality-control measures are being followed in the firmware-creation process.

I don’t want to dump on RED just because of a little illiteracy. Much bigger companies do even sillier things.

On April 11th, I purchased a MacBook Air (yeah, Mike Curtis told me not to, but it’s a great field machine for writing, Aperture image processing, and web work like PVC updates. I’d say more about this bloody gorgeous machine, but I’d be accused of being a fanboi [and yes, I lust after the Lenovo Thinkpad X300, too; I’m a cross-platform gearfreak]).

On May 5th, I received a worrisome email from Apple:

Support for your MacBook Air is about to expire.

Now, I did check, and yes, I have 90 days of telephone tech support, according to all the Apple documentation. But I also checked, and as far as I can tell, this email came 24 days after I bought the flippin’ thing; how does the passage of 24 days get me close to the expiration of my 90 days of tech support?

ART OF THE CUT with Michelle Tesoro, ACE on editing “The Queen’s Gambit”

The New Sony FX3, A First Look At The Cinema Camera

V90 memory cards: your choice for 4K video and beyond 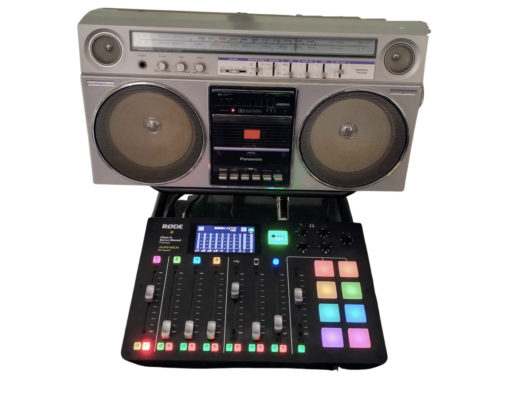 In past articles, I have covered the advantages of balanced audio connections. I have even covered the differences between...