Not a full test, but a first look at a beta build. 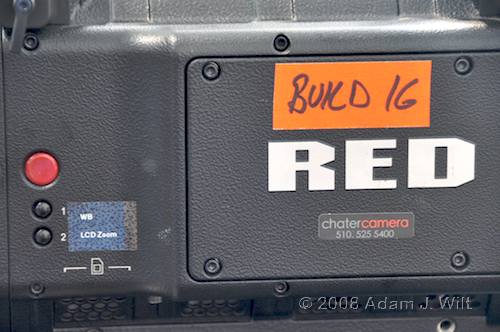 Last week, Dane Brehm gave a bunch of us a tour of RED’s build 16 features (as Art Adams reports here). While three beta releases of build 16 had come out in the preceding week, the sacrificial test camera at Chater was “only” up to the second beta build. With builds coming fast and furious, it’s clear that this build isn’t considered ready for prime time just yet. Still, even with the protean nature of build 16 so far, we saw some interesting things. 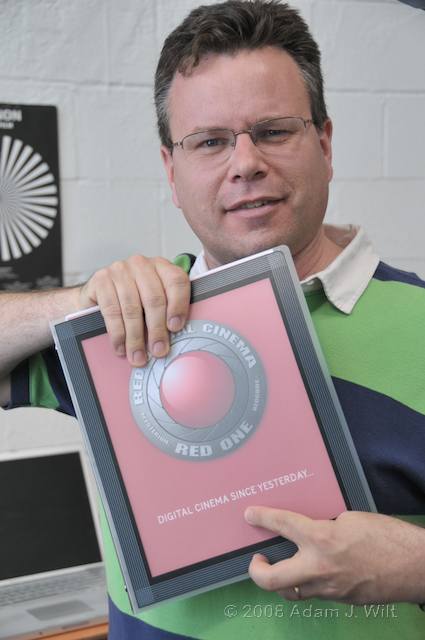 • Dane showed a blue-channel extraction of a shadowed scene, shot with both build 15 and build 16. The noise in the build 16 still frame appeared to be lower.

• The camera now offers 1080p playback. We weren’t able to get it fully working on the Blackmagic Designs HDLink / Apple Cinema Display combo at Chater (weird color errors), but we were able to verify its 1080p-ness.

• A grayscale can be displayed outside the active area, on the right side of the monitoring outputs. It’s useful for calibrating your display brightness and contrast (see it in the pix below, though in these pix, the monitor is crushing blacks, all the better to see highlight separation). 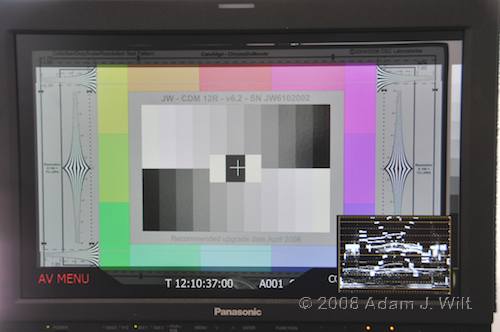 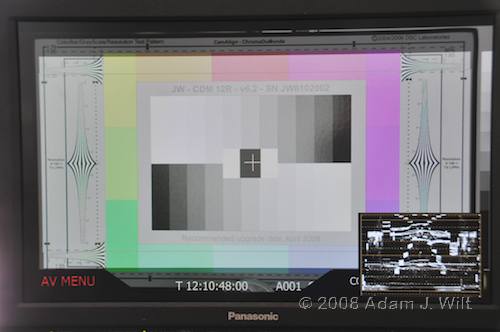 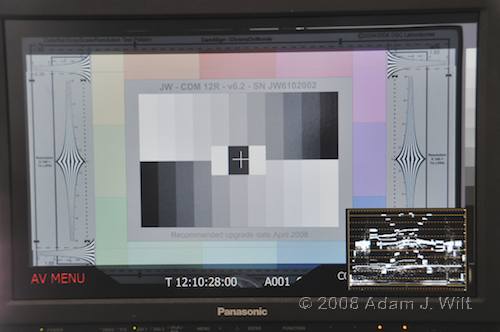 (All these images were made using the 720p output fed to a Panasonic BT-LH1700W monitor with internal WFM, using constant exposure settings at ISO 320, set to just clip the white patches in Rec709. Only the output LUT was changed on the camera.)

REDspace appears to be a brighter version of Rec709 with highlight compression applied (or, perhaps, Rec709 with a much lower gamma value). Like Rec709, it changes as you change the camera’s ISO setting. Both REDspace and Rec709 outputs clip at the same point; REDspace doesn’t give you any more highlight detail, but pushes the midtones up by about 10 units to give you a brighter image,

The really interesting LUT is RAW: it is not affected by the camera’s ISO setting, but appears to show you everything you’re getting out of the sensor (as a result, the image is fairly flat and desaturated). In my quick tests, there appears to be somewhere around a stop between where Rec709 monitoring at ISO 320 hits clipping, and where RAW monitoring hits clipping; this matches what folks say the actual recording headroom is. I’ll want to get in and look at monitoring outputs vs RAW data in more detail, but so far it looks like RAW monitoring gives you WYSIWYG control—a huge advance.

Note that RAW monitoring still applies a gamma of around 0.45 to the output; it’s not a linear output tracking the RAW recording, but a gamma-corrected output appropriate for display on a monitor (note that the grayscale steps on the RAW mode’s WFM display run in a straight line; the grayscale in the DSC ChromaDuMonde chart, like most video grayscales, are designed to yield a straight line when fed a 0.45-gamma camera signal).

Also remember that regardless of output LUT setting, the camera is always recording linear RAW data.

• This is a beta release, and not a final build: problems still occur: 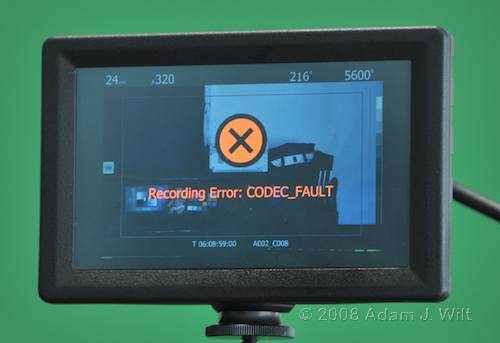 We were able to get this error fairly easily.

Apparently the codec in the second beta build wasn’t too happy with panning-and-tilting shots of our test setup. For all I know, this particular problem was fixed in the third beta release, but we shot with what we had.