A low-res look at a high-res camera. 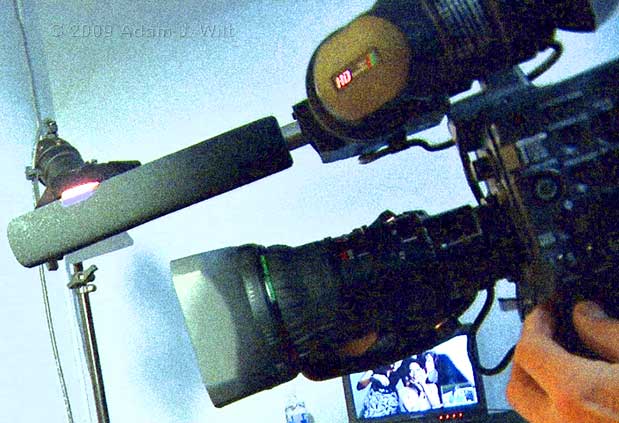 I recently had a brief hands-on session with the Panasonic AG-HPX300, courtesy of VMI Video‘s “Big Deal Day” demo with Panasonic’s Jan Livingston. While I wasn’t able to run formal tests, I did have enough time with it for some initial impressions.

The Panasonic AG-HPX300 (US$8000 street price) is a 1/3″, 3-chip camcorder using full-res MOS sensors, and offering AVC-Intra recording on P2 cards as well as DV, DVCPRO, DVCPRO50 and DVCPROHD. It’s a descendant of the HVX200, HPX500, and HPX170, and it shares the “anycam” flexibility those cameras are noted for:

Note: not all frame sizes / frame rates supported in all codecs.

The HPX300 is a compact, shoulder-mount camcorder than comes with a 17x Fujinon lens as standard equipment. It takes two P2 cards, slotted into the operator’s side of the camera, right where they belong for easy access and for security. The 300 has a full complement of connectors, including HD-SDI out, genlock, timecode in/out, composite video out, and three XLR inputs plus a slot for a “UniSlot” wireless mike receiver.

The 300 is the first low-cost HD camcorder from Panasonic with full-res, make-no-excuses, take-no-prisoners sensors. Look at this 1:1 composite of a DSC MB-SW chart I shot wide open, hand-held: 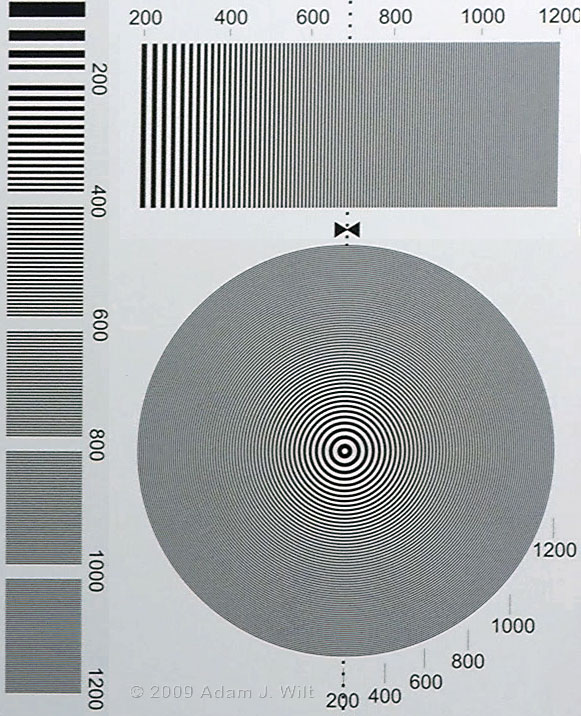 Granted, there was too much edge enhancement (mostly vertically) in the camera’s scene file that I didn’t bother to tweak out, but there’s clearly resolution out to the limits of 1920×1080 recording (1000+ TVl/ph), with admirably little aliasing; Panasonic has done a superb job. I’d happily intercut this camera with an HPX3700, an F23, or the like with no fear of any raw resolution mismatch; the 300 is sharp enough to hang with the big dawgs.

Yes, it’s a MOS sensor with rolling shutter. My gut impression was that jellocam was about the same as on other high-end (C)MOS camcorders like the EX1 or EX3, but I’d want to test it in a controlled manner before I’d characterize it any more definitely.

Ultimate sharpness is of little use if the camera won’t let you focus properly, and here also the HPX300 delivers. The 300 comes with a 0.45 inch LCOS EVF with (it is said) 852 RGB triads per scanline and 480 scanlines. It uses a sequential RGB refresh, so edges may show shimmering colors (just like the RED’s EVF), but it’s crisp and focus-worthy. It offers both an expanded focus mode for magnifying the center of the image, and a “focus bar” that grows longer as the focus is improved. But even more exciting is a proper peaking control, accessible through the menus: you can select any of 15 different peaking levels, and choose a high or low peaking-emphasis frequency. I found the peaking to be as usable and as satisfying as the peaking control on high-end EVFs, making the 300 eminently focusable. The only downside is that peaking is buried in the menus—there’ no external switch on the EVF, to save cost; and peaking can’t be assigned to a user button—so that toggling it on and off is not as quick and easy as it should be.

The 3.2″ flip-out LCD uses 1920×480 pixels and is about as sharp as a flip-out LCD comes; this is a noticeable improvement over the LCDs on previous affordable Panasonics, and one of the Panasonic reps at the show was grousing about how the 3700’s LCD isn’t as good.

The 300 offers DRS, Dynamic Range Stretch, which works much like the Highlights & Shadows controls in many image editors, pulling more detail out of the extremes of exposure. Mouse over this image to see the difference: 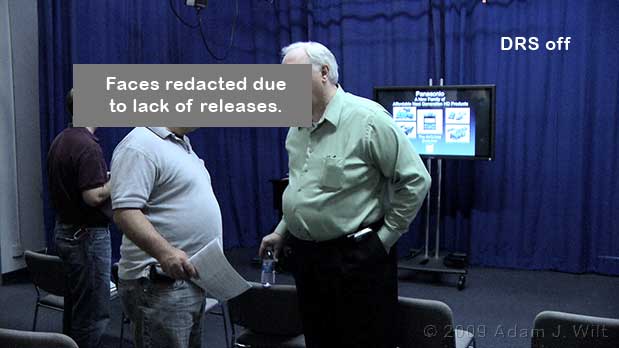 HXP300: DRS off vs. on (note: JavaScript must be enabled for the mouseover to work).

DRS, like pre-record, loop recording, single-framing, interval recording, and Flash Band Compensation, only works in 1080/60i, 1080/30p, and 720/60p modes. It’s really designed as a shot-saver for newsies in difficult lighting conditions, and yeah, you probably don’t want to use it in cinematic work (it can cause image-orthicon-like local contrast variations; see the HPX170’s hummingbird images), but it’d be nice to have it available to play with in 24p modes nonetheless.

The menus on the 300 will be instantly familiar to users of the DVX100, HVX200, and HPX500 camcorders. Six scene files offer substantial image tweakability, though they don’t have the (perhaps obsessive) depth of image adjustments as on Panasonic’s high-end cameras—or the menus on the Sony EX1 and EX3 for that matter. Several standard video gammas are provided, along with Panasonic’s justly famed Cine-like D and Cine-like V gammas, the latter being my favorite Panny gamma for 99% of my shooting. Four color matrices plus the usual saturation and color temperature tweaks, H and V detail and coring, master black level, skin detail, and vertical detail setting (to avoid interfield twitter on interlaced CRTs) are all similar to those on other affordable Panasonics.

Like the HPX170, the HPX300 lets you call up a waveform monitor or vectorscope on the LCD (but not in the EVF, as far as I could tell: this works fine on the 170 where the LCD is viewable while using the EVF; on the HPX300 with the LCD next to your cheek, the ergonomics are more questionable—but you always have zebras in the EVF). These are very helpful and it’s a wonder more cameras don’t have them.

Operationally, I found the camera very pleasant to work with. The EVF was nice and crisp and I never worried about focus (though having more magnification in the EVF lens would have been welcome). I saw a bit of flare when shooting into strong light, but that flare was only in the EVF’s optics; it didn’t show on the LCD or in recorded clips.

The 17x Fujinon acquitted itself with valor, showing minimal distortion and plenty of sharpness. Whatever chromatic aberration it has is cleaned up nicely by the 300’s chromatic aberration correction; see the composite zone plate image above and remember that the circular target is at the edge of the frame and the horizontal sweep is in the upper right corner. The lens handles like any other “real” ENG lens, with a smoothly responsive power zoom rocker. Manual zoom and focus rings turn smoothly and precisely. Bokeh was pleasing, with average or below-average prism-induced vertical green/magenta separation.

The HPX300 has “big camera” controls and ergonomics, with the added advantage of P2 slots on the operator’s side, so there’s no need to reposition yourself or the camera to change cards. It’s heavy enough for stability yet light as shoulder-mount cameras go (about 11 pounds), and it balanced well on my shoulder. I spent about twenty minutes handholding, and never felt fatigued or stressed in the slightest.

Overall, I was quite pleased by the camera’s performance and functionality, and look forward to exploring it further—when time allows, which won’t be for a while, alas.

Panasonic has special leasing / rebate offers on the HPX300 through 31 October 2009, which makes it awfully tempting… if you’re considering it, note that the HPX300 package comes with EVF, 17x lens, and shoulder strap, but neither a tripod quick-release plate nor power (batteries and/or AC adapter) are included. This is normal for “real” ENG-style cameras, but may come as a bit of a shock if you’re used to lower-end gear with all accessories included.