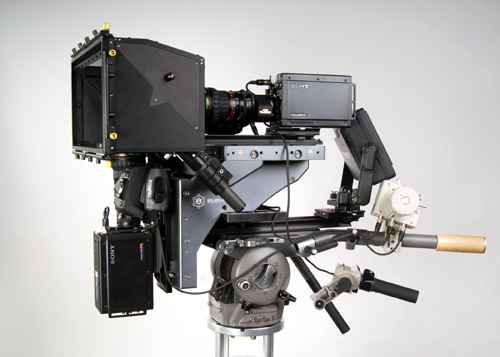 In the six months since Element Technica unveiled its Technica 3D Quasar rig at the IBC convention in Amsterdam, the Quasar has quickly found its home in feature film, sports and entertainment venue productions. At the 2010 NAB Convention, the Quasar rig will be seen in technology demonstrations at vendor booths throughout the exhibition halls.

The Technica 3D stereoscopic rigs, which precisely align and control the stereo camera pair used in 3D filmmaking and video productions, have revolutionized 3D production through ease and simplicity of setup and operation, and their ability to be easily configured and switched between side-by-side and both over/thru and under/thru beam-splitter modes. Quasar rigs can be assembled, mounted with cameras and aligned in less than 30 minutes, and can be switched between side-by-side and beam-splitter modes, and vice-versa, in under 10 minutes.

The Quasar rig is designed for full-sized HD cameras, including the RED ONE, Sony F23/35 and 1500, ARRI D-21 and Genesis. Quasar rigs will be on display and demonstrated at NAB in the Element Technica booth, C12326, near the Sony booth toward the back of the C-Hall.

Technica 3D rigs will also be shown in the following vendors’ booths:
Sony Electronics (C11001) will showcase its new HDC-P1 cameras, designed from the ground up for 3D imaging, in a Technica 3D Quasar rig. Control of the rig, lens and camera will be interfaced with Sony’s MPE-200 3D Processor, which provides a variety of digital adjustments to the stereo imaging HD cameras. Sony will also display a pair of its EX3 camcorders mounted on Element Technica’s brand new Neutron rig.

Thales Angenieux (C6037) will interface its Angenieux OPTIMO Rouge 16-42 Digital Cinema zoom lenses with the 3D-enhancing Digital Parallax Scanning (DPS) technology from Vision III and a Technica 3D Quasar rig in a technology demonstration that illustrates how classic two-camera 3D production techniques can be enhanced using DPS. The Quasar rig will be configured in the over/thru mode.

Miranda (N2515) will use a stereoscopic pair of HD cameras mounted on a Quasar rig as an input source to demonstrate the 3D capabilities of Miranda’s Kaleido-Modular multi-viewer system.