Shooting in the desert on the Varicam LT and Sony F5

There I stood in Wooden Camera’s booth at NAB 2016. The woman in front of me cocked her head to one side and gave me a perplexed look. The kind of look which read: “WTF are you talking about?” This was not totally unexpected. I had just walked into her booth and asked to take some of Wooden Camera’s gear out for a night shot. No one had told her the higher ups had already agreed to the “loaner.” Nor was I about to drop $200 on a single lens support for this shoot, not unless I had too. For a brief moment, we stood there at an impasse.

It was NAB 2016 with all the hustle, bustle, and craziness we all come to expect year after year. This time was no different with one exception. Brian Murie from Take One Film and Video offered to let me shoot on their Varicam LT for one night. Next, my buddy Nathan, parlayed this into P + S Technik loaning us their 1.5x anamorphic zoom for the night too. Varicam LT plus Anamorphic zoom? We saw every reason to be excited, but we needed batteries, a monitor capable of de-squeezing 1.5x, and a lens support for the zoom. We pulled every favor we could which left me standing in Wooden Camera’s booth lacking the one piece of gear left: the lens support. The woman who gave me the “WTF” look relented, handed over the lens support, and probably thought she would never see it, or me, again. Below is what we shot. It was not planned before hand.

What does one shoot with the Varicam LT and P + S Technik’s great 1.5x anamorphic zoom. We headed out into the desert to avoid any Las Vegas cliches. There we exhausted our single charged Blue Shape gold mount battery for the Varicam LT, but the excitement and energy was still bubbling. So we headed back to the hotel and grabbed Nathan’s Sony F5 and it’s v-mount batteries. On the suggestion from Elijah Light(co-producer/actor) we bee-lined to the Pinball Museum. Among the relic of games past we shot with P + S Technik’s newest lens until we felt like we had enough of “something.” 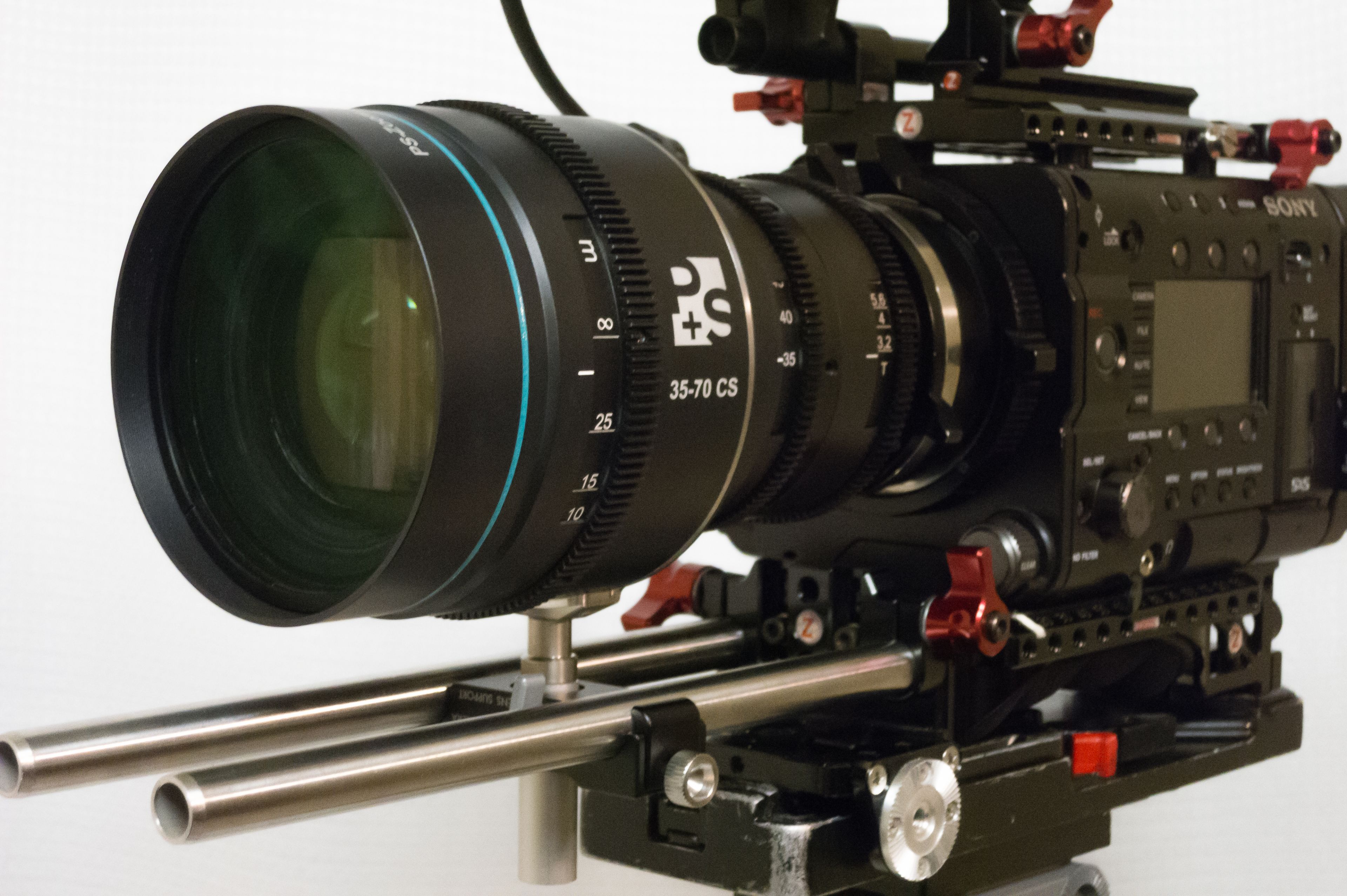 This is not a 1.33x nor a 2.0x anamorphic. Nope. 1.5x all the way. The “CS” in the name stands for CinemaScope. P + S Technik designed this lens to be used with commonly found 16 x 9 digital sensors found on the camera market now. Why the 1.5x? Nathan Thompson, one of the film’s shooters, says “The 1.5x stretch gives bokeh that’s a bit less vertically stretched and pronounced than 2x glass, but it still offers that anamorphic character. Considering that this anamorphic Zoom will size correctly for a 2.35:1 finish on any common 16 by 9 sensor, this becomes an incredibly attractive anamorphic solution.” In the edit, Andy Firkus, and I, found the 1.5x anamorphic footage to be easy to de-squeeze in Adobe Premiere. It was simple and simple is exactly where these things should fall.

What I loved about the 35-70mm zoom was this: if you wanted flare, you could easily get it; yet the lens flare could be controlled, if so desired. Light sources pointed straight at the lens gave us classic anamorphic flare with nice horizontal streaks. This was not a super clean lens. Nor was the lens clinical with the image it create. The 35-70mm zoom delivered character. “In direct light it flares easily. Multiple sources will give you multiple horizontal streaks that are quite prevalent. From softer sources like fluorescents it gives a more hazy, diffused feel” said Nathan. 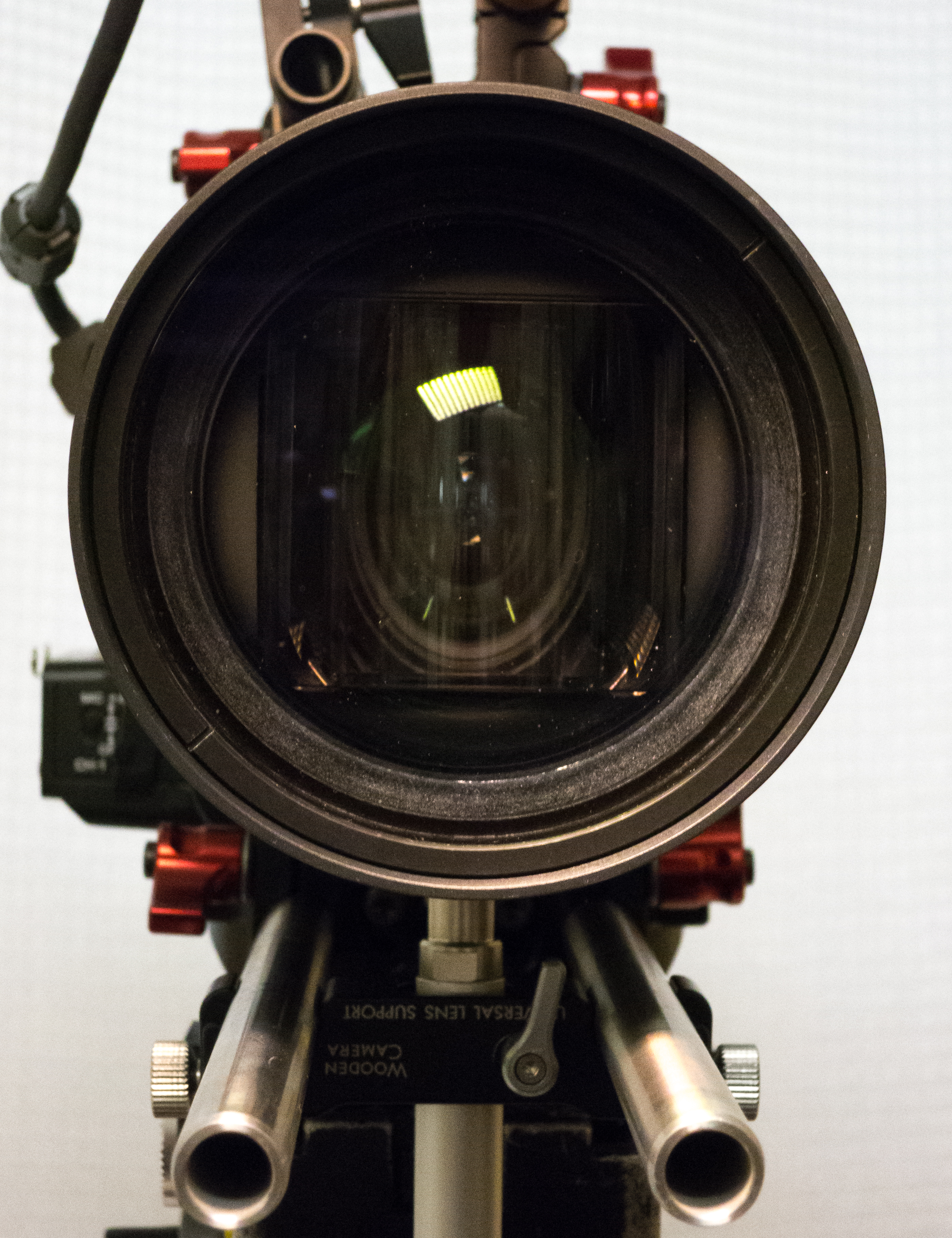 Considering we were shooting on the Varicam LT and Sony F5, with ISO settings at 800/5000, and 2000 respectively, I felt like the T/3.4 T was not limiting in any way. This was, more or less, a run and gun shoot. No charts were used to test edge softness or vignetting. So, we cannot say, with any amount of weight behind our words, exactly how this lens will respond in different situations. I can say, the shooting was easy and the lighting wasn’t a problem. Nathan had this to offer, “In low light, to my eye the lens did an outstanding job preserving clarity and resolution. From my limited use in a more run and gun scenario, it held up impressively well wide open at all focal lengths. I did not feel restricted from tapping into any of the lenses focal length or t stops. This was a very freeing feeling that allowed me to focus more on what I was shooting and less on avoiding potential problems.”

According to P + S Technik the closest the 35-70 zoom close focus falls at a respectable 2 meters. In imperial, that’s about 6 feet. When shooting in the Pinball museum, the focus felt like it fell a touch closer to me. Nathan felt the say way, “Close focus on the lens was very workable at around 3 feet, or a bit more. Sometimes I instinctively got too close to subjects and had to back up to find focus, but the zoom range typically got me pretty close to the tight framing I wanted. Ultimately I would want a set of diopters on hand though.” 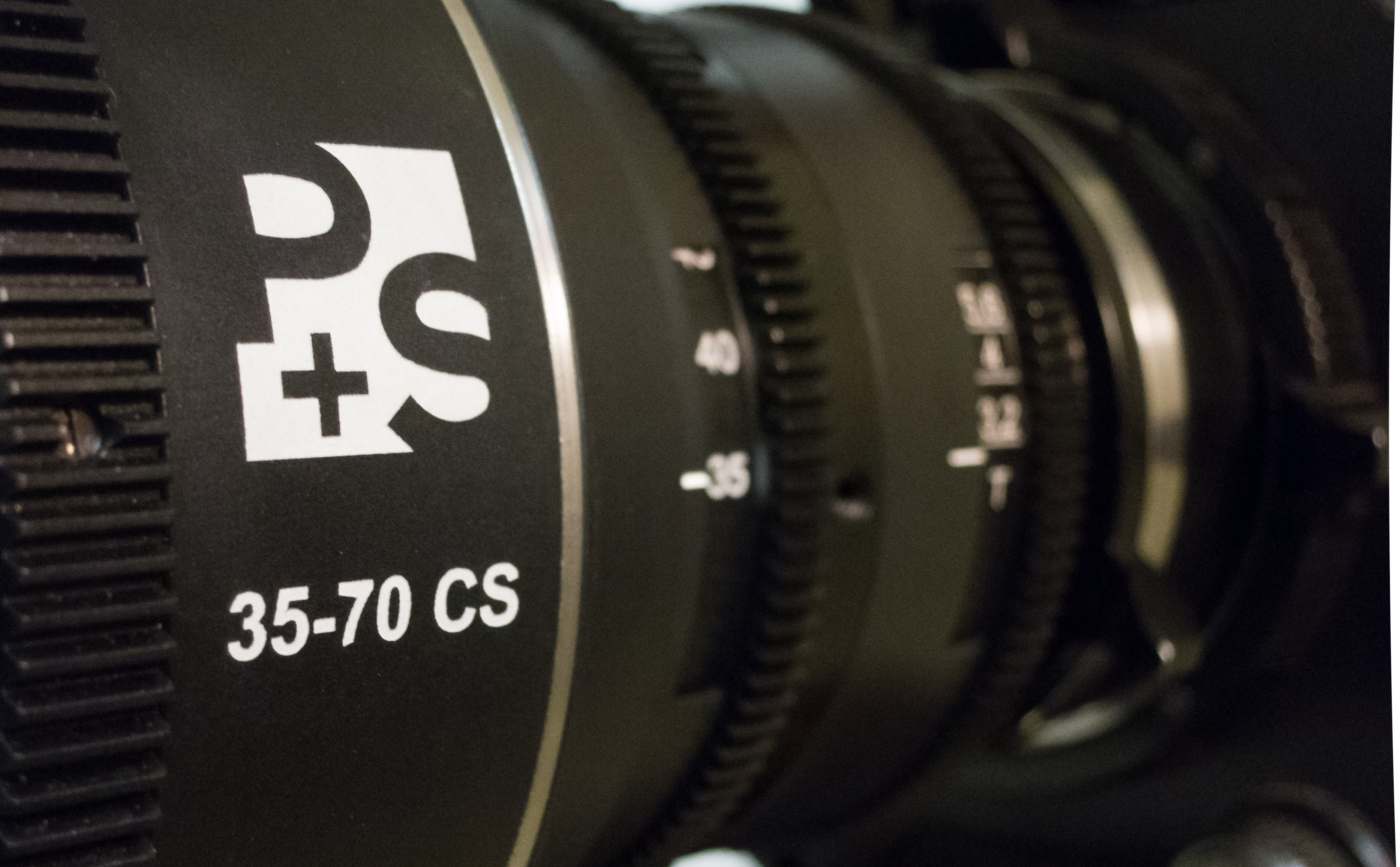 “On the Panasonic varicam LT, a 16 by 9 sensor, I was able to get both front seats in frame while shooting from the backseat of a mid-sized sedan. Overall the lens is more of a solution for wide to medium coverage, which makes sense considering P+S may have a longer anamorphic zoom on the way soon,” said Nathan. I have to agree with Nathan’s statement here. This is wide zoom. Actually, it felt very wide to me, which I loved. P + S Technik told us to expect a longer lens 1.5x anamorphic zoom to be made in the near future. The two lenses will be a matching pair. I do not know what focal length the longer zoom will be.

The lens we tested was PL, but on P + S Technik’s website they list three more lens mount options: Sony E-mount, Canon EF-Mount, and Arri PL. These lens mount options are extra and you’ll probably be wise to let P + S Technik change the mount for you. At least, that is my opinion. I could be wrong. It won’t be the first time. For shooters like me, and rental houses, this means you can feel comfortable in investing in the 35-70mm zoom, because you will not be stuck with a single lens mount. Hopefully, changing lens mounts is easier than I imagine.

For a brand new lens 21,500 Euro does not seem like a ton, but what do I know. I’m not buying brand new anamorphic zooms just because I want to shoot on one for fun. No, I have near zero experience when it comes to the price of anamorphic zooms. From the research I’ve done, this seems like a reasonable price for a lens mount changeable, easy to shoot solo, 1.5x anamorphic zoom. Yes, you can try to save yourself money by going with older lenses or an adapter on the front of a lens. Both of these options would do you fine, but this lens at this price feels like a steal.

The one big take-away for this strange shoot in Las Vegas was just how damn easy it all turned out. The lens was extremely easy to use just like any other PL lens, and the 1.5x squeeze in the viewfinder didn’t make shooting/composing a chore. The weight of the lens felt great in hand and falls just shy of seven pounds. With a little more kit building we could have had the Varicam LT, or Sony F5, prepped to shoot handheld all day comfortably. 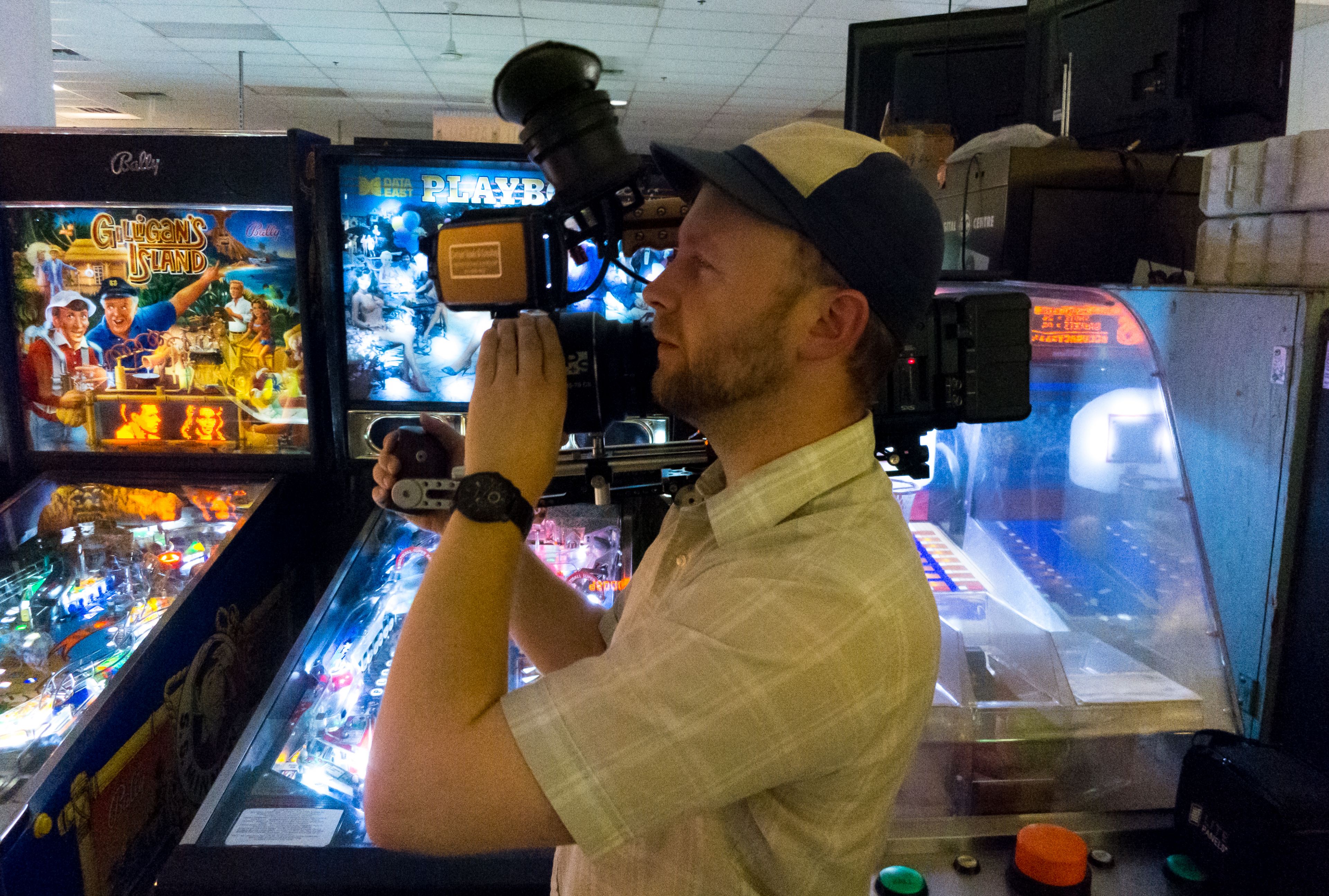 “Overall, this lens is unquestionably of cinematic caliber. It has beautiful contrast and color rendition, but it isn’t so big that it requires a ridiculous amount of crew or support,” said Nathan. My sentiments exactly. This lens delivered a cinematic image and was easy to use. In many ways, I cannot stop thinking about this lens and its image. Yes, I’ve been producing a short film shot on the lens so editing, story, and sound were top of mind, but I can’t shake this lens away. I was too impressed immediately. 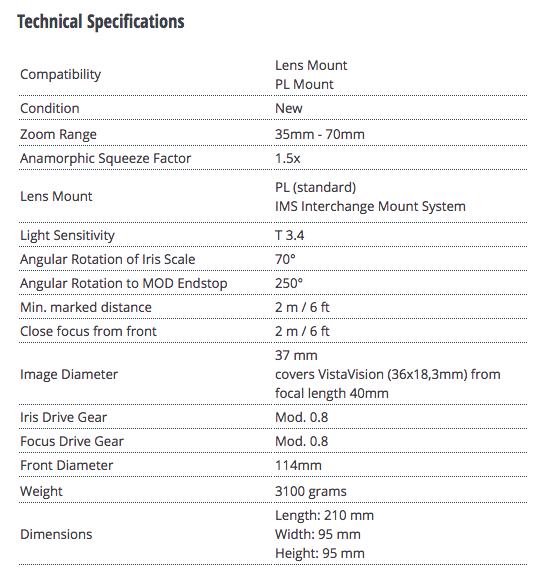 Founded in 1990 by former ARRI engineers, P + S Technik built a reputation for producing innovative solutions and products to help create high-quality and outstanding images. If you remember the Mini DV days you may remember cameras like the DVX-100 and HVX200 from Panasonic or the XL1 and XLH1 from Canon. If you remember those cameras you likely remember the 35mm lens adapters. These adapters allowed the use of Nikon F, Canon FD, and PL lens on older 1/3 inch chip cameras giving you the 35mm “look.” Well, P + S Technik made one of the better 35mm lens adapters. I used theirs on one of my first music videos. Now, they’re more into the cinema lens side of the business. My buddy Nathan turned to them to rehouse his Vintage Cooke Panchros. They’ll not only rehouse similar lenses for you, but also Leica R, Angenieux, Canon K35, and Kinoptik to name a few.

It was with the help of many that allowed us to shoot what we shot. First, Brian Murie and Take One Film and Video for lending us their Panasonic Varicam LT for one evening. Convergent Design for loaning us an Odyssey 7Q+ because it does a 1.5x de-squeeze. Blue Shape for loaning us two gold mount batteries even if one was not fully charged. Wooden Camera for loaning us a lens support. To your surprise, I’m guessing, we brought it back. Elijah Light, Actor/Co-producer, suggested the locations, Alan Brazzell, Nathan Thompson, and I shot, Andy Firkus edited, and Scott Hallgren did music and sound design. Yours truly saw the randomness of what we shot through to it’s final form. 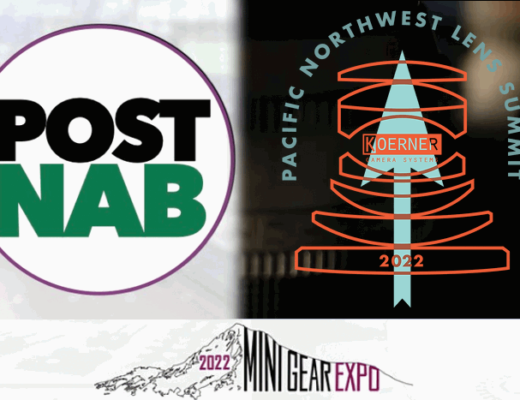 Now that NAB has come and gone, there are other in-person events re-emerging after the COVID hiatus. This month...