In parts 1-3 of the PsF’s missing workflow series, we introduced the terms benign PsF & malignant PsF, and revealed the PsF status of several AVCHD cameras from 3 manufacturers. In #4, we did the same with several HD recorders. In #5, we revealed how one recorder manufacturer is offering its own software to counteract the hostile HDMI output found on many cameras. In #6, I published an open letter to all pro AVCHD manufacturers. In #7, I covered how to deal with PsF with Premiere Pro CS5.5. In #8, I showed how ClipWrap is an excellent solution for many Mac editors. In #9, I discussed PsF with the sub US$100 Adobe Premiere Elements 10. Now in part 10, I’ll cover how to deal with 25PsF and 29.97PsF with Final Cut Pro X.

What were previously called sequences in Final Cut Pro are now called projects. If you are going to create a 1080p project in FCP X at 25p or 29.97p (especially if you’ve shot on AVCHD), avoid using the automatic function (called “Set based on first video clip”). Instead, set the sequence manually while you create it as shown in the following screenshot. First select 1080p in the first pulldown menu. Next the resolution (1920×1080) and finally 25p or 29.97p depending upon your situation.

How to assure that your 25PsF and 29.97PsF footage is treated as progressive by FCP X

Sometimes, FCP X automatically detects PsF as progressive, but it depends whether the camera has recorded what we defined back in part 1 of the PsF missing workflow as benign PsF or malignant PsF. If the camera records malignant PsF, unfortunately as of version 10.0.3, Final Cut Pro X is tricked into believing that it is interlaced. To avoid the pitfalls and side effects described back in part 1 of this PsF’s missing workflow, you must inform FCP X manually that it should treat the footage as progressive, kind of like a diplomat in customs. Of course, you should only do this when you are absolutely sure that the footage was shot as PsF, which in the case of Canon is PF25 or the so-called “PF30” (which is actually 29.97PsF) with the XA10 camera.

Select the clips in the Event that you are absolutely sure were recorded as 25PsF or 29.97PsF (including Canon’s PF25 and so-called “PF30”). Then look at the information about it in FCP’s Inspector. In the Inspector’s Basic View, you’ll either see the clip as 1080i or 1080p. If you know you shot in PF25 or “PF30” (or 25p or 29.97p with some other AVCHD camera) and you see 1080i, you know that Final Cut Pro X mistakenly believes that it’s interlaced footage. Here’s an example: 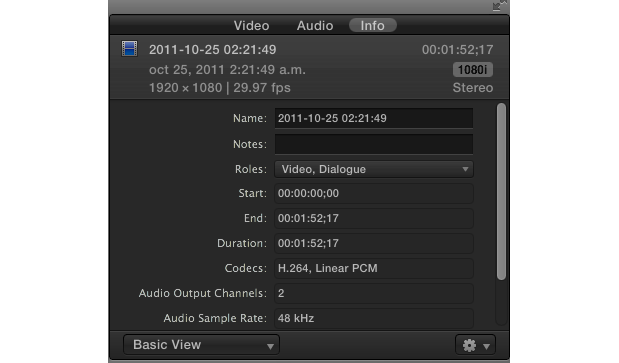 An AVCHD 1080/29.97p recorded as Malignant PsF and misinterpreted by Final Cut Pro X as if it were interlaced.

You can correct the situation by clicking on Basic View in the Inspector and changing it to Settings View. 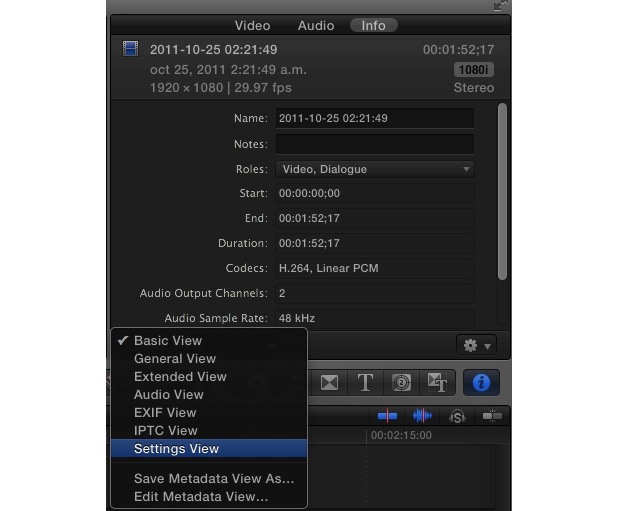 Within the Settings View, change the Field Dominance Override setting to Progressive. 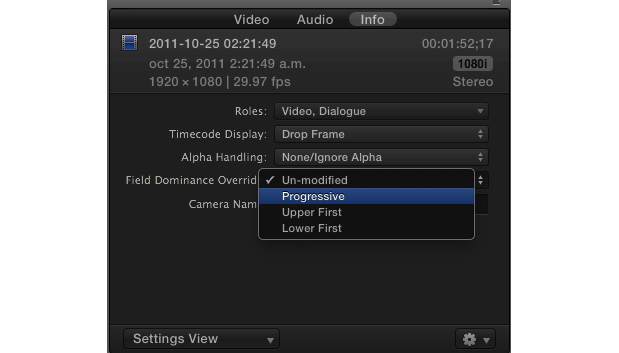 Then go back to the Basic View and see if FCP X is already showing the clip as 1080p or whether it is still showing it as 1080i. If it still appears at the top of the Basic View of the Inspector as 1080i, quit FCP X and then relaunch it. (With FCP X, it is always saving, so you won’t lose anything and it will be very quick.) At that point (assuming you’ve followed the prior steps correctly), it will now appear as 1080p.

Note 1: I consider it a bug that sometimes FCP X does not immediately recognize the clip as 1080p after assigning it as progressive. I don’t know whether it is absolutely necessary to quit and relaunch FCP X, but until someone explains and convinces me that it is not absolutely necessary (or until an update comes that makes it recognize it immediately), I still do it, and recommend that you do.

Note 2: If you have several similar clips that you are absolutely sure were recorded as PsF (i.e. PF25 or “PF30”, or 25p or 29.97p with some other AVCHD camera that records malignant PsF), you can select multiple PsF clips simultaneously in the Event, and follow the same procedure with all of them at once. Just be sure to do it only with PsF clips, never with truly interlaced clips. 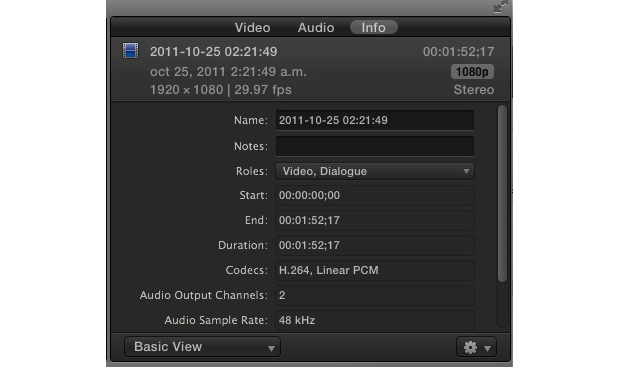 An AVCHD 1080/29.97p recorded as Malignant PsF after being corrected manually in FCP X. Now it is treated as progressive.

The above scenario is bearable if all of your clips are of the same type (i.e. all malignant PsF). However, if you receive some clips that are truly interlaced (and should indeed be subject to de-interlacing by the editing program if to be combined with other progressive footage for a final progressive delivery), then the process shown above can be tedious and subject to the pitfalls and negative side effects of human error if you neglect to Field Dominance Override: Progressive on some clips, or do so inappropriately with others. That’s why in part 8 of PsF’s missing workflow, I covered an inexpensive third-party application (ClipWrap) that handles this for you automatically, quickly and accurately, with some other advantages to boot.