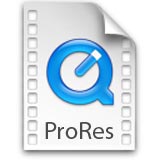 Apple’s ProRes codec is great, boasting great images and manageable files sizes, but its wider adoption is hampered by its proprietary distribution model. When Apple got into the editing business at the turn of the century it was a very different company. Avid had threatened to abandon the Mac platform, and Apple wanted to continue selling high end workstations to the professional video market. Few dared to imagine that Final Cut Pro would eventually challenge Avid as the dominant professional NLE.

While I’ve been quite pleased using ProRes 422 as an editing codec, I’ve been hampered in adopting it in a wider range of tasks. Visually, ProRes compares well to Avid’s DNxHD family of codecs, but unlike DNxHD ProRes is Mac-only. I can’t send a ProRes encoded QuickTime file to a PC for encoding, as a source for After Effects work, or import into an Avid or Premiere Pro system. Because Avid’s DNxHD is cross-platform, and Avid has a track record of supporting legacy codecs in later revisions, I have used all manner of Avid codecs for archiving purposes.

Most importantly, Avid allows me to share its codecs with clients and colleagues. By making its codecs available for download, I can be confident that anyone who needs to open my files can. (One notable exception: Avid’s IMX codecs are not publicly available due to licensing issues.)

ProRes only ships with Final Cut Studio 2. There’s no publicly available download. I’m not authorized to zip them up and email them to a client.

While Avid aggressively sought to have its DNxHD codecs declared VC-3 compliant by SMPTE, made the codecs available for third party licensing, and increased their usability to a broad range of post production pros by adding alpha channel support, Apple has clung to its traditionally closed, proprietary model. It’s hard to understand what Apple gains from this approach.

Development of Apple’s ProApps has proceeded at a healthy pace. Extending Apple’s industry reach through ProRes can only be a good thing. Since Apple’s saving all that money passing on NAB, maybe a few development dollars towards a cross-platform, public release of ProRes might be a nice consolation prize.

If Apple remains completely averse to a free, public release, it might consider bundling it with QuickTime Pro (assuming Apple plans on keeping ProApps in the corporate fold).