I have to say, I do wish I was a kid today with all this filmmaking technology right in the palm in your (or your parent’s) hand

The rumors were true (do we really get any Apple surprises anymore?) that the new iPhone 13 Pro will get internal ProRes recording and a new Cinematic Mode which is kind of like portrait mode for video but with some intelligent AI to help with selective focus. Because selective focus is cinematic! 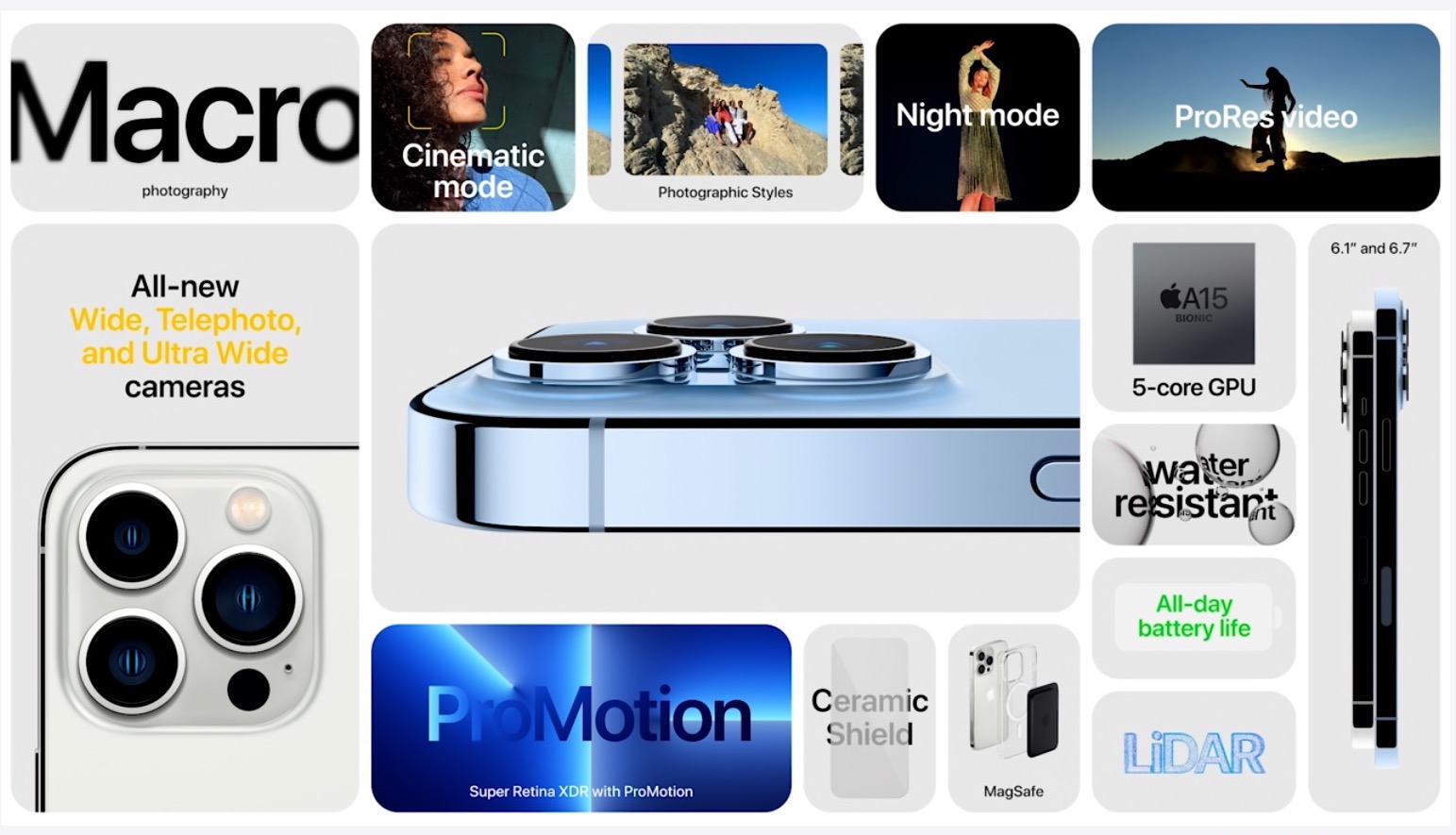 On the one hand, ProRes recording on an iPhone might seem like just another feature bump to give Apple something new in an already very capable phone but as Phil Rhodes pointed out this morning it could be something a bit more. I mean, we have Apple ProRaw as a capture format for photos on some iPhones so why not ProRes for video? It’s coming to iPhone 13 Pro later in the year. It was a relatively passing mention of this very important feature to many pros but the announcement was there.

You’ll look for that little logo in the corner as you shoot. 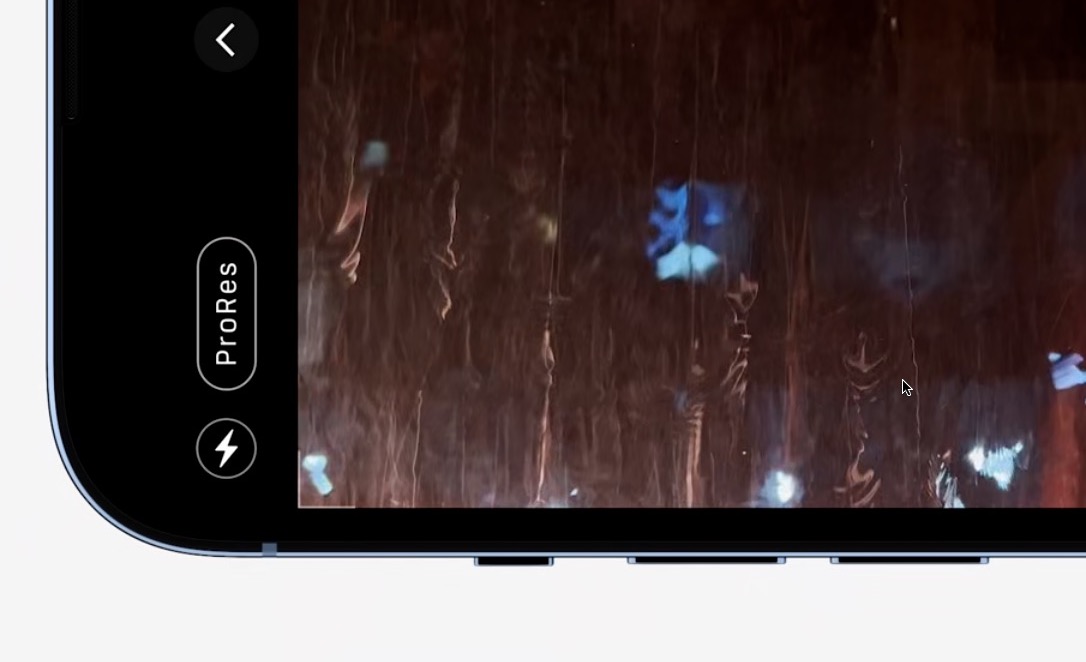 They do say the new iPhone 13 Pro produces “pro-level video.”  You can “record and edit” in ProRes. That’s cool. The iPhone 13 Pro webpage has a section on the coming ProRes feature that says this:

The high color fidelity and low compression of ProRes let you record, edit, and deliver broadcast-ready content on the go. Now you can complete a project in ProRes entirely on your iPhone. Or easily bring ProRes videos from your iPhone into Final Cut Pro on your Mac.

I wouldn’t read anything into that as I’m sure you’ll be able to edit the iPhone 13 Pro ProRes in any NLE. And I bet LumaFusion will scream with ProRes. 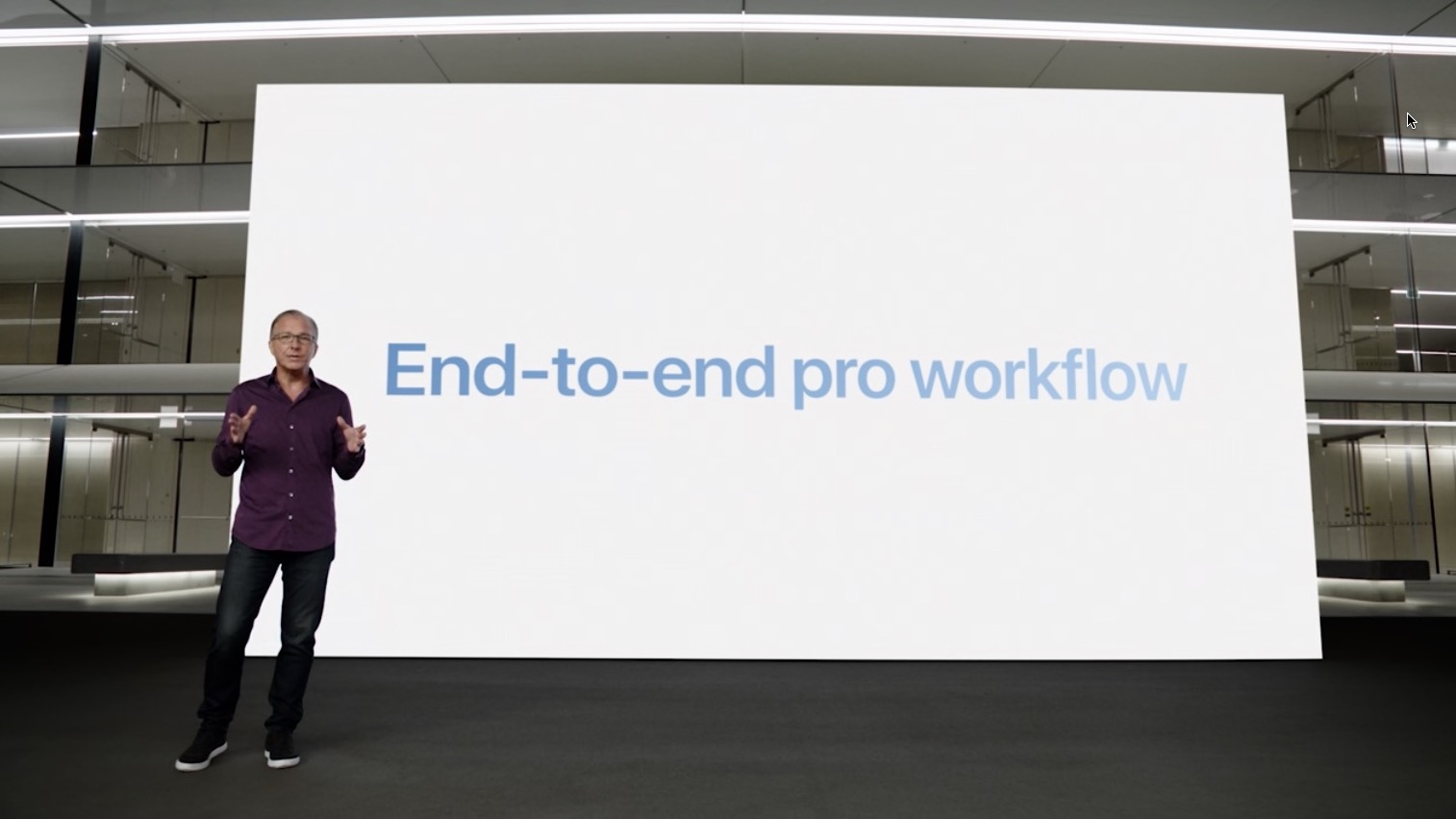 As someone working in post-production, I give a thumbs up to this addition of internal ProRes recording to the iPhone as another step toward the inevitable future we face: more phone footage funneling into the edit suite. I don’t know how much actual “end-to-end” production there will be, literally keeping everything on the phone, but I guess if you have something to prove or are in a contest or a bet you have the option.

Speaking of phone footage in the edit suite… it’s already happening. If someone doesn’t whip out their phone to capture yet another angle on a shoot then I assume they must have actually planned their shoot well. Most phone footage that does find its way to edit has to be transcoded anyway to get it out of the HEIF/HEVC codec. ProRes on the phone will make this step unnecessary and should provide fewer artifacts in those shaky running shots or clips of confetti streaming across the entire screen. Plus more dynamic range will be a godsend when color grading as those phone clips inevitably end up with the sun somewhere in the background.

I guess what is going to make this all possible would be these new video encoder and decoder chips.

While it isn’t a dedicated ProRes chip (what do you think this is an Afterburner in a phone?) I’d bet there’s some ProRes tech inside there.

One thing that wasn’t mentioned that we are all wonder about is exactly what flavor or ProRes these phones will record. ProRes takes up a lot more space than H.264/H.265/HEVC and the better the flavor or ProRes the higher the bit rate so the more storage space per minute.

Yes, there is a new 1 TB iPhone 13 Pro so if you’re planning to shoot iPhone 13 Pro ProRes you might have to spend a bit on the biggest phone.

If you’re working professionally in this business you know storage is a factor and will plan accordingly. It’s the regular folks, and yes potentially the YouTubers again, who don’t really understand this and will complain when their internal storage fills up because they have to shoot ProRes. Pro workflows don’t always work for the non-pro. That might sound elitist but it’s true. Perhaps some non-pros get some pro-level education and that is good.

I do agree with this one which is weird since the iPad lineup is moving to USB-C connections.

So what’s Pro about the iPhone 13 Pro still having a Lightning port? Can’t imagine transferring 100GB of ProRes from an iPhone to a drive via USB 2.0 Lightning. Yikes. How’s that gonna work? Just AirDrop it? 🤣😑

I’m sure more details will emerge about the exact ProRes flavor in these new iPhones. That is a big question left unanswered. Don’t be shocked if we get a very mobile-friendly flavor of ProRes. Somewhere between ProRes Proxy and ProRes LT with maybe some new ProRes Mojo applied. Remember, the ProRes spec came along in 2007.

The more intriguing thing for professorial film/video production is the new cinematic video addition of Cinematic Mode. I’m sure the pixel peepers and YouTube DMPs (that’s Director of Mobile Photography) will debate ad nauseam if this fake shallow depth of field is real enough but that debate is pointless because it now exists and will be used so we must deal with it. With Cinematic Mode, Apple gives a lesson in rack focus and how that makes things “cinematic.” It works intelligently and appears to just do the focus changes on its own by studying the art of cinematography. And using AI to see where people in the frame are looking, or so it would seem. Slick. 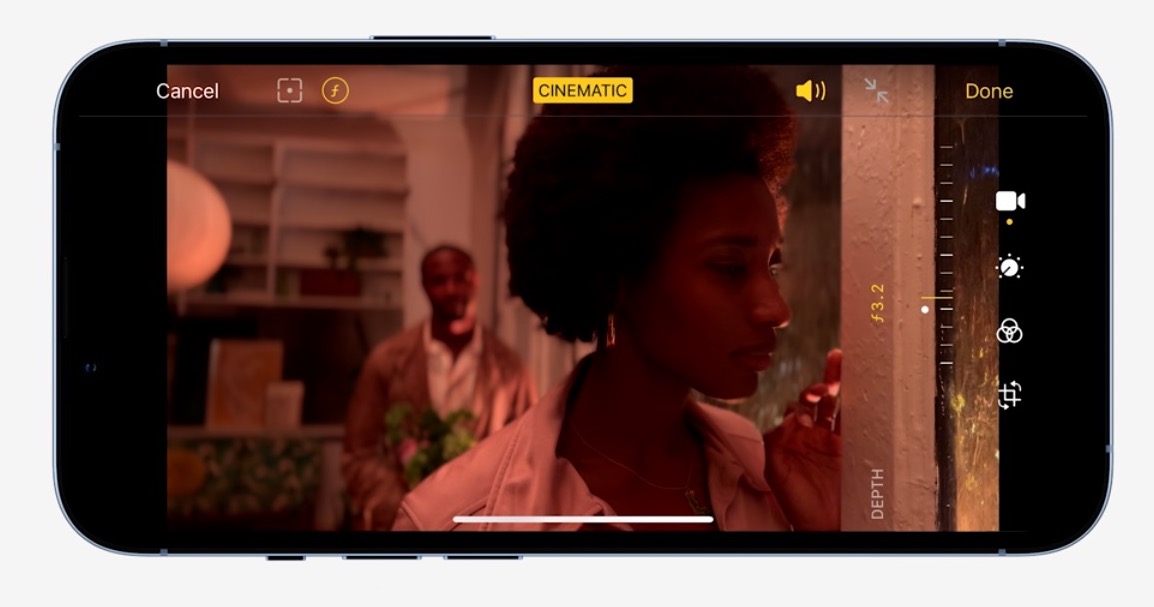 You get some options while you’re shooting as there is a new Cinematic option when you bring up the camera. 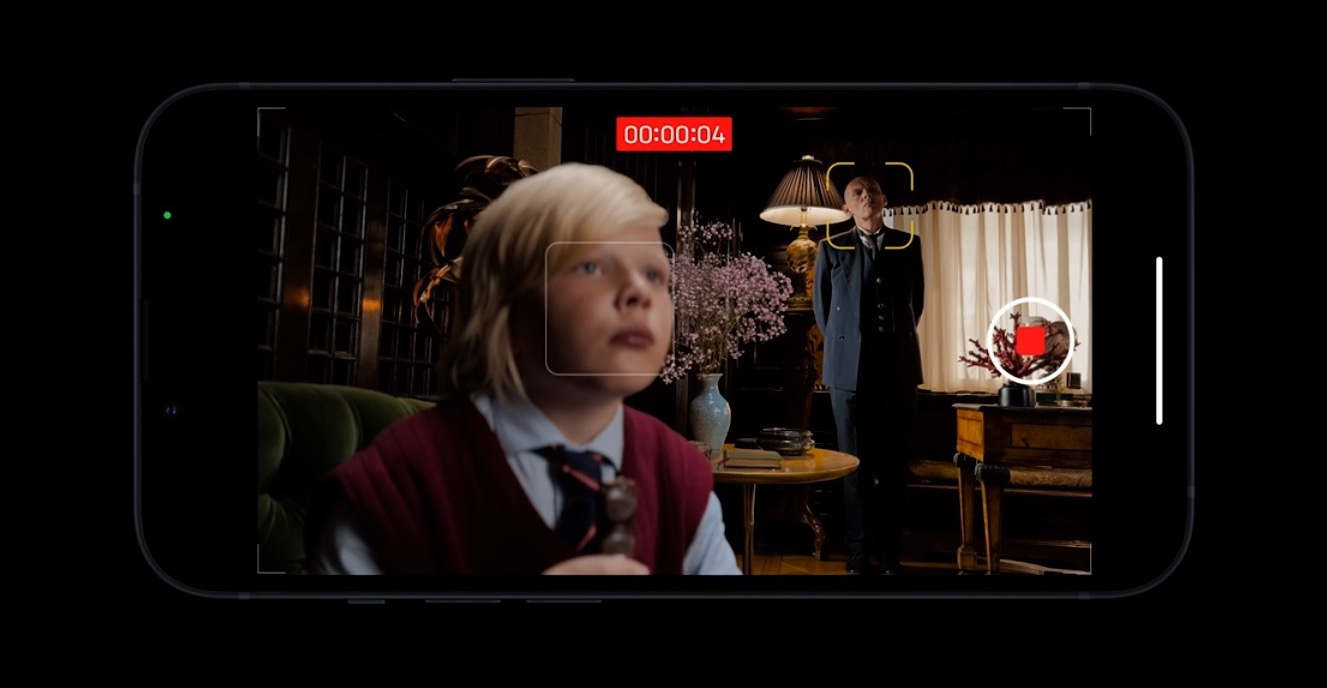 Thankfully you can do some manual adjustments of that too. Cinematic Mode shoots in Dobly Vision HDR. 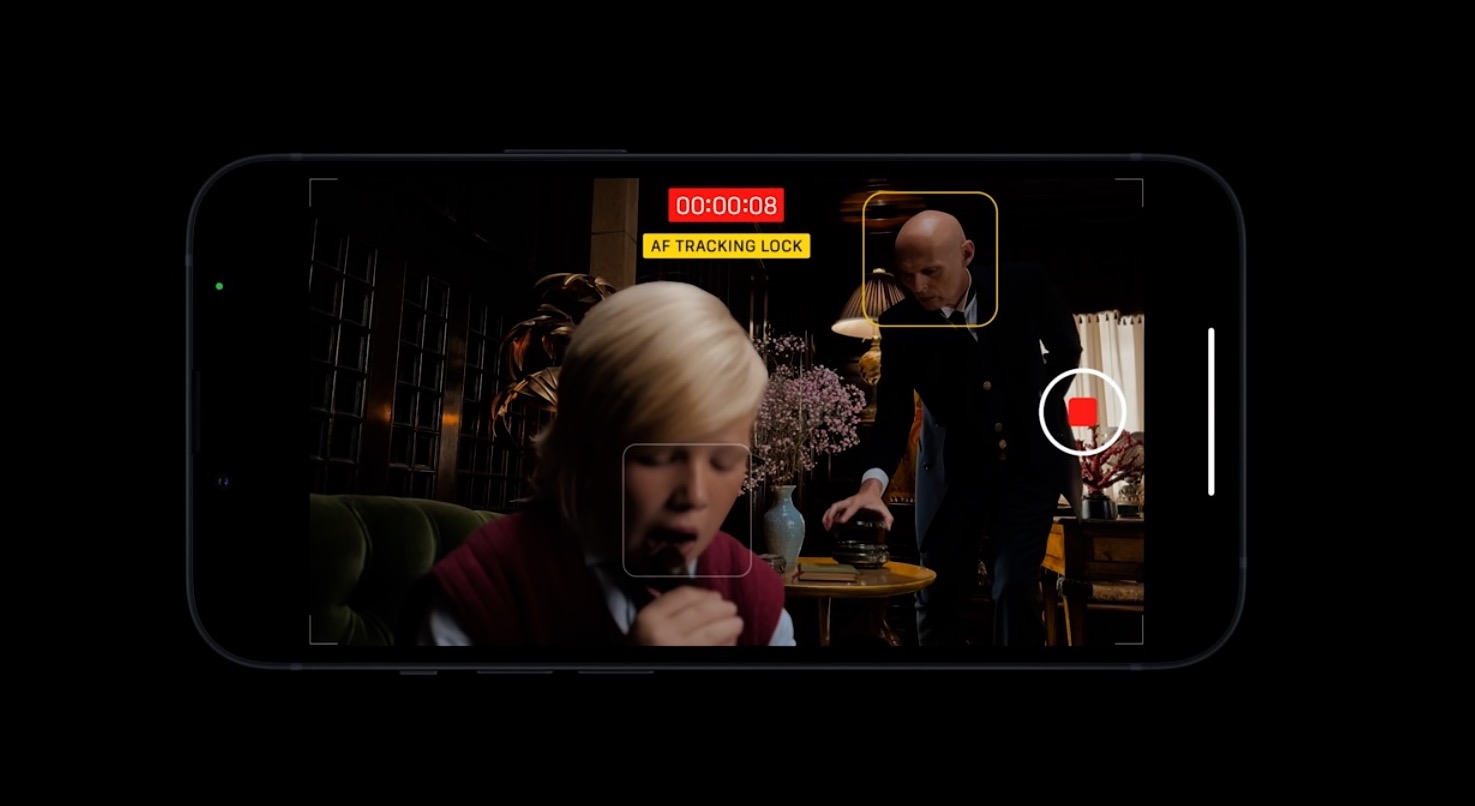 In the demo, they actually said you can “choose focus later.” There is a depth map built into the video you are capturing. I believe this has been talked about for years but this will be the most mainstream implementation of choosing your focus after you shoot in the video world.

If you read the footnotes of Apple’s press release on the iPhone 13 Pro you’ll see this:

The ability to edit the depth-of-field effect will be available in future updates to iMovie for macOS, Final Cut Pro, and require macOS Monterey. Final Cut Pro is available separately.

That will be cool and not shocking that it might be limited to Apple video editing apps. The ramped slow-motion video the iPhone records isn’t completely supported in all video editing apps either. Question is, will Apple offer this ability to other video editing applications. At least Final Cut Pro got a mention!

I read one article that compared this addition of ProRes on the iPhone and Cinematic Mode for video will be like the DSLR revolution, how the introduction of DSLRs completely changed the entire world of video production with easy access to shallow depth of field and over-saturation. DSLRs absolutely did change everything. Saying this new iPhone will have a similar result is hyperbole but we will see (hopefully) more better-looking videos all around. And that isn’t a bad thing. Even if most of that will be on YouTube.

Did the Cinematic Mode examples look flawless? No. But they pass the same threshold as Apple’s earliest Portrait mode stills did: they can enhance the storytelling component of a shot. pic.twitter.com/PdZV2WtqOG

But honestly, people are going to have fun with this. Especially kids.

The other iPhone 13 specs and announcements from the event today.

A new iPad that includes a new iPad Mini.

Okay, back to work.