A blazing fast RAID in a very small package.

I’ve been impressed by Promise’s Pegasus2 line of Thunderbolt-enabed RAID drives. They’re fast, reliable, come in multiple configurations (4 drives, 6 drives, 8 drives), and are low-cost as far as hardware-based RAIDs go. Now Promise is adding a new Pegasus2 to the lineup.

This one is the Pegasus2 M4 SSD ($2,499 list), and it’s all about the two Ps — Performance and Portability. It’s perfect for editors or DITs that want a small footprint and easy transportation, all the while enjoying blazing speeds that you’d normally need a far bigger RAID to achieve.

The M4 SSD’s one drawback is capacity. Since it’s built around four 512TB SSDs, the M4 is limited to a capacity of 2TB, and that gets whittled down to 1.5TB if you run it in a RAID 5 configuration for redundancy (in a RAID 5, any one of the M4’s disks can fail without losing your data). But even 1.5TB is enough space to handle a number of projects-in-progress, depending on the kind of work you do. 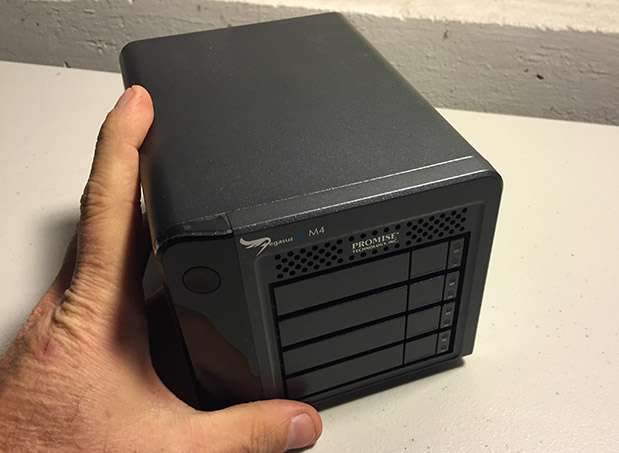 The M4 SSD has a list price of $2,499, but major retailers sell it for considerably less.

I had a month to use the new M4 for real-world work, and have the following impressions:

SPEED. Speed-wise, the M4 is pretty dazzling, thanks to its four SSDs working together. Configured in a RAID 5 and attached to a 2013 Mac Pro’s Thunderbolt 2 port, I used AJA’s Speed Test utility to measure the M4’s reads at 1136MB/s and writes at 823MB/s (I also used Blackmagic’s Disk Speed Utility and got similar scores). That means that you can use the M4 to edit multiple streams of any 2K or 1080 format around, not to mention variants of 4K, 5K and beyond. To put that in perspective, the 8-drive Pegasus2 R8 that I tested a year ago managed reads of 900MB/s and writes of 850MB/s, so the M4 is considerably faster than the far bigger, heavier R8.

Another popular way to configure the M4 is as a RAID 0 volume, meaning all four SSDs are stripped together into one super-fast volume with reads of 1153MB/s and writes of 1066MB/s, as tested with Blackmagic's utility (AJA reported similar scores). The drawback here is that there’s no safety net in case a single drive stops working or gets corrupted. If that happens, all your data goes the way of the Dodo, but that risk may be acceptable depending on your overall backup strategy. I personally run all my video RAIDs with redundancy (RAID 5 or RAID 6 where two drives can fail without data loss) but I’ve also run RAID 0 drives for years without a hitch. 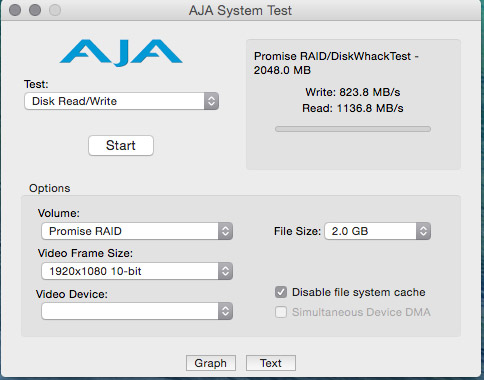 Configured as a RAID 5 (with one drive in redundancy), the little M4 was still faster than Promise's 8-drive Pegasus2 R8. 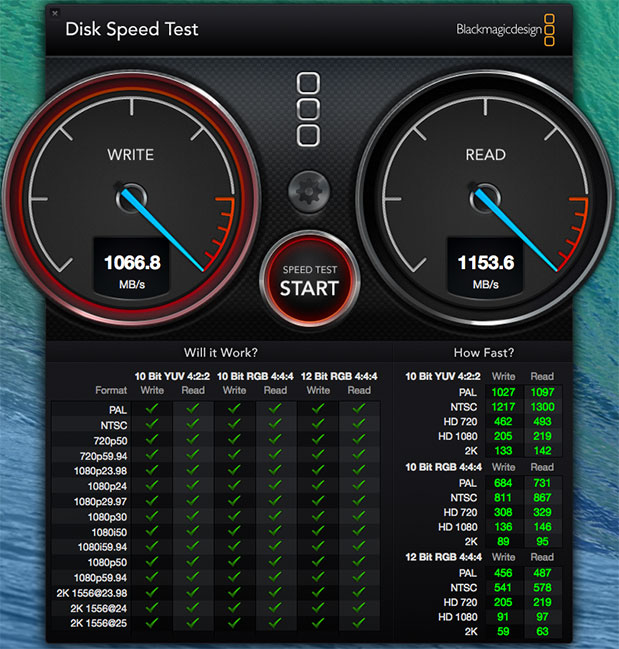 Configured as a RAID 0 (no drives in redundancy), the M4 was the fastest RAID I've seen using a Thunderbolt connection.

SIZE. The M4 is very small, with dimensions of about 6.5″ deep, 5″ wide and 4.5″ tall, and weighing in at about 5 pounds. You can grip it in one hand, and pack it away in a large laptop bag or any kind of backpack. With no moving parts beyond its fan, it’s also better suited to travel than RAIDs based on spinning disks. It has an internal power supply, so the only other thing you have to pack with it are a Thunderbolt and power cable.

NOISE. It does have a fan that constantly whirs away, but nothing that’s too obtrusive. Noisy drives bug me, and I’ve put even relatively quite drives 10 or 15 feet away from my workstation so I don’t have to hear them purring. I temporarily put the M4 right next to my workspace so I could keep an eye on it during its first couple of days of testing, and while I could hear it over my near-silent Mac Pro, I quickly forgot about it and it stayed there for the next month.

CONFIGURING. The M4 comes configured in a RAID 0, but it’s pretty straightforward to configure it to a RAID 5 using the included Promise Utility software. First use the utility to delete the Disk Array and the Logical Drive. Then create a new Disk Array, and then a new Logical Drive configured in any RAID mode you want. Once you do have your M4 running in the right configuration, the utility makes it very easy to monitor the status of the drives. 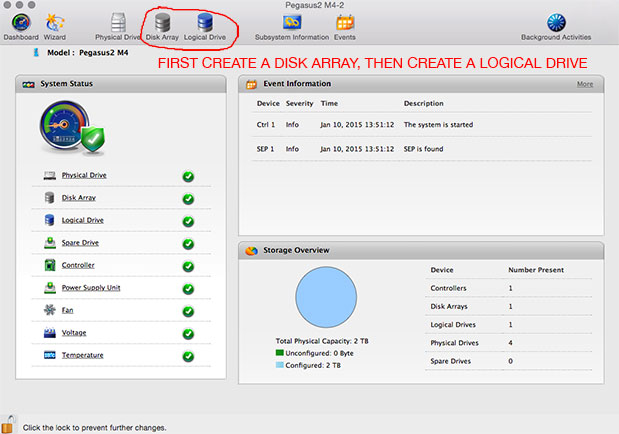 The Promise Utility gives you quick status on your RAID, and makes it fairly easy to reconfigure in different RAID modes (0, 1, 5, 6, 10).

SUPPORT. One of the things that I really appreciate about Promise Technology is how easy it is to get a human being on the phone. I’ve called Promise’s tech support a number of times with non-emergency questions, and always gotten a specialist within a couple of minutes.

EXPANDABILITY. If you ever want to expand the capacity of your RAID, you can add your own higher capacity 2.5” SSDs down the road. Promise keeps a list of approved drives in the Download Center section of its web site. Right now, the only SSD listed is one from Samsung, but Promise says other SSDs may work fine, they just haven’t been tested.

BIGGER, SLOWER, CHEAPER. You can also buy the M4 with standard 2.5” spinning hard drives, instead of the SSDs that I tested. You’ll double capacity to 4TB, and cut your price to $1,199, but speeds will also drop considerably.

Overall, I was again impressed by this latest edition to the Pegasus2 line up. At $2,499 list, the M4 is more of a speciality item, but nonetheless a great option for anyone who needs a RAID with the fastest speed in the smallest package.