An LED light with good color precision, power and control.

The Hexolux D7 LED light ($2400) is one of those lights that breaks ground because it can take the place of many conventional lights you’ve been using for years without the compromises that have typically characterized LEDs.

The D in D7 stands for “Daylight”…or very close to daylight, at least. Rated at 5300 kelvin, there’s not quite as much blue in the D7 as a light that delivers a more conventional 5600 kelvin color temperature. Some purists may be able to see that in footage, but I don't think it's much of an issue, and besides, there are plenty of other daylight balanced lights that miss the mark by a couple hundred kelvin as well. More importantly, I noticed that the D7 suffered from no appreciable green shift, which until recently has been rare for LED lights. Balance your camera for daylight and white looks white. That means you won’t have to take the time to gel the D7 to remove green, won’t lose light output in the process, and will have an easier time mixing the D7 with other lights you have on hand. 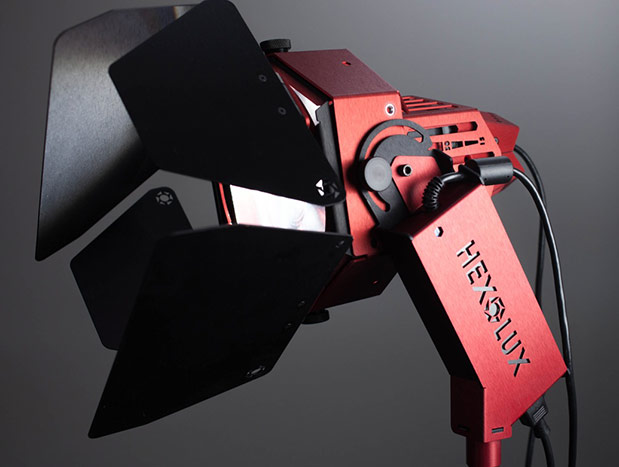 The Hexolux produces a flattering beam thanks to its 7-inch fresnel lens (made of durable, replaceable plastic), and you can loosen a knob on the fixture to spot the beam down to 11 degrees or flood it to 77. The fresnel lens also eliminates all the micro-shadows typically cast by the multiple point sources of conventional LED panels, and gives the light reasonably clean, crisp cuts when you shape it with barn doors and flags  — not as clean or crisp as my beloved Dedolights manage, but if you’re used to working with an Arri fresnel, you’ll feel at home with the Hexolux.

Unlike the LEDs of yesteryear, the Hexolux also has considerable power. It draws 150 watts when powered from the wall, but according to photometric tables, gives you a notch or two less light output than an Arri 650w tungsten fixture. For instance, at 5 ft with a 30 degree beam angle, an Arri delivers 910 foot-candles, while the Hexolux does 770. At 10 feet, the Arri does 228 while the Hexolux does 224. I’m comparing numbers reported on the Hexolux and Arri web sites, not my own hands-on tests. But I did get a chance to do a side-by-side comparison of the Hexolux and a Joker Bug 200 HMI. At 10 feet in full flood, the D7 measured f5.6 on my light meter, whereas the Joker with a frosted fresnel lens measured f5.6 8/10. So the Joker was a little more than 3/4s of a stop brighter in its most diffused state. When I spotted the Hexolux down to 11 degrees, however, it measured an F22, which was the same as the Joker with only its PAR beamer installed, but no lens. And the Hexolux’s spot had a much cleaner shape and more consistent brightness than what the Joker produces with just a beamer.

Finally, the D7 enjoys the typical benefits you’d expect from LEDs — low heat (you can always handle it without gloves) and the ability to dim it with negligible color shift. 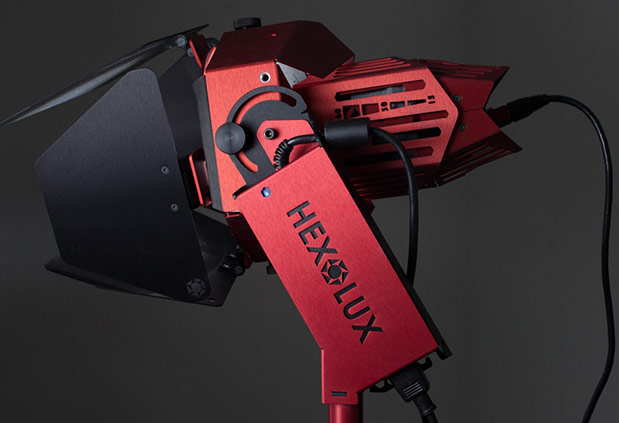 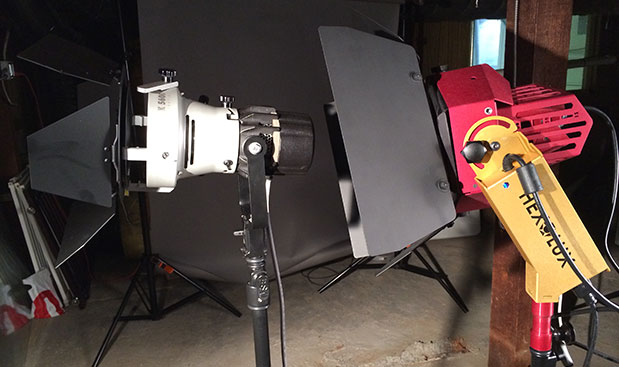 The Hexolux and a Joker Bug 200, for size comparison.

I had a chance to work with the D7 on a couple of real-world projects, and here are a few other impressions from my time with the light: 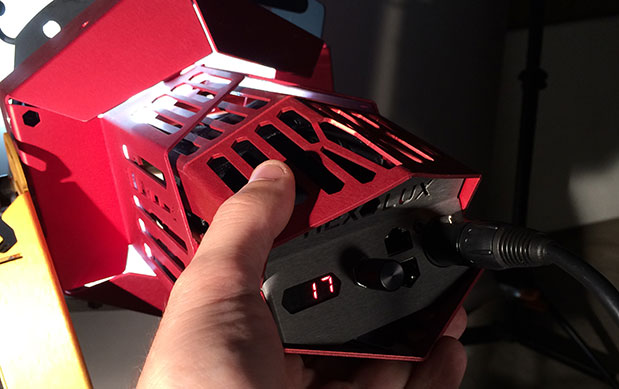 Loosen a knob and you can slide the Illuminator forward and back to focus your beam. A digital readout tells you exactly how much you've dimmed the light. 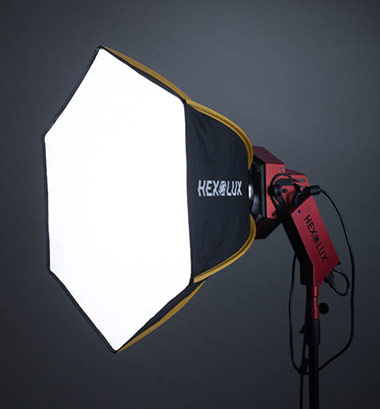 This is your only softbox option, for now. It attaches just like barndoors, but a speed-ring is in the works.

The D7 (and its tungsten cousin, the T7) is an impressive light, able to fill a lot of different roles on a set with no compromises in terms of light quality or control. The only thing that will give you pause is the light’s $2400 price tag. For roughly the same money, you could have four conventional Arri 650 fresnels. You could have one of K5600’s new Joker Bug Evolution fixtures, which are smaller, let you swap out bulbs for either daylight or tungsten, and can work well with softboxes. For a little more money, you could have an Arri LC-7 LED unit, which has about 25% more power than the Hexolux and makes gels obsolete by letting you dial in any color temperature, not to mention other color effects.

These are all compelling alternatives, but of course, they bring their own compromises as well. Arri 650w fresnels hog power, run hot, don’t dim and don’t work with DMX. A Joker Evolution can’t produce nearly as clean and controllable beam as the Hexolux, can’t run on a battery and can’t conveniently dim. And an Arri LC-7 is a much bigger, heavier fixture that will probably require more crew to manage.

So pick your poison. But personally, I like the Hexolux’s unique blend of features. It’s a light that’s very easy to work with, and produces a nice looking beam with good creative control.