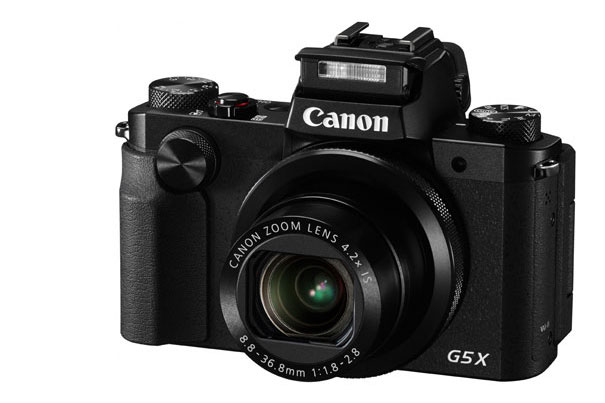 The appearance of the PowerShot G5 X at the Canon store without any sign of a press-release before it being commercially shown is a strange move, especially because this is the first time Canon uses an electronic viewfinder (EVF) in their G series. It’s a departure from the tunnel vision present in previous models, so it deserved to be announced loudly, but Canon seems to think otherwise.

Anyway, here we are with a new compact camera that will, again, divide opinions. Some have already started to say it’s Canon doing their thing, mostly being behind the pack when it comes to innovation, while others praise the specs and the whole thing about the new model. There has to be a way, somewhere in the middle, that explains better why Canon took this path. Of one thing I am sure: this new PowerShot G5 X is a step in the right direction, simply by the implementation of the full-featured 2.36 million dot electronic viewfinder. The fact that it appears associated with a compact does not mean it can not be a step for implementing EVFs on future Canon mirrorless cameras. Time will tell. 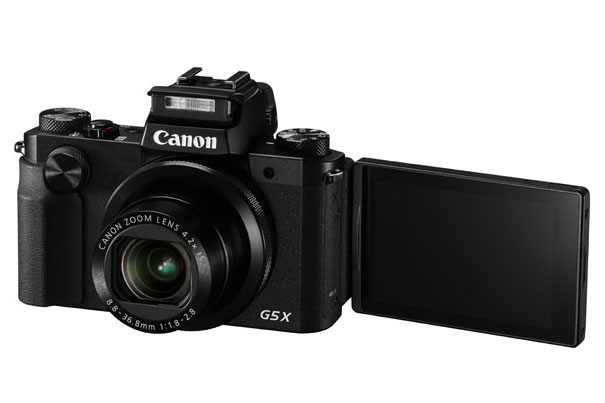 Even Canon, that previously stood by their “tunnel vision” viewfinders, now states in the information available for the PowerShot G5 X that the camera’s viewfinder “makes it simple to compose, set and capture high-quality stills and video without taking your eye away from the camera”. So, after all viewfinders are still needed, even if EVF – which I continue to not appreciate. Viewfinders, after all, also contribute to better stability when holding a camera, simply because you create a kind of “tripod” with your arms and nose, to keep the camera steady.

Canon also agrees that LCDs for composing are, sometimes, not the ideal thing, when they write that “for photography in the glare of bright sunlight, recording HD Video in an auditorium and other situations where the lighting is difficult or using the LCD monitor is inconvenient, the PowerShot G5 X’s electronic viewfinder helps enable unfettered operation”. 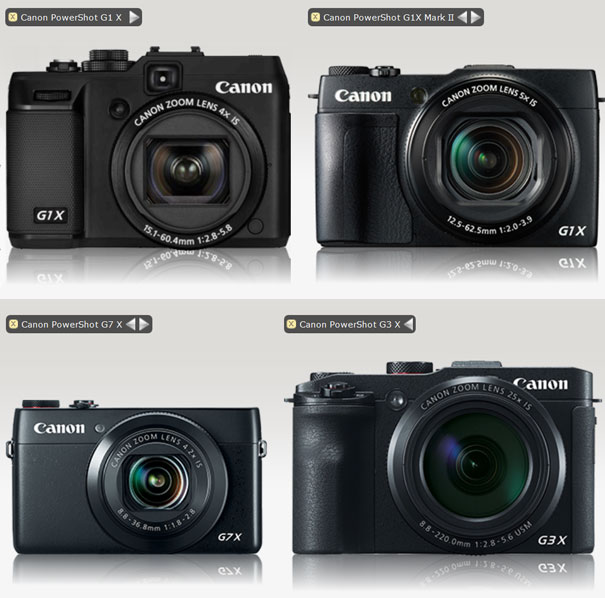 Now, at the heart of the PowerShot G5 X camera is, says Canon, “a brilliant 1.0-inch 20.2 Megapixel High-Sensitivity CMOS sensor. Physically larger than the sensors found in most compact cameras, the PowerShot G5 X’s sensor works in tandem with Canon’s DIGIC 6 Image Processor to quickly deliver gorgeous, high-resolution images with nuanced details, plus impressive low-light performance with a low signal-to-noise ratio and minimal noise and distortion. Suitable for tremendous enlargements, significant cropping and many other applications appealing to the advanced photographer, images and video captured on the PowerShot G5 X’s sensor are engineered to impress even the most critical eye.”

Without much more information about the sensor, one is led to believe it will not be much different from the sensor present in the G3 X. After all, it was launched recently. Anyway, to take advantage of its large, 1.0-inch imaging sensor, the PowerShot G5 X camera has a sharp and versatile 4.2x Optical Zoom lens. With a 35mm equivalent range of 24–100mm it’s equally suitable for landscapes, portraits, group photographs and even close-up photography. Designed to perform in numerous lighting situations, the PowerShot G5 X’s lens has a bright maximum aperture of f/1.8 for low light performance, a 9-blade aperture for beautiful, blurred background detail and is engineered to focus from distances as close as 2.0 in. The PowerShot G5 X’s lens works in concert with the camera’s sensor and image processor to reliably deliver sharp images from edge to edge and from wide-angle to telephoto, all tailored to meet the exacting standards of even critical photographers. 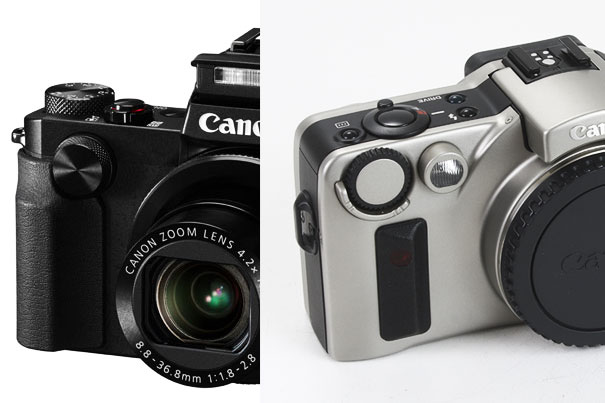 The design of the PowerShot G5 X will also divide opinions. Some will say that this new model was created while Canon’s design department was out for lunch, while other may praise the retro look of some dials and the rectangular look of the camera, which somehow reminds me of Canon’s EOS IX, an APS SLR from 1996 that I always wrote, was made available before it had its left side completely finished. Even the front dial situated on the front of the PowerShot G5 X for operation with the index finger seems to have been taken from the EOS IX… From my perspective, they’re both ugly models.

Design aside, the PowerShot G5 X seems to be conceived to offer full control in a simple way, through the dedicated dials situated around the camera that let you easily customize and control the settings. What’s more, helpful features like a built-in accessory hot shoe and a multi-angle, capacitive touch screen monitor serve to, states Canon, “create an experience as unique as the subject being recorded.”

According to Canon, though, the camera’s defining feature is “its unique, high-definition electronic viewfinder. It’s great for photographers who prefer to hold the camera up to their eye, and is a veritable lifesaver in bright light and when composing on the camera’s LCD screen is inconvenient or overly conspicuous. Featuring 2.36 million dots, and with a wide color gamut, it provides a high-contrast, realistic and smooth edge-to-edge view for image composition, adjustment and review. Designed for sustained use, it delivers 100% image coverage, a smooth refresh rate up to 120 frames-per-second (Smooth Mode) and a flexible information display that can enable comfortable camera operation throughout the day. Its 22mm eyepoint delivers excellent visibility, even when wearing glasses, and a built-in eye sensor helps the PowerShot G5 X to transfer quickly between the viewfinder display and Live View on the camera’s LCD. 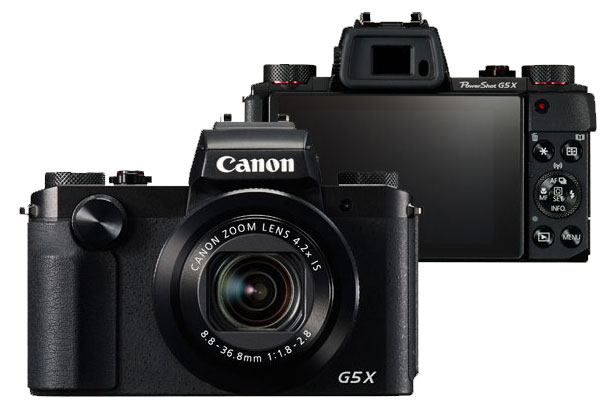 Designed for speedy operation while looking through the viewfinder, the PowerShot G5 X camera features a host of controls for quick, accurate settings and adjustments. Beyond its Vari-angle touch panel LCD monitor, the PowerShot G5 X features a front dial situated on the front of the camera for operation with the index finger, a top-mounted, thumb-operated exposure compensation dial, a rear-mounted control dial plus a control ring around the camera’s lens. Eminently customizable, each dial has an optimized operating torque that helps to identify it by feel, for sustained, intuitive and near-silent operation in quiet situations like weddings and performances.

The PowerShot G5 X camera’s hot shoe enables expanded operations for advanced photography. It’s compatible with all Speedlite flashes for the EOS System, so bounce flash and multiple-flash photography is easy to achieve. Whether attaching a Speedlite flash or the Remote Switch RS-60E3 for long exposures or night scenes, the PowerShot G5 X’s hot shoe can help provide shooting opportunities far beyond the scope of most compact cameras.

With a suggested price of $799.99, the PowerShot G5 X may look simply like a new model in the G lineup of compact cameras with a first, the EVF. But the viewfinder makes it also look like a test field for Canon’s next step into the world of mirrorless cameras. Maybe someone at Canon imagined, already, this type of viewfinder moved to a small DSLR-like body, like the EOS SL-1/100D, to create a mirrorless system offering both an electronic viewfinder and compatibility with Canon’s lenses on a lighter and smaller body, as everybody seems to want. Could be an idea…