The medium that most of us call podcasting has gone way beyond the Pod. When I say that, I am referring to both known etymologies of the term podcast: 1) The first, which refers specifically to Apple’s iPod devices. 2) The second, which states that the letters P-O-D in podcasting are actually an acronym for the words Portable On Demand. Of course, almost everyone knows that the programs which are popularly called podcasts can now be played on computers and multiple portable mobile devices, including iPads, iPods, iPhones, Blackberries and a handful of other portable audio players and other smart mobile telephones. But beyond that, some people are not yet aware that the market is now being flooded with many other devices that can receive and play these “podcast” programs directly, without any computer in the loop, including some HDTV sets, and even an in-dash car radio which connects to the Internet wirelessly. In this article, you’ll discover those, plus Internet table radios and inexpensive set top boxes which tune podcasts directly, without a computer. You’ll also get to reason with me about whether we should still be calling this medium podcasting, and keep calling the programs podcasts… and what this all means, both for content producers and for listeners/viewers.

The Squeezebox Radio from Logitech costs US$199.95 and tunes podcasts without a computer!

The Squeezebox Boom from Logitech costs US$299.95 and tunes podcasts without a computer!

Many HDTV sets now come with “podcast” reception built in.

Some Sony Bravia HDTV sets can tune podcasts without a computer.

Select from TiVo’s suggested podcast list or…. (see next photo, below)

Enter the RSS feed of a desired podcast

Starting at US$79.95, Roku set top boxes receive podcasts via MediaFly, in addition to several other free and premium Internet services.

Popcorn Hour models start at US$179 and receive podcasts via MediaFly, in addition to several other free and premium Internet services. With a built-in Blu-ray player, they start at US$299

At CES 2009, Blaupunkt and miRoamer showed what they called the first Internet car radio. Apparently it is not shipping yet to the general public, but it may already be available as a factory option in certain cars. Some reports say that it connects via Bluetooth to an Internet transceiver, while others indicate that it has built-in 3G. It is not clear whether the first unit is for Internet streaming only, or whether or it will also support RSS subscription. 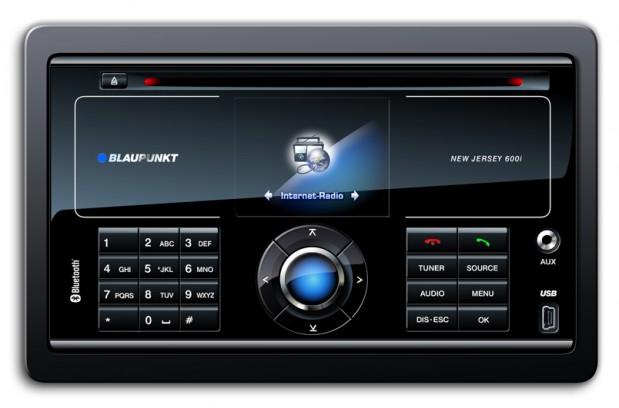 Should we still call the medium “podcasting”, and the programs “podcasts”?

You have just seen a bunch of devices that play “podcasts” that are not from Apple, and -with the exception of the car radio- are not even mobile, so the don’t even qualify under the second etymology of “Portable On Demand”. If Kojak (Telly Savalas) were alive today, he’d take his lollipop out of his mouth and say: “Podcasting, you’ve come a long way baby!”

Popularity-recognition-comprehension-establishment: Linguists and translators like me often use Google usage measurements to determine the popularity of terms. I just checked, and there are currently 92,100,000 uses of the term “podcast”, yet only 419,000 uses of the term “netcast”. I am afraid that there are much fewer non-podcast listeners/viewers who would have a clue what a “netcast” is, compared to the number of those who would grasp what a “podcast” is. Also, many of the devices listed above actually call the medium “podcast” in their menus! We certainly want to confuse our potential listeners/viewers.

What this all means for content creators, listeners, and viewers

Content creators who up until now have only used the conventional AM, FM, VHF, or UHF spectrum will discover that their colleagues who have only distributed their content either as live Internet programs or as subscribable RSS “podcast/netcast” programs now have a much larger market share. We not only have a much larger geographic coverage and a unique repeatability factor (put it pause, listen over and over) and referability factor (tell a friend and s/he can hear/watch the exact episode you did), but we are also reaching listeners/viewers who were previously unable or unwilling to listen to (or watch) our programs via a computer or by subscribing and syncing a mobile device. It also means that all content creators have an exponentially larger number of competing programs. On the other hand, listeners and viewers have an ever growing list of options to consume… so we content creators need to continue to produce increasingly better content, and do an increasingly better job of promoting that content… So let’s do it!

Get a full index of Allan T©pper’s articles and upcoming seminars and webinars at AllanTepper.com. Listen to his radio program TecnoTur, together with Tanya Castañeda, Rub©n Abruña, and Liliana Marín, free via iTunes or at

None of the manufacturers listed above is paying Allan T©pper to write this article, and so far, none has sent him any samples or demonstration items.