Lots of cine glass, all in one place for your viewing pleasure

If you’re into cine lenses, save the date:  on Saturday, May 13 from 10am–5pm, Portland, Oregon’s Koerner Camera Systems is hosting the Pacific Northwest Lens Summit at Koerner’s spacious new rental facility. 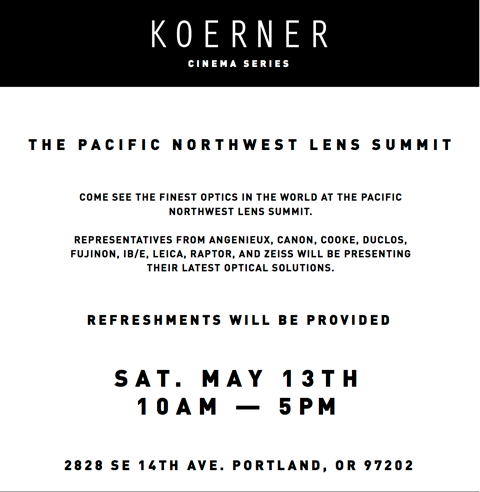 Scheduled halfway between NAB and Cine Gear Expo, the Lens Summit may be better than either of those shows: it’s an all-day event dedicated solely to cine glass, with multiple stations set up for lens testing and evaluation (I spoke to Michael Koerner at NAB, and he confirmed that at least one such setup will have the canonical strings of Christmas lights in the background for bokeh testing. And yes, of course Koerner has a lens projector).

Better than NAB or Cine Gear? Ask yourself: do those events gather all the lenses together and let you see ’em in action, side-by-side? Do those events let you set up a Zeiss alongside a Cooke so you can compare the precise and objective rendering of Zeiss glass to the famed “Cooke Look”? Do those venues let you evaluate affordable zooms from Fujinon and Canon on the same rig, so you can feel how each responds to your touch? Easy answer: no, they do not.

But you will be able to do these things—and more—at the PNW Lens Summit.

Also: refreshments will be provided. You can’t ask for more.

I am trying to avoid a shootout format.  I am more interested in presenting options.
Our projector is there if people want to use it but I am not encouraging it.  I feel the lenses should be looked at through the camera and on a monitor not so much on a projector even though it is a great tool.  People that aren’t well versed on a projector may make decisions which aren’t really valid.  Anamorphics don’t look good on a projector but they do look good on a camera, things like that.

Look at the expected lineup of lenses, as relayed by Michael Koerner just before NAB:

(“VV” is short for VistaVision: these are large-format lenses for the likes of the Millenium DXL, RED Weapon and Weapon VV, Alexa 65, and similar bigger-than-S35mm-sensor cameras. Large format is, if you’ll pardon the expression, the Next Big Thing; here’s a chance to see how VV lenses handle alongside their S35mm counterparts.)

But it’s not just the glass—it’s the people, too:

In all seriousness, if you care about your glass and you’re anywhere within a few hundred miles of the location, this is an event worth visiting Portland for. Fly into PDX and take light rail from the airport to the Lens Summit: the MAX Red Line runs from the PDX terminal to downtown; change for the Orange line and get off at Clinton St / SE 12th Ave, from which it’s a five minute walk to Koerner (yes, TriMet is reworking the tracks downtown—very poor timing on their part; didn’t they know about the Lens Summit?—so trains are less frequent, but the disruption is west of where you’ll be going so there shouldn’t be much hassle involved).

Ask yourself: is there any other US city so civilized, so well-planned, that you can step out of the airport terminal building and onto light rail, and be swiftly conveyed to a cine rental house? Easy answer: no, there is not.

It is going to be freaking awesome. See you there.

Disclosure: There is no material relationship between me and Koerner, any of the lens vendors mentioned, TriMet, PDX, the City of Portland, Cruzroom, or the Lovecraft bar. None of these entities offered compensation or blandishments of any kind, including artisanal tacos, for a shout-out. The Koerner folks have supported me when I’ve done lens and chart testing, for which I’m duly grateful, but I’d write about this event even if they were nasty and unhelpful people, which they are definitely not.

Disclaimer: it often rains in Portland. If you get wet, don’t say I didn’t warn you.

Distinction: Don’t confuse the Portland Lovecraft bar with those in NYC, Arkham, or R’lyeh. Totally different places. This one offers vegan bar food—you won’t find that in R’lyeh.