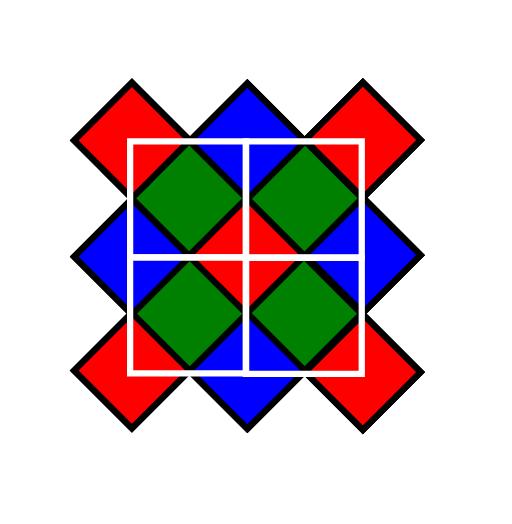 Quick: If a 21 megapixel HDSLR records a 1080p image, how many pixels are there? Hint: It’s a trick question. As DPs alternate between single-sensor cameras and three-chip cameras, there’s a huge potential for confusing pixels, the microscopic rectangles of silicon on the image sensor and pixels, the digital samples that get recorded. There may be six times as many of the first as there are of the second. Or the numbers may be the same. Calling both of these pixels tends to paper over these differences. It also thwarts communication when someone means one thing but the listener hears the other. For the sake of clarity, if not sanity, I’m learning to call the little image sensor rectangles photosites.

A terrific explanation for preferring photosites is given by Larry Thorpe of Canon Broadcast & Communications Division, under the somewhat lengthy title of Demystifying Digital Camera Specifications, Part 1, What’s in a Pixel? Mr. Thorpe joined with John Galt of Panavision on this series of video presentations and if you’re interested enough to be reading this article, you probably should check out these videos.

Of course, there are times when the image sensor photosites and the recorded digital pixels are completely in sync. For example, there’s a big population of three-chip camcorders with 1920 x 1080 image sensors that record 1920 x 1080 HD. Since I am The Sony Tech Guy, I naturally think of the SRW-9000, PDW-F800 and PMW-350 camcorders. In these cases, everything is clear because the count of photosites equals the count of pixels, right?

Sort of. Each pixel is actually represented by three photosites, one each for Red, Green and Blue. So the arithmetic is 1920 x 1080 x 3 or 6.2 million photosites. If you’re more a picture person than a numbers person, you can visualize it as follows.

We can say that this configuration has 100% RGB resolution, relative to the 1920 x 1080 HD raster. That is to say, the Red, Green and Blue channels have full horizontal and vertical resolution-at least in the camera. Not all of this goodness is captured by all recorders, but that’s a subject for another article.

Sony is also active in single-chip cameras, from the HXR-MC50U on up. At the high end, we developed the Super 35mm CCD featured in the F35 digital cinema camera and more recently the SRW-9000PL Super 35mm camcorder. The sensor uses an RGB stripe filter and double oversampling in the vertical dimension. Now the arithmetic is 1920 x 1080 x 3 x 2 or 12.4 million photosites. This design also retains 100% RGB resolution, relative to 1080p HD.

Both of the sensor configurations considered so far deliver a 1080p HD picture. What about 4K?

The answer, my friends, is on Page 2.

If we imagine a Bayer pattern 4K sensor, it could have 4096 x 2160, or 8.8 million photosites. In our three-chip camera, we had a 3:1 ratio of photosites to recorded pixels. In our RGB stripe camera, we had 6:1. But in the Bayer sensor, we have only a 1:1 ratio. Instead of drawing information from Red, Green and Blue photosites, each recorded pixel is supported by just one photosite, Red, Green or Blue. We can only try to fill in the missing information through interpolation during de-Bayering. But interpolation cannot create information that does not exist. Where the previous designs achieve 100% RGB resolution, relative to the 1080p raster, this sensor achieves 33% RGB resolution-relative to the much bigger 4K raster. Again, to be clear, the comparison is 100% of a smaller raster versus 33% of a bigger one. It’s truly apples and oranges, but it sets the stage for what’s to come.

Sony makes image sensors. Why not simply go back to the drawing board and create a 4K sensor with the same RGB stripe pattern as featured in the SRW-9000PL? Because this would require photosites with just 1/6 the area of 4K Bayer photosites. And nothing comes without a price. There’s an ongoing tradeoff between size and quality. Holding all other things equal, smaller photosites buy you higher resolution, but only at the expense of reduced sensitivity in low light, reduced signal-to-noise ratio and greater concerns about diffraction-limited resolution at small lens apertures.

As Adam Wilt has reported, Sony is exploring a new sensor design that approaches full RGB resolution for 4K images. Over the decades, Sony has developed generation after generation of image sensors with improved optical efficiency and increased quantum efficiency. This has enabled the company to produce ever smaller photosites with ever higher performance.

And so it was that Sony’s Hugo Gaggioni and Yasuhiko Mikami revealed a new sensor concept at the HPA Retreat this past February. We believe it strikes the best balance of photosite size and pixel performance in 4K. We took the idea of the 4K Bayer sensor and cut the photosite area in half. Then we rotated the grid by 45 degrees. While the photosites are smaller and diamond shaped, the pixels retain the same size and orientation. (The pixels appear as white outlines in the illustration above.) Each pixel draws information from five photosites. There’s the Green site smack dab in the middle, plus the two adjacent Reds and Blues, one quarter of which falls within the pixel’s area. While this does require some processing, it does not involve the guesswork and interpolation of a de-Bayer.

The result is a quincunx or checkerboard pattern that doubles the RGB resolution from 33% to 67% of the full 4K raster. We call this technology Q67. We expect that it will deliver an excellent balance of low-light performance, high signal-to-noise ratio, strong resistance to diffraction and resolution that will redefine the state of the art.

Just don’t ask me when.