If you’ve been a professional photographer for any length of time, your clients have probably asked this. Especially after paying you a lot of money for what you make look easy. 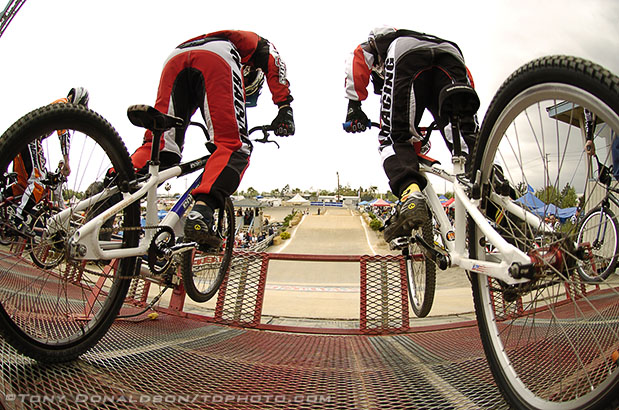 If you’re good at what you do, you make it look easy. I’ve been shooting for 20+ years, and have gotten really good at creating good images even with extreme time crunches, and sometimes tight budgets, too. But it leads to clients, and especially their accounting departments, thinking they might be paying you too much.

One of the most obvious cases for me was a company that hired me several times a month to shoot their riders. I charged them a fair rate for the day and the use and it was a happy relationship for a couple of years.

Things started getting tighter, and someone mentioned to me that I was paid “awfully well” for going out and shooting for an hour or two. I asked if they were happy with the images, and of course they were. I explained that if I was shooting, for example, a dirt jumper doing one of his best jumps, and knew I had it to the satisfaction of the rider and myself, there was no need to keep shooting. These guys do insanely difficult jumps and always brought their best/newest/hardest/craziest tricks for their ad shoots. If I had them keep riding more than necessary, because these tricks were the cutting edge, the likelyhood of them getting hurt goes up exponentially. And if they’re hurt, they can’t compete, and this sponsor doesn’t get what they pay the rider for.

That assuaged their argument for a while, but as things at the company got tighter, they were looking for ways to cut costs. That included what they were paying me. One of the graphic designers, who always came out to the shoots, started asking questions about my gear. I knew where it was going, but offered him the best suggestions for gear. The company bought the same camera, lens, lighting, etc. that I had. And the designer brought it out to the next shoot.

I let him stand next to me, shoot what I shot basically, and even told him the optimal settings for the camera. So for the day he shadowed me and shot alongside me. He went back to the shop, and a few days later I sent in my selects (slides, this was a few years ago). His film was never used and that camera never left the shop again. It took them spending a few thousand extra to discover that a good photographer isn’t just a trained monkey with expensive toys.

It reinforced to me to have confidence in my work and to follow my vision. You should, too. You became a photographer because you had to. You couldn’t picture yourself doing anything else. I LOVE my work, and even though it is sometimes not what I love shooting, I still put that kind of passion into it, and am grateful that I can. 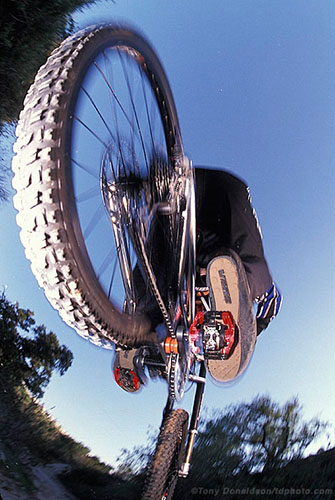 I had my head wedged between two rocks, an assistant with a softbox on one side, and a fisheye lens. Then I had Pistol Pete Loncarevich, champion professional downhill mountain bike racer, jump less than 6 inches over my lens about 25 times to make this shot. No matter how much money I’m being paid, I wouldn’t do a shot this risky with anything but this calibre of rider.

Here’s a story attributed to Pablo Picasso that sums it up well:

Picasso was sitting at a table outside a Paris cafe. A woman came up to him and asked him to draw a portrait of her. She said she’d pay him whatever it was worth. He complied, and in three minutes, voíla!, an original Picasso.

After he quickly finished he requested the French equivalent of $5,000. Agast the woman said – “but it only took you 2 minutes!”

Smiling, the great man replied – “no Madam, it took me my whole life.”