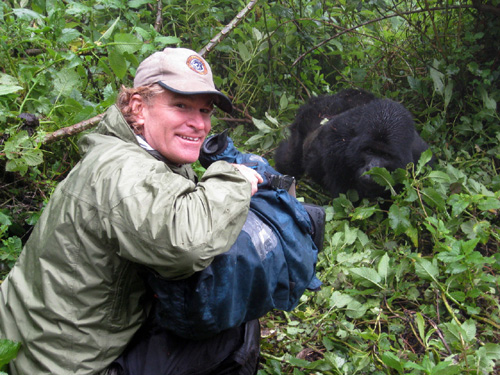 Thanks to help from Petrol’s rain covers protecting his camera and lenses, Idaho-based wildlife cinematographer Bob Poole was able to get up close and personal with gorillas in their native environment for National Geographic’s Explorer episode “Gorilla Murders”. The stunning footage helped catch the eye of the Emmy judges, resulting in four Emmy nominations.

While principal shooter Erin Harvey concentrated on the events surrounding the execution-style murder of six mountain gorillas in Virunga National Park, Poole shot extreme details of the gorillas (eyes, fingers, etc.), so that the editors could cut back and forth between the story of corruption and greed and the gorillas. “Rain was a big issue,” Poole explains. “But I never worried about my trusty Sony F900 camera or Fujinon 16.5x25mm lens and image stabilizer. I simply put them under my favorite piece of gear, a Petrol rain cover.

“Petrol has saved me so many times,” he explains. “Since I discovered their products, I don’t put my camera in a case. I put it on a saddlebag and cover it with a rain cover. The camera always stays clean and running, even during the continuous rain that I had to contend with while I got in close to show the gorillas and how they really are so much like us.”

The careful intercutting of the shocking story of corruption and how Virunga has become one of the most dangerous places on earth, and the very personal images of these helpless mountain gorillas, made such a powerful National Geographic episode that it has been nominated in four News and Documentary categories: Outstanding Individual Achievement in a Craft: Cinematography, Outstanding Individual Achievement in a Craft: Editing, Outstanding Investigative Journalism-Long Form, and Best Documentary.