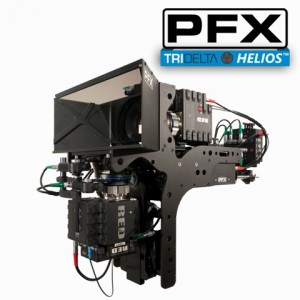 HELIOS harnesses Paradise FX’s 20 years of expertise in 3D camera system design, and delivers a leading-edge, 3D capture system suitable for all types of untethered camera work, including handheld, Steadicam and studio applications, with optimized metadata handling, crucial to VFX-oriented 3D production. When provided as part of a production service package from Paradise FX, HELIOS reduces the technological and crewing footprints of 3D stereo cinematography, bringing them into line with 2D production practices.

HELIOS is manufactured from rigid, lightweight magnesium and aluminium alloy. It is currently designed for use with RED EPIC cameras, with future support for ARRI® Alexa M and Sony F3 cameras. It is offered with a range of matched lens pairs, including ARRI® Ultra Primes and Angenieux® Compact Zooms.

Paradise FX has designed HELIOS to meet the requirements of all key departments on a 3D stereo production – the camera team, producers and directors, and editorial/VFX. HELIOS builds on, and is complementary to, Paradise FX’s existing range of 3D stereo rigs, including the Atlas and Maxi studio rigs, and the Tridelta and Triton Underwater rigs.

As HELIOS is lightweight, self-contained and untethered, Steadicam operators can move as freely as they do on a 2D shoot. Its self-balancing design means that interaxial convergence controls move out from the center of the rig, preventing a weight shift from affecting the Steadicam operator’s performance.

For cinematographers, a unique design advantage of HELIOS is its ability to quickly adapt from one camera configuration to another, between tripod, dolly or crane, to handheld or inverted shooting modes, saving time and money. When HELIOS is provided as a package from Paradise FX, the labor footprint emulates 2D camera positions, resulting in faster set-ups for the director, and significantly reducing the financial burden for producers.

To boost post production workflow, HELIOS can be deployed with Paradise FX’s Mercury™ metadata capture system. Files, timecodes, associated lens and 3D stereo information, such as interaxial and convergence metadata, can be offloaded for post or VFX. In addition, camera moves can be played back on-set in the same way as a motion control system. To support even more efficient post-production workflow, Paradise FX also provides an on-location Digital Lab facility for fast dailies review, archiving and post adjustment of 3D footage.

Outfitted with RED Epic cameras, HELIOS provides the smallest package for a 35mm chip, and unsurpassed quality and firepower allowing up to 96fps at 5K and 300fps at 2K.

Cinematographer Sam McCurdy BSC commented: “With HELIOS, Paradise FX has developed a system that gives me the ability to easily jump from Steadicam to crane to dolly with one rig. Its rigid, stable build has given me more freedom than ever when shooting 3D stereo. I don’t know of any other rig that performs as well as HELIOS in the constantly demanding environment we shoot in today.”

Steadicam operator Chris McGuire said: “Paradise FX’s new HELIOS 3D rig is a welcome relief for Steadicam. Its handling is great because of its dynamically self-balancing design and its ergonomics – everything is easily accessible and positioned properly for the operator. Weighing just 42lbs, it’s a complete 3D shooting rig that is physically tuneable to the endurance of the operator.”

Producer Charlotte Huggins commented: “I had the pleasure of working with the Paradise FX crew and their new HELIOS Steadicam rig on a recent project. I was amazed at how easily it moved, wirelessly, and covered the scenes in very dynamic ways. It worked perfectly, seamlessly. We got all the shots my DP and team were hoping to get, and more. It really was as if I were shooting a 2D show with the HELIOS.”