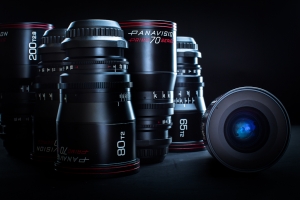 Panavision, the company behind the world’s best cinema lenses for 60 years, is showcasing their new line of Primo 70 lenses optimized to work with today’s larger sensor digital cameras. The lenses are being exhibited here at the 22nd edition of the Camerimage International Film Festival, a premier event for directors of photography.

“Panavision Primo lenses have set the standard for excellence in motion picture production for 25 years,” says Kim Snyder, Panavision’s president and CEO. “Now, filmmakers can combine that essential Primo character with the larger sensors found in the latest digital cameras.”

Panavision Primo 70s are the most advanced cinema lenses ever developed, and specifically designed to work with today’s larger sensors. The result is more consistency from edge to edge and sharper corners. The organic flavor, pleasing bokeh, and gradual focus roll-off that DPs depend on have been carefully maintained in the Primo 70 series.

Primo 70 lenses have already been tested in the field under real-world production scenarios, including two feature films and several commercials.

“The 70mm Primos are beautiful – just amazing,” says Peter Menzies Jr., ACS about his experience using them on a feature film. “I have never seen lenses that hold their sharpness and contrast across the entire frame. … They are also light, fast and the lens sizes in the kit are perfect. The two zooms we used are excellent — incredibly close to the primes.”

“The Panavision 70mm lenses have a grand look,” notes Greig Fraser, ASC, ACS who relied on the Primo 70s for a commercial shoot. “Their visual language is significantly different than 35mm. The focus falls off quickly and beautifully. As a cinematographer, this allows me to tell a different story. … For decades, Panavision has given filmmakers exciting new tools that can open up our imagination. These lenses promise really outstanding new possibilities.”

Panavision’s Dan Sasaki, VP of Optical Engineering, adds, “The cinematographers who have used these lenses reported that they were very happy that we didn’t create something that is synthetic or too scientifically sharp. Cinematographers tell us that the character of the lens is even more important with digital cinematography. We maintained the artistry, and preserved the dimensionality that was originally designed for the Primos back in the 1990s. The Primo 70 lenses definitely share the Primo family resemblance.”

Panavision Primo 70 lenses are the product of state-of-the-art design and manufacturing techniques and materials, and they incorporate feedback from industry pros. Primo 70 lenses are not compatible with film cameras, as they are specifically designed to work with digital cameras. The internal mechanics retain a familiar Primo feel. Floating internal elements control breathing and allow the lens to maintain extremely high performance from infinity to close focus.

Currently, Panavision has made Primo 70 mounts for the Sony F55, RED DRAGON, ARRI Alexa (standard and Open Gate), Phantom Flex4K and Phantom 65, with other cameras being assessed for compatibility.

“Panavision’s unparalleled experience in optical design and lens construction, and our deep and longstanding relationships with filmmakers, have all been brought to bear on these superlative lenses,” adds Snyder. “Filmmakers have expressed a need for lenses that work with larger sensors in an array of cameras. We’re focused on providing the tools cinematographers need to tell their stories and express their creativity.”

The Primo 70 series of lenses are available to rent from Panavision worldwide.


About Panavision
Panavision Inc. is a leading designer and manufacturer of high-precision camera systems, including both film and digital cameras, and lenses and accessories for the motion picture and television industries. Renowned for its world-wide service and support, Panavision systems are rented through its domestic and internationally owned and operated facilities and distributor network. Panavision also supplies lighting, grip and crane equipment for use by motion picture and television productions.