A Near Broadcast News Ready 1080HD Camera By Panasonic

Panasonic continues to deliver what Broadcasters are looking for with the single-lens AJ-PX230 camera. Simple, easy to use by a layman/laywoman feels like the theme of the AJ-PX230. For a 1080HD only camera, the AJ-PX230 has a lot going for it. For example, many broadcasters may find this camera already fits into their current workflow.

If I were to list one thing about the AJ-PX230 which blew me away I would have to say the lens. This single-lens camera does not feel limiting in its throw. Not. At. All. It’s like someone put a built-in x2 adapter straight into the camera. Of course, they did not. This is not a standard ENG camera and lens combo. The astounding fact is the lens throw on the Panasonic AJ-PX230 is a 22x which equals 28 to 616mm when comparing to a 35mm equivalent. Yes, 28mm to 616mm. I’m not kidding. 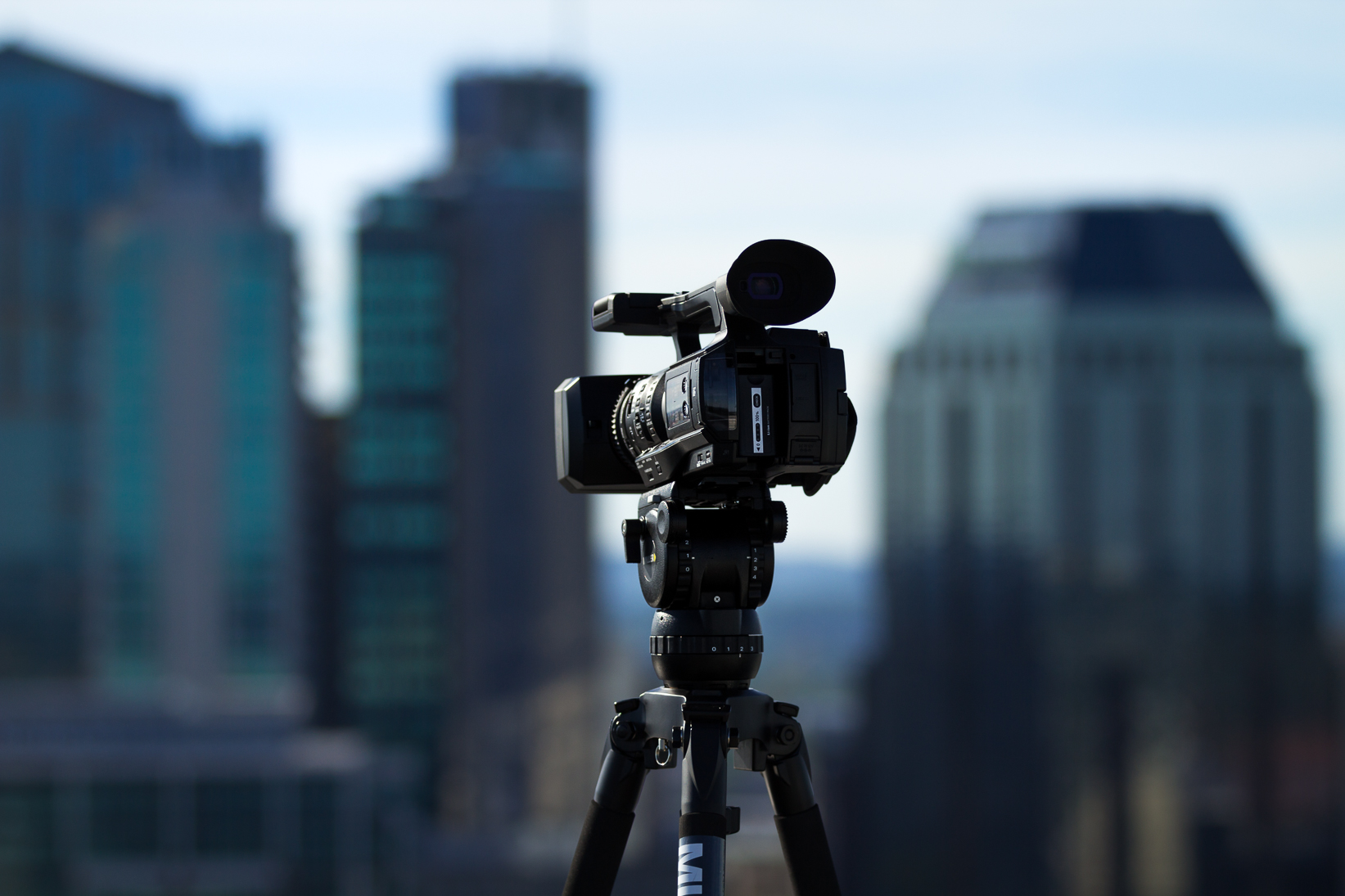 As a former television news photographer having a camera with an incredibly long lens is damn helpful in spot news/breaking news situations. I am talking about situations where a cameraman/woman needs to just grab the shot. Nothing pretty, just document the moment as it happens. With the AJ-PX230, a shooter can feel confident when police try to keep he/she away from the action will not translate to keeping them from capturing the story. In the video above I tried my best to show how far the AJ-PX230 lens can go.

Once I learned the basic in’s and out’s of the camera I searched to find the best place to show off the camera’s incredible zoom range. Luckily for me, I had a shoot on top of Nashville’s Omni Hotel. The crew there were easy to work with and the building has one of best views of Nashville. I brought four cameras to the roof that day: a DSLR for a sunset to night time-lapse, a 4.6K URSA Mini for 4K raw footage needed for a commercial, an OSMO for fun, and the AJ-PX230. I used the AJ-PX230 as a warm-up camera because I was going to be on top of the building for four or five hours. I wanted the AJ-PX230 to help me find the shots I was going to take when I shot the sunset view in 4K raw. A good practice I found when tasked to capture a fleeting moment is to have an easy to use a camera on-hand helping you to find what you want to shoot later. This can save you time and grief later. 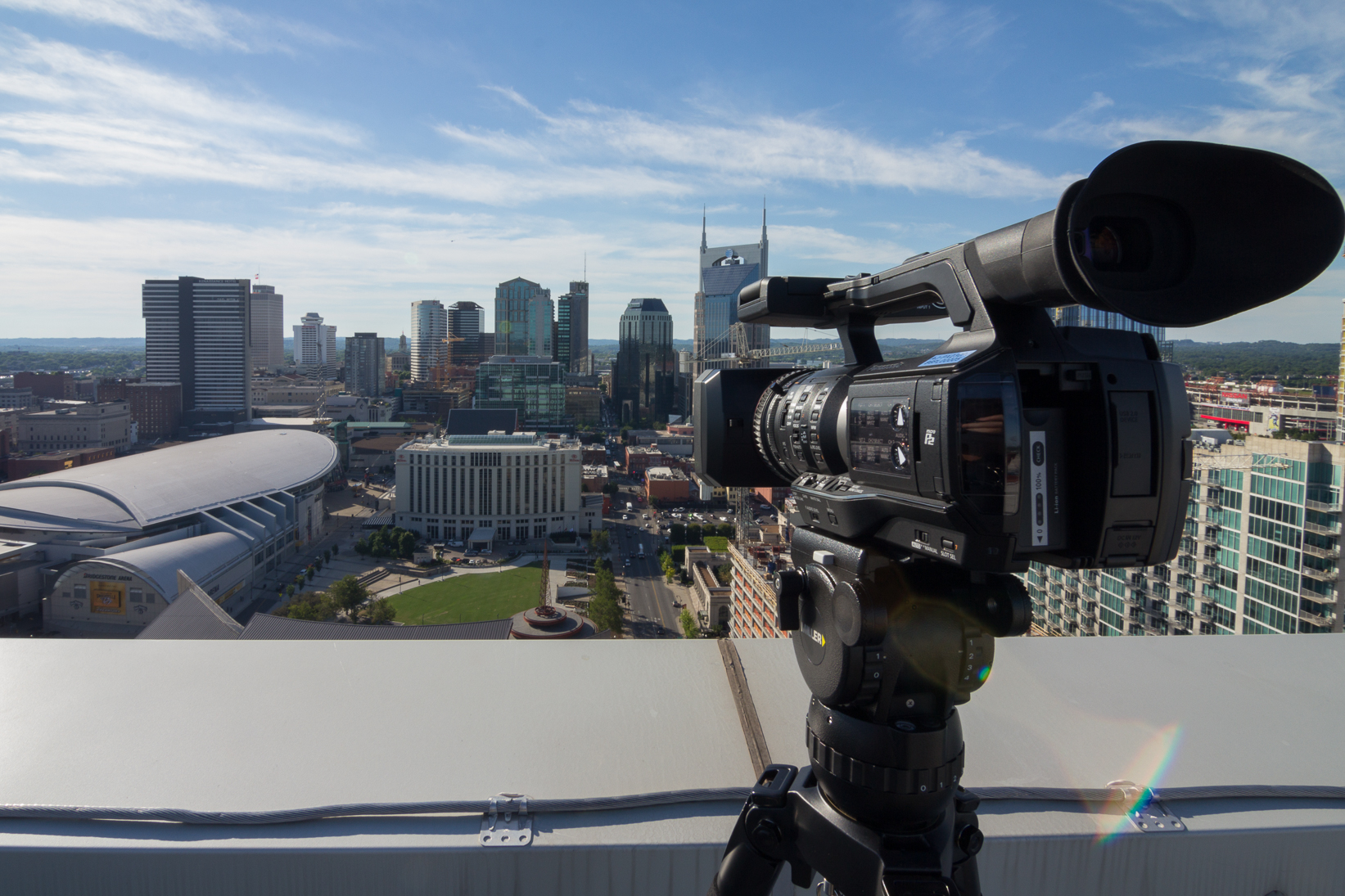 This is where the AJ-PX230 looks like it was planned to work in already established newsrooms in TV stations around the country. First, Panasonic and Sony are the two most dominate camera systems used in newsrooms today. Both systems have their pluses and minuses. With either of these systems, all one needs to do is mix in a little Avid Newscutter server systems and you have an end to end workflow. Panasonic’s AVC codecs work right in Avid and their airspeed servers.

To make sure your on-air product looks as good as the original scene shot you have up to 200Mbps with Panasonic’s AVC-Intra200. This is the top of the heap when it comes to codecs in the AJ-PX230. You get 10bit 4:2:2 files up to 1080 59.94i. Not too shabby for a little single-lens camcorder if you ask me. You will also find a couple little less weighty but still good codecs like AVC-Intra100, and AVC-Intra50. If you need more recording time than the Intra codecs or need to transfer over wifi, you can choose the even less beefy AVC-Long codecs: AVC-LongG50, AVC-LongG25, and AVC-LongG12. If you have not figured it out yet Panasonic’s codecs and their Mbps match up. For example, AVC-Intra200 equals 200 Mbps and AVC-LongG12 equals 12Mbps 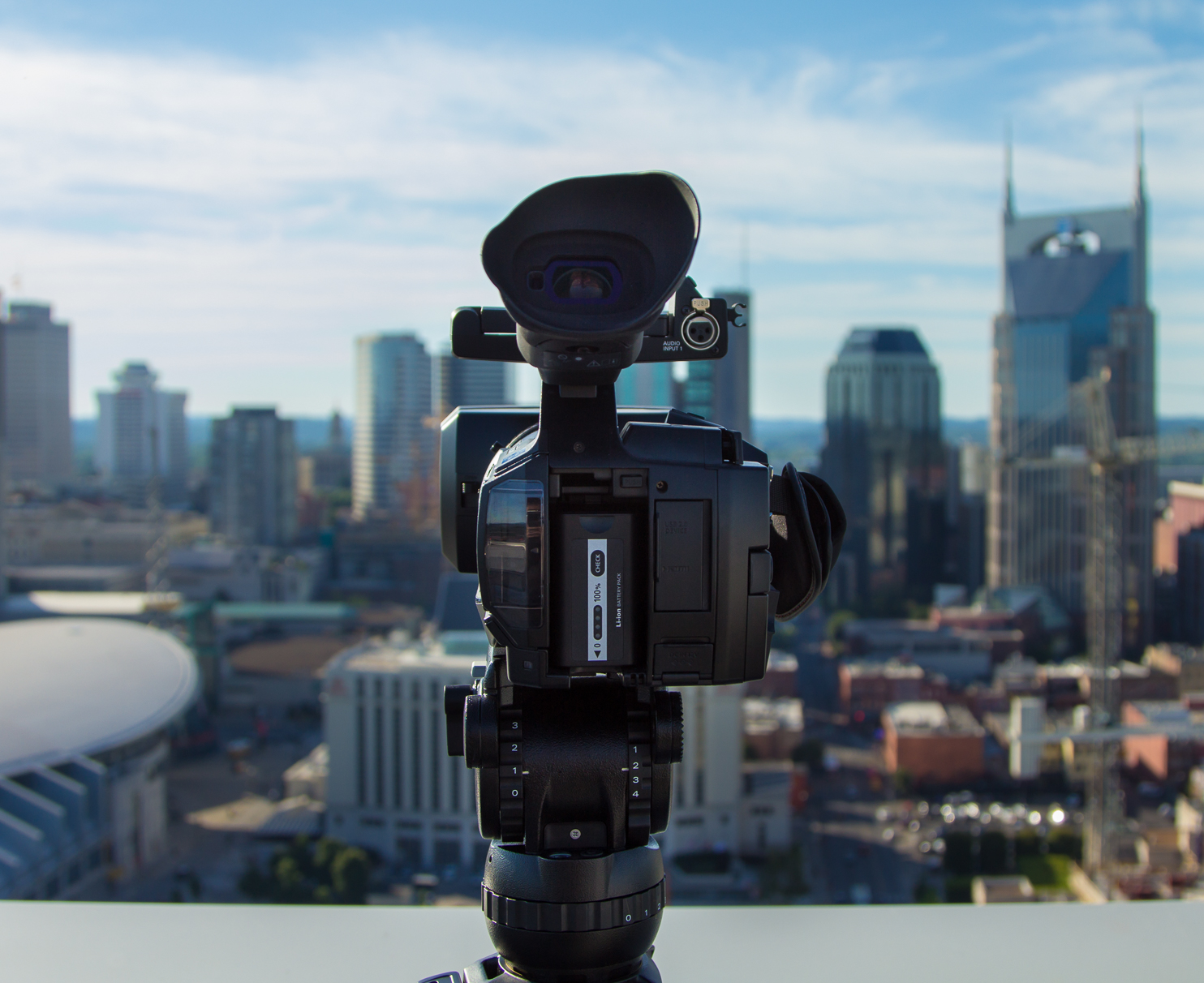 Are there better cameras taking better pictures out in the wild? Absolutely. Even Panasonic makes more than a few better cameras. This camera is a 1/3 sized sensor camera. It will make great broadcast footage, but high cinema look? It might be better to choose a different system. I do not mean to knock the AJ-PX230. I only mean to manage expectations from shooters who might find this camera in their hands. Know what a camera like this can do best and build your visuals around its benefits.

So what are the benefits of a 1/3 inch sized sensor camera capable of capturing 1080HD at 200Mbps on an incredibly wide and long lens? Anything where a deep focus is desired. When I took out the camera to test I focused on Cityscapes and Landscapes. Both can benefit from a camera capable of deep focus.

News organizations could, and will, make great use of the AJ-PX230. The deep focus and easy of use are often exactly what news producer/shooters need when working the varied scenes they may face in a single day. Having a camera needing barely any accessories makes life easier for sure. All this camera needs to be newsroom ready is a top light and a wireless mic. When the camera is also light-weight and already works with your NLE server system, well, the decision becomes pretty easy.

As I shot, I found the lens gave the sharpest performance when shooting on the wide side of the lens. At least, that was the implied feeling I had at the time. When you realize you are shooting at, or near, 616mm (a 35mm equivalent) suddenly you remember atmosphere and haze can make your long-lens images look less than ideal. When I looked at my long-lens footage I figured the lack of contrast and sharpness had less to do with the lens performing poorly and more to do with Nashville’s summer humidity and air pollution.

When it came to Gamma Curves I did what I do to all cameras when I shoot with them. I find the curve with the apparent highest dynamic range and stay with it. I cannot remember which gamma curve it was exactly, but I am mostly sure it was FILMLIKE 1, 2, or 3. Like 90% sure. In these settings, I found you could pull the highlights down when color correcting. This was not like shooting raw or a high dynamic range log profile, but I am guessing this was as close as one could find without necessarily needing deep color correction in the edit. The Gamma Curve choices on the AJ-PX230 are HD, SD, FILMLIKE 1, FILMLIKE 2, FILMLIKE 3, FILM-REC, VIDEO-REC. If I was shooting for a news department I might be more inclined to shoot a straight HD gamma curve because those deadlines come quickly. Some days in broadcast news barely allow a long edit let alone time to tweak the color of each shot to be aired. An engineer has the option to matrix the AJ-PX230 as well to fine tune the color on each camera. 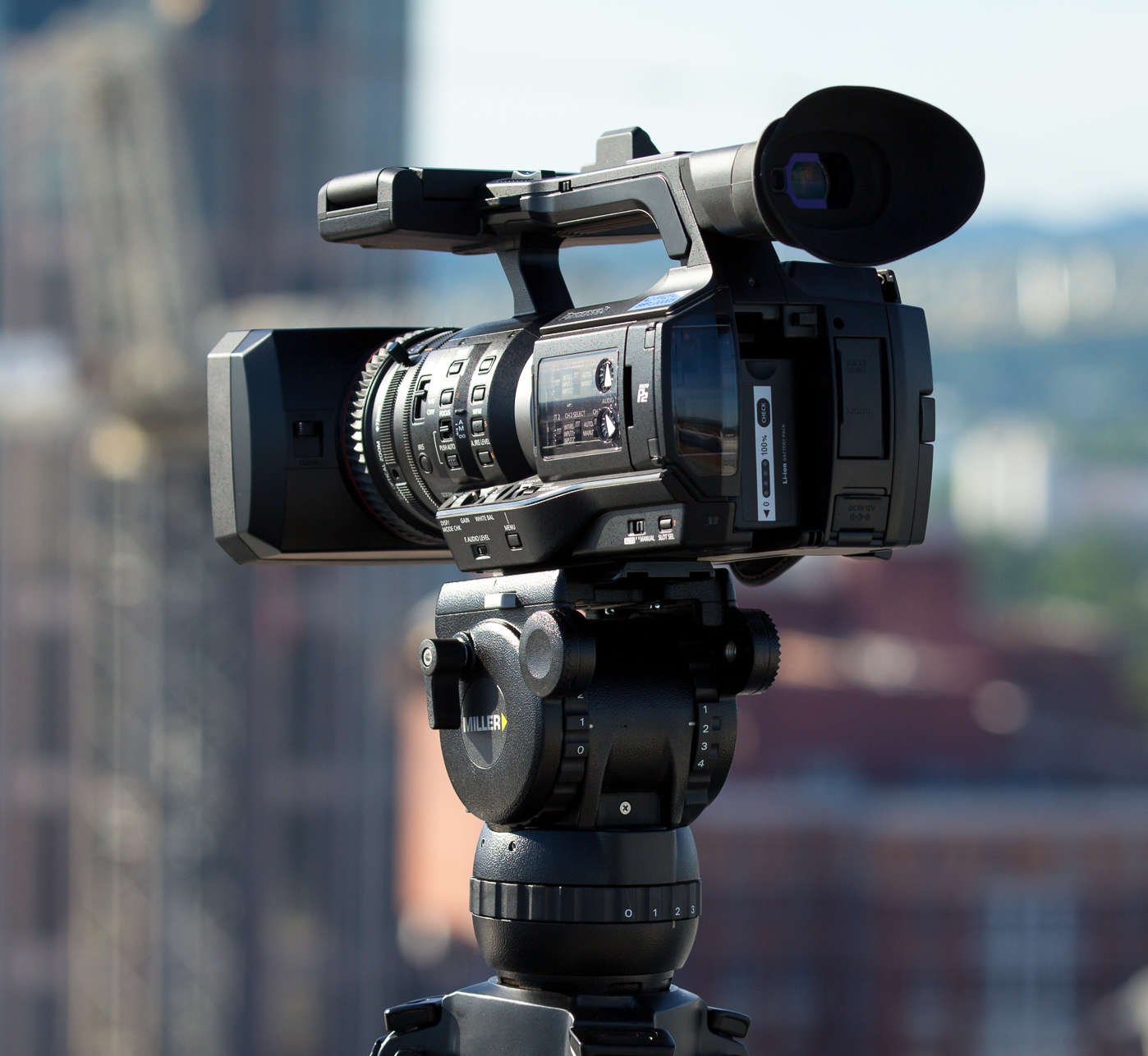 I expected all my long-lens footage from my Omni hotel roof shoot to have some sort of wind shake. In the edit bay, I was surprised to see very little camera shake at all. To say the least, I was impressed immediately. To find a camera with a 22x zoom and a good optical stabilizer means a shooter can feel comfortable capturing a scene from quite a distance away while leaving his/her hands off the tripod or camera to help eliminate as much bounce as possible. Think news cameraman/woman discipline by first compose, focus, record, hands off for ten seconds, stop record, and then find your next shot. The optical stabilizer should take care of any wind bounce throughout this process.

This camera has card slots which suggest the ability to use SD, SDHC, or SDXC cards. The reality is these two card slots will only work with Panasonic’s microP2 cards. Trust me, I tried to use an SDXC card. It did not work. This is one of the things I liked least about the AJ-PX230. It is simple really, a 32Gb MicroP2 card costs around $128 whereas a 128Gb SDXC card falls around half the cost or $64. What makes zero sense to me is being forced to buy a much more expensive microP2 card for the AJ-PX230 when I shot and recorded 4K content onto an SDXC card on a different Panasonic camera. I think it may be in Panasonic’s best interest to listen to the consumer here and make it easier for shooters to use the media they desire.

In the end, the AJ-PX230 looks to be built for broadcasters or new stations. In those place, they will make great use of the camera’s pluses and feel confident it will fit within their existing workflow. There the AJ-PX230 will succeed. Will the camera find a home in the freelance world? Where there are more cameras equipped with more diverse features and falling near the same price-point. Like the Panasonic 4K AG-DV200, which is only $200 more expensive than the AJ-PX230 and gives a shooter way more creative choices, but it is missing those AVC-Intra codecs. Those AVC-Intra codecs are exactly what a news station needs to go from a quick and easy edit to on-air broadcasting. Will those more featured cameras have a lens like the AJ-PX230 though? Again, 22x zoom. It needs to be experienced first hand and was brilliant on Panasonic’s part to put in what will be a good broadcaster’a camera. 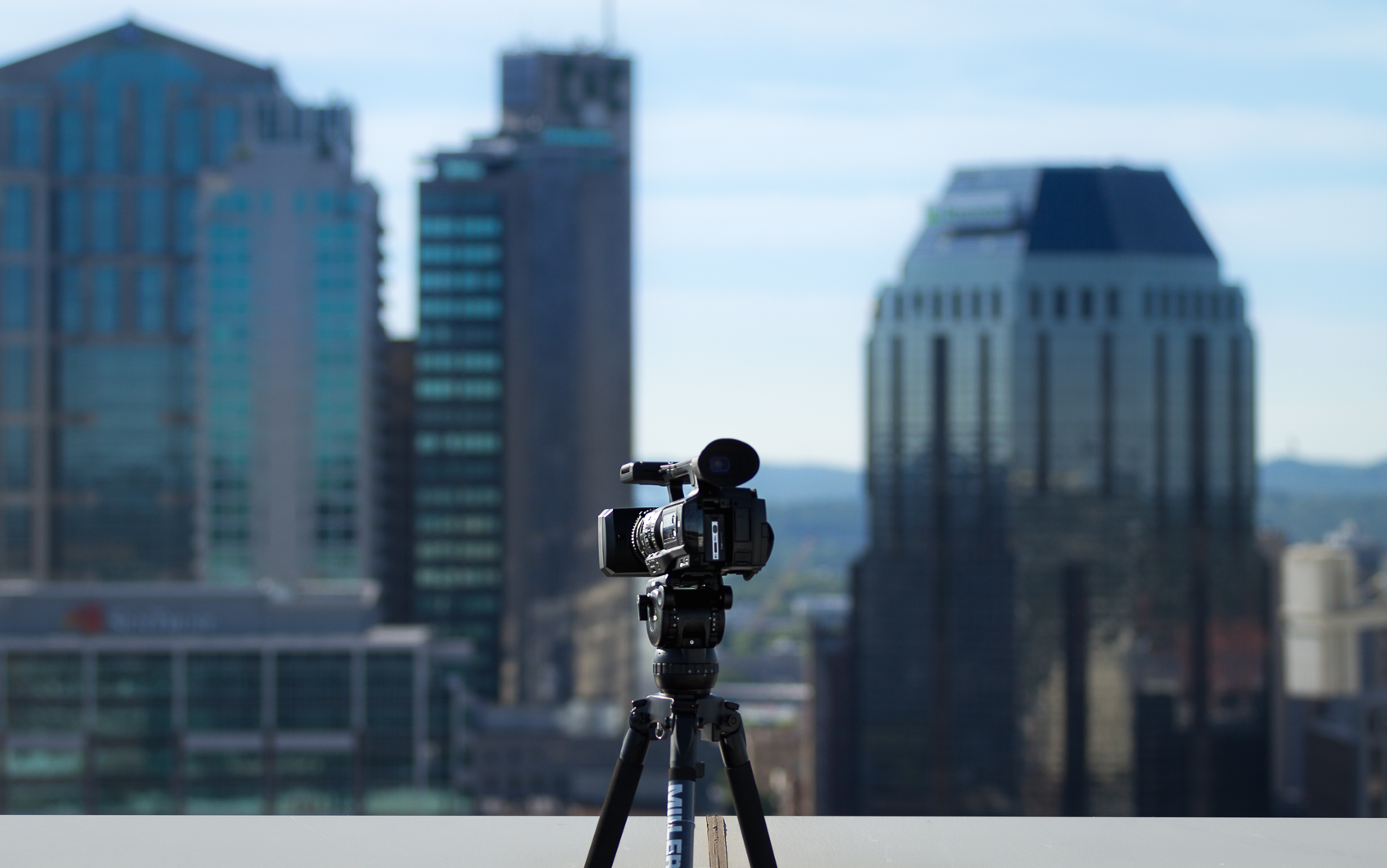