The $60 Oyen Digital LYNC SSD cradle allows you to record to standard 2.5” SATA SSDs via USB-C with any compatible camera, such as the Pocket 6K I used in my tests. 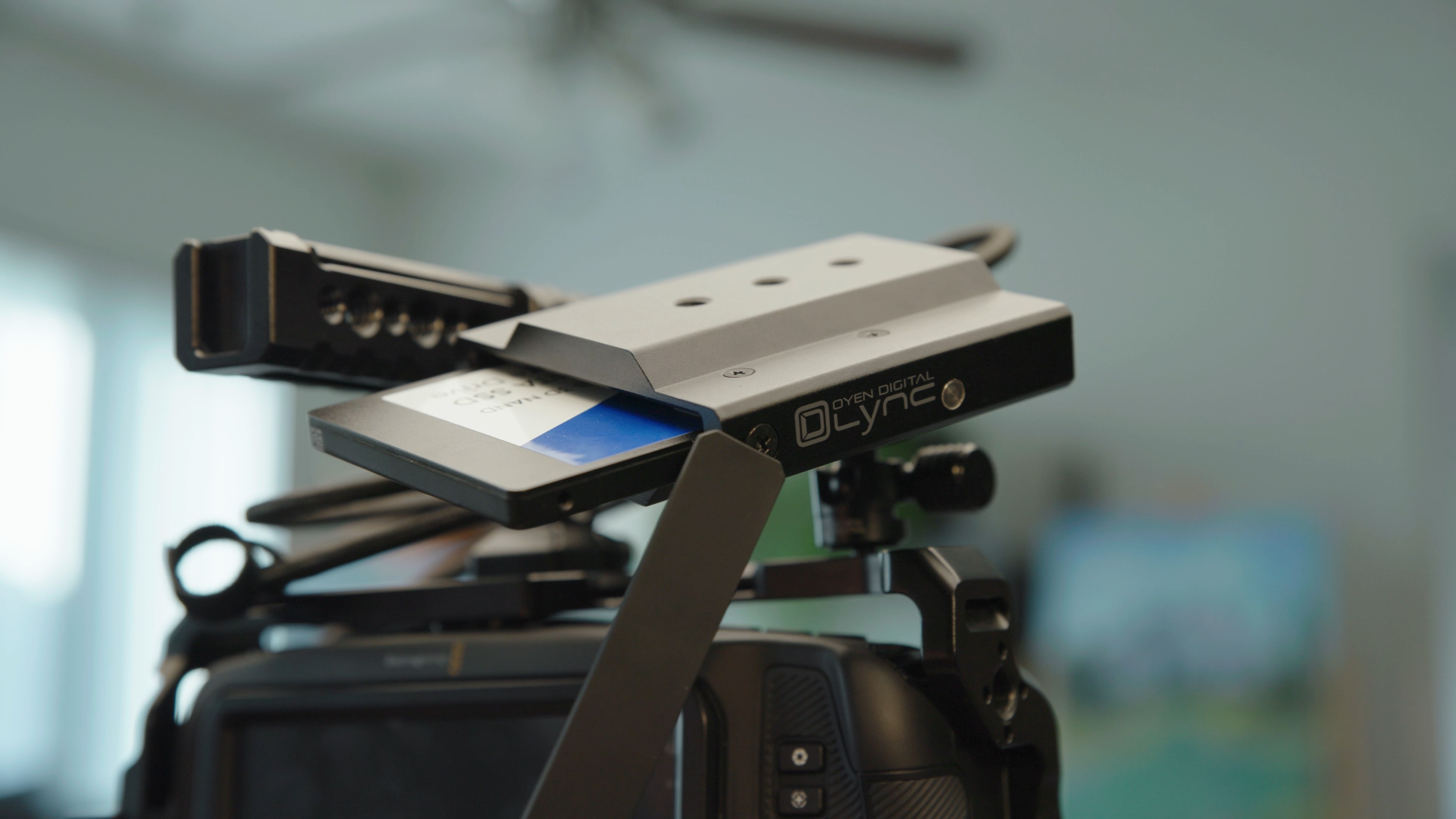 First off: how do you use it? Simply put, you plug it in and it works. It’s a USB-C connection, so if you’ll want a cable clamp for your camera, since USB-C isn’t a locking connection, but from there you can mount it anywhere: on a cage, on your support system, on a gimbal, or if the cable is long enough, it can be over by your DIT if you really wanted. Once it’s connected, you just format the drive (and always make sure to format your media in-camera, by the way) and you’re off.

I will say that I’ve learned the Pocket 6K under-estimates its record times. The below times are listed on the display when selecting that format, but while testing I found the true times were actually MUCH longer. For instance, at 3:1 BRAW in 6K I actually got just shy of 2 hours of continuous runtime. No, I’m not gonna test each format, but the point is that the LYNC can facilitate recording for two hours continuously without issue. It does get a little warm after that much time though, hitting 90 degrees with the camera exhaust reading between 97-105. I also noticed that Q0 and Q5 mirrored the 3:1 and 12:1 times respectively, except for after taking a few quick clips when the estimates changed to what is listed below. Odd quirk with the Pocket 6K, but there it is.

Once you’ve filled a drive up you can simply edit straight off of it (after making a backup of course) by plugging the unit in via that same USB-C connection, or if you’re like me you’ll want to get enough drives for the day’s shoot, plus a couple extra, and swap them out as they fill up (if they even do fill up) without needing to re-format any of them.

So what about price? A 512GB CFast2.0 card can cost around $6-700 (or even more). A 1TB SSD costs $130. For the price of 32 (estimated) “CFast minutes” in 6K Braw, you can get over 6 hours (estimated) of SSD runtime. That’s a blowout from a price to performance perspective. No matter what you’re shooting, you want the best bang for your buck and an SSD solution like this is a great option.

From a workflow perspective, since these are standard computer SSDs, they are designed to be edited off of and you can do so by simply plugging the LYNC unit into your computer and firing away. I don’t believe that’s best practices with traditional recording media, such as CFast or SD or what have you but with an SSD, theoretically, you don’t even need to transfer the footage out, you can just back it up and edit from the drive you shot on.

I found that using the LYNC directly I was getting offload speeds of 412MB/s, which is wild because my CFexpress cards offload at 355MB/s, and CFexpress is one of the current supposed kings of the castle when it comes to speed. Granted, I’m using USB3 and if I had a Thunderbolt connection or something like that it could be much faster, but I don’t so I can’t test it. Suffice to say, 412MB/s is a plenty fast read speed for ProRes or BRAW. In any case, my suggestion would simply be to have enough drives for the shoot day, like I said, and then dump/copy them all later. You don’t want to be put in a situation where you accidently overwrite a drive you hadn’t dumped yet.

Performance-wise, I ran the camera until it filled a 1TB drive and I didn’t experience any hangups. Pulling the drive mid-recording, or unplugging the USB connection, didn’t seem to cause any corruptions in either Braw or ProRes with clips playing back flawlessly but ending abruptly maybe 2 seconds before the actual “pull” happened in reality. Now, that might have something to do with the Pocket 6K itself, but it’s nice to know that it’ll probably be the camera that causes any issues not the LYNC itself.

I was also able to really beat up the camera/Lync while it was recording, and it didn’t restart or drop or anything funky like that, which had actually happened to me on a music video shoot with the Pocket 6K and a T5 drive. Plus, with the T5 you’d have to take the drive away whereas here you’ve just got a dock and can hot-swap drives. While the Lync is larger than a T5, physically, from an ergonomic perspective it’s not that big of an issue as you can mount it pretty effectively wherever it works for you. To the right of the top handle on the Pocket 6K, for instance, I found it wasn’t blocking anything and I could grab the handle without knocking my hand against it. 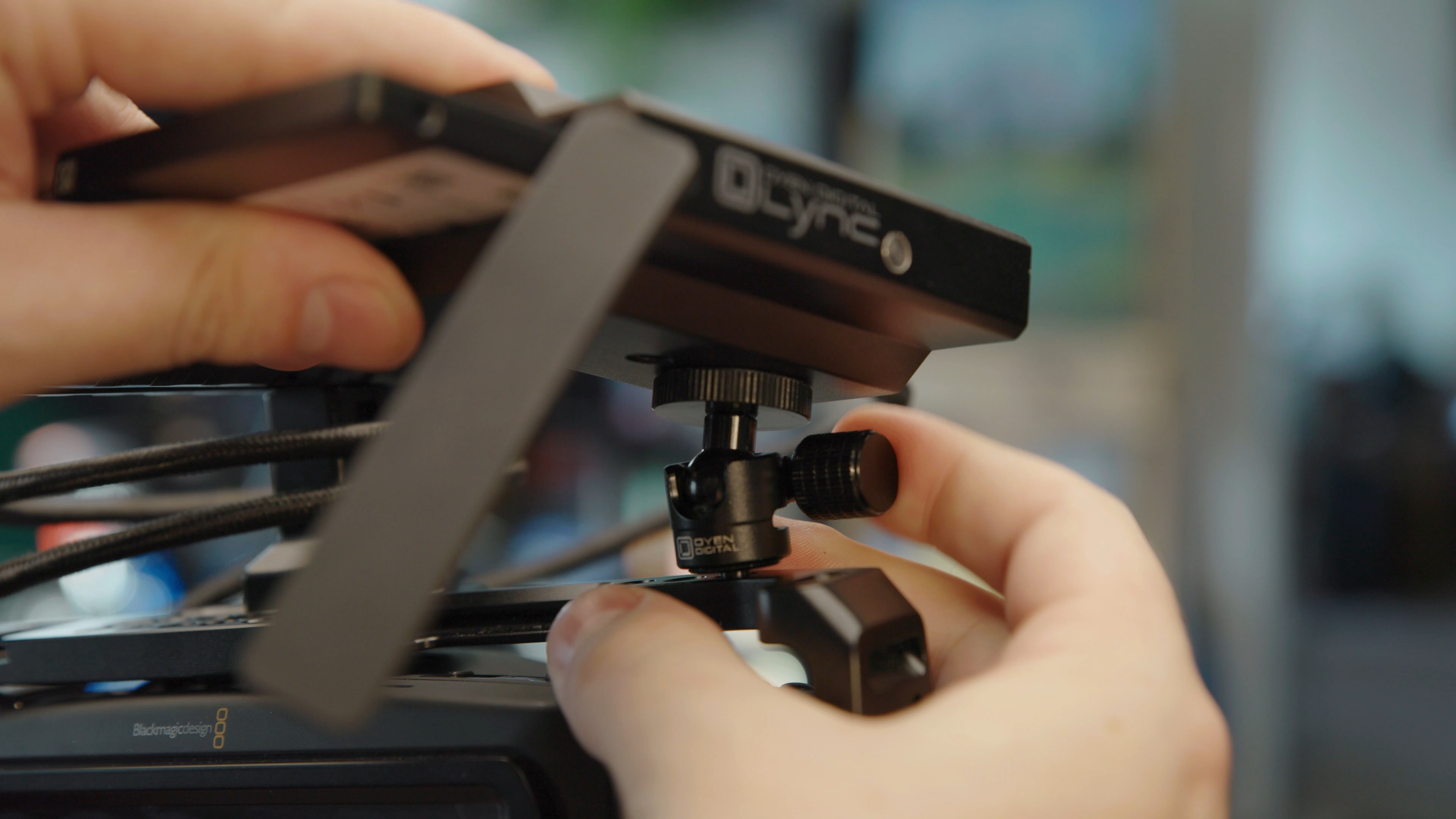 Speaking of mounting, the little ball mount from OYEN is nice. I thought having to spin the dock around a ¼”x20 screw would cause mounting issues, since you wouldn’t have enough room to do so in many orientations, but actually the bottom-half of the ball mount spins the screw below it, so you can just place it, spin the mount itself, and then tighten the retention knob and you’re good. I really like it.

Things I didn’t like? The dust cover kind of flops around, which isn’t great. I would like to see some management solution for it, just to keep it from dangling, but it’s got a screw holding it in and you can just take it off so not that big of a deal. Maybe some velcro is in order.

The LYNC seems to be a well made product that does what it says on the box. Can’t ask for more than that!