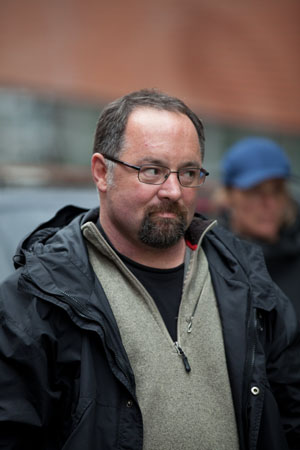 Cronenweth is nominated for an Academy Award in Cinematography for his work on David Fincher’s The Girl With the Dragon Tattoo. He is also nominated for an American Society of Cinematographers (ASC) Award and a BAFTA. The Academy nomination is Cronenweth’s second, following last year’s The Social Network nod. Cronenweth’s career launched at the dawn of music videos, gaining far-reaching acclaim for his work on groundbreaking videos for artists as diverse as U2, Michael Jackson, Nine Inch Nails, Shakira, Celine Dion, Christina Aguilera, No Doubt, Massive Attack, Moby and Macy Gray. He has won MTV, CLIO and MVPA cinematography awards. Cronenweth is known for utilizing dim-lit, close-up, long-shot filming of scenes, as exemplified in Fight Club as well as many of the music videos and commercials he has worked on. “Whether we were inside or outside, we always wanted to keep a shallow depth of field to keep the audience focused on what we wanted them to see,” says Cronenweth of his Fight Club technique.

In addition to his feature work, which includes Down With Love, K-19: The Widowmaker and One Hour Photo, Cronenweth is an award-winning commercial director. He and his brother Tim founded The Cronenweths, working out of the production company Untitled. The pair collaborate on spots and music videos. Their spot work includes popular ads for Jeep, Adidas, Nike, Apple, Gatorade, Gap, Master Card, Verizon and Tommy Hilfiger.

A Los Angeles native – and son of the legendary director of photography Jordan Cronenweth, ASC – Cronenweth is known for his ability to take new technologies into projects in service to the story. The Social Network and The Girl With the Dragon Tattoo were both shot with the RED Mysterium camera and he is equally adept in film and other formats. At the core of his artistic approach is a fierce dedication to the vision of the director and visually complementing the story.

Registration for the keynote discussions at Createasphere’s Entertainment Technology Expo is required, as space is limited. This one-day event is designed as a technology summit with top-level presenters, offering a unique and engaging opportunity to explore the intersection of future technologies in service to creativity. ??For further information and registration visit www.createasphere.com/ete or call 818.842.6611.

Createasphere was founded in 2001 as HD EXPO, and over the past decade has grown into a global company that develops and presents influential events for the content creation community, on line and face to face. Founded by Kristin Petrovich Kennedy in Los Angeles, Createasphere became part of Diversified Business Communications in 2009, now driving their entertainment strategies and properties division. Currently, Createasphere is presenting the Entertainment Technology Expos in Los Angeles; the Digital Asset Management Conference in New York, Los Angeles, and Europe; The DAMMY Awards in New York; the online news and content portal CreativeProCoalition.com; 3D Road Shows; and Post Production Master Classes.