Having the ultimate big-screen experience at home does not mean you have to buy the biggest TV set. Optoma aims to change the way people watch films with its new projector. 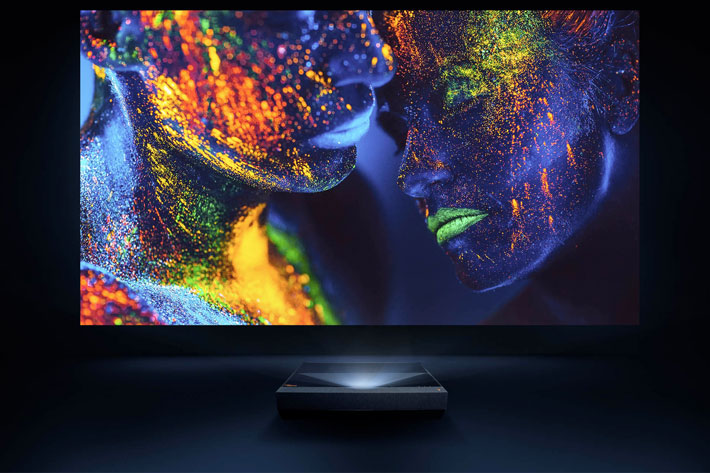 Your next TV set may not be a TV at all, but a projector. Unveiled at CES 2019, and now available, the Optoma CinemaX P1 laser projector is designed to change the way people watch TV and films. Capable of reproducing the Rec.709 colour gamut, the international HDTV standard to guarantee accurate reproduction of cinematic colour exactly as the director intended, the CinemaX P1 aims to take the place of your TV. You just need to have a wall, a wall big enough to use as the center of your home theater. 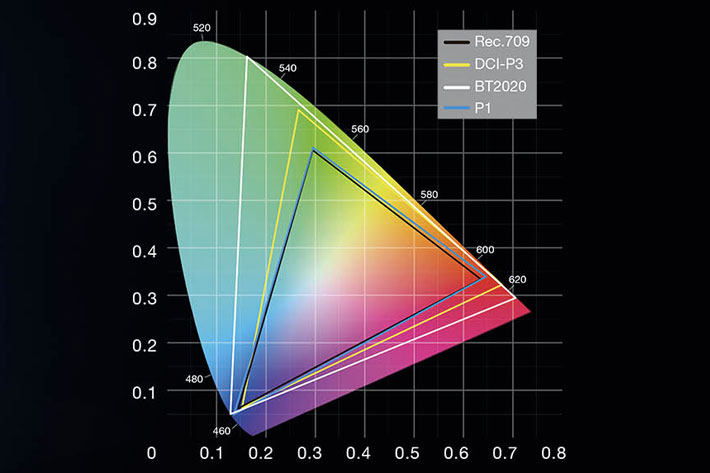 A big wall is all you need to get the most of the new product from Optoma. You see, the CinemaX P1 laser projector can project on a 100″ 4k screen and needs only a distance of a few inches from the wall. The ultra-short-throw technology that uses reflected light for projection is applied to replace traditional large screens and eliminate the injury that the backlight panel brings about directly to the user and minimize the eyestrain after watching TV for hours. The simple and elegant design language matches with the home environment and creates a projector that is not set up as a device but a decoration in the modern living space. 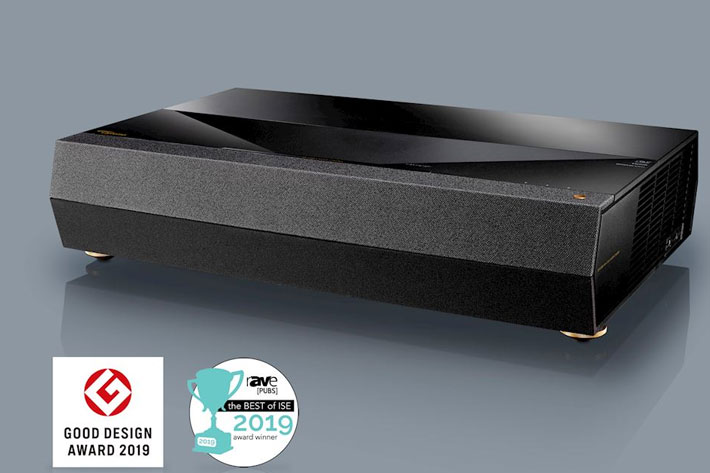 In fact, the CinemaX P1 laser projector can not only be used to view movies, TV and more, it can also be used to create a personalised digital wall of tailored information. Using the Optoma connect app you can schedule the projector to display the weather, videos and social media feeds. You can even schedule it to turn on at set times or wake you up naturally to a calming and relaxing playlist.

The Optoma CinemaX P1 laser projector is more than a projector that offers 4K UHD digital cinema quality images in a sleek space-saving form factor, thanks to the design of the ultra short throw laser. Incorporating a built-in soundbar powered by NuForce with Dolby Digital support, and the latest smart home features including voice control, IFTTT and a 4K HDR compatible media player, this powerful entertainment system provides accurate, true to life colour reproduction and incredible audio – perfect for recreating the ultimate big-screen experience at home. So when you come home with the results of your latest shoot you can be sure to reproduce them as intended. 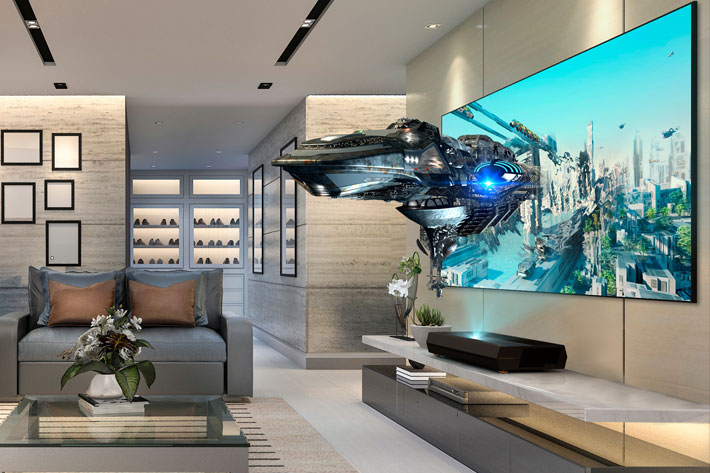 The Optoma CinemaX P1 also incorporates the latest Smart+ features from Optoma, including smart home compatibility with Amazon Alexa and Google Assistant capabilities, IFTTT support for seamless smart home automation with smart IoT devices and easy access to popular streaming services, including Netflix, Hulu and Amazon Prime Video, through the Optoma Marketplace. With Optoma’s Smart+ technology, users can take control of their home theater with simple voice commands, including powering on and off the projector, controlling lighting and volume, pausing content and more. 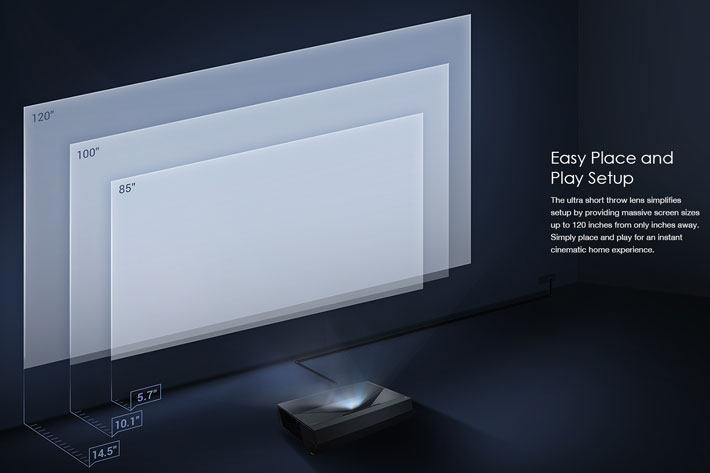 With an all-in-one space-saving form factor and sleek design, the CinemaX P1 produces instant out-of-the-box cinematic experiences without the hassle of mounting and transporting heavy equipment, making it an optimal solution for mobility and smaller-sized rooms and apartments. While VR headsets can be used to have a virtual big screen at home, they do not offer the option to have all the family watching the same movie, so the CinemaX P1 makes sense if you want a big screen but do not have the space.

Its ultra short throw lens means the projector can be placed closer to the projection surface allowing viewers to project up to a 120-inch image from just inches away. It also features SmartFIT, an auto geometry correction system to ensure a hassle-free set-up simply using a smartphone. Optoma projectors can also display true 3D content from almost any 3D source, including 3D Blu-ray players, 3D broadcasting and the latest generation games consoles. 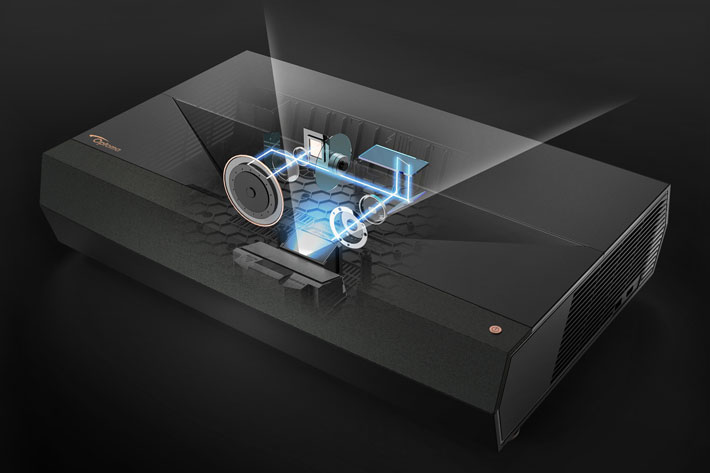 To improve contrast and brightness further, the CinemaX P1 can be used with Optoma’s 100” ALR101 ambient light rejecting screen. The specialized screen surface is designed to actively reflect a projected image for high contrast and solid colour saturation while preventing ambient light from washing out the picture. 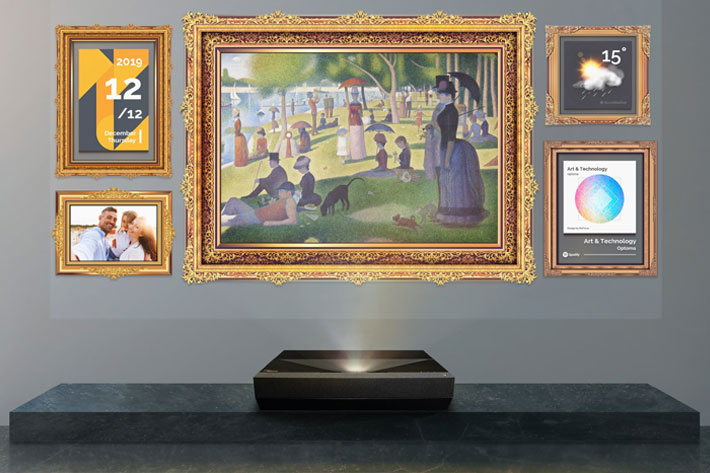