First impressions of the latest wide angle zoom from Nikon 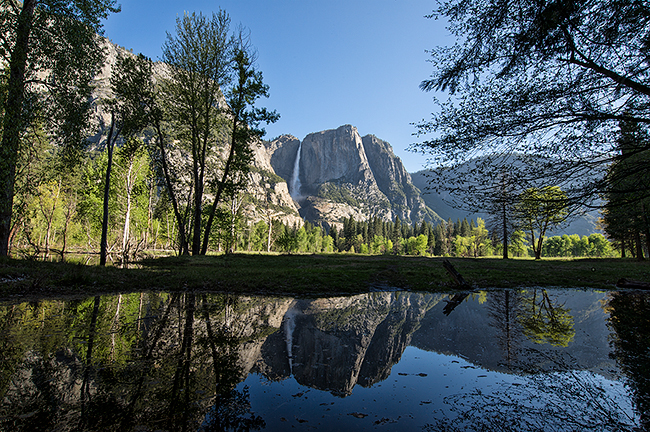 Nikon has been busy lately.  Almost every month it seems like a new lens is being released.  The 800mm F5.6, the 70-200 F4, the 80-400mm F4.5-5.6.  Of course, I want them all!  Another lens was released recently that didn't get as much fanfare, but may be the lens most photographers need, the 18-35mm F3.5-4.5G ED.  Adding another wide angle zoom to their lineup was an interesting move considering the excellent options already avaiable, the 14-24mm F2.8 and the 16-35mm F4.  I regularly shoot my 14-24mm for adventure sports and landscapes.  It's sharpness is well known, and it is one of my favorite lenses.  But this lens is expensive, and also weighs in at just over two pounds, maybe not the lens to carry on a two week backpacking trip or a month of travel in Asia.  The 16-35mm F4 weighs and costs less, and has VR.  But what is the wide angle zoom that is featherweight, very small and has excellent performance?  Nikon responded with the new 18-35mm.

I just returned from Yosemite, and had a chance to try out this lens.  Granted, this was only a few days of use, but enough to shoot a variety of scenes and varying apertures to gather some initial impressions.  First, I have to mention the weight and size, or lack of both!  This lens is so light it feels like a fixed 50mm.  Weighing in at just over 13oz., this lens is almost 1.5 pounds lighter than my 14-24mm, and at 3.74 inches long, you can carry it in a coat pocket. I used the lens on my D4 without a hitch.  The zoom is smooth, as is the focus when in manual.  Autofocus worked fine in the images I shot.  Some photographers have been concerned that this lens doesn't have VR and a fixed apeture.  Cutting these features allowed Nikon to make this lens so small and light, and they won't affect my shooting much.  I use VR on mid and longer telephotos when any moment results in blurry shots.  This is much less of a concern shooting wide angle, and I will use a tripod for slow shutter speeds.  I will mainly be shooting this lens at f8-f16 to maximise my depth of field, so the variable apeture isn't a concern for me.  And guess what?  Nikon kept the 77mm front so my existing fliters for many of my other lenses will fit.

How did the lens perform?  Fantastic!  The above shot was taken at F16 at 18mm on D4.  This is sharp, with minimal vignetting and distortion issues (no doubt Adobe will soon have a profile to fix these in LR4 and CS6).  I was surprised at the lack of vignetting, but no doubt the two ED and three aspherical elements improve overall picture quality.  At $1300 less and almost 2 pounds lighter than my 14-24mm, this lens fills the gap for a wide angle zoom to use on shoots where weight and size are major concerns.  I'm heading to Greenland in a few weeks, and I have already put in my order for this lens.  Retail price is $746.95