Intel worked together with AMD to create a unique new product, mixing a 8th Gen Intel Core processor with a Radeon GPU and HBM2 memory: smaller and more powerful computers, which will arrive to the market in 2018. 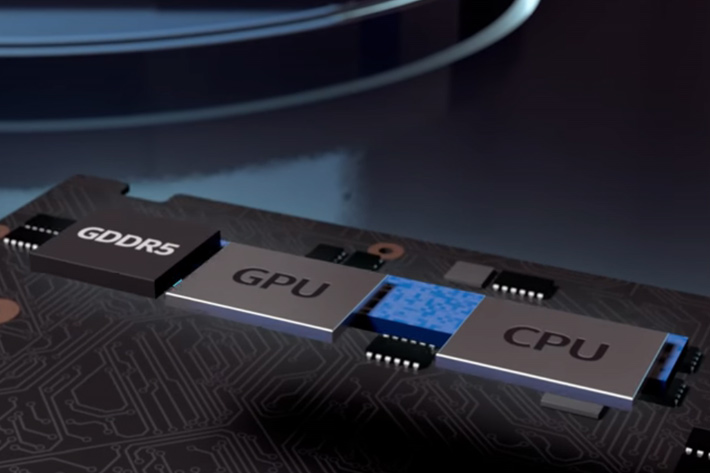 Whether you want a desktop solution or a portable workstation the size of a laptop, Intel and AMD may have what you need, mixing products from both companies. Smaller laptops and desktop computers

While the introduction of external GPUs to use with laptop computers is a viable solution for many users, not everybody wants to carry around  the extra volume and weight the solution represents. Intel may have a solution for those who still want a laptop to be completely and easily portable. In fact, the company also has a solution to create desktop computers that may be smaller than those we use today, and still offer similar or more power, be it for content creation, Virtual Reality or… gaming.

The new solution presented by Intel and announced by Christopher Walker, vice president of the Client Computing Group and general manager of the Mobile Client Platform at Intel Corporation, mixes a 8th Gen Intel Core processor with custom discrete graphics from AMD, allowing for the creation of sleeker, thinner devices.

Christopher Walker  wrote that “we often talk about our focus on driving innovation for the enthusiast community, a targeted but growing segment of the PC market. This point is underscored by what we have been delivering with our Intel Core X-series processors, Intel Core H-series mobile processors and, more recently, the first of our 8th Gen Intel Core desktop processors. Each product line offers a range of new capabilities, workloads and form factors to cater to the diverse needs of enthusiasts.”

The most recent laptops, which offer powerful mixes of CPUs and GPUs (my son bought one for editing video on the go and gaming, and now I rarely see him using his desktop computer with a huge screen), while trying to be as sleek and possible, may have helped Intel to recognize there was an opportunity to offer thinner, lighter, more powerful enthusiast mobile platforms that deliver a premium experience. Currently, according to Intel,  most enthusiast mobile PCs have Intel Core H-series processors plus higher-powered discrete graphics, resulting in systems that average 26 mm in height. Compare this to thin and light laptops that are trending down to 16 mm or less, with some even as thin as 11 mm. 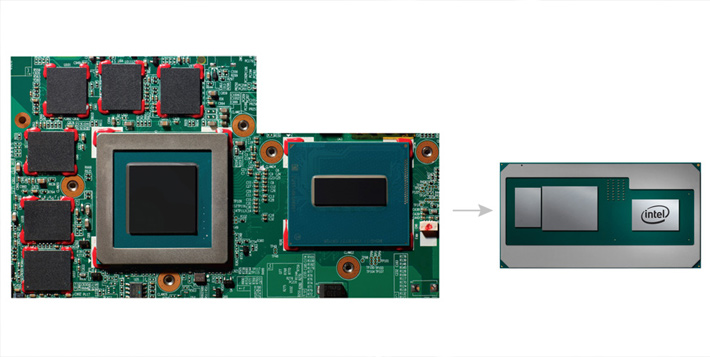 Intel wanted to find a way to change all this, offering the market even smaller form factors. They knew they could achieve it by combining Intel’s Embedded Multi-Die Interconnect Bridge (EMIB) technology with a new power-sharing framework. The EMIB at the heart of the new design is a small intelligent bridge, which not only is less complex to manufacture but also offers faster and more powerful communication between elements associated with it.

The new product resulting from the EMIB reduces the usual silicon footprint to less than half that of standard discrete components on a motherboard. Christopher Walker and Intel believe that represents “more freedom for OEMs to be creative and deliver innovative thin and light designs with improved thermal dissipation. It also delivers space to add new features, create new board layouts, explore new cooling solutions or increase battery life.”

The new product offers in a single processor package, which will be part of the 8th Gen Intel Core processor family, Intel’s high-performing Intel Core H-series processor,  a second generation High Bandwidth Memory (HBM2) and a custom-to-Intel third-party discrete graphics chip from AMD’s Radeon Technologies Group. The announcement confirms long time rumors of a cooperation between Intel and AMD. Intel worked with the team at AMD’s Radeon Technologies Group to design a new semi-custom graphics chip, opening the doors to the creation of a product that fills a unique market gap. 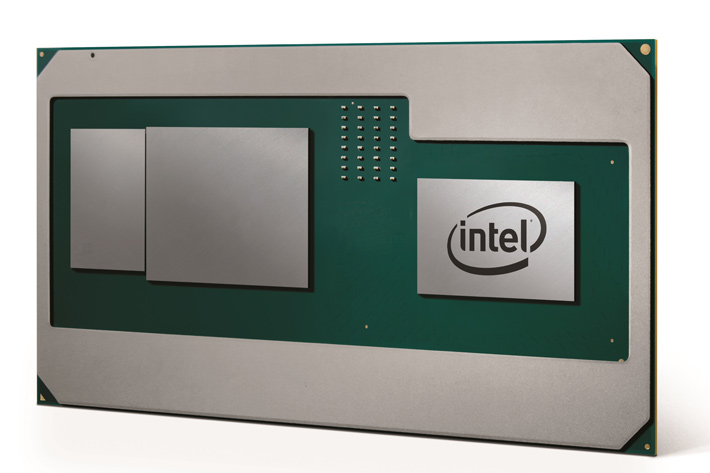 “Our collaboration with Intel expands the installed base for AMD Radeon GPUs and brings to market a differentiated solution for high-performance graphics,” said Scott Herkelman, vice president and general manager, AMD Radeon Technologies Group. “Together we are offering gamers and content creators the opportunity to have a thinner-and-lighter PC capable of delivering discrete performance-tier graphics experiences in AAA games and content creation applications. This new semi-custom GPU puts the performance and capabilities of Radeon graphics into the hands of an expanded set of enthusiasts who want the best visual experience possible.”

This is the first consumer product that takes advantage of the small intelligent bridge EMIB, and the solution is also the first mobile PC to use HBM2, which consumes much less power and takes up less space compared to traditional discrete graphics-based designs using dedicated graphics memory, like GDDR5 memory.

The new product opens the door for the creation of thinner, lighter notebooks, but can also be implement on desktop solutions, reducing their footprint, while delivering incredible performance and graphics for enthusiasts. Intel says that this demonstrates the vitality of the PC market and that users should expect for more to come “in the first quarter of 2018, including systems from major OEMs based on this exciting new technology.”