This one’s got variable white balance!

The new bi-color Zylight F8 200w LED Fresnel is a very thin, single-chip fixture with a CRI of up to 97 and the output of a traditional 400W HMI. It also has an IP54 resistance rating, meaning that it’s built to withstand splashes from any direction and can handle a light dusting. 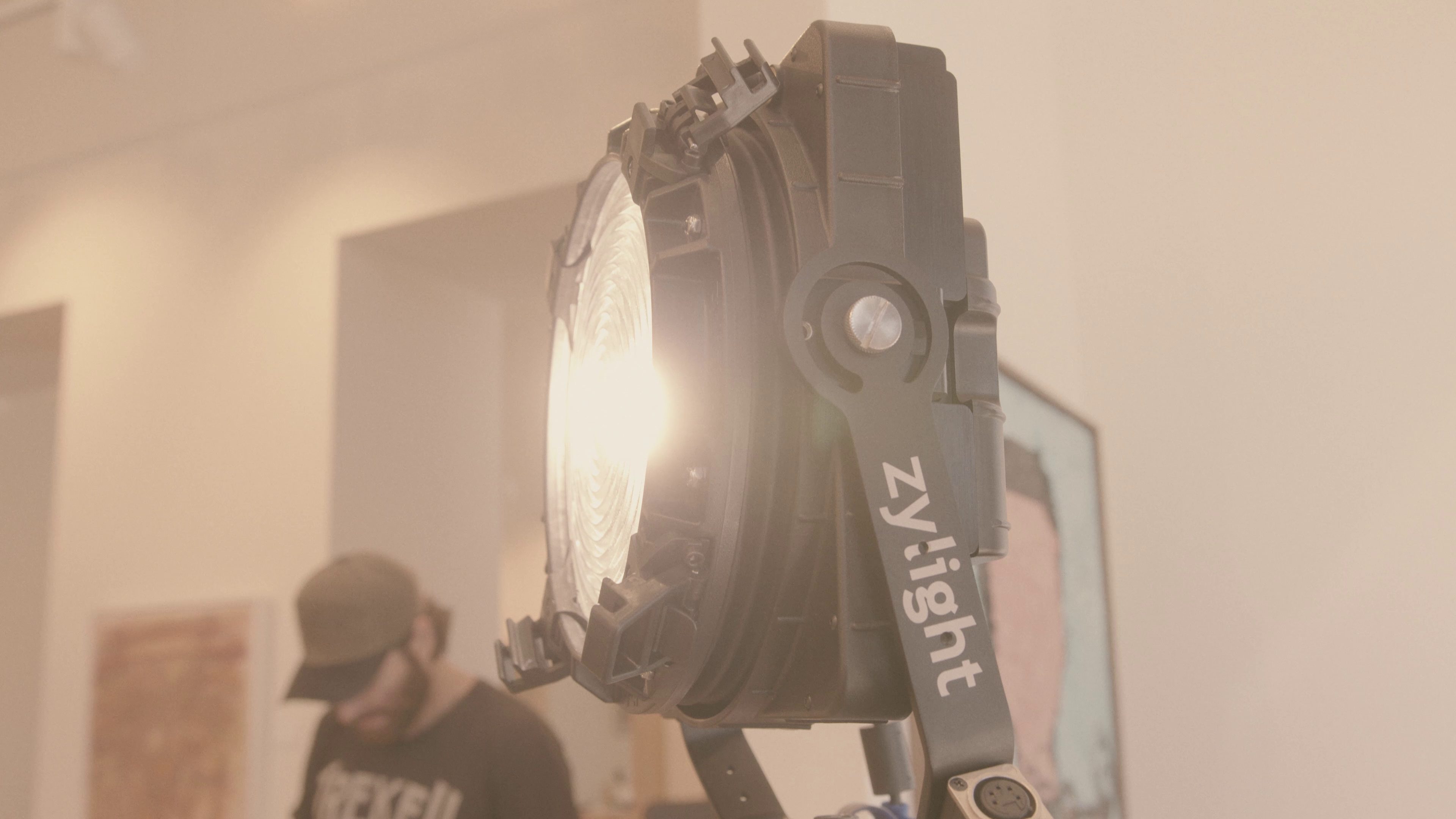 The light is nice and simple, with two knobs for adjusting Color Temperature and Power respectively, with a third bigger knob on the back to extend the bellows on the lens to adjust between flood and spot.

Now, while Zylight released the F8 a few years ago, this version is variable bi-color, whereas before you could only get a tungsten or a daylight version. Now, the one they let me borrow is technically a prototype, but as it stands can be adjusted between 2800K and 6000K. 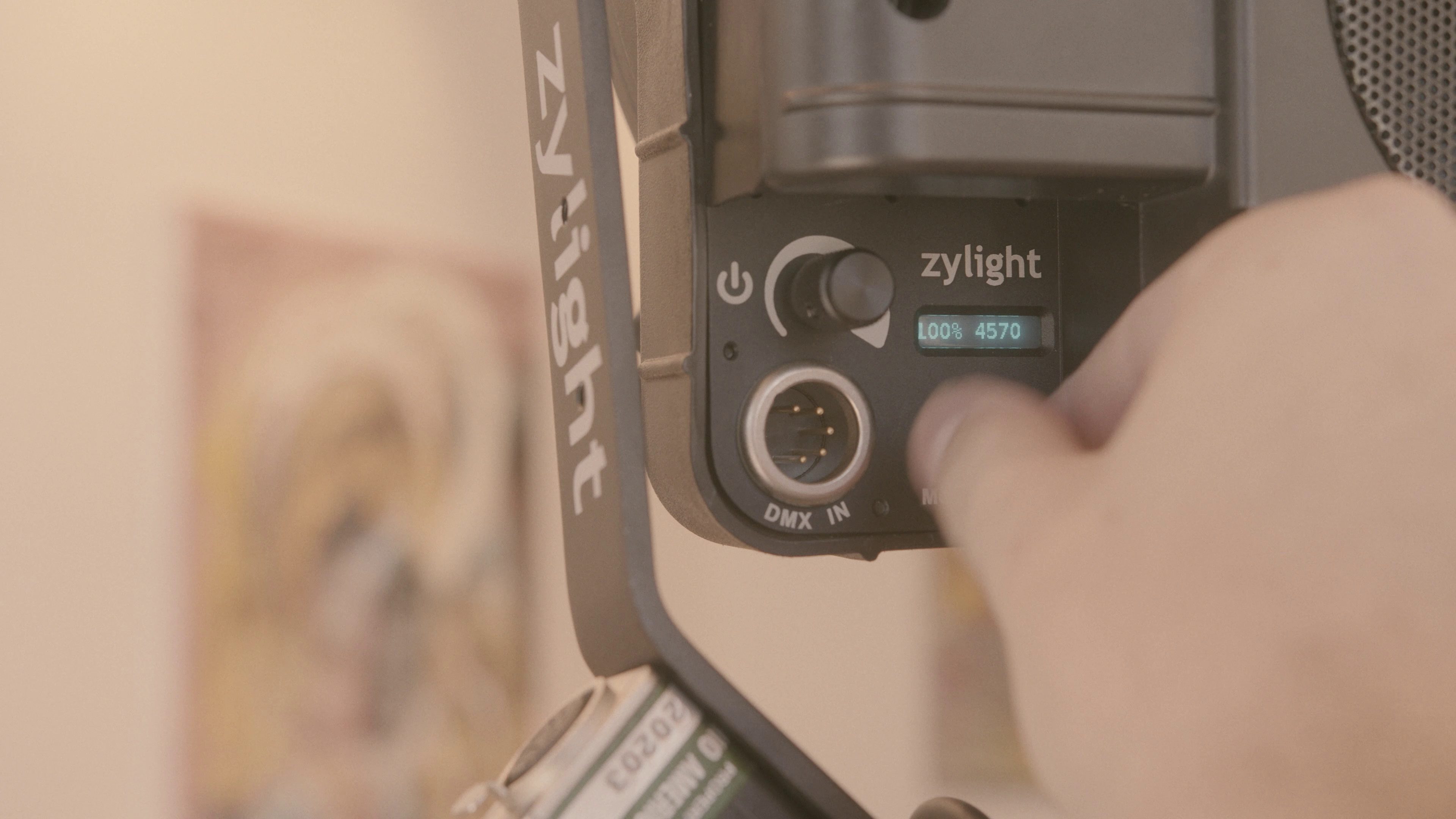 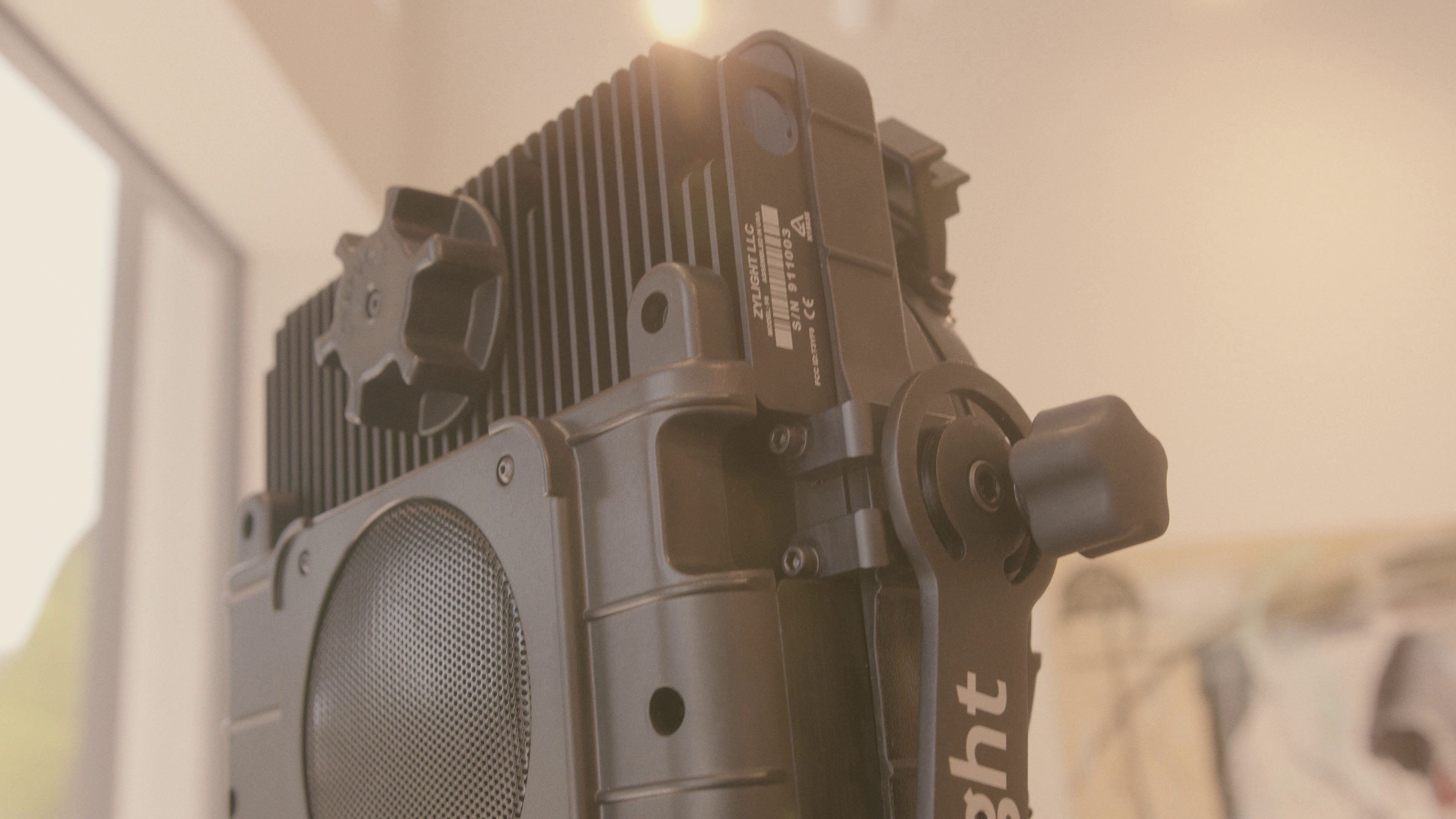 Aside from the nice little knobs, there are also DMX and “Zyconnect” options, the latter of which being Zylight’s proprietary connection situation.

In filming a promo for Chase Lock’s new solo gallery at The Olympia Club in Santa Monica I used the light to act as sunlight from the big windows that were present at each location since we were always in “shade”.

The light was simple to set up, powering up immediately when plugged in. From there I would just dial in the color temp and intensity to match the ambient light by eye, which I was able to do easily because of the simple knobs on the back. Nothing is worse than setting up a light only to have to take it back down because you need to physically see the menu screen or buttons on the back. In my conversation with a rep at Zylight, this simple layout was done intentionally and on some new products, they’re even working on differently sized or textured knobs so you can tell what you’re adjusting tactilely without ever needing to see the menu. 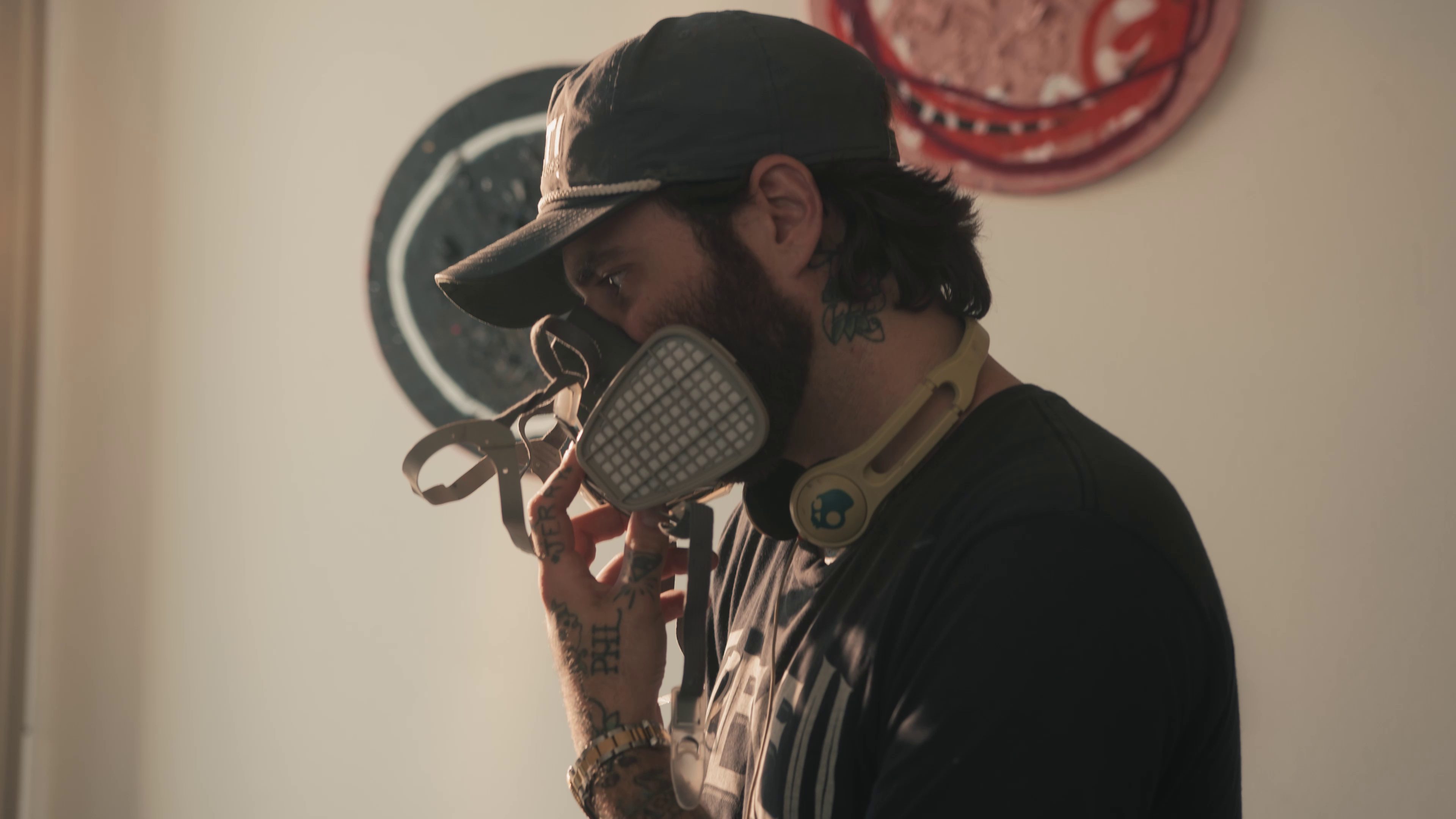 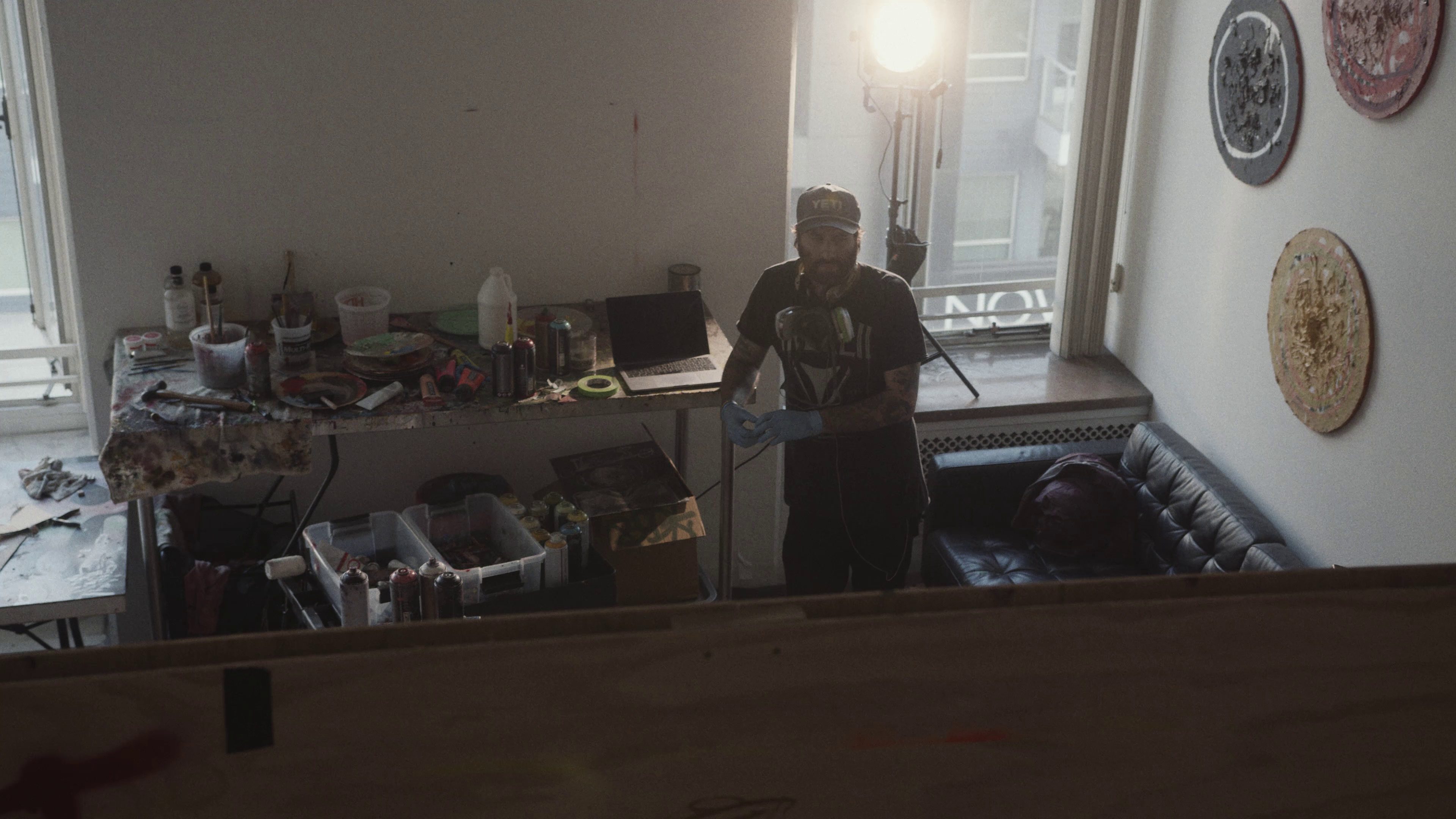 The cable is kind of short, but it’s the power brick kind where one end can be removed and comes in a nice little bag for you to hang off one of the knuckles of your light stand. The cable that goes into the bag is a standard power cable like you’d find on a computer or monitor, so I’m sure you could just find a long one somewhere online or at a computer store and be good to go.

As far as the light is concerned, I really like this thing. LEDs tend to be either too soft or not powerful enough, but this Fresnel hits a nice sweet spot. The Fresnel lens gives the large single-chip a lot of throw and focuses the light into a nice semi-hard beam.

I took a few readings in a dark room, metering for ISO 800/24fps,  with the Zylight as the only source of light and got pretty decent numbers. The results like “f13/11/8” refer to the readings I was getting in the center vs going towards the edges. If it’s just one number, it was essentially uniform:

In my opinion, hard-light is undervalued these days. Kinos and LED Panels give off beautiful soft light but it’s not very precise without a decent amount of grip. A Fresnel can be softened if needed, but generally has a ton of punch and allow you to be more aggressive with your lighting.

Now, one thing I will say is that LED lights are not, or at least rarely are, full-spectrum sources. One of the reasons we like tungsten light so much is that it’s a light that gives off a bit of color from across the spectrum with no spikes in it, obviously having more intensity in the reddish-orange end of the spectrum. This fixture does an excellent job of replicating daylight and tungsten sources, but I will say that it did seem to skew somewhat green on the tungsten side of things. Color meters are like $1500 so obviously,bag I don’t own one, but just comparing it to the tungsten lights around me, I did note that it was a touch green. That being said this is a prototype model so for all I know that can be corrected out. It didn’t really affect me but I figured it was worth mentioning. 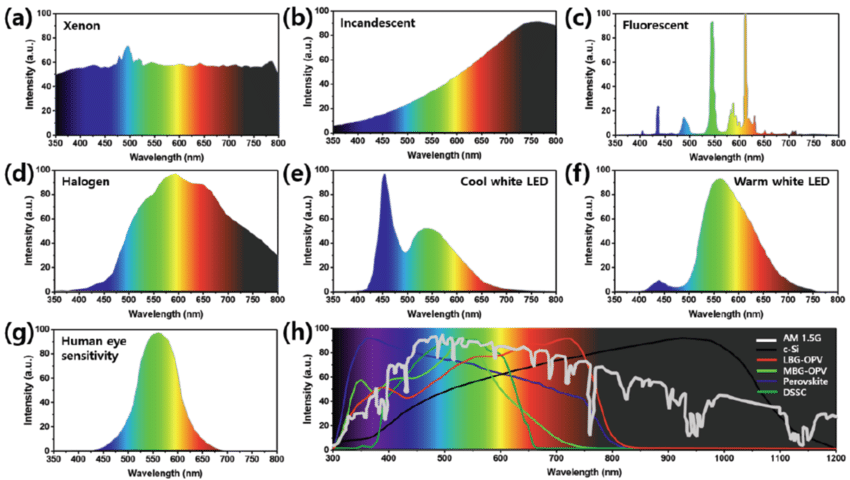 Overall this thing travels great, is super simple to set up and use, and adds a lot of versatility to your lighting kit. You can even power it with regular cinema batteries making it an incredibly attractive option for filmmakers on the go or even newscaster types. It’s so thin and the case is so durable that you can easily chuck a few in your trunk with a few light stands and you’re off to the races.

The variable white balance F8 will apparently retail somewhere in the neighborhood of $2,000 once they start making them for real, so that’ll be a pricey trunk to be sure but that’s a relatively competitive price considering the benefits of the super slim profile and low power draw compared to regular Tungsten Fresnel fixtures that go for a quarter of the price and give off *way* more heat.