It was a big Apple day for pro users after today’s Apple Event as the long rumored and redesigned (is better designed a word?) MacBook Pro dropped as did new chips in the transition to Apple silicon as well as updated Pro Apps, including Final Cut Pro 10.6.

If you’re interested in this stuff I would encourage you to watch the keynote and get an idea of what kind of performance Apple is expecting out of the new chips in these new MacBook Pros. Of course they are going to be giving us the best results but what people have been seeing out of the more consumer oriented Apple silicon chips has been quite impressive.

The MacBook Pros revert back to a more usable form with the addition of MagSafe coming back, as well as ports like HDMI, a headphone jack and an SD card slot. The Touch Bar is gone and actual F-keys you can push make a return.

In addition to all the updates today, which I’ve listed below, there were a couple of things that I keyed in upon as I watched the keynote which are especially relevant to those of us working in video and post-production.

There are two new Apple silicon chips, the M1 Pro and M1 Max. I am a firm believer in upgrading to the latest and greatest in the world of post-production so the Max is what I would be attracted to. The 16-inch MacBook Pro with the M1 Max begins at $3,499 so it isn’t cheap but the performance numbers look really good. 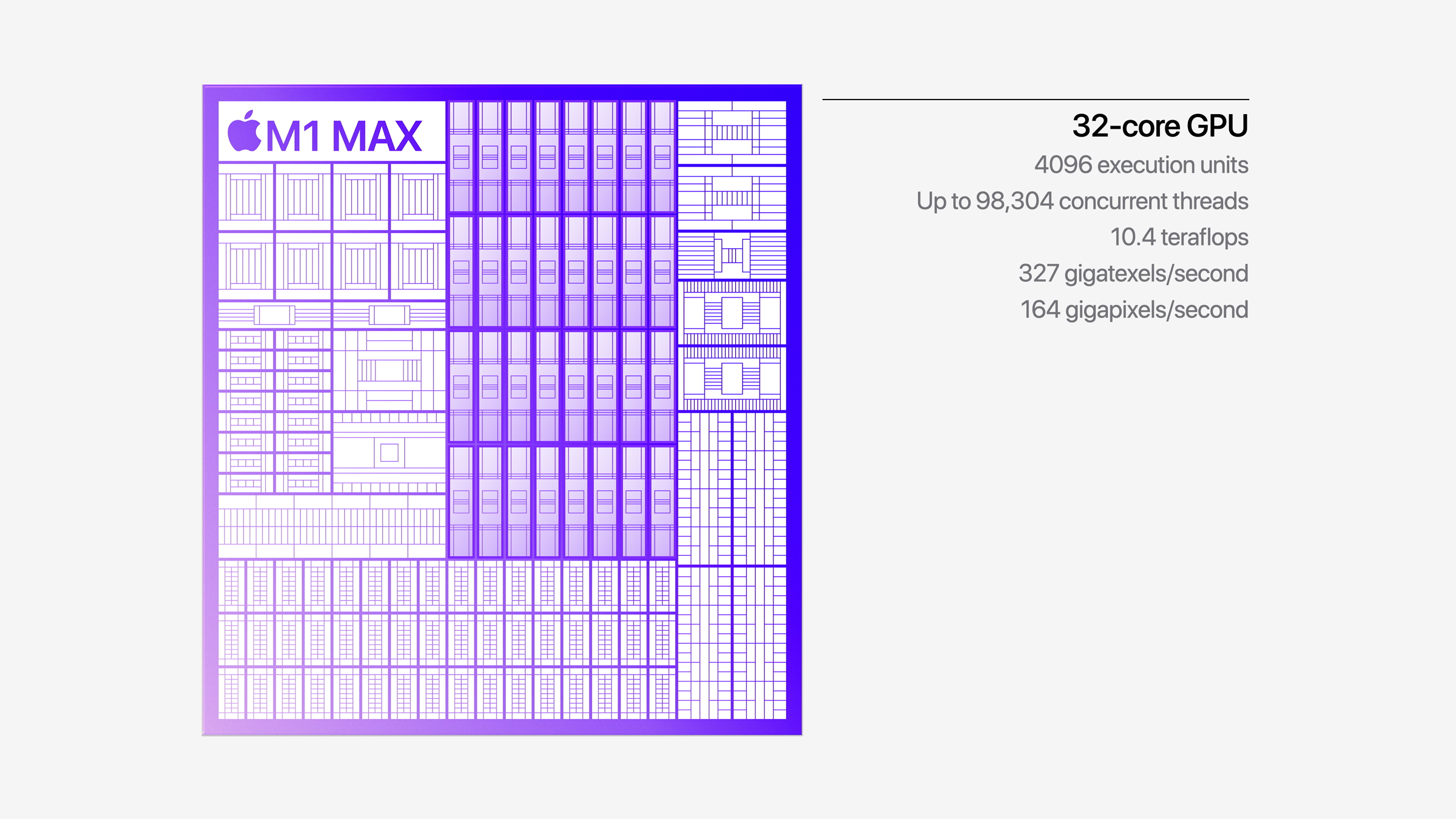 Those big numbers above are nice but look at this image below (red arrow emphasis mine): 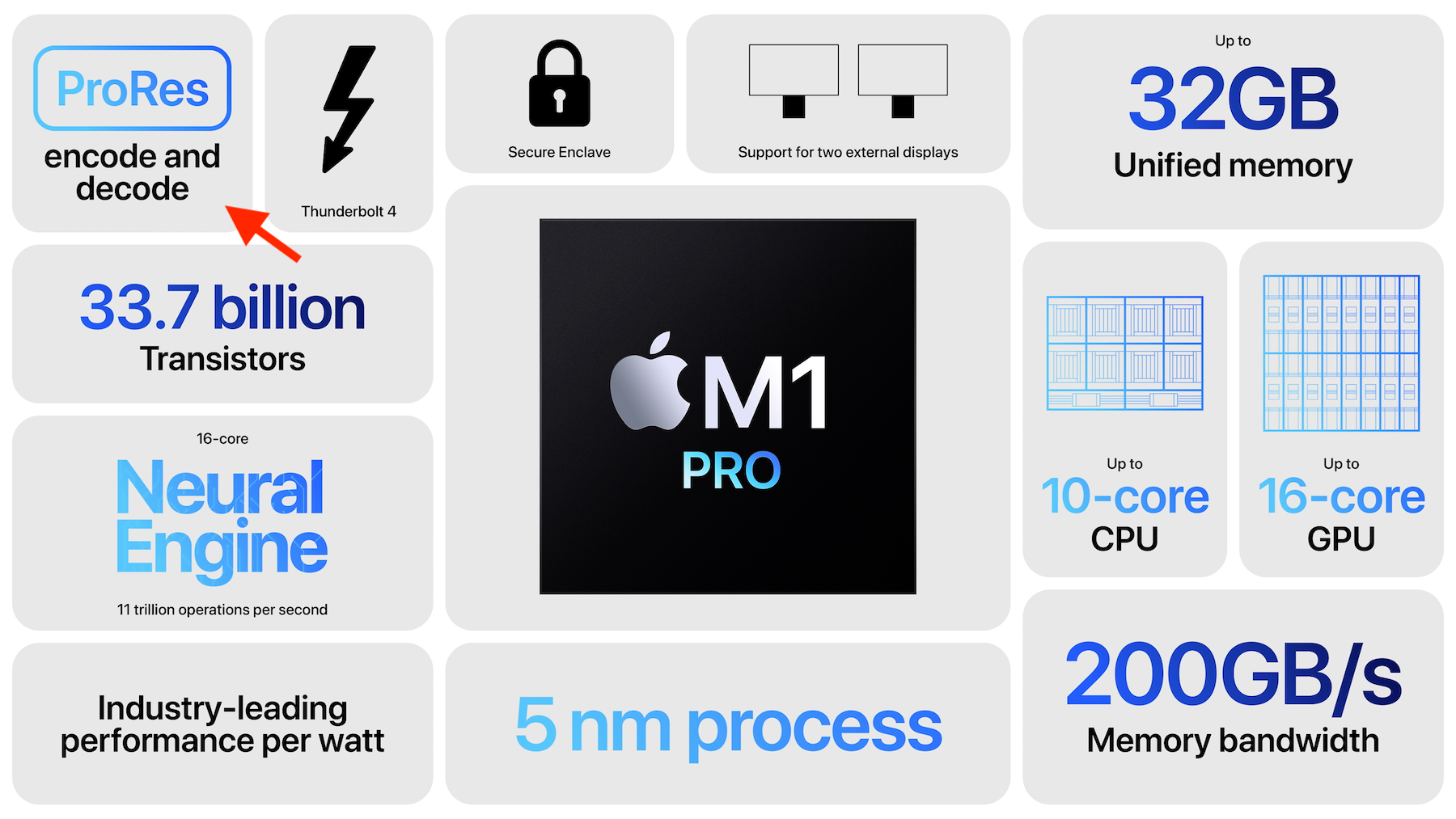 Having ProRes encode and decode built into the chip is huge for post-production. ProRes workflows are an incredibly fast and stable way to work and anything to smooth the process is welcome. Where I hope this will really shine is during the ProRes transcoding process that is currently a bottleneck in post-production workflows, one that many people don’t see the value in facing since transcodes take time, no way around it. The advantage that transcoding to ProRes can pay in the end is enormous so to get there faster and more often is going to be big.

UPDATE: I gave this new tracker a bit of a play once I got home when I read that you can apply the tracker to something like a title by just dragging the title right onto the image and letting the tracker “look” at the image and help decide what to track. As someone who doesn’t really like to go into After Effects for this type of object tracking thought … that’s cool!

Notice how the tracker sees what is in the image as you start to apply it. I was pleasantly surprised to see Face pop up in there! That’s very cool and makes it very easy to apply for lazy motion graphic editors like myself.

You can see the different types of options once a tracker is applied and change the analysis method if you choose. This will be fun to explore.

I wasn’t able to try out the Cinematic Mode tools in FCP 10.6 as that requires MacOS Monterey.

FCP gets updated to 10.6 to take advantage of these new machines. The big feature updates are a new object tracker and the ability to edit Cinematic Mode from the new iPhones 13 Pro. Have a look at some detail on those features right here on PVC.  You can also click over the official Apple Final Cut Pro page and see a little video of these new features in action. 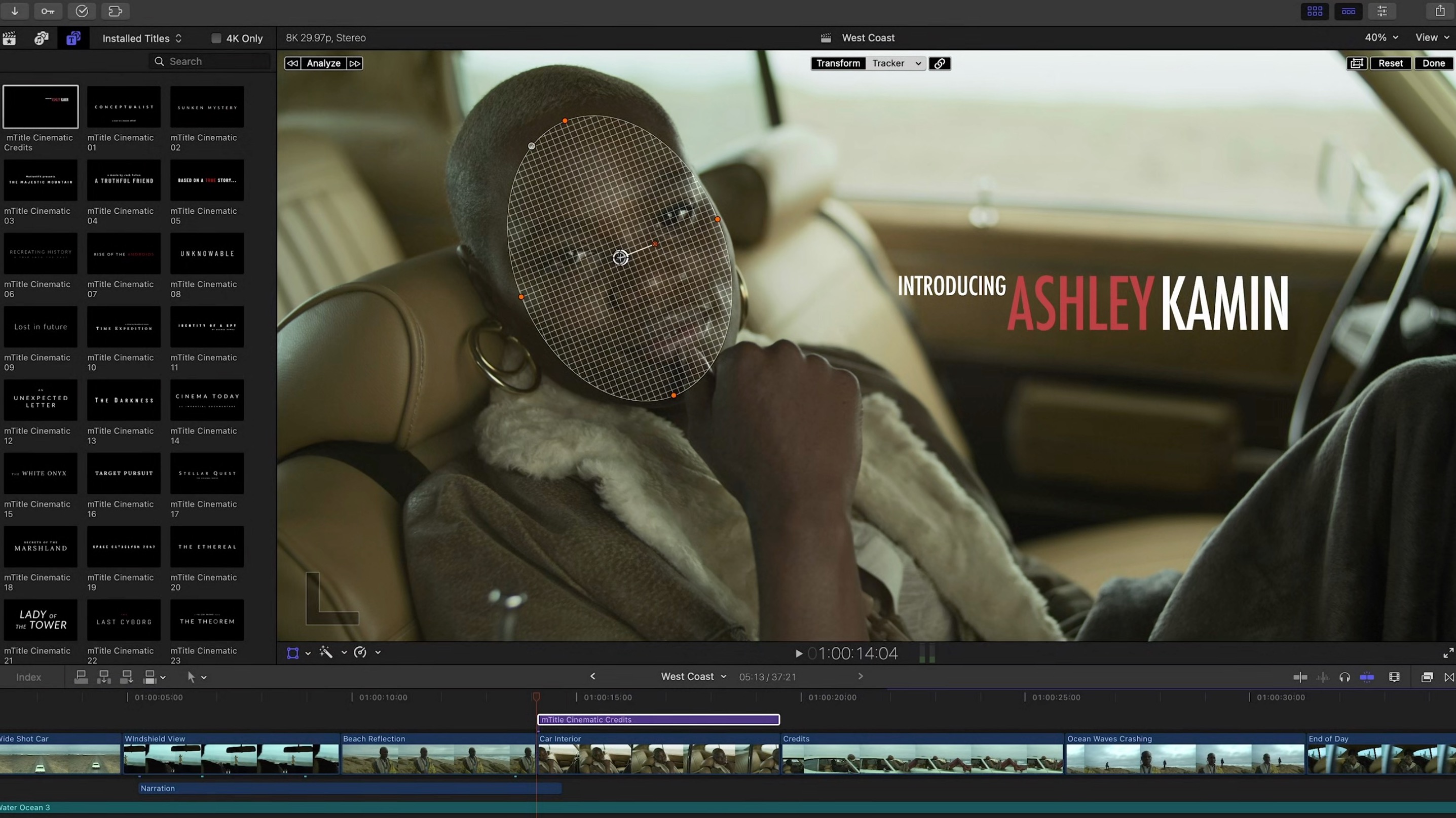 • Drag effects, titles, or generators into the viewer to automatically detect, track, and match the movement of faces or objects using machine learning

• Manually add a tracker from the inspector, adjust its mask shape, and choose between different tracking analysis types 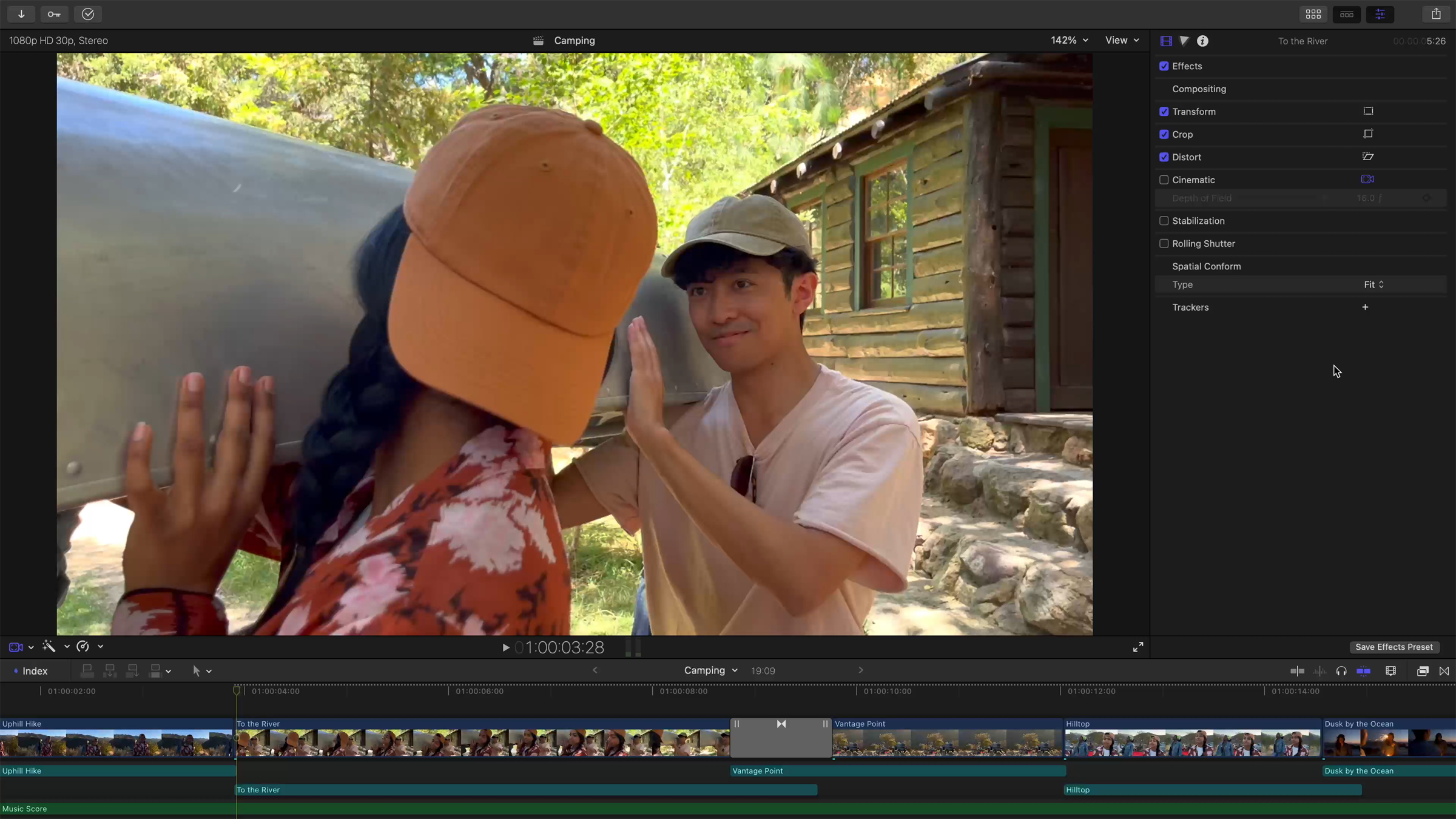 • Use Cinematic controls in the inspector to modify the intensity of the depth effect, and add keyframes to change the effect over time

While you don’t need new Apple hardware for these updates you do need macOS 11.5.1 or later.

The Pro Apps also get updates to Compressor, Motion and Logic Pro. All updated to take advantage of the new tech.

The new 14 and 16 inch MacBook Pros return a lot of lost ports and the lost F keys. I’m probably one of the few that didn’t hate the Touch Bar but I ran my MacBook Pro with an external keyboard way more often than not. What’s great is to see Apple listening to customers who wanted some of the old stuff back, like MagSafe. The bullet points:

The bigger screens get pushed to the edge with a smaller bezel so there is a notch in the new screens to accommodate the front facing camera. They showed this design with the Mac app menu bars being place in that space. When you’re working with video it will most likely scale and fit below the notch when viewing full screen so I doubt the notch will be much of an issue. The re-introduction of the ports is a big thing. I am most happy to see the HDMI port return as editors very often are plugging up an external monitor first and foremost when making a MacBook Pro a main part of their edit suite. 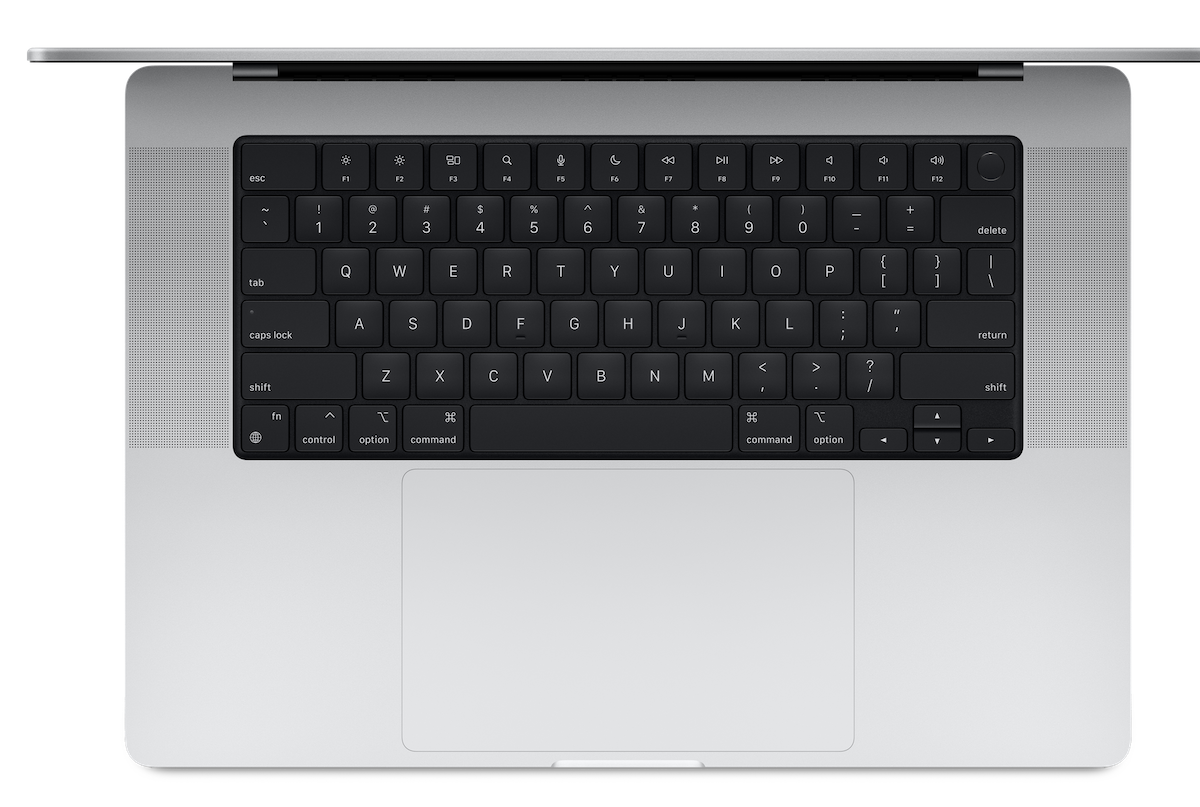 And yea that keyboard… looks nice.

One more thing about that keynote…

While Final Cut Pro got several mentions and was featured on-screen many times I was very surprised to see both Blackmagic DaVinci Resolve and Adobe Premiere Pro featured not just with a mention and a screen shot but actual Blackmagic and Adobe engineers and product managers on-screen, mentioning their products and the benefits of what this new power might mean for their video applications.

I love it when a company recognizes that many of us have to use multiple, competing tools in our post-production careers and we love them all equally.

Being multi-NLE fluent is a necessity in post-production these days. No one is an island anymore.

Excited to see where this and FCP is going.

This is around 27 minutes into the keynote video in the MacOS section.

We all have to work together and the tools can complement, not compete with each other.