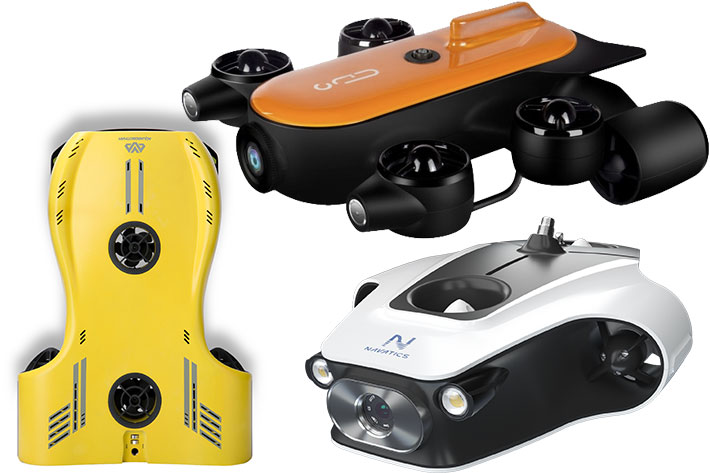 Nemo, Titan and and Navatics Mito are the names of three new underwater drones recently funded on Kickstarter. All promise better options for filming underwater in 4K UHD.

Aerial drones are common these days, but there seems to be a new trend, and underwater drones may well become something that filmmakers and photographers will look at, as the new models available suggest there are new and easier ways to capture both stills and moving images underwater. Three new projects, all on Kickstarter, promise one common feature, 4K UHD video at 30fps, and each is presented as offering unique characteristics. The Nemo, for example, is announced as “the world’s most stable underwater drone and 4K video platform with the world’s first 4-thrusters design”, while the Titan is presented as “the deepest diving underwater drone for everyone” and the Navatics Mito is introduced as the “world’s most stable recreational underwater drone”. One has to look at the complete specifications to better understand what each drone offers. 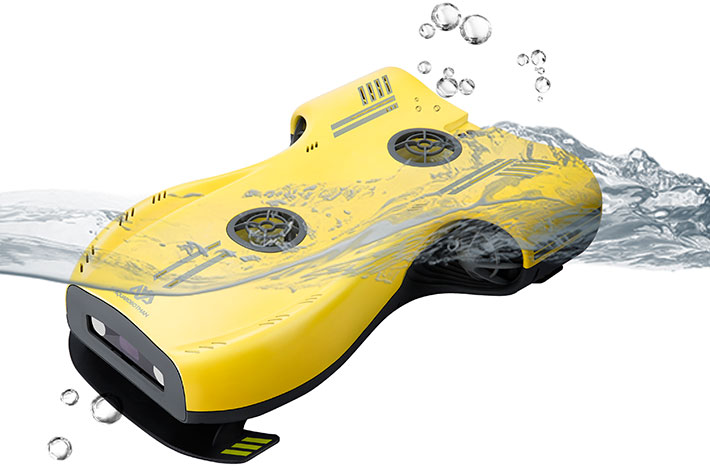 Let’s start with the Nemo, whose Kickstarter campaign just ended, with 78 backers pledging a total of $84,078 of a $30,000 goal. According to the information available on the Kickstarter page (Nemo was also on Indiegogo), the Nemo will be available July 2018. The press-release states that “using the most advanced underwater drone technology available today, Nemo can dive to 100 meters deep and explore the underwater world while capturing incredible photos and video in true ultra-high definition 4K.”

Designed by a team of engineers and photography experts, Nemo is a pro-quality, full-featured remote underwater drone that is priced, says the company, “perfectly for the consumer market”, at $1799, although backers could get it for more during the campaign. Nemo improves, says the team behind the project, “on other underwater drones by using a patented QAS-balance system with a 4 tandem thruster design that provides the most stable underwater video platform possible. The increased stability and control makes images and video more clear and in-focus. It also adds a powerful lighting system with an 8 LED fill light matrix that lights up the undersea world in vivid color and clarity. 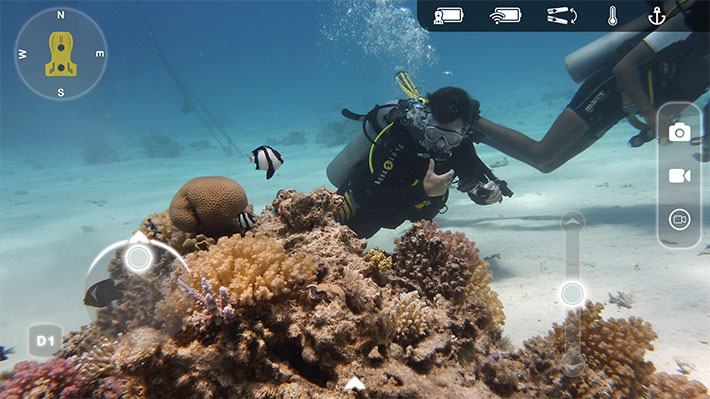 “As enthusiasts ourselves, we loved the idea of underwater drones and the ability to film in high definition. We quickly realized that a great camera is only part of the solution. The drone must also be capable of excellent underwater stability, something that was lacking in other devices. We used a special QAS balance system with a 4 tandem thruster design to achieve incredible movement control as well as stability. This allows Nemo to capture the world around it incredible detail.”  said Peng Hou, Nemo’s CEO. 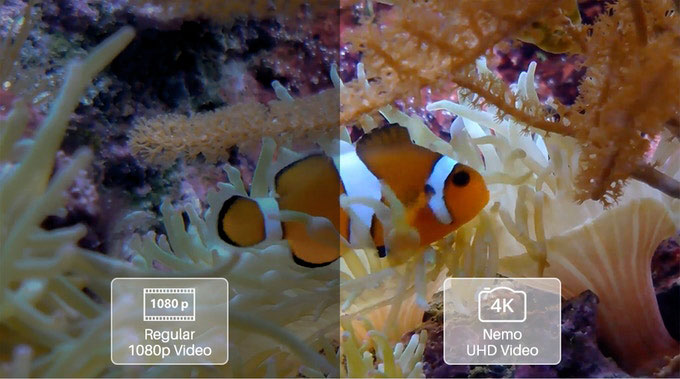 Nemo is a professional quality underwater drone, designed with ease of use in mind. It also offers an immersive Virtual Reality experience achieved by using VR goggles with the system. It gives the user an unparalleled real-time view that has never been possible before.

Aquarobotman, the innovation company focused on underwater robotics technology and products responsible for Nemo, has spent the past three years testing prototypes, until reaching the actual model. Nemo is a professional quality underwater drone, continues Aquarobotman, “yet it is made with ease of use in mind. It is simple to use for beginners with an intuitive app that allows control by smartphone or tablet. It uses a dedicated Wi-Fi signal making total control possible to depths of up to 100 meters. With Nemo, users stay dry and comfortable while exploring an amazing underwater world.” 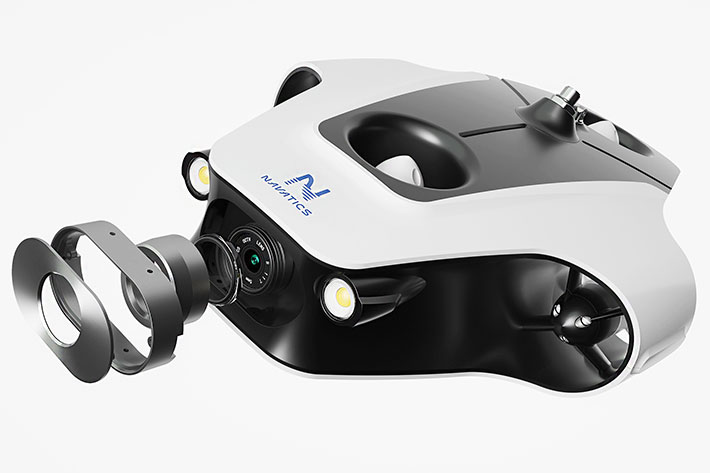 The second underwater drone on Kickstarter is the Navatics Mito, a remotely operated underwater vehicle (ROV), equipped with an advanced active stabilization algorithm. With 26 days to go, the project is already funded, with 78 backers pledging $ 98,249 of a $30,000 goal.

“Our first mission is to create an underwater robot with the ability to stream out high-quality video and maneuver with maximum stability to get the best footage.” said Andreas Widy, CEO of Navatics, introducing the project, which answers the expansion of the market for underwater consumer drones. The segment is growing rapidly driven by its rising popularity and expanding application in different industries, following the same path demonstrated by aerial drones. Now, with underwater drones, it is time to open up a new frontier below the water level.

Able to dive deep down to a maximum of 40m (130ft), the MITO can record video of the marine environment in 4K UHD resolution up to 30 fps. Equipped with two 1000 lumen LED lights, it brings back color to the deep blue world. Stabilization was an essential element for video capture, so the Navatics team developed an advanced active stabilization algorithm, which allows the MITO to hover even in a strong current and keep its orientation and focus regardless of the complex environment underwater. The team adds that it manages new levels of underwater video shooting steadiness previously thought impossible in such a small underwater drone. 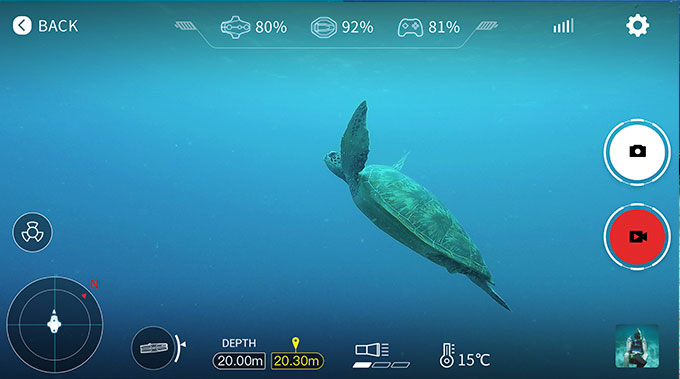 Powered by Senseplay wireless communication solution, all the visuals captured by MITO can be live-streamed at a 1080p resolution up to 500m/1640ft away to the Navatics smartphone app. Aside from controlling the drone and the camera, another important function of the Navatics app is the color correction, which makes the color look as natural as the way the human eye sees. Images and videos can also be shared directly to social media from this app. 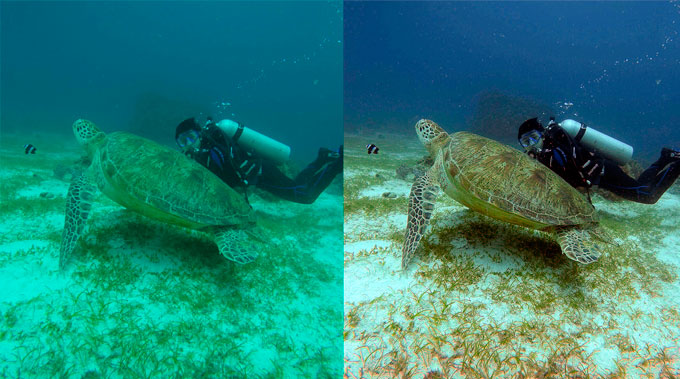 At only 6.6 lbs., MITO fits in a carry-on luggage together with all its accessories. Able to work up to four hours on one charge, the Navatics underwater drone will have a retail price of $1999. Estimated delivery for the first units is September 2018. 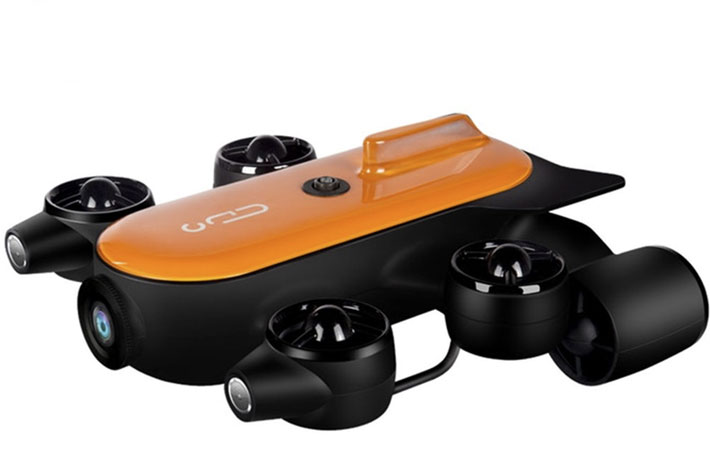 The third underwater drone on Kickstarter is the Titan, presented as the deepest diving underwater drone for everyone. Able to go as deep as 150m/492ft, the Titan easily takes the crown of “depth king”, when compared to the other drones presented here.

Winner of a Red Dot Design Award in 2018, the Titan aims to make remote underwater exploration fun, easy, and accessible. A total of 66 backers believe this is the drone for them, pledging a total of $97,378 of a $50,000 goal, and the project still has 34 days to go. The first backers will get their drone August 2018, and the final release price will be $2599. Titan is the second underwater drone from the company, Geneinno, founded in 2013 and a familiar name in the drone industry. Poseidon 1, from 2016, was the first drone created, and the experience acquired was used to develop Titan. 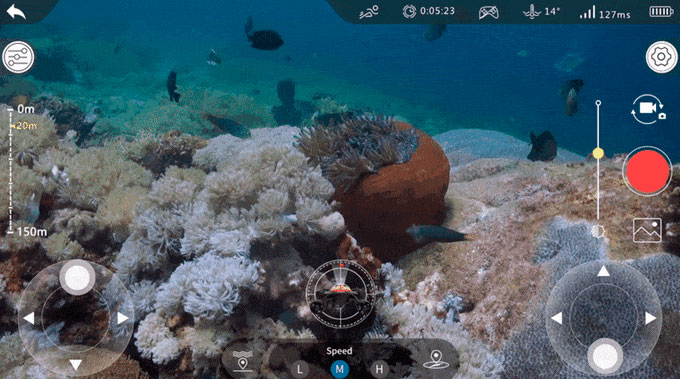 Powered by 6 high performance thrusters and guided by a precise steering algorithm, Titan commands, according to Genneinno, the speed, endurance, and agility needed to withstand demanding deep dives and strong currents. The underwater drone can be easily controlled through a smartphone/tablet app, allowing users to capture underwater 8 megapixel images and 4K UHD footage. 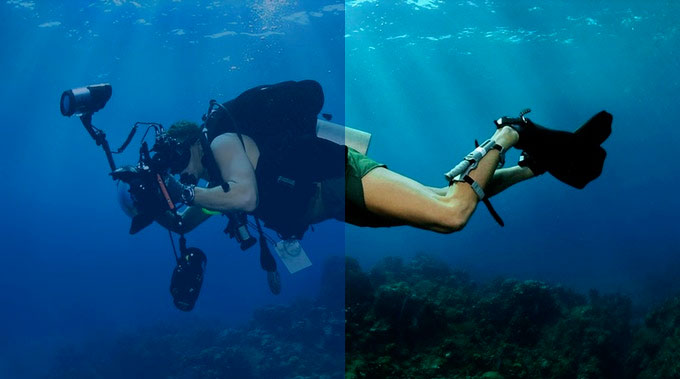 The drone also offers 1080p live-streaming, and in terms of colour correction comes with red and purple dive filters that provide color correction while capturing footage in water at depths of 5m to 21m (15′ to 63′), perfect for fresh or saltwater that appears different color due to algae. Going deeper, the included lighting system, powerful LED lights (3000 Lumens total) on each side of the camera, illuminates the darkest depths of the ocean. Titan’s underside features an accessory extension port that enables exciting add-ons for different diving purposes.

These three projects expand the number of underwater drones made available in recent years, some of them mentioned before here at ProVideo Coalition. For filmmakers and photographers aiming to explore new worlds, this invitation to go underwater, now that the skies are crowded with drones, seems too exciting to refuse. While the capture systems present in these drones are simple when compared to what is available for aerial drones, the potential for expanding one’s coverage of subjects with an alternative point of view, or explore a completely new world, is there.