A recent survey in UK shows that nearly 50% of video professionals have never seen 4K. 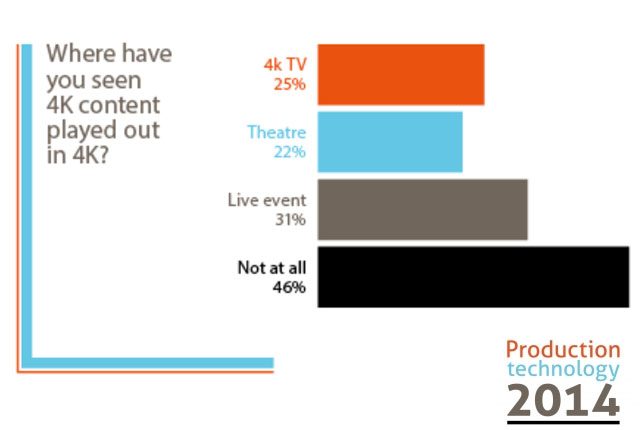 Surveys never give us the complete truth, no matter how unbiased they are, but they somehow help us to understand things better. So, when a recent survey in the United Kingdom that targeted the opinions of 100 senior production staff in the area of video, revealed that nearly 50% of them have never seen 4K played out on any kind of screen, one has to ask if 4K is really the next big thing.

It probably is, but we should never forget, and forgive me the analogy, that DVD is still king, although Blu-ray was promised as the next big thing. And while DVD is still the primary physical format for movie-delivery, although Sony tried hard to push the Blu-ray format with their PlayStation, the truth is that the rise of video on-demand and streaming makes the simple idea of owning a Blu-ray machine uninteresting.

Am I saying, with this, that 4K is not the way to go? No, not at all. After all we're talking about different things. The market of video production, as the photographic, keeps aspiring for higher resolutions, even if, sometimes, to compress them to a lower definition. On photography people demand  higher and higher resolution sensors, to finally create thumbnails for their Facebook pages… and on video we're looking at people filming – or wanting to – in 4K, simply because it seems to be the trend, and many times to create videos that end on YouTube. Sincerely, I do not get it…

4K is not going to make you create better stories in your videos. If you're just starting, go with 2K and learn the skills. 4K can be something to use later, when your notion of video is better. The actual Full HD (2K) will be more than enough for now, and it will guarantee you've an audience, as most people only have Full HD and, some, HD Ready televisions at home!

Now, as with higher resolution sensors in photography, there is a good side to 4K: you can also crop and recompose from the original capture, and that's something that people like Vincent LaForet and Philip Bloom – to mention names you know well, but I could give you others – have mentioned over and over. Having a higher resolution image to go from when editing, gives you more options, both creatively and technically. But there is a problem on the viewers side: it will take some time for people to have 4K TV at home.

That's something that the survey from Televisual reflects.  The 100 execs work at some of leading TV, film, commercials and corporate production companies in the UK such as Atlantic, Boundless, Casual Films, Company Pictures, Endemol, The Garden, IMG, Kudos, Leopard, Leftbank, Lime TV, Maverick, October Films, Princess, Rattling Stick, Raw, RDF, Ricochet, Sunset & Vine, Tiger Aspect, Wag TV, Windfall and World Television, achieved a consensus: it will be 5-6 years before 4K is commonplace in the home. So, why shoot in 4K?

Well, because besides the aspects mentioned above, it looks simply fantastic… in the right viewer. That's probably one of the reasons why many of the professionals that participated in the survey haven’t yet seen it. And this confirms that 4K has still got some way to go before it’s mainstream. Up to six, years, according to the survey from Televisual, as mentioned. Still, some 23% of the respondents to the survey say they have shot in 4K over the past year, on cameras such as the Red Epic or Sony F55. 33% plan to shoot in the format next year.

The complete survey is an interesting document to read through, also because it covers other aspects that are important not only for people working with video production, but also for the general reader and user.  For example, “Canon emerges as the most used camera brand in the Production Technology Survey, with 42% using their models in the past year and 30.5% hoping to in the next 12 months. Canon’s C300 is, by some margin, the most popular model, cited by 22% of all respondents as the model they used most frequently, while 16% say it’s the camera model they most hope to use in the next 12 months. The majority of respondents say that Canon cameras are excellent value for money, while image quality and build quality is very good.”

The survey also presents data on subjects as “The top editing, compositing and grading systems” and “The cloud and digital workflows”, with some interesting revelations that may help readers to define their next steps when it comes to video production, archiving and distribution. Visit Televisual pages dedicated to the survey.

One last word, and this is something that Vincent LaForet says a lot, even if not with these exact words: “I love technology, but the more I use it, the more I go back to the craft.” That's really important. The video published here (see above) might give you some more stuff to think about. Watch it!